Endgame! Windblade must discover the truth of the bombing, Metroplex's deterioration, and how it fits together. But with support falling away, time is running out and she may have to give up everything to find the answer. Written by Mairghread Scott, art by Sarah Stone.

Windblade and Chromia retreat to Metroplex's brain as Blurr and the others try to buy them time. Metroplex continues to worsen, until Windblade is left with no choice but to interface directly with Metroplex's mind when Starscream forces his way inside the chamber. Connected to the Titan, Windblade uses Metroplex's defenses to protect herself and Chromia. Discovering Metroplex's space bridge activated, Windblade searches Metroplex's memory for answers, and is shocked by the truth... 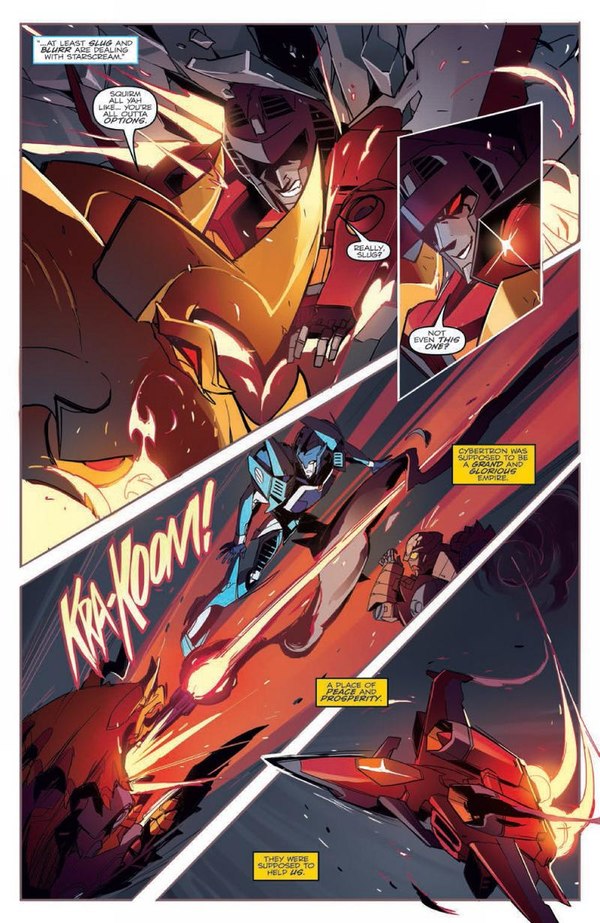 It's time to wrap up and explain the mystery. The outcome was a bit of a surprise, but since we had a pretty small cast and one issue isn't enough time to introduce a complete wild card, the possibilities were always pretty small in number so I'm sure some portion of the readership guessed at least the identity ahead of time. But like any good mystery, even if you can see the ending coming, it might matter more if the path to that point and the reasoning that led there make sense internally and are handled well. And with the answer in mind, going back over the prior issues it pretty much makes sense. I say pretty much because it feels like the motivation precedes the event that motivated it originally. Sort of a plot paradox. But if we loosen our grip on the details, the character-level reasoning is sound and has basis in what the story has already shown us. There's not an answer coming out of nowhere to bail the plot out, this was always the ending and you can find the groundwork if you look for it.

The sequences of Windblade connecting with Metroplex's mind were ...maybe a bit of a let down. The dialogue makes the process sound like a massive risk, but in practice that doesn't come through. The clearly stated risk of death for Windblade and the more implicit danger that it could overload her own mind... just kind of don't happen at all. There's a vague impression of her mind beginning to fall away from her individual self, just a little, but that's pulled back just as quickly and with no clearly indicated effort. It's really the weakness overall because we're shown this new ability and aside from some spoken reasons it shouldn't be done, we have no real sign of negatives to show it shouldn't, nor results that would say to not try it ever again. While the conclusion to the mystery was natural and consistent within the story, the merging comes across to me more like a convenient plot device. At the very least, it needed to have some kind of presence in earlier issues to validate its use at the end.

Character-wise, we're doing pretty well. Windblade and Chromia have a really good, natural dialogue pattern with each other that much of the issue stands on. Starscream is again realized very well, and with just a little more complexity than seen before, going as far as expressing what looked like genuine concern for the inhabitants of the city at a critical moment. And this issue comes down to being just about the three of them for a solid chunk, up until the end where the mystery is solved. It's really good stuff all through, and I particularly like the contributions this miniseries has made to the character of IDW's Starscream.

A particular bit of praise I want to throw on the art this issue sees Starscream's swords - clear, amberish plastic on the toy - rendered as being glowing. An excellent choice, but the swords are pretty consistently also then used as light sources, casting a distinct dull glow against Starscream which changes between panels with the positioning of the swords. It's a subtle thing, and I didn't pick up on it in the first read through, but it makes the quality of the scenes richer with that extra bit of environment lighting that you might not notice you even miss if it wasn't there. It takes me back to the first issue where environment lighting was such a strong element to the artwork and helped set the title apart from everything else. "Event lighting" is a huge part of the way the art is handled this issue. With everything playing out at night and partly in exterior locations that don't have independent lighting sources, a lot of illumination from the bodies of the characters, or their weapons or propulsion systems is used for the lighting. The darkness is sold really well this way, and contrasts the start of the story where the night time city was glowing with life and energy.

The characters remain expressive, and posing and body language is very strong. Everyone moves in a natural way, and emotion is conveyed really strongly. The opinion has been expressed that the art is not quite as polished as the title started out with, but even if that's true, the fundamental qualities that made me love it still remain, and those are what make it work. That has not changed at all along the way, and I'm still incredibly impressed with the work Sarah Stone does in making these characters seem alive. Once more, the only place where this becomes weak are in combat scenes. There are only a couple of short sequences, and going over them a few times you understand the actions, but it's not as intuitive to read and understand as the other art, and it doesn't flow as smoothly as the rest of it. Since this title is not huge on combat (and only had one issue where it was a major factor) it's not a very serious complaint. And the important bit of fighting for this specific issue was clear enough to get quickly which is what matters the most to me.

And hey, it looks like for the final issue we have Toywatch!: Windblade Edition. And it's a mighty confusing one. This issue uses both of its alternate covers for toy art, one for Windblade and one for Chromia, both by Phil Jimenez. And thanks to product photos that were revealed the weekend before this issue's publication, we've got it verified those covers go with the pack in comics for those toys. So the question there turns to whether both toys are coming with this one same issue, or if one of the covers is going to be applied to a different issue in a move we haven't seen since this comic-pack plan started. But if one issue must be shared between them, this isn't the worst choice as while Windblade naturally gets a good deal of attention, Chromia also has enough spotlight to justify it.

So, with Windblade wrapped up (for now!), I have to say I'm very satisfied by this title, and the creative team behind it. Each issue has been a delight to look at with beautiful art very unlike what Transformers comics typically have. The miniseries arrived with this very distinct identity thanks to the art style, and I don't believe the story could have been told as well with another artist on the job. Mairghread tells a good story here, making good use of a mystery plot to build the characters of Windblade and Chromia as well as getting in some worldbuilding for the overall universe. The story read strongly in individual issues, but I think it's going to really shine in the collected format. This is Windblade: The Movie, and I'm looking forward to experiencing it in that format. I'm also really excited in knowing that a second Windblade miniseries is already in planning. Mairghread and Sarah have made this character become a person, and I can hardly wait for their next turn at exploring this individual they've contributed so much to already.