First contact between Cybertron and Earth (as represented by GI Joe) didn't go so well. Second contact is coming... and it couldn't be any worse, right? "I Saw Three Ships" is written by Tom Scioli and John Barber, with art, colors, and lettering by Scioli. 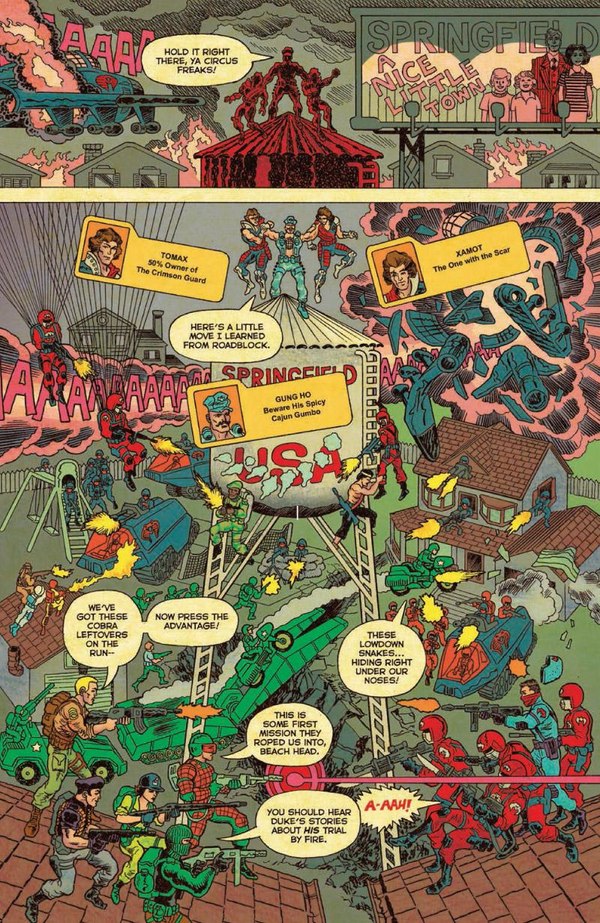 Look at the bright colors, the amount of dialogue, and all the things going on. Love it or hate it, this is what comics used to be like.

As General Flagg tries to bring Snake Eyes back into the fold with good-natured namecalling and abuse, GI Joe successfully takes down the Crimson Guard, liberating Springfield in the process. Destro and the new head of Cobra bide their time... but there's a bigger mission for GI Joe on the horizon. A planet known only as "Cybertron" is entering Earth's solar system, and the Joes pick up a pair of signals they recognize from a battle long ago. They know they'd best be ready to greet the envoy from Cybertron - a group we the audience know as Starscream, Shockwave, and Soundwave.

This issue picks up from Transformers vs. GI Joe issue #0 (Available for free on Comixology) and refers back to it pretty relentlessly. The basics are that Starscream and Bumblebee crash a crucial Joe vs. Cobra battle, resulting in the apparent deaths of Cobra Commander and the Baroness, Snake Eyes becoming disfigured, and Bumblebee's head falling into the hands of Megatron. This issue picks up much later, with Cobra still on the run after that decisive battle. After the accidental encounter of issue 0, this is a much more formal first contact- seeing that it's between GI Joe and Decepticons, you can assume that it doesn't go especially well. The book is juggling a pretty big group of characters even mostly dealing with a single faction from each planet. As could be expected, we get small spotlights on a few secondary characters as the action calls for it and more information about our leads (so far: Duke, Scarlett, and Snake Eyes). Pretty much the same way the old Marvel Transformers comics tended to work. That said, we get some great lines (Spirit's commentary on the Decepticons' titular "Three Ships" is absolutely perfect) and I expect we'll get some more involved character work later on (John Barber is the co-writer after all).

Now let's talk about the art, because it's already put some people I know off of the book. It is, by modern standards, cluttered and clunky and rough- but it's all intentional. Tom Scioli's art style here is influenced by a specfic era, that of the 1960s and 70s - which is why the book is colored to look like it's yellowed. It's an artifact from your father's footlocker, something from the back of the back issue bins at your local comics store. It's especially inspired by the comics of Jack Kirby. Everybody emulates Kirby, or at least the conventions he inspired. Everybody rounds off his rough edges, cleans him up, streamlines him. Scioli has decided to embrace all the discarded aspects of that era of comics. Because friends, Jack Kirby was damn weird. He drew otherdimensional landscapes, tortured machinery, and busy, busy crowd scenes, all in his trademark chunky, melodramatic style. Just as an example: Look at the pages with this article, especially the two-page spread. That is how Jack Kirby did autobiographical/slice of life comics.

Scioli isn't straight-up trying to copy Kirby or do the book exactly as he might've, but he's working from a more raw, more complete take on the visuals that have been filtered and mythologized over the course of fifty years. This is every aspect of comics that comics have discarded as they "grew up": the weirdness, the busy art and talkativeness, the garish and unearthly four-color coloring with (intentional) accidental color bleed. On top of which it is far, far more personal a style than you usually get out of a major comics studio- Scioli is drawing, inking, coloring and lettering a book he (co-)wrote himself. It's practically an independent comic, except using a multi-billion-dollar IP and from a major comics publisher. And the more I look at it the more I love it, because Tom Scioli got Hasbro and IDW to sign off on the most idiosyncratic comic I have seen from a major publisher in years. He is a wizard.

Speaking of wizards, Joseph Colton (the founder of GI Joe, who originally looked like the guy on the left) is depicted in this issue as a long-haired, bearded space-warfare visionary whose visage is surrounded by far-out Kirby Bubbles. (You might be inclined to describe him as looking like a hippie, but I think "hippie" is exactly the wrong word to describe the creator of a spaceborne megalaser.) I bring this up to say: if there's anything about GI Joe or Transformers mythology that you are hold dear, this book may well be jarring. I think that's kind of the idea- everything is new again and we cannot predict anything that's going to happen. One of the things Tom Scioli has asked John Barber to do on this book is keep him apprised of what is and isn't old-hat for Transformers so he can avoid it. He does reference things, especially scenes from the GI Joe comics and cartoons, but he's trying his hardest to use these familiar things in new ways. Everything about this book is designed to defeat the comfort and familiarity we may feel with these stories. Which I like! It's one of the things I loved about Barber's initial run on Robots in Disguse, that the old stories were turned on their head by the simple concept of the war finally being formally over.

Which is not to say that I'm in love with all of the book's narrative or visual conceits. The one that pops up a couple times that kind of bugs me is obscured dialogue. At one point laser trooper Flash's dialogue is overlapped by the muzzle flash from General Hawk and Lady Jaye's weapons. Which makes certain sense since the guns would very likely drown Flash out, but the feeling of hidden information is odd and off-putting to me. Likewise when General Flagg later very literally talks over Shipwreck- it's a neat idea when you describe it that way but I'm not so sure it works in-story. But the good news is that we have a fair amount of insight into why things are happening in this book as Scioli and Barber have a page-by-page discussion of the story- complete with character designs, rough drawings, and unused layouts. I hope this is a regular thing, as I expect this will go places worth discussing.

The best way to put it is this: Tom Scioli is being weird on purpose. And he's doing it with your favorite childhood toys- but they're toys he loves too, and he wants to tell new and interesting stories with them. It's not going to be for everybody for a variety of reasons, and I hope the book isn't simply too far out there to survive. But I'm enjoying it, and I have a tremendous amount of respect for not just Scioli and Barber, but everyone at IDW and Hasbro and everywhere else that allowed and encouraged this book to exist.