Jazz reminisces over his role in the war and the peace as he infiltrates a human base to locate a Cybertronian life sign. Things, of course, do not go according to plan. "Earthfall Part 4: Full Fathom Five" is written by John Barber with art by Andrew Griffith; flashbacks by Guido Guidi and Brendan Cahill. Colors by Josh Perez and Joana Lafuente. 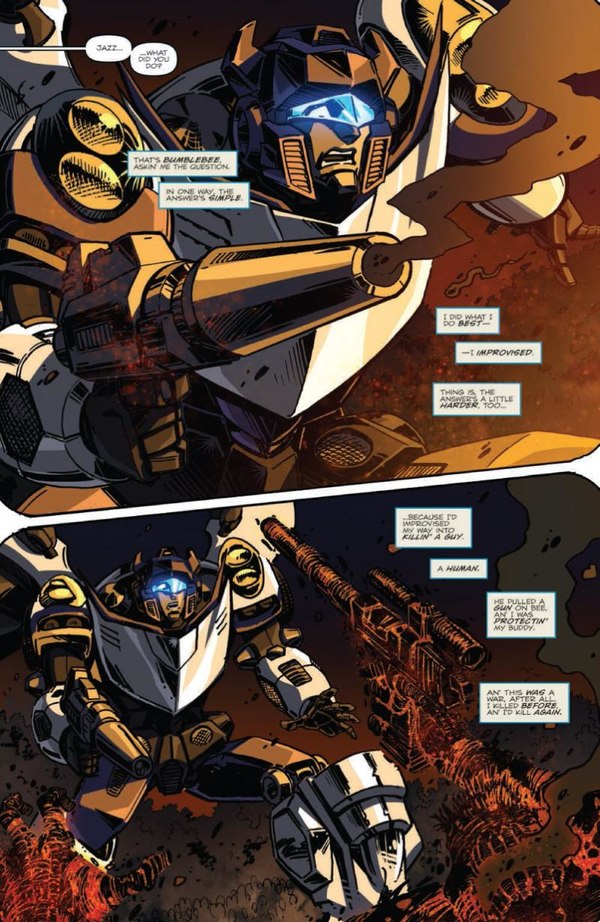 Judicious use of artists in action(!!): Guido kills it(ahem) on Jazz's horrified expression.

Jazz reflects on why he chose to remain in New Iacon when Starscream took over, and how he wound up back with the Autobots as he swims his way to a hidden human installation in the Bikini Atoll. This is the home of the "mind bomb" that incapacitated the Decepticons in the previous issue. Prowl is convinced that the Decepticons are unaware of the signal... which would be true if there weren't a Constructicon on board sending information back to Soundwave and Galvatron. The pair have a little chat with General Witwicky about everyone's future plans, but they're interrupted; both by a flashback as Soundwave explains his version of the Decepticon Dream, and again as the Autobots storm the base looking for Alpha Trion.

Finally we get a concrete answer as to why Jazz didn't stay with the Autobots at the end of Robot Politics, and why he's back with them now. It's a good answer and it makes sense, and it ties all of Jazz's past together pretty neatly. Likewise, Soundwave's flashback explains a lot about where he's coming from, and he seems to be surprisingly earnest in his plans and ideals as stated in the book so far. At least, as far as we can tell. Why that dream would interest Galvatron I have no idea as he is, as we've seen, not the peaceful type. And on that note, Galvatron's response to being incapacitated by his allies last issue is surprisingly restrained, sensible, and yet still in-character. For all his threats- and if he is talking there is pretty much an implied threat to someone -as a warrior he respects sound strategy and judgment in battle. Beyond which, there's some pretty enjoyable exchanges in the book, particularly between Prowl, Kup and Cosmos. I hope we get more of Cosmos in the future- he and Thundercracker serve to lighten a somewhat heavy book.

Art duties are shared once again in what remains a very flashbacky book. Nice as it is to see both Guido and Brendan Cahill in here, I'm hoping the book can live in the present after this initial arc. But Guido, master of styles, pulls off a very John Romita Jr. look to the charred corpse on page 1, to say nothing of Jazz's great expression. And his Optimus Prime looks great as always. In contrast, Andrew Griffith goes a little bit nuts with the vents on Prime's helmets in a couple of panels here and it looks off. Prowl's helmet is also kind of big in a few places here. But to the extent that I may sound like I'm picking on Griffith's flaws he is still rock-solid in his sense of scale, and even his rendering of Marissa Faireborn is improving as well as he settles into drawing human beings again after a very long robots-only stretch. Artwise Cahill brings up the rear, but it's a narrow thing as all three artists do a fine job. My only real objection to Soundwave's flashback is that the scene of Metroplex transforming into New Iacon in the distance lacks any real sense of scale because we're focusing on the talking heads of Galvatron and Soundwave in the foreground. Backs of their heads in fact- which, since they're easily identifiable by their dialogue, wasn't strictly necessary.

I'm starting to think that collected format may do this story arc some favors, but this issue is definitely an improvement over what we've gotten so far in my opinion. We have characters behaving unexpectedly intelligently instead of surprisingly stupidly, so this is good! Besides having an intriguing cliffhanger to resolve, next month is promising another perspective on what's going on, and it's one that will probably fill in some important blanks in the motivation of Galvatron. It also has the potential to give us more of Cybertron's Golden Age as drawn (hopefully) by Guido Guidi. That's something ExVee and I expressed interest in seeing more of for a while now, so here's hoping.