In the ruins of Harmonex, Dead Trypticon lies dreaming... until Megatron comes to wake him. Primacy #1 is written by Chris Metzen and Flint Dille with art by Livio Ramondelli, letters by Chris Mowry. 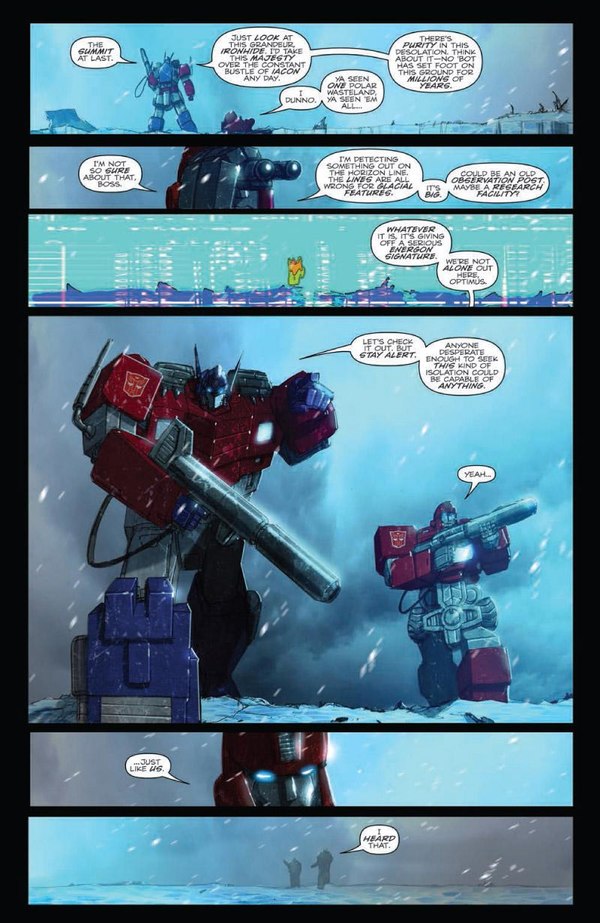 This page has some of the best contrast in the book with its nice, bright backgrounds and minimally-filtered color palette.

In the aftermath of Monstrosity, Hot Rod graduates Autobot Academy and joins Optimus Prime's team, but he's accosted in private by his old friend Slinger who has joined up with the Decepticons. After the recovery of the Dynobots, Grimlock is partnered with Hot Rod. In the ruins of Harmonex, Megatron visits Trypticon- who was last seen being infused with the spark of the Quintesson Pentius -and seeks the use of his strength. And in the polar wastes of Cybertron, Optimus Prime's sabbatical is interrupted by the discovery of a life sign where there should be none...

Unlike the previous two installments in this story, Autocracy and Monstrosity, Primacy seems to be making its debut in monthly comic format. I think it helps- not knowing this on first read-through I went in looking for the chapter breaks and couldn't find them. So scenes have a little bit more freedom to be as long as they need. This picks up right at the close of Monstrosity in the aftermath of Trypticon's rampage across Cybertron, which was stopped by Megatron. Being a dragon-slayer isn't an awful place to start a civil war from. Optimus Prime is recovering from his wounds, and true to his present-day IDW characterization is seeking healing by heading off more or less on his own.

One of my favorite things about the book is the makings of a Grimlock & Hot Rod buddy cop movie, and that's a concept that I'm afraid won't get the breathing space it could manage with in the midst of the approaching disaster that is the war. But maybe it's something somebody will pick up on later, as it could be a lot of fun on its own. On the other hand, this issue brings to a point something interesting that occurred in Monstrosity that I hadn't thought about enough. The Quintesson, Pentius, has a spark. A spark which Megatron used to fuel both himself and Trypticon. It may be having more of an effect than that- which is something I have a mixed opinion on considering the organic (so to speak) nature of Megatron's character development in the IDW books. It opens a door for an argument as for the conduct of his behavior during the majority of the war that I'm not sure I want opened. But the larger question- hinted at throughout -of the role of the Quintessons in the IDW/Generations continuity is the main thrust of the situation. That has some serious potential in the long run seeing as they have only turned up around the periphery so far.

Livio Ramondelli is in good form here, and his figures seem less stiff and simultaneously sharper and less uneven than when I last saw them in Monstrosity. It's looking pretty good, and I feel like the underlying structures and the painted finish are doing equal amounts of work this time around. I do wish certain darker panels had a little more contrast, as you do have to stop and take a good, close look for them to "read" properly. Part of that, I think, is due to the use of filters to give entire scenes a certain hue. I'd actually love to see the art without those, just to see the difference it makes.

Three separate covers for this issue. Livio Ramondelli's is a decent image in his normal style, again veering a little bit into the dark and muddy for my tastes. Sarah Stone's is excellent, and depicts a scene from the book of Optimus Prime showing off the Matrix. Stone plays with light in a painted style in a gentler, less hard-edged way than Ramondelli, and in my opinion is much more successful at it. I may be biased, because her cover illustration is of the upcoming Combiner Wars Generations Voyager Optimus Prime and she actually makes it look GOOD. Lastly we have a cover by Casey Coller with color by John-Paul Bove based on "The Smelting Pool!", issue 16 of the old Marvel comic. It's not based on the original comic cover but on the climax of the book, and it's a really great rendering of a memorable scene. I hope IDW has more such variant covers on the way, because it's a neat idea and a neat premium.

Primacy is starting off stronger than Monstrosity in my opinion. The direction of the story is more interesting, and merely by his history Megatron will be a more interesting antagonist than Scorponok. Plus we have some interesting character interactions going on and some opportunities to add to the IDW/Generations lore. We've got the makings of a pretty good comic book here.