The Transformers: Robots in Disguise #32 - Generation One - IDW Comic Book

In the past, Prowl questions if Optimus Prime is capable of leading the Autobots in to the future, while in the present, Prowl's pursuit of his own ends jeopardize the discovery of Alpha Trion in the custody of the humans. "Earthfall: Chapter 5" Written by John Barber, Art by Andrew Griffith and Brendan Cahill, with colors by Josh Perez and Joana Lafuente.

Having gained Jazz's attention with a gun to the head, Prowl makes clear that Alpha Trion is not the highest priority on the current mission, and the humans must have had access to Cybertronian technology for longer than the few months since Trion crashed on Earth. Having been tipped off by a Constructicon, the Decepticon ship descends to counterattack the Autobot main force moving on the base, handily giving Prowl and Jazz cover to explore on the inside and find the real secret being guarded there. But while an attack from the Mind Bomb weapon gives Prowl direct access to the base's computers, it's ultimately Thundercracker who stumbles in to the truth... 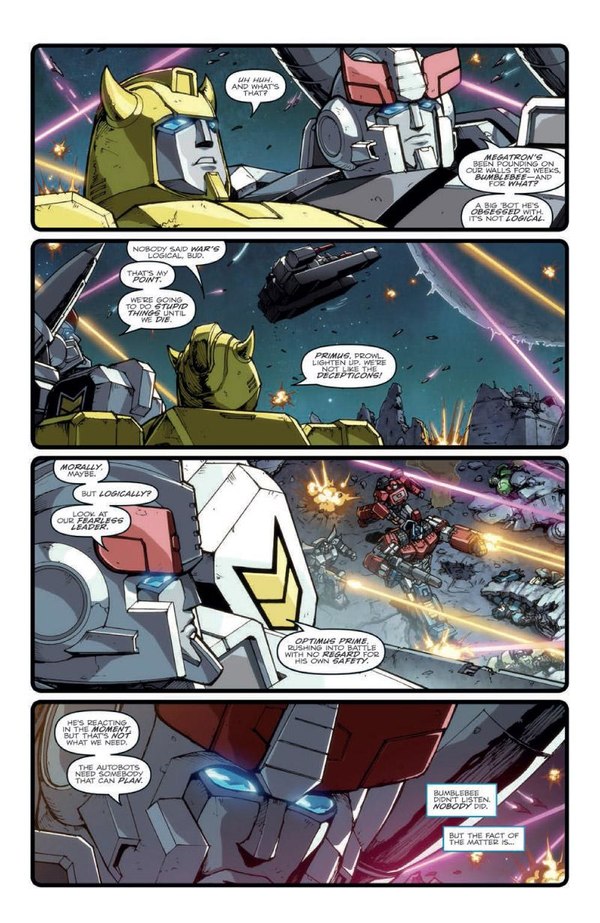 The storyline that kicked off with the launch of "season two" of the main IDW titles finally gets payoff, or at least a wrapup. Having stretched for five issues, the story concerning the location and rescue of Alpha Trion is finally finished, only to inform us that this actually wasn't all that important in the long run after all. The goalpost has been moved out to a greater distance and at least on paper the stakes from here should be higher based on what this issue does reveal. But when it comes down to it, this plot wasn't about Alpha Trion, or the situation on Earth, or the outright laughable human-Decepticon alliance that relies entirely on every featured human being a complete imbecile. This was about Prowl.

In the first year-and-change of Robots in Disguise, the development of Prowl towards increasingly amoral actions that could be reasoned away as being for the "greater Autobot good" was interesting to many people. And when that was all hand-waved away with the excuse of Prowl being mind-controlled, it felt like an utter cop-out and was not a particularly popular move. Barber has expressed some favoritism towards Prowl in the past, and while these issues may not have directly been a way to try to go back to the look at Prowl that compelled a lot of readers originally, the overall effect is similar. The opening flashback - once again to Metroplex leaving Cybertron - has Prowl expressing in no uncertain way that he thinks the Autobots need something more than Optimus Prime can give them in a leader; they need someone with a brain, and whether it was supposed to be his belief at the time, certainly now Prowl sees himself as the only option in that regard. In truth, despite any revelation or set up for future plotlines that may have occurred here, the element that promises to be the most interesting going forward is the development of Prowl vs Optimus Prime, and I will be very surprised if that does not factor in to at least the set up of the Combiner Wars event.

But this pushes us back around to the pacing problems this has felt from the start of this arc. It's convenient this storyline lasted for five issues, since that's the typical length of a trade paperback, and with every issue that went by it felt more and more like the unfortunate style of writing for the trade. None of these issues have told their own story where you could casually pick one up at random by itself. Even though More Than Meets The Eye links each issue to form bigger stories, usually there's enough focused within the single issue to be satisfying just by itself, and I don't see that with RID right now. Anyone can see that Barber has plans in the works, and he has a proven talent for developing a world and making it work. But right now I feel like the focus is too much on getting to the end and not enough on the process of getting there.

On the art side, we have the usual high level work. Griffith and Cahill are a good combination, as there's no sharp difference between their work on their respective pages. You have to study the art and know little signs to look for to tell which artist worked on which page - failing the cheat sheet on the credits page, of course. Some nice splash pages and a two page spread give a lot of very nice imagery this month, and some of Griffith's pages show once again his skill in expressing the relative scale of the characters from comparatively tiny human to complete giants. It's a lot of fun to watch that progression and see these characters of widely varying sizes in the same place together because it's rendered so well. Colors are as good as ever. Joana Lafuente does colors for all of Cahill's pages, and does well to blend in to the style of Josh Perez. Having these pages mostly set in different locations than the rest of the pages in the book may help some to smooth the edges between them, but I feel like it's a great accomplishment to have two or more artists and colorists working on the same issue and not be able to readily identify where one stops and the next begins without some real scrutiny.

On the plus side, next month's issue takes us back to Cybertron to pick up on a plot thread that's been left hanging for a year or more at this point. And importantly the shift in location should hopefully mean none of the characters playing out this opening story arc will be around, so we can catch up with some of the pre-Dark Cybertron cast that have been left behind with the book's current shift in direction.