The Transformers: More Than Meets The Eye 32 - Generation One - IDW Comic Book

The remaining crew of the vanished Lost Light search for clues among its wreckage, but find only more questions, and a single, terrifying answer waiting for them within. Written by James Roberts, art by Alex Milne, with colors by Joana Lafuente.

The remaining occupants of The Rodpod Mk.2 find the unimaginable - the long-adrift wreckage of the Lost Light, despite it vanishing only a short time ago. Megatron orders the ship boarded, and employs the briefly incapacitated Ravage to attempt to track the crew. But when the first casualty is discovered with a fusion cannon injury and Megatron is confronted with the mechanics of a potential paradox, he permits himself and Ravage to be confined for the time being while the others separate to assess the situation. As Ravage demands answers from Megatron, the search parties discover nothing but bizarre, violent death - and Brainstorm's now-empty briefcase. But as more dead are found, the cause of the massacre is quickly reasoned, and it only deepens the mystery... 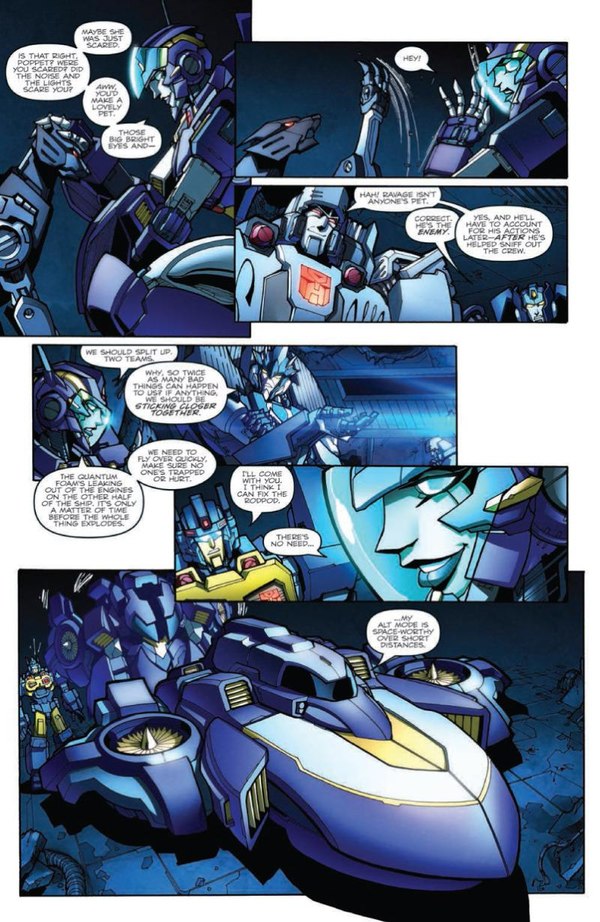 This was intensely creepy. All on purpose, naturally. The characters bring a really believable sense of fear to the prospect of searching their own wrecked ship which only mounts as they find all their friends dead. Thanks to the crafty way the crew disappearances were arranged, we get some good focus on the newcomers to the cast with just enough familiar faces to keep connected to our usual world in this book. Nautica and Nightbeat get a chance to bond, and show off Nautica's entirely-not-a-Sonic-Screwdriver wrench, and in the process do what we've waited most of the book for: open Brainstorm's briefcase. Except it seems to be empty, meaning either that there is someone out there in possession of whatever devious horror Brainstorm once guarded there, or that the contents are rather more enigmatic than that - do note the panel progression among the pages where the briefcase is examined.

The conversation between Ravage and Megatron is necessary both within the narrative for Ravage who was planted without Megatron's knowledge and for us as readers to get in Megatron's head from another perspective, to get the answers that Megatron wouldn't or possibly couldn't give an Autobot. It's probably the most meaningful three and a half pages of story telling to take place inside a dark cupboard you'll find in print. This book makes me write all kinds of new and different sentences! Megatron's responses through the issue keep me enjoying the direction IDW has gone with the character. He doesn't try to assert dominance over the situation or the others with him, and when made to realize there's even the chance that he might be responsible in the future for what happened aboard ship, he voluntarily accepts confinement to keep the rest of the crew focused on the current task, instead of him. The other characters even manage to reflect what many readers are probably feeling as this goes on; the scope of what Megatron has done as leader of the Decepticons is basically impossible to comprehend. Despite his history, it's hard to not be swayed by the Megatron that exists right now and start to actually like him. It's a great bit of awareness of the situation and has to be acknowledged by the characters just as much as we need to have that presented to us to keep context of the situation.

Based on clues spread over this issue, it seems like a number of fans may have guessed along the right track about what led to the current events, though it's hard to not expect to have a curve thrown at us at the last minute and invalidate at least some of it. But if the conjecture is at least heading in the right direction, it would actually tie back to and perhaps resolve a bit of the ending of issue eight, published almost exactly two years ago. I'm assuming that's the case until the book makes it clear that's wrong - the few defined elements at work align to that conclusion, and James Roberts has said more than once that he has the basic story beats worked out in his head quite a ways in advance.

The art is the other half of making this issue really creepy. A dark ship, torn apart outside, trashed inside. The atmosphere is experienced by the reader every bit as much as by the characters, and the entire time you have a feeling of wanting to escape and get back to the safety of a giant flying Rodimus head. ...okay, maybe that's just me, but you get the idea. The remains of the crew are ...um, "distressed"... to a disturbing extent. We were warned that the art in this issue would cause bad reactions with the readers, and that is certainly true. The results are shocking enough, but semi-flashbacks to the events themselves make it even worse. You cannot un-see. The coloring is a real star this issue. Joana Lafuente did great things with lighting to build the feel of the environment. As someone who can barely manage flat colors, this ability will always greatly impress me. A scene in an elevator lit entirely by Nautica's Not-Sonic-We-Swear Wrench has a great feel to it. Other pages where the only source of light seems to be a spotlight from the Rodpod Mk.2 or the Lost Light's emergency lighting is tinted just far enough to the blue end to make sure everything feels cold and make the setting creepier. Art and color comes together wonderfully inside the cupboard (no, seriously, that's where the scene occurs) to cast very appropriate shadows over Megatron and Ravage's conversation. I can't really emphasize enough how much the coloring does to finish the job of the art and make you feel like you want to freak out in this place right along with the crew. And on a final note, unlike previous instances in this universe of non-linear progression, we aren't left to vague color shifts to connect the order - the information we need is plainly present in the art so that you can actually follow along easily. I am so thankful for that.

Though as much as I think this issue was really disturbing, I have an odd feeling from what's revealed at the end that it may in some way get even worse with issue 33. I am further disturbed that I actually cannot wait to get there and find out. And hopefully have some theories confirmed, and more importantly maybe get some suggestions of how this will be resolved. Obviously something like the status quo has to be reached again, but I'm very eager to find out how we're going to get there. Oh, and no Toywatch this time out. Instead of toy art, our subscription cover is a nice Nick Roche piece highlighting Nightbeat, Nautica, and Brainstorm's briefcase. Why, that couldn't possibly have any importance to where this story is going, could it...?