The Decepticons' mission to secure Earth's surrender was a percussive bust. Now it's time for Scarlett and the Star Brigade to travel to Cybertron and return the favor. "Targetmasters" is written by Tom Scioli and John Barber, with art, colors, and lettering by Scioli. 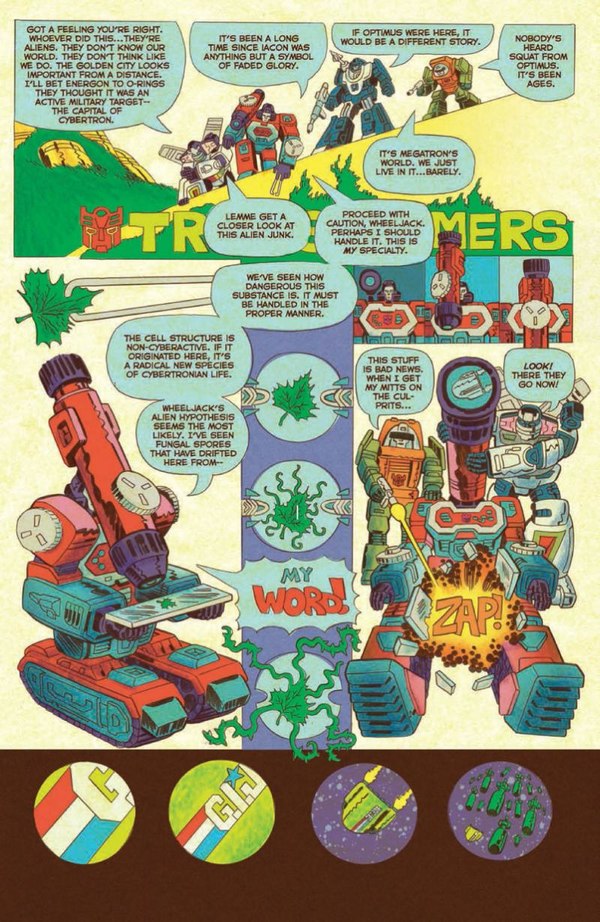 That is one nasty maple leaf. We should be monitoring Canada more closely.

Scarlett leads the Joes on their incursion into Cybertron, which begins with the bombing of Iacon. Unfortunately for them, the Golden City hasn't been a strategically important target for a long time now. Wheeljack, Brawn, Perceptor and Mirage witness the attack but decide to get out of dodge when Trypticon appears. He's followed quickly by Devastator- so the instinct to run is good. But it doesn't necessarily help...

In this issue the Joes do the one thing a military should never do: randomly heft bombs at something that looks important without having the intel to know if it is. Not that there have been a lot of opportunities to gather intel on Cybertron, and I suppose the Joes wouldn't want to risk losing the element of surprise by scouting the place out first. Another interesting aspect is that GI Joe is using a lot of tech lifted from Cobra in this raid, as the Creeper Bombs from issue #0 are used for the Greening of Iacon and the Weather Dominator is referenced. I guess it makes sense, since they do want to dominate a world... it's just that the world isn't Earth. This issue also gives us our first look at the Autobots since Bumblebee's appearance and apparent death in issue #0. The Autobots are a carefully controlled and oppressed minority on Cybertron, and I suspect that after a series of potentially lethal misunderstandings the GI Joes will be welcome reinforcements for their cause. Lastly, we get our first look at Megatron, whose entrance is about what you'd expect.

While the art is still its own thing, some of the Transformers feel a little bit closer to "on-model" here- though the models are taken from a variety of different places. Devastator is definitely the toy, Megatron feels more like the cartoon. Considering Tom Scioli made Earth look exciting and weird last month, Cybertron is pretty much a playground for him. A couple of the standout panels involve Devastator: one is a wonderful closeup on the combiner's eyes and nose as Scarlett sails by on a motorcycle, and the other is of Devastator separating and being halfway between body parts and Constructicons. It's not going to be to everyone's liking, but Hook's arm being Devastator's entire head with a hand sticking out of it just does it for me on some level. It's art with a lot of small details and interesting choices- the kind of art that rewards second and third readings.

I could write more or less forever on what Scioli's doing and why I think he's doing it and why it works- but luckily I don't have to, as the commentary between Scioli and John Barber continues on this issue. (The most telling quote is probably "Making the familiar unfamiliar is one of the lessons I learned from Jack Kirby.") At the same time, this is mostly a look at the book's inner workings and the commentary is not necessary to understand the book. A lot of it is enlightening, and explains the reasoning behind interesting quirks of the comics- for example, when there are only Transformers in a scene the dialogue is automatically translated into English. When there are humans and Cybertronian is being spoken, we get the sine-wave dialogue with translation notes, as you may have already seen. Another thing highlighted is that the alt-modes of the Autobots were intentionally designed to be evocative of their Earth forms while still being Cybertronian. It's good to have a certain amount of explanation on this, as frankly you could just as easily write off the Autobots as being based on their original toys with a twist of Scioli's Kirby-Weird.

We've got a ton of covers again this month. The main cover by Scioli is of GI Joe emerging from the Defiant to face off against the Decepticons, with Scarlett in the foreground. GI Joe and the Defiant interior is a patch of green facing off against a whole world of Cybertron's literally unearthly Energon purplish pink. The next cover is by Scioli's studio-mate Ed Piskor, author of Hip Hop Family Tree, and gives a sharper-edged but still Kirby-tinged look at the Transformers and Joes facing off (appropriately focusing on Soundwave and Blaster.) Next up is Scioli's retailer incentive cover, featuring Joes and Brawn fleeing from Trypticon- definitely a little bit less out-there than his main cover which I suppose is why it was saved for the RI slot. Lastly we've got two retailer-exclusive covers focusing on Scarlett. One is by Jamie Tyndall, a pinup artist in the J.Scott Campbell ("what internal organs?") vein. The other's by Scioli's friend Rob Liefeld, and while it's not my favorite I do like the renderings of Cyclonus and Scourge behind Scarlett. Liefeld's strengths I think tend more towards action scenes like last month's variant cover.

Straight away we're jumping to Cybertron, and the GI Joes now have a presence there. Next issue will likely feature the Autobots and Joes getting to know one another, and that too should be interesting. Even if I got nothing out of this issue beyond the neat shot of Devastator's nose, it would've been worth it. And I got a lot more. There's still nothing else like this comic, and I'm looking forward to where it goes from here.