The Seekers are abroad. What do they seek? Decepticons. Namely, the special teams. Megatron's getting the band back together!Primacy #2 is written by Chris Metzen and Flint Dille with art by Livio Ramondelli, letters by Chris Mowry. 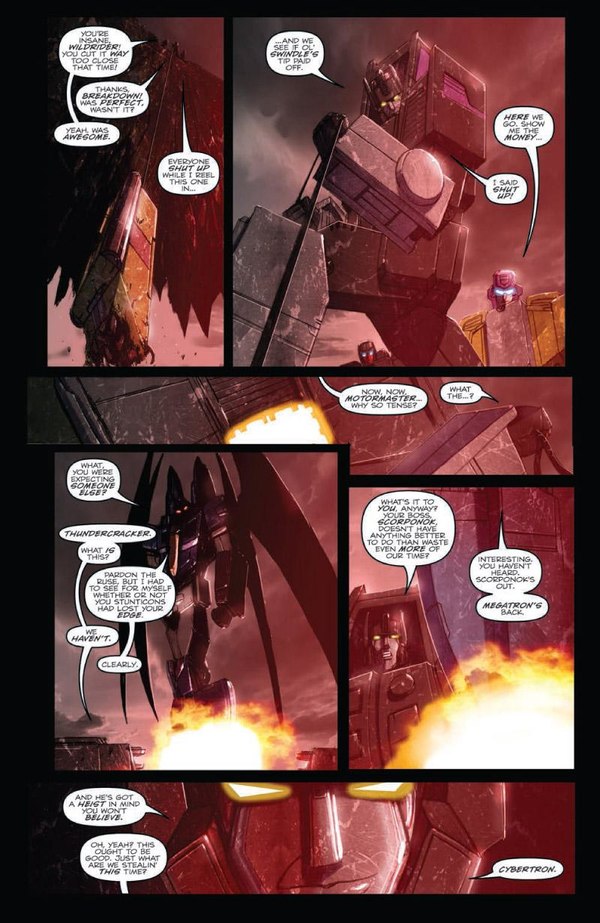 I am digging the Mazinkaiser wings on the Primacy Seekers.

As Optimus Prime tries in vain to help Omega Supreme recover from millennia of isolation, a tipoff about a precious cargo leads the Stunticons to... Thundercracker. Trapped on a world that has recently come to be devoid of delicious life, the Predacons turn on each other until Starscream offers them a more appealing meal. The Combaticons raid the supposed weapons locker of Nominus Prime and also find Starscream. Megatron is gathering his forces so that the war can begin in earnest, and only one stop remains: Junkion.

In this issue the buildup to the great war concludes. In IDW, as with most other continuities, we've only seen the buildup to the war and the aftermath of the world-shattering campaigns. This series promises the actual event, and it's about to begin in this issue. The fight in the second half of the book is a suitably grandiose first act, and hopefully the rest of the series will live up to it in scope. The other thing the book provides is a good look at the group dynamic of the various Decepticon sub-teams, which live up to their traditional characterizations. The Stunticons are violent risk-takers; the Predacons are violent and self-serving creatures who will do whatever it takes to survive; the Combaticons are gruff, all-business and - you guessed it - violent.

Sadly, the one thing we don't see very much of this issue is Hot Rod and Grimlock. I think that has some potential, and setting up their relationship more thoroughly in advance of Grimlock's promised return to More Than Meets The Eye could potentially be beneficial. Hopefully as the war intensifies we'll get more focus on the pair. Speaking of people who could use some focus, another returning face from the previous Metzen/Dille/Ramondelli miniseries: Bulkhead. I'm happy to see him appear in IDW/Generations continuity once again, and I'm hoping he'll stick around.

It didn't fully dawn on me last month, but I'm not thrilled with Livio Ramondelli's Trypticon design. It's the eyes- it's weird to think of Trypticon as having any, and since the influence of Pentius' spark makes the eyes glow pale green, an important profile at the end of the book looks distractingly G1 Grimlock in nature. Otherwise the book looks good, and the increased consistency in character designs and clean lines and shapes that I noted last issue has remained. It's some of the best art I've seen out of Ramondelli to date, and I hope his style continues to evolve along these lines.

First thing worth noting about the covers: Starscream's shoulders on Sarah Stone's standard cover, the ones that look weird and "backwards" compared to the traditional design? That is a very faithful rendition of Livio Ramondelli's Starscream design as seen in the book. Stone's alternate cover is of a more standard G1 Starscream done in her more dynamic style. Both excellent covers, though the standard cover has the edge, and is a beautiful example of what can be made when your colored light sources are actually light sources and not just a tint you apply to the finished scene post-hoc. Ramondelli's main cover - Autobots and Dinobots in the shadow of Metroplex - is a really nice composition that front-and-centers Grimlock and Hot Rod, who appear in two panels in the book. Likewise the convention-exclusive Ramondelli cover shows Grimlock leaping into battle, which is way more exciting than his in-book action of sitting at a conference table and saying a fairly unexciting line. I tend to prefer more representative covers, but I understand the desire of getting Grimlock front and center in the same month that Transformers: Age of Extinction hits home video.

It's been a long buildup to this, whether you count IDW's entire run or just Autocracy and Monstrosity. War is here - Hooray! And with the buildup complete next month promises things to do for everyone who was sitting at a conference table this issue. So that's what I'm hoping for: action, and action that helps build the characters.