The mystery of the ruined Lost Light is solved! But when a way is found to restore things to normal, what will be the price to bring everything back? "The Road Not Taken", More Than Meets The Eye 33, written by James Roberts, pencils by Alex Milne, with inks by Brian Schearer and John Wycough, and colors by Joana Lafuente.

The preview pages pretty much put the explanation out there so I'm not counting it as huge spoilers, but just in case I'm leaving a safe preview page here as space so if you've avoided discussion and speculation about this storyline you can go in completely fresh. 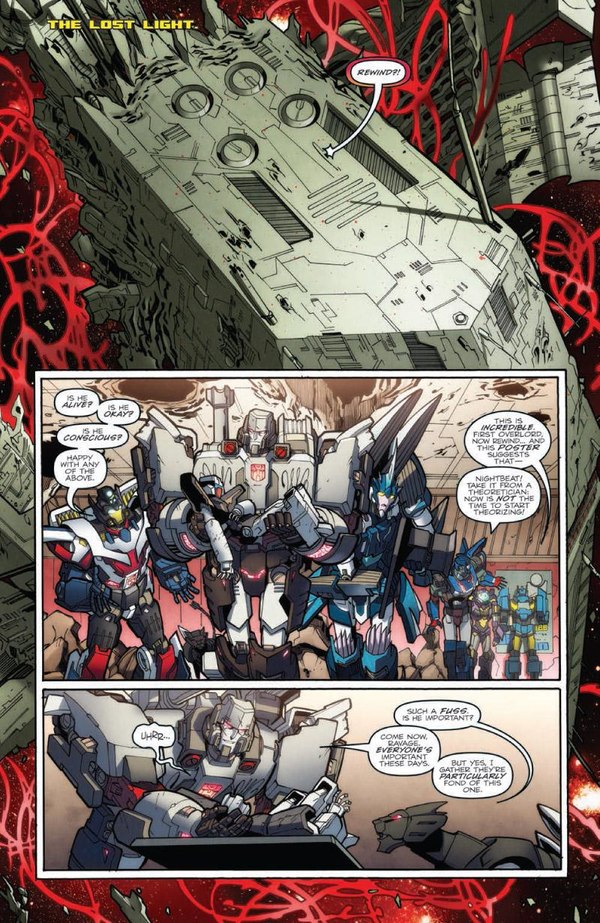 Rewind tries to make sense of the reality imposing itself on his world: an Autobot Megatron, a number of dead Autobots, a female, and a cat. Skids tries to keep Rewind calm and focused on the present, but Nightbeat's instincts override good judgement as he pushes for a recent history lesson. On the verge of breaking down, Rewind hands over a recording to avoid having to relive it all. Meanwhile, Riptide's inability to get a quantum mechanics joke gives Nautica a leap of intuition that explains everything they've seen and experienced so far. And with a bit more consideration, she believes there's still a way to bring back the other Lost Light and everyone who disappeared, but at the cost of Rewind and all else the remains of the wrecked Lost Light.

Someone struck on the theory of quantum duplication being at the root of this storyline very early on, and ever since then most discussion threads have been filled with speculation based around that starting point. I'm pleased to say that I was right on a lot of the counts I predicted, like the Rodimus in the coffin being the result of a less successful encounter with the sparkeater and the quantum engine than the one we saw take place waaaaaay back at the start of the series. The flipside to that means the issue left very little in the way of surprises. However, that's not to say none were had. The issue drops a big bomb on us, so even those among us that were on track and had figured out the mystery could still have something unexpected in store!

I can't knock the issue for ending up explaining everything that a fair number of us already pieced together. Readers without the context of discussion forums may not have reached this conclusion on their own (although clues enough were provided all along the way) and the exposition needed to bring it all in focus will be welcome and hopefully be a satisfying conclusion to what's been a fun sci-fi mystery plot. As I said, clues have been dropped since this started, and I don't believe James Roberts really expected this to run its whole course without anyone connecting the dots in advance. Half the fun in writing a mystery has to be in leaving hints and seeing how many readers can figure it out before the end when everything is revealed outright. The other half is people not being able to work it out themselves, of course. I'm satisfied with the way the Lost Light mystery was wrapped up. It was a neat concept, and something that may even have been a little overdue given the way the world the book lives in has been casually throwing around sidestepping the laws of physics. There's one or two nagging points sticking with me, but nothing so major that a couple extra lines of dialogue wouldn't have smoothed them over to my satisfaction. And there's always the potential for that to happen a little later on. Even if not, it's small wrinkles, certainly nothing to be seriously bothered by. The science is adequate for a comic book, and I'm not gonna pick it apart farther than that.

Megatron and Skids make an interesting pair, really all through these last couple of issues. Skids is playing the role of a moral compass for Megatron, even this time going so far as to tell him flat out that everything he's done since his trial has been worthless if wearing the Autobot emblem has not actually changed his thinking or his behavior in even the tiniest way. We get the glimpses that while Megatron is trying to take a different road, the habits and method of thinking of a Decepticon isn't easy to shake off. But we also see a compassionate Megatron at a couple of points this issue which almost make you do a double take as it's more than a little removed from our standard idea of what Megatron is. There's not a lot of room for dedicated character interaction moments - most of the space is spent explaining and then dealing with the cause of everything's that's been happening, but bits and pieces still get in. One in particular near the end gets by with no dialogue at all, relying entirely on a visual sequence, and it works really well.

This issue, art duties have been spread out: Alex Milne does pencils, so character designs and details are the familiar norms, but Brian Schearer and John Wycough cover inking where typically Milne takes the lineart from start to finish on his own. The outcome is not great. In a way it looks like someone trying to emulate Milne's style, but not being quite there. In a more objective sense, it probably is the result of whatever extra layers of detail and polish Milne would add to his own work at the ink stage not happening the same way. The difference in art is immediately recognizable in this issue, though of course not the same way it would be if there was simply a different artist on from the start - it's a shift, but not a drastic one. And important elements like the posing of the characters or the way panels are laid out are still the same. The credits don't specify who inked which pages, but it seems to me that one inker is better at working alongside Milne's style, because the change in art doesn't become very notable until about halfway through. In the first few pages, I would even believe Milne may have done the complete art himself. There's not much to say as far as standout panels or pages. This issue is concept heavy and probably needed to be a little utilitarian to serve that end. One shot with the quantum drums was pretty nice in use of scaling and perspective, but we're focused more strongly on character shots this time, and on that note I love one panel featuring Nautica, Rewind, and Ravage. But there are some other places where character anatomy seems to turn awkward or downright unreadable - though on that count the situation may explain why that would be the case.

I like in particular that one panel flashing back to an early event on the Lost Light has coloring more like that style, with a slightly desaturated look which I typically described as "hospital lighting". I don't know whether that's coincidence from making the image look like a recording of events, or purposely styled or perhaps both at once, but it seemed like a really nice fit in the context. Apart from that, I think my favorite specific bit of coloring this issue is one really nicely executed backlit panel at the end. The lighting effect brought with the colors fills in the atmosphere and pushes the feeling of the moment across really well. It's barely necessary, but if I was going to ask for a single panel of art from this issue in a finished but clean state, that would be the one.

Our roundup of covers this month doesn't feature anything for Toywatch, but we do get some nice art pieces. The standout highlight is Sarah Stone's 30th anniversary cover, paying tribute to the first season of More Than Meets The Eye. The subscription cover features the DJD and the scales of Decepticon justice by Nick Roche, and a fourth cover is exclusive for Heroes & Fantasies at Alamo City Comic Con featuring Grimlock in his Fall of Cybertron T-Rex mode standing outside the Alamo, with art by Casey Coller. A strong showing all around from the alternate covers this month!