After months offline following having his head blown apart, a newly-restored Wheeljack tries to make sense of the new world he finds himself in, a process made no easier by his "friend" Starscream. The Transformers: Robots in Disguise issue 33, "The World of Tomorrow", written by John Barber, with art by Sarah Stone. 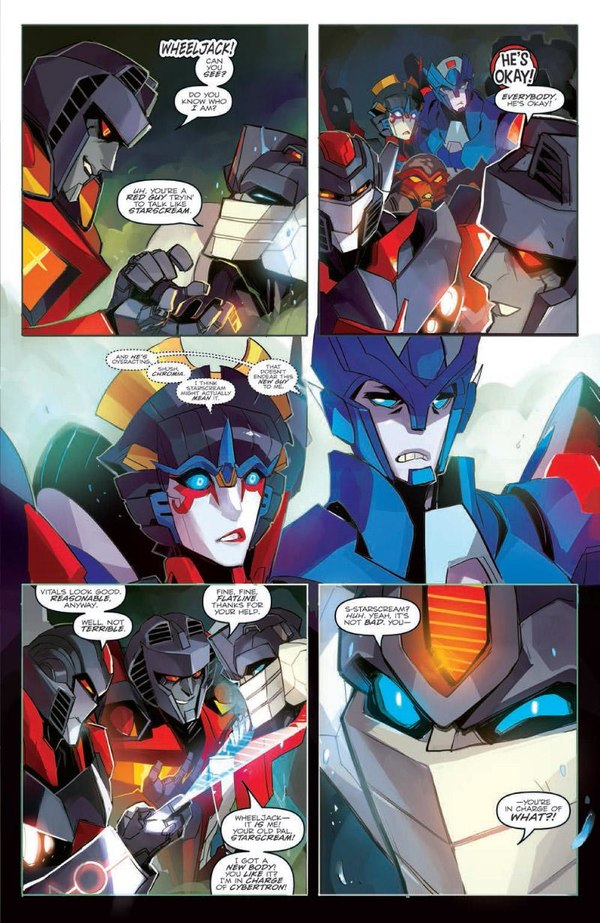 After being salvaged by Starscream, Wheeljack again finds himself in the land of moving parts, but several months have passed since Prowl blew up his head. The world is a very different place, and Wheeljack struggles to make sense of all the new circumstances. But while Starscream seems genuinely happy to have his friend back, he also wants to put Wheeljack to immediate work in an arms race to help ready Cybertron for a war whose escalation he sees as inevitable. With only Starscream's version of recent history to go by and the few old friends still around on Cybertron far from the 'bots they once were, an isolated Wheeljack seems to have nowhere to turn.

For context, we saw Wheeljack in the process of repairs a little under twenty issues ago, early in the holding pattern RID started before launching in to Dark Cybertron. Here we see that pay off (finally) and we follow Wheeljack's point of view on the drastic changes that have taken place. Much as Windblade's first miniseries was done as an easy access point for new readers, this issue feels like a miniature version of that concept. Wheeljack being out of action for all the major events of the past year makes him a good delivery system for a quick catch-up story in a main title for readers that might only have jumped on with the second "season" of these titles. To its credit, the issue gives a good sense of how Wheeljack feels, being thrown in to a version of his own homeworld that's basically alien to him now. Between Prime's mission to Earth and the relaunch of the Lost Light, there's barely anyone left on Cybertron for Wheeljack to go to that he feels like he can really trust. While Windblade offers to be an ally, ultimately Wheeljack's isolation seems to make him easy for Starscream to maneuver towards his own agenda.

The meat of this issue is Wheeljack coping with the new world, and while it follows a solid track and the character movement is credible, it feels a little bit bare bones. The essentials to pull off this story are here, but they're stretched over the length of the issue, where I feel like they could have been filled out a little more to give the book some more depth in the same space. But this issue is only partially about Wheeljack. As the subscription cover might already imply, what we're seeing here is prelude to the upcoming Combiner Wars event, and I feel like the issue has at least as much motivation in establishing some of the necessary ideas for that as it does in exploring Wheeljack meeting a post-Dark Cybertron world. In this perspective, I wonder if Wheeljack's return would have even happened if not for that he would be a useful device to bring us in to these concepts. Suddenly it seems to go from Wheeljack as an interesting-if-basic character study, to Wheeljack as a plot device. I've been anticipating when Wheeljack would get back on his feet ever since we saw that Starscream was having him restored, and I'm glad to finally get to that point, but as much as I enjoyed the story, I wonder if Wheeljack might not have been better served with a return in a different context. Sadly, I think what this issue is going to end up being remembered for more than anything is laying the foundation for an event to come, where it could have easily been taken as Spotlight: Wheeljack in all but name. It only needed the right intent.

Sarah Stone does the interiors for this issue, and I'm really happy to see that. With the main exposure some of the involved characters here have had since season two started being in the Windblade miniseries, it's a nice feeling of consistency to have this setting visited again in Sarah's style. Wheeljack has taken on some characteristics of Transformers Prime Wheeljack, but rather than being a complaint about mixing character identities, I think the aspects of Prime style brought in, especially the influences on the head design really work well. It's hard to praise parts that really caught me without spoiling a little bit, but I'll try to stay vague. Pages involving bigger dudes in poorly lit areas came off very strong. This is no surprise, since a specific thing I've called out with Sarah's art is the wonderful control of lighting to develop the environment, and it's no different here. A two-page splash giving a major events catchup also came out well, except that two frames are supposed to work together to show both Shockwave fused with the time drive and him destroying Bumblebee, but the way they come out it doesn't read as connected and ends up making it look like Megatron is killing Bumblebee. But Sarah's strengths remain so: characters are very expressive, and rather like happened with Waspinator, we see a surprising amount of facial expression from Wheeljack, who has so little with which to work. Other faceplates are made amazingly expressive. A lot of mileage is had with eyes, but it goes past that and you can pretty easily read the faces of people that probably don't even have any. It's just a lot of fun seeing characters drawn by Sarah Stone because there's so much in extended body language and being able to get the feel of a scene without needing dialogue as a pointer. Everything I loved about the art in Windblade is front and center here and I couldn't be happier to see it again!

Ultimately, it's a good issue. While I get some bad feelings towards the way the story is structured when I analyze it in much depth, the elements at work are still handled well regardless of which side of the line you see it falling on. And I've been wanting to see Sarah Stone on interiors someplace again since Windblade wrapped up. Plus we get her doing another anniversary cover calling back to Last Stand of The Wreckers, along with two covers by Casey Coller - one subscription and one exclusive for Giant Robot Comics - along with the standard cover by Andrew Griffith, the composition of which I really enjoy. ...even if Ironhide is a little hard to instantly identify in the one corner thanks to color blending, Ironhide's really generic head shape, and of course Griffith Face. Anyway, best of all to me, this issue functions as a standalone right now, so it's nice to have an issue that's doing its own thing. I was a little more than ready for a break from long form story after that opening arc.