A funeral is crashed on Earth, and the "deceased" crashes back! And a trial within the walls of Metroplex is a mockery of justice. Meanwhile two robot autopsies are planned, one for each planet... only one of the subjects is still alive! The Transformers Vs. GI Joe #3 is written by Tom Scioli and John Barber, with art, colors and lettering by Scioli. 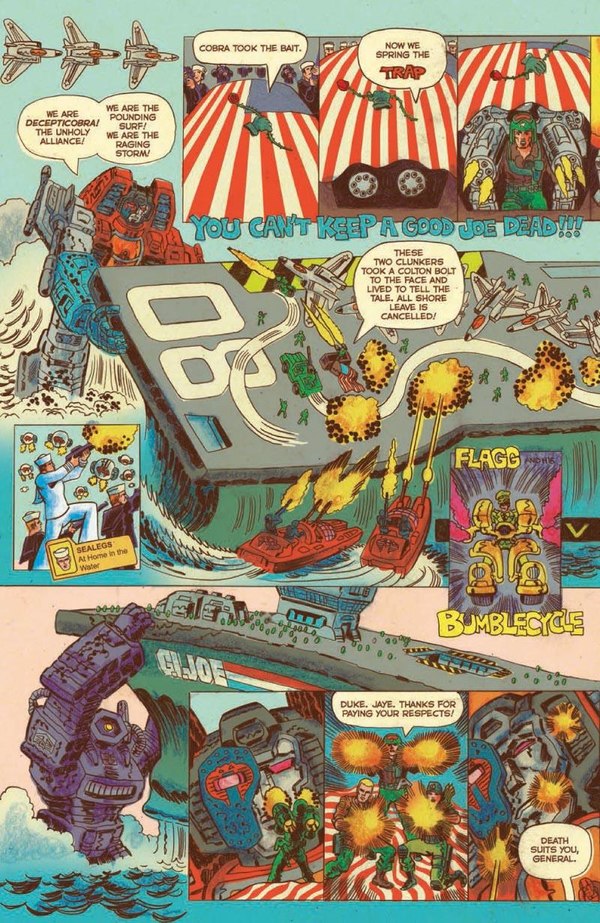 Look at him just throw the Bumblebee Corpse Cycle out there like it's barely worth noticing. And compared to some of the other crazy stuff in this comic that may be true, relatively speaking!

Dr. Venom, "guest" of GI Joe, laments his being kept away from Soundwave's autopsy, instead working on BATs for the Joes. Meanwhile, General Hawk has died of gangrene in a suspiciously off-panel manner, and his aircraft-carrier funeral is crashed by "Decepticobra! The unholy alliance!" On Cybertron, the Autobots' Joe prisoners have been delivered to Metroplex to face the justice of Grimlock. The sentence is Sharkticons. Decepticobra searches for Soundwave's remains while Dr. Venom chooses his side. And after the battle, Decepticobra sends an envoy to Megatron in the form of Destro- a meeting of the metal minds if there ever was one.

Three issues in, I still feel an urge to defend the book and its storytelling choices because Tom Scioli clearly loves some of the same comics that I love and is having a lot of fun with their disused concepts of pacing and structure- but it's not necessary for me to really do that. Between the art and the commentary at the end, it speaks for itself, and it's up to you to decide if you like what you hear. And I do!

This would be a three or four part story arc in other hands, with the funeral comprising issue one, the captive Joes' meeting with Grimlock being issue two, and the aftermath of the funeral and Destro's meeting with Megatron being issue three. No space is wasted and the story is still barreling along at what has to be a dizzying pace for anyone who's never read a comic made before 1990. In this world, Shockwave and Soundwave are brothers, and the latter's death has broken Shockwave's veneer of icy logic. I like that Scioli and Barber are picking up on connections we probably all made as kids - "I wonder why their names are so similar?" - and making something new out of them. On Cybertron we have Metroplex roaming Cybertron to keep the Autobots out of Megatron's grasp, and Grimlock as current leader of the Autobots - with Optimus Prime missing, as mentioned last issue, who else would it be? And the meeting between Destro and Megatron I suspect heralds the ultimate direction of the book- the ways in which man and machine, human and Cybertronian, will all ultimately intersect.

If this all sounds extremely disjointed, it doesn't come off that way in the book. The book gallops, and you're going to be well-served by taking a good hard look at any given page to soak everything in, but it is entirely followable. But it's definitely busy- not a narrative flow so much as a torrent -and I find that in its favor.

By page five we've gone through visual things in small panels that would be the big reveal or the point of a story arc elsewhere- General Flagg's Bumblecycle, just to name one. Metroplex as a mobile city is an amazingly inventive idea, wisely given a series of panels just to fully flesh out the neat weirdness of it. I also like Starscream's blue Cobra half-faceplate; presumably it's an Earthside patch-job to repair damage from Snake Eyes' attack, but it's also a nice reference to Cobra Commander and their shared voice actor, Chris Latta. And Grimlock's Serpentor-like dino-cowl around his robot face works surprisingly well even, as a longtime Transformers fan, as it feels wrong. But the panel that grabs me the most is Destro staring up at Megatron, with Megatron reflected in his facemask. It's an amazing visual that Scioli previewed on Twitter- rightly thrilled with the look of it - and his coloring adds yet more to it.

Commentary remains- hooray! I get the feeling that Scioli and Barber's conversations had to be trimmed considerably to fit, because you could talk about any one of these pages for a long time and not cover everything. But again it provides useful context- and a handy explanation of some regional slang from Tom Scioli's hometown of Philadelphia. Again, I don't feel that the commentary is necessary to understand anything (except for that one bit of slang) but the sense of what Scioli is drawing from in a given scene and how his collaboration with John Barber works are invaluable.

Fewer covers this month, but some interesting ones. Scioli's main cover is of Wheeljeck captured by GI Joe, and it's the best visual of the four. Jim Rugg contributes a subscription cover of an animation-style Optimus Prime fighting alongside GI Joe, and he's got a pretty good sense of the original style of both cartoons. Jamie Tyndall renders Megatron on his throne for Yesteryear Comics, and I think his style of robots is more to my taste than his style of pinups, honestly. Lastly there's Scioli's retailer incentive cover, and that's pretty interesting. It continues the illustration begun in last month's RI cover, and when you match them up it looks very much like Optimus Prime's arm is aiming a gun at Grimlock. A sign of things to come?

After some very bad encounters between all four factions, alliances are beginning to be made. Decepticobra has a jump on that, and an edge in the impending tech-war with GI Joe. But the Autobots and GI Joe may be on the verge of making peace, which should ideally make everything both more and less complicated. Whatever happens next, it should be fast-paced and fun to look at.