A Civil War often pits one city-state against another... but nowhere is that as true as it is on Cybertron. Trypticon vs. Metroplex in Primacy #3! Written by Chris Metzen and Flint Dille with art by Livio Ramondelli and letters by Chris Mowry. 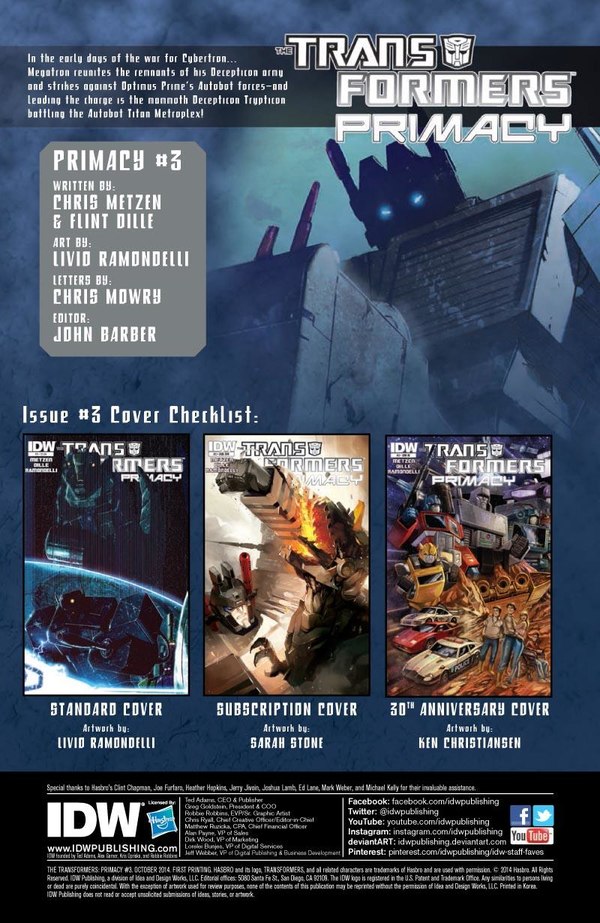 The war is here, as personified by a big black dragon. Trypticon and Metroplex exchange blows and insults, an ages-old enmity rekindled. But Trypticon is only a distraction as the invasion begins in earnest. Optimus Prime has a trump card in the form of Omega Supreme- or so he thinks.

The fight between Metroplex and Trypticon is about half the book, and the rest is the other aspects of the Decepticon invasion of Cybertron. Which, under the right circumstances, could make for good character interaction and allow us deeper insights into certain characters- again, like Hot Rod and Grimlock. But Primacy is more interested in big-picture storytelling here: the story of the war and its feints and tactics. A big picture without a series of well-defined smaller pictures to support it, that isn't really to my tastes these days- but Megatron's planning is at least interesting to see. We're also introduced to one of Grimlock's old gladiatory rivals, and that has some promise.

Again, the book is really not delivering on the tease of the Grimlock-Hot Rod buddy movie I hoped for. Maybe that's something that'll happen in More Than Meets The Eye, but as it is they're far more present than last issue but still not really interacting with each other meaningfully. Neither is anyone else for the most part, although we do get some interesting insight into Omega Supreme and the nature of his service to previous Primes. But the biggest waste are the exchanges between Metroplex and Trypticon. All we really learn is that they have history. No real detail of that history is dropped, and the rest is all pretty generic trash talk that repeatedly establishes that they have history. There is a continued foreshadowing about Megatron that I'm hoping is resolved definitively before Primacy ends, because it's not something I like hanging above his fascinating characterization in MTMTE.

Livio Ramondelli's art this issue is a bit of a disappointment. His use of filters is usually pretty heavy but it's even more pronounced here, and it makes the art look dark. Not "moody" dark either, but "muddy and hard to read" dark. It's like somebody hit Ctrl-A on the entire Metroplex-Trypticon fight and we're watching it through the blue highlight. There are a couple of very striking panels in the book, and on a second read I realized that they stood out because there is no filter. You can see what's going on and contrast is still a thing that exists. On the other hand, there's a sequence where the green filter is entirely appropriate and makes sense for the scene- and it would have a lot more impact if the most of the rest of the book weren't similarly tinted. Beyond which there are spots where the dialogue sees fit to reinforce what's happening in the fight scene- and thanks to the Ctrl-A effect it is entirely necessary. Which shouldn't happen. Beneath the fog there are some interesting visuals- including a curbstomping scene I'm not entirely comfortable with - but the filters make the book difficult and unenjoyable to read. I'm not being sarcastic by saying that the best page in the book is the last one- that's a very clear, bright and readable visual even though it's a major part of the Megatron subplot I'm slightly nervous about.

Sarah Stone's cover is a mirror image of the opening page of the comic, and is better in every conceivable way. The colored light is actual light in the picture with an authentic source, direction, and effect on the surfaces it touches. And her composition makes use of the fact that she's painting a character that is primarily white fighting one that is primarily black. It's a great image, the best art in the book. Ramondelli's cover continues the panorama of Cybertron and the major players of this book- next month's image will doubtless be Megatron. Ken Christiansen's cover is a tribute to the G1 cartoon as part of the 30th Anniversary variant covers that have been happening the last few months, and it's pretty good! I feel like Optimus Prime's helmet is kind of odd looking, but otherwise I like it- the texture reminds me of some of the 1980s ancillary material like the Golden Books.

One more issue of Primacy, and the Dille/Metzen/Ramondelli pre-war stories will be wrapped up. It's not one of those cases where I feel like it's going to be tricky or difficult to wrap everything up neatly; it seems as though it should be a pretty good fit for the time that's left. Mainly I'm looking forward to Megatron's subplot being resolved once and for all.