It's storytime on the moon as Alpha Trion reveals yet another forgotten history of Cybertron to Optimus Prime. But is the intent to help Prime know his new enemy, or is it to ready him for a war still to come...? Written by John Barber, art by Livio Ramondelli. 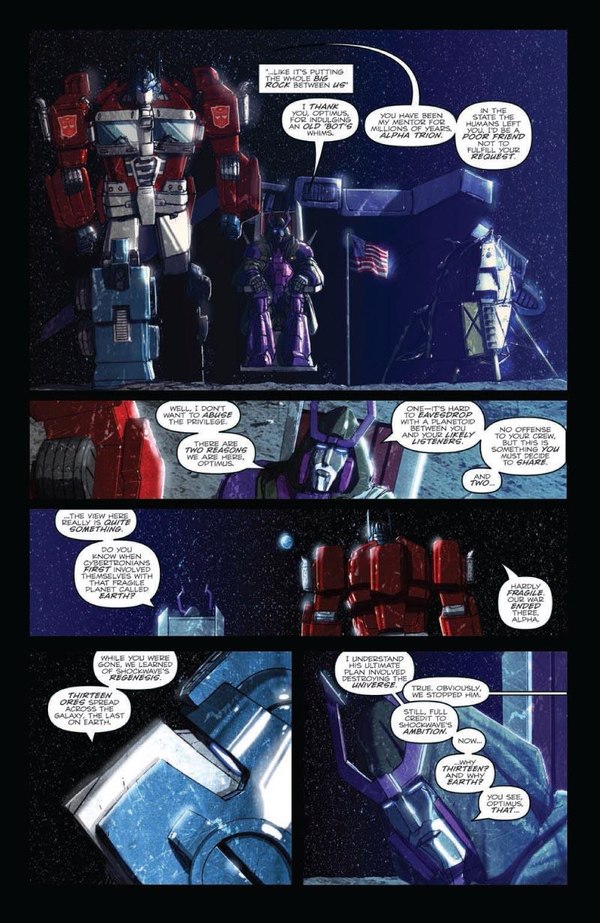 Optimus Prime has taken Alpha Trion on an unannounced trip, leaving only Sky Lynx as a witness to their departure. While the other Autobots try to figure out why Prime would do this, he and Alpha Trion are on the opposite side of the moon from Ark-7. Trion has important information, but like any elderly individual, it cannot be shared without a story being told around it. Alpha Trion thus relates a tale of the first meeting of Galvatron and Nova Prime at the close of Cybertron's age of myth and legend. Trion uses this story to explain the purpose of his travel to Earth, all the while revealing why Earth became involved in the affairs of the Transformers in the first place. But unknown to either, despite putting an entire moon between them and the rest of the Ark's crew, they're being observed...

A sad fact became apparent in reading this issue, that it feels like we're once again in a holding pattern while waiting for the next event to launch. Prior to Dark Cybertron there were several issues that vaguely built up to the events of that but on the outside felt like interminable time killing. Much like issue 33 lays foundations for Combiner Wars, this issue brings in nuggets of necessary set up, but wraps an otherwise uncompelling story around it. One of the Annuals in 2012 worked to develop a new origin story for the Transformers, conceptually similar but separate from what had been the long-standing Thirteen origin. While some mention is given to that, the real world purpose of the story being told seems like it's for nothing but to either reintroduce the Thirteen as an origin, or otherwise try to reconcile them as having also existed with the Guiding Hand mythology. It's never clear what the Thirteen Primes referenced this issue were meant to represent - in-universe that information isn't relevant to Trion's story and so we just don't get to hear it at all. It strikes me a lot that John Barber had a hard time balancing the elements of this issue. Between wanting to bring two versions of Transformer pre-history together and laying groundwork for Combiner Wars, the direction of this story seems like it's being pulled from both sides. Add to it that through Trion's asides we're getting allusions to other things that so far have no other visible basis and come off feeling random and distracting at best.

I can't help but feel like the story presented here would have been served a lot better if not forced to fit the normal series run. Thinking back to 2012's Annual, that would have been a good vehicle for this story. A few more pages to work with, relevant to the main book but not vital to read to keep following what's happening. There's good concepts shown here, and more that are teased but not seen at all. The legendary era of Cybertron has shown to be popular with the reading audience, and a story that's mostly focused on that would probably play well. Instead we're left with a months-long journey reduced to a line of narration, and we go simply from bullet point to bullet point, and it feels like two issues worth of good story got chopped down to one issue of just telling the important parts. Whether or not this was always planned as a single normal issue, there's a loss of potential here, and it's really obvious reading the issue. That I think hurts it the most. In story telling.

It is also hurt in art. Livio Ramondelli is back with us once again in the main titles. I'll tell you what, it took about five times through before I realized that one of the panels was trying to show a character in mid-transformation - before that I was really confused trying to figure out who this other character was and where they went after that one appearance. Another instance has an image of the end of a brutal battle, and a speech bubble meant to be from Galvatron. But you can't see Galvatron or Nova in that panel at all, only a few distinct pieces of wreckage and a field of muddy blobs with an occasional splotch of orange to perhaps appear as smoldering. Battle scenes border on the incomprehensible, and more than once I had trouble identifying Nova, Galvatron, and Alpha Trion when they were in shots together. This is an issue that might have done well to have art duties split. While I can't say who I think would have best served the ancient Cybertron setting pages, Ramondelli could have been an appropriate choice for the framing scenes in the present, especially given the lunar environment it would have been a good follow through on Ramondelli's use in the Dead Universe scenes during Dark Cybertron by using him to depict utterly hostile locations that might naturally have kind of poor lighting conditions. Playing to people's strengths and using them where they'll have the best effect.

It's good that the important elements of this issue are explained in the dialogue and not really just left to any visual cues, so you can still keep up with what you need to take away from this issue as it fits in to the bigger picture. There were a couple of cool looking panels, and one almost completely managed to break out of the traps that otherwise hold things down. The other is the very last panel of the issue and still has some basic flaws but is a pretty great piece of imagery that is rendered pretty well. My real wish though... we know there's a number of other artists that might be tapped for Transformers when needed, and I wish we could see more of those people get a shot at major interior work instead of having just the same couple of people do substitute art when it's needed. There's a big stable of talent at IDW's disposal - let's see them bring some of it in and give others more chance to shine.

Toywatch! is a bit of a mislead, actually. The main cover by Andrew Griffith shows Rhinox in a prominent position, though this really does not reflect how IDW's Rhinox turns up in the story. Rhinox fits the context given in the issue though, and it's a decently unintrusive way of working another Generations toy in to a story. ...about a year late, but what can you do? Casey Coller's subscription cover is a really nice scene of battle that could be a between-shots look at the events of the issue with Galvatron and Nova fighting off hordes of bestial generics (not to mention giving probably the cleanest look at anything that might have been from this battle). Finally the 30th anniversary cover by Ken Christiansen is a G1 movie derived piece focusing on Galvatron, Cyclonus and Scourge advancing from Unicron, with a Quintesson and Sharkticons present between them and a downcast Optimus Prime in the foreground. Elements visible on the left side make it look like this is either a wraparound cover or part of a piece that will be completed with the subscription cover for another issue - perhaps MTMTE 34 due out next week? The art style is really interesting, seeming like an effort to blend the styles of a movie poster with the coloring you'd see on old back-of-box battle scenes. I honestly wouldn't mind seeing an issue with interiors done like this, at least once!