MORAL CRISIS -- Four Autobots are presented with a damaged Cybertronian they can't identify. Surely they must help him survive, but what consequences will their choices carry? And how will the writings of a much younger Megatron sway the outcome? "Births, Deaths, and Interventions", More Than Meets The Eye issue 34, written by James Roberts, art by Atilio Rojo, with colors by Joana Lafuente. 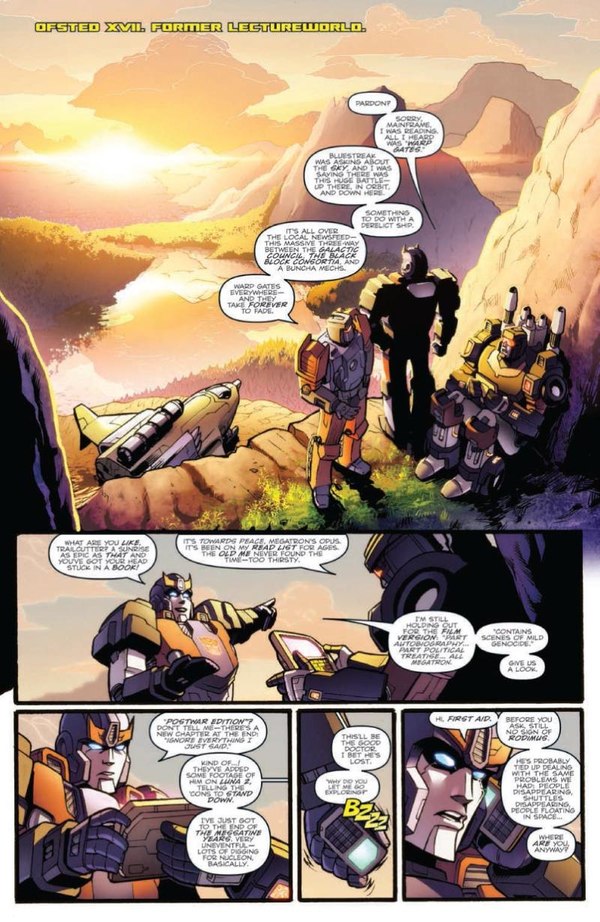 Collectively, Atilio Rojo and Joana Lafuente deliver one of the best visuals in the book. ...immediately followed by a reminder of why Atilio Rojo should not be asked to draw anyone who has Prowl's head.

First Aid, Mainframe, Trailcutter and Bluestreak find themselves on Ofsted XVII, a planet whose orbital space recently played host to a major battle, the effects of which are still being felt on the surface by the planet's native population. The group happens to stumble on a damaged Cybertronian in a ruined lecture theatre. Unable to identify the individual or his preferred faction, the group faces a moral dilemma of what degree of aid to give the stranger, especially as more and more details about him come to light.

In the past, a younger Megatron spends his days as a miner deep within the planet Messatine. Psychopathologist Froid has been summoned to assess Megatron, who has attracted the wrong kind of attention from Cybertron's authorities. As Megatron struggles to keep a damaged coworker alive, he's encouraged to write more, faster, before his time runs out as well...

This issue gives us two stories that have very little direct connection evident between them ...at least for now. The bridging point is that Trailcutter starts out the issue reading Megatron's book, which we see him in the process of writing during this issue. While I can't say how it might be done, I think I'd have liked to see something more solid bringing these two together. The way they intercut feels very much like they're each trying to contribute something to the other, but the most tangible outcome of this is an act of self-sacrifice by Trailcutter later on which is directly inspired by Megatron's writing. If anything, the joining of these stories feels like the furtherance of the effort to say that Megatron's really not such a bad guy ...when you get past the mild genocide, war crimes, general atrocities and such. Trailcutter is another among the voices of the cast that are finding themselves warming to some of Megatron's thinking, and the Megatron half of the story works to reinforce that Megatron wasn't born evil and the things that were held as the basis of the Decepticon way of thinking came about as a result of unjust oppression. The point has become to perhaps try to redeem Megatron by saying that he's the product of the environment that created him, and I'm not entirely okay with that interpretation of things. Megatron needs to be sympathetic to work as a lead character in the context of More Than Meets The Eye, but I think the effort is growing nearer and nearer to a very thin line between making it so that this story direction can work and moving to a point of removing the blame from Megatron for his past because the world he was in made him that way. I have hope that James Roberts won't take things down that road, but I'm made a little uncomfortable by how near I feel we're getting to that already.

As for the present timeline, I'm trying to not spoil things, so pardon the vagueness - this will make more sense after Wednesday when you've had the chance to read the issue. I found the notion of the moral choice required really interesting and I feel like it could have been a good character piece for this group if it had been somewhat open ended. The early part of the issue kind of lays out that this is a risk or reward situation. The reward being that a "friend" has been saved, while they also risk aiding an "enemy" who could turn on them. The characters all have to make choices in the process, and it could be a way to grow Mainframe and Bluestreak who haven't had a lot of time to stand out with this crew. But because there is a black-or-white outcome, we lose some of the page space that could have more deeply developed the ethical question. If the outcome had been more open-ended or grey, it could have been able to wrap in a shorter span and given us a little more depth to the situation. Because while it ended up not being so, this should have been about the way these characters handle the situation they stumble in to. What I think would have been a great story opportunity was lost by essentially coloring within the lines. I don't know whether I think the Megatron side of the story could have carried its own issue, but this one definitely could have, and had time permitted it really ought to have done so. There's so much potential in this idea and it just wasn't able to truly realize any of it.

On the heels of Robots in Disguise 34, Atilio Rojo's art is almost a welcome reprieve. In truth, Rojo has given a pretty strong showing for this issue. While it seems that any head similar to Prowl's remains outside his capacity, as I took longer than I should have to recognize Bluestreak, adherence to established models is much better than has been seen in the past. In particular, First Aid came off nicely. Cartoonishly simplified as it goes with Rojo's style, but looking very right. Trailcutter is a close second in this. But it starts to be a downhill slide. When you get past the few things done unusually well, the flaws start to stack. There's some really awkward proportion and perspective events with Megatron in the flashbacks, as well as similar problems with the Autobot cast in the present setting. Poses go from being mostly decent to awkwardly stiff, seeming to fall to one side or the other based on if the characters had any clear indication of what they should be doing in the script. If they didn't, they tend to look like they're positioned in whatever way stops them from just standing still, whether or not it's appropriate or beneficial to the panel.

That said, one element that came out really well are the facial expressions of the characters. Even First Aid who has nothing but a visor strip to work with is given great expressiveness. Had Mainframe ended up with a bigger role this issue I think he would have benefitted equally with the same absence of facial features. While the body language may have turned out hit and miss, the faces manage to make up for it a lot, at least as far as helping to keep the characters' feelings visible. There are aspects of this issue that leave me wishing it had been done with a different art style, but there are still other elements where I'm happier not having highly detailed art. As being split between times, putting two artists on could have worked to some visual benefit, but I'm feeling that Rojo's art is doing better by standing on its own. In general the backgrounds for this issue are consistent with the cartoon-like look Rojo favors, but the one exception is on the first page with the planet's landscape at sunrise. While it's still simple in style, it's pulled off really well, and is easily my favorite visual in the book. That's thanks in no small part either to Joana Lafuente's colors, which do wonderful things with lighting to bring that scene to life. Some scenes with Megatron in the past have really good environmental lighting, something that sadly is missing later in the issue when other strong, in-frame light sources become present.

We'll swap the installment of Toywatch! this time with just a covers roundup. The main cover is easily the best, an Ultra Magnus portrait drawn by Brendan Cahill. The art itself is quite nice, but what sells it is the added dialogue where Ultra Magnus states the cover's violation of the Autobot Code. It's a lovely bit of character work for an issue that otherwise does not feature Magnus at all. It also has a box art quality to it that almost led me to call this an actual Toywatch!, but I'd suspect that's nothing more than coincidence. The subscription cover by Nick Roche relates to scenes from this issue, as we see Megatron writing in his miner's quarters with the shadow of his future self looming over him. Finally by Ken Christiansen we have another part of the multi cover piece that Robots in Disguise 34 carried the middle of. This is the 30th Anniversary cover taking the retailer incentive slot, featuring many of the main Autobot cast of G1 season 3. This is looking like a really nice piece and I find myself hoping that a complete version of it might be made available at some later point.