As seeds of doubt and distrust are planted, a widening rift pushes Optimus Prime apart from his team. Meanwhile some old acquaintances of the Transformers come out of hiding, drawing the wrong kind of attention from all sides of the secret war on Earth. "Onyx Interface, Part One: Signals, Calls And Marches" written by John Barber, with art by Andrew Griffith, and colors by Josh Perez. 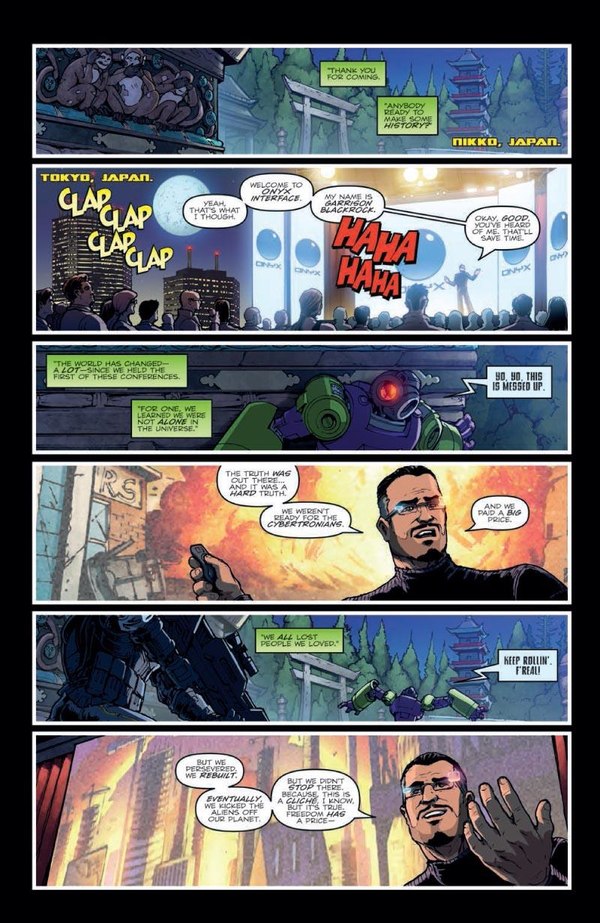 Spike Witwicky and Jimmy Pink crash the unveiling of the Onyx Interface, an all-encompassing software to solve all of life's day to day problems, a presentation being hosted by GB Blackrock. Spike tries to use the event to reveal the EDC's alliance with the Decepticons, and that Blackrock's technologies are byproducts of developing Cybertronian military hardware for them. The Autobots are forced to engage EDC forces when Cosmos is detected performing recon over the remains of the facility at Bikini Atoll. Back aboard the Ark, Optimus Prime finds that more and more distance is forming between him and his team members - his trusted friends that he brought on his personal mission to Earth. Not the least of which is Prowl, who Optimus has to leave in command when he decides he needs to make a short visit to Cybertron to follow up on what Alpha Trion told him of the ancient past and the Enigma. An opportunity that prowl immediately seizes upon to settle his own personal business on Earth.

With this issue we officially drop the Robots in Disguise sub title from the series, leaving it as just "Transformers". But I think given this issue and much of the story focus since season two began, the book could have just as easily been retitled Transformers: Prowl. As I've said with prior issues, a lot of this is centered around Prowl, and the entire storyline we're entering in to here is serving to wrap up one of the things Prowl had to leave behind when everyone left Earth. Whether the entire story arc stays with that purpose is not especially relevant at this moment - we're only in the current situation to pay service to Prowl. And while I find the characterization of Prowl as almost amoralistic in the pursuit of what he sees as being best for everyone else, it's feeling a lot like tunnel vision. Plus with memory of the first year of RID in mind, I can't help worrying that we're being led to another fake out. Prowl's behavior bears a lot of similarity to his state when he was supposed to be under Bombshell's mind control, hand-waving away a lot of behavior. With his ongoing connection with the Constructicons, it seems like we have a ready mechanism in place to get Prowl out of having any responsibility for what he's doing right now if it ultimately becomes necessary.

I think with knowledge of Combiner Wars approaching we can presume Prowl will have a major role in that he's helping precipitate the arms race that will lead to the event. Where we are in the story now may be giving focus to that outcome and in doing is probably going to be a stronger tie in than some of the character build-up that happened during the holding pattern before Dark Cybertron. I think Optimus Prime is another sign of that, but getting far less attention. The trip to Cybertron ties in to Transformers: Punishment which very few people have been allowed to read so far due to a long period of exclusivity on a platform with very limited reach. But in the interim we have Optimus being made more distant from the soldiers that he holds as friends. Perhaps a necessary move if Prowl is to become an outright antagonist; Prime's tolerance of Prowl's behavior as it is defies belief, and makes Prime look ineffective and more than a little foolish for not doing anything to shut him down yet. As long as some of this pays off reasonably I can deal with the road to that point, even if it has to be in retrospect only.

In all honesty I can't find myself caring about the human side of this issue's plot. Shoehorning in more references with GB Blackrock (black rock... onyx... Onyx Interface, get it?) and trying to spin out more complexity in the humans' conceptual war against the Transformers. I say conceptual because with the displayed level of competence here I don't see there being much of a "war" if it comes to open conflict between humans and Transformers. But bringing Spike and Jimmy Pink back in feels entirely like dredging up old assets to tie down and close off old things that probably didn't really need to get this much attention, or at least not at this specific point in time. Which again brings us to the feeling of a holding pattern while waiting for "real" stories to kick back in. Crossovers needn't be inherently a bad thing, but when one component has x amount of material to move through before being set up, and the other title is obviously killing time, you're not necessarily endearing readers to the concept, in my opinion.

With Andrew Griffith back on interiors this month, robot action is well handled and easily read, and the air battle sequence is actually pretty cool in general as it flows from point to point. In these areas there's nothing to complain about. But Griffith's humans are still on the awkward side, and there's a lot of page space given to them this issue. He does largely okay with it and unless you're especially sensitive to such things (in which case comics in general may not be for you) they're not going to look weird or bad. There's just an off-ness about them a little bit which we've talked a little about in previous issues. It's the most notable weakness, but given Griffith's skill shown everywhere else, if the humans are sticking around for a while still I have no doubt that they will be looking better and better every time he goes to work on them. As far as the coloring, I was getting ready to comment that environmental lighting seemed a little bit lacking. As in, scenes weren't carrying the colors they seemed like they ought to given the light sources present. But a portion near to the end kind of turns that on its head by having the scene mostly lit by a video display, and while it's a white light source so the colors don't shift, there's some really lovely shading work on the characters being lit that just comes out so well that it's hard to stay with my nitpick from earlier parts of the issue.

The direction Barber seems to want to take Prowl in interests me, which is motivating me to try to give this story arc some room to move. I hope that the next part of it actually makes some good use of that though. This part was buried in setting up the situation, and I'm concerned that it may not get enough chance in its remaining issues to play out satisfyingly. Tune in next month!