Megatron has bombarded and stormed Iacon, coated the city in acid rain, incapacitated Metroplex, and attacked Omega Supreme. Now, it's Optimus Prime's move. The tide turns in Primacy #4! Written by Chris Metzen and Flint Dille with illustrations by Livio Ramondelli and letters by Chris Mowry. 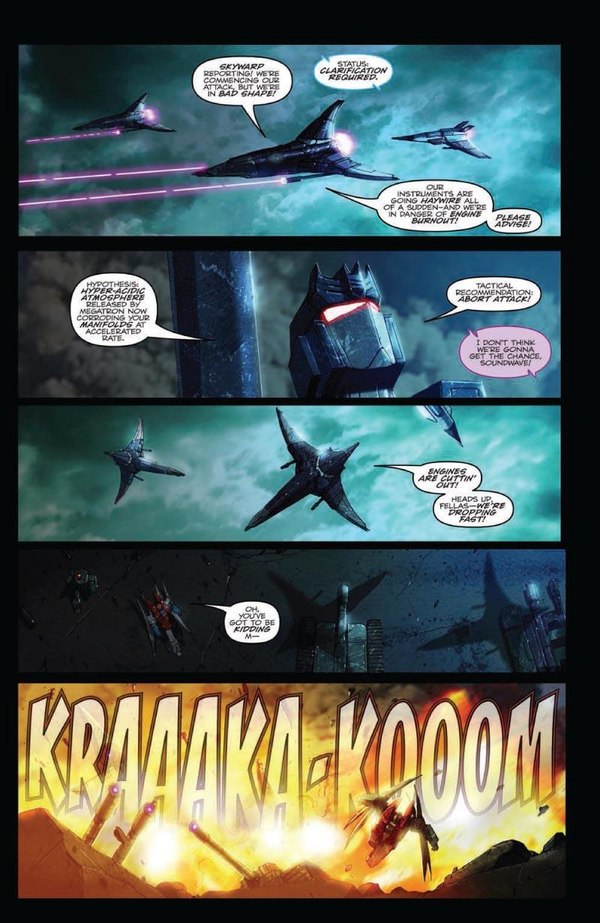 Really? Nobody realized that the fliers would be susceptible to the acid rain? That didn't come up in the planning stages?

While it looks like the Decepticons are winning the war, Megatron senses that something is horribly wrong. ...one thing that turns out to be wrong is that nobody on the Decepticon side seems to have taken their own fliers into account when starting an acid storm. Optimus Prime seizes the moment thanks to the protection of Trailbreaker's forcefield and the attack on Omega Supreme having been insufficient. As the Autobots press the attack, Megatron breaks away, towards Trypticon. Something is wrong, and it's wrong with him.

Things get resolved in this issue, but... not really. Which is not surprising seeing that it's a story about the first act in a four million year war. But even the short-term plots don't get great resolution. Grimlock's battle with old rival Blackwall and Hot Rod's old friend-turned-Decepticon Slinger get resolved, and considering that neither has been seen outside of the Metzen-Dille-Ramondelli prequel books, those resolutions will probably not be too much of a surprise. The resolution to Megatron's subplot is more or less as I hoped, but a line by Optimus Prime immediately after puts a punctuation mark on the fact that the whole thing contributes nothing much to the story or to Megatron's character. Which, again, is great, because having that plot point remain an issue throughout the war would cast a long shadow over Megatron and invalidate much of his character. But it does leave me asking what the point of that subplot even was, except for its resolution to serve as a temporary stopping point in a war that will last basically forever.

In the final analysis, the promise of a Grimlock/Hot Rod Buddy Bot book also goes largely unfulfilled. They end up working together effectively in a key scene, but this could've been so much more. Like its predecessors, Primacy has been an example of big-picture, cinematic storytelling- and frankly it would be a more enjoyable Transformers film than Age of Extinction was. But comics have the room and the ability to be more than that, to give a better and deeper sense of character and story- and this is really only scratching the surface. Sadly, there's not a lot to recommend Primacy to anyone over any of IDW's other Transformers books, as it's outdone in character development (More Than Meets The Eye), big-picture plotting (Robots In Disguise/The Transformers), and crazy action scenes (The Transformers vs. GI Joe).

Livio Ramondelli is, for the most part, a known quantity. His pictures have a slick, painterly finish- and like many stage acts both good and bad, once you look past that surface you can see a lot of things that ruin the illusion for you. Bulky figure construction, odd perspective and shifting models that gets especially bad on faces, and mood lighting by way of filters that muddy and darken the art. But worse than all that, is that there are some genuinely good visuals scattered throughout the book. There are again a couple of key scenes that go largely unfiltered, some places where the light is sourced correctly, and even scenes where the filter works and adds to the scene. Some of the best panels in the book involve Megatron. In one he's firing his fusion cannon and the light falls across him very naturally and dynamically. And he's also the subject of the panel where the filter- a deep red- just works for what the scene is trying to convey. That's the biggest frustration I have with Ramondelli here: the fact that bits and pieces of the book show that he is capable of much better work than 90% of what we get.

And then of course there's Sarah Stone classing up the joint with the subscription cover. Stone's image is in the spirit of the classic comic book covers, showing not what is in the book but capturing the meaning and feeling of what's happening perfectly. It's gorgeous. I've said it before, but if you buy this book, I really hope you subscribed to it. The second alternate cover is Andrew Griffith showing Springer fighting Wreck-Gar as seen in 1986's animated The Transformers: The Movie. Griffith doesn't often color his own work, and his coloring style and technique here are quite enjoyable. Griffith goes for the worn metallic textures of Ramondelli but accomplishes them by hand, which helps greatly. On top of which he also has a great grasp of light and, as always, composition- I'd like to see Griffith color Griffith more often!

Primacy can at least boast that it did not take the one opportunity it made for itself to totally screw up Megatron's character. In terms of lasting impact or insight on IDW Transformers lore, it has none. It resolves any potential new wrinkles and characters it introduces, and pretty much doesn't tell us anything significant about the characters and the history of Cybertron we didn't already know: there was a war between the Autobots and Decepticons, and things got really bad. And stayed that way for a long time.

Next month, Drift: Empire of Stone takes the rotating fourth-book slot. Guido Guidi is back! And after that we get Windblade Returns, the Combiner Wars tie-in by Mairghread Scott and Sarah Stone. Good times are ahead.