The Decepticons' attempts to steal the Allspark from the Autobots go awry, and the precious artifact falls into an unfamiliar dimension... one where a much more primitive source of life is serving as the prize. Angry Birds Transformers #1 is written by John Barber with illustrations by Livio Ramondelli (pgs. 1-5) and art and colors by Marcelo Ferreira and Nikos Koutsis(pgs. 5-20). 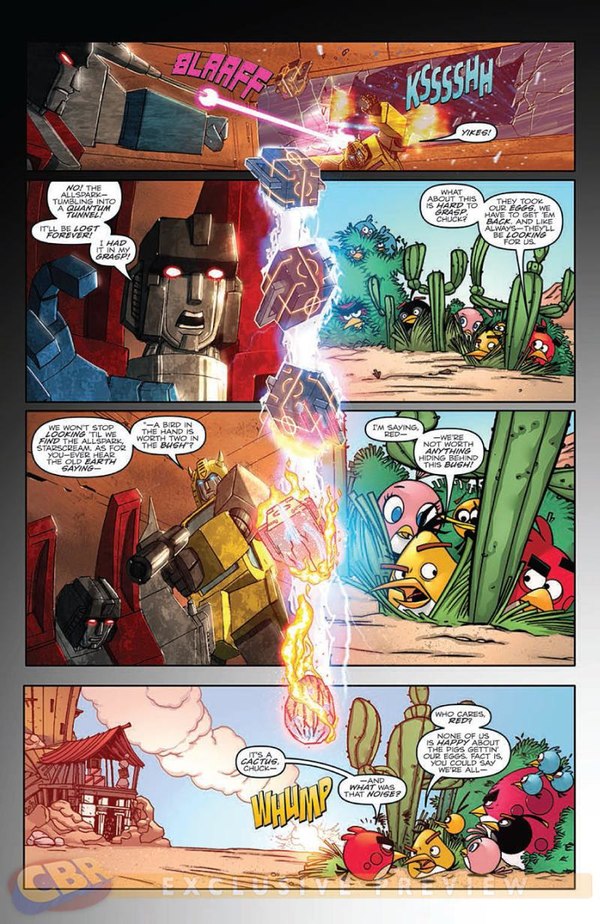 Optimus Prime and his crew pilot the Ark through space, desperately trying to keep the Allspark from Megatron's grasp. Defying orders, Starscream pursues Bumblebee as he tries to hide the Allspark, but a series of mishaps cause the artifact to be lost in time and space... crashing to Earth right in the middle of a war between some limbless fauna. Now known as the Eggspark, robotic life and limb is bestowed on the Angry Birds and their pig adversaries, transforming them into heroic Autobirds and evil Deceptihogs!

It's nice to have a nice, light read sometimes- and that's exactly what this is. John Barber does a nice job of writing for a younger audience without writing down to them, with solid and straightforward dialogue. The first five pages are more or less a riff on "More Than Meets The Eye, Part I," the first episode of the original Transformers series. More current characters are in use and G1 equivalents of Age of Extinction characters in particular- Lockdown and Drift are here (and it's a Drift patterned after the AoE version, no visual relation to the IDW version), as is Heatwave the Fire-Bot. That intro reads like a modern version of the G1 cartoon... which is a comic I'd love to read. Call it Transformers NOW! or something.

The rest of the book takes place in the Angry Birds' world, and reminds me appropriately enough of `80s Saturday morning cartoon material. Which, I'd safely say, means Barber has nailed the tone for this book all in all. It's light fare, moving the plot along but still establishing characters effectively for those of us who have little to no knowledge of Angry Birds. We're not looking at super-deep characterization in a Saturday morning-level presentation of Angry Birds, of course, but the character traits of the Birds are still established pretty well. Also, the next issue blurb is done with two punny alternate titles, Rocky and Bullwinkle style, which is definitely a plus.

Livio Ramondelli handles the Transformers part of the book. The G1-style character designs lend themselves to a lighter, less murky presentation nicely. I wish he hadn't used the golden color of the Ark to filter the panels, because it does make things a bit less vivid than I feel the G1 cartoon should be. As much fun as I think Matt Frank or some IDW's other artists could've had with these first five pages, Ramondelli stands in good, sharp contrast to the art of Marcelo Ferreira and colors of Nikos Koutsis on the Angry Birds side. Ferreira deals very well with both the more organic nature of the basic Birds and Pigs, and the angular and mechanical nature of the Autobirds and Deceptihogs. The art is super-clean and easy to follow, which especially important on a book aimed at a younger audience.

Angry Birds Transformers #1 does a solid job of setting up both the Transformers and the Angry Birds for those who are only familiar with one but not the other. It's fun, light reading with good art, and a comic you can easily give to your kids. That's important- there should be comics for everybody. And as much as I love IDW's other Transformers comics, they're really not for kids at all. So until there's a really great all-ages TF comic again, this isn't a bad alternative.