The reverberations from Brainstorm's jump to the past ripple outward through time and space, but at the far edges the Lost Light is barely aware of the true scope of the effects as they work to understand the how - and how to stop him and undo whatever he's done. "The Custom-Made Now - An Elegant Chaos Prologue", written by James Roberts, with pencils by Alex Milne and inks by Alex Milne and Brian Shearer with colors by Joana Lafuente.

And first a necessary warning: While I try my best to minimize the inclusion of any important spoilers in any comic book review, even situational information from this issue will reveal important elements of the story that should be experienced fully in the context of reading the issue. I will continue to leave as small a spoiler impact as possible, but please be aware that this review will contain some spoilers by absolute necessity. And now to help provide a safety buffer, have a harmless crowd scene page. 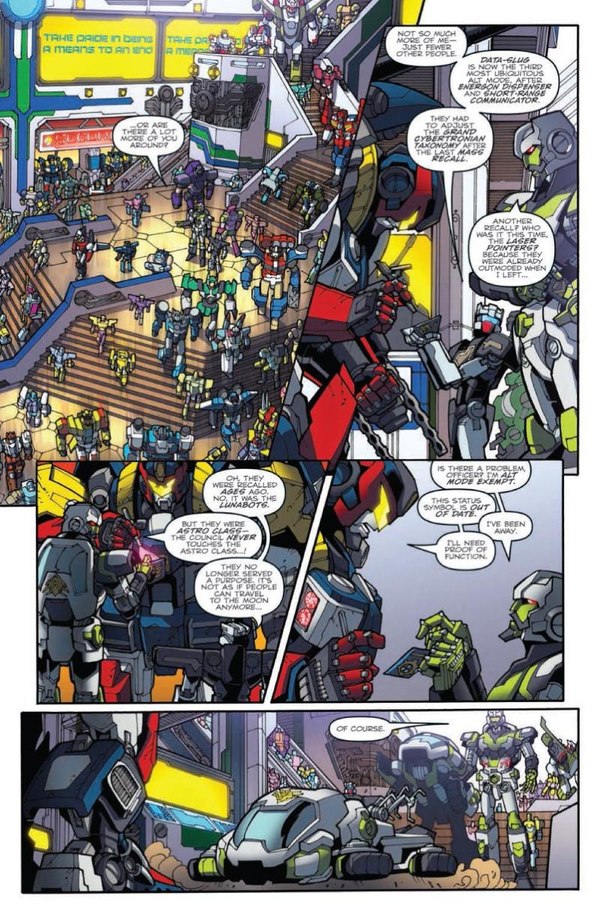 (Ah spoiler space, it takes me back to Usenet days...)

On a Functionist Cybertron, a recently reclassified Research Assistant Rewind greets Minimus Ambus as he returns upon the conclusion of his service with the Primal Vanguard. As Rewind catches Minimus up on the highlights of his two million or so years off world, their check-in is interrupted as an Lunabot-class citizen, recently declared obsolete and marked for "recall" tries to escape through the spaceport, only to be gunned down on the spot while Rewind and Minimus proceed on their way, showing no outward reaction to what they've witnessed. Meanwhile on the Lost Light, Megatron has difficulty accepting the factual details as he's brought up to speed on Brainstorm's departure, but has no trouble guessing Brainstorm's goal by going to the past. But only Rewind has even an inkling of what Brainstorm has done...

With this, we enter one of perhaps the lesser used concepts in time travel, where changes in the past don't affect the future all at once, so in doing we're afforded the chance to see a result while still allowing for the ability to stop it from taking over. In fact, more than a little dialogue space is devoted to making that aspect clear, which is very much needed to help the reader understand why the issue's two settings coexist. In this issue we're given one side of the story that's self-contained, only here to provide a context to the world that's been allowed to come in to existence through the actions Brainstorm is presumed to have taken in the past. As this story is called a prologue for Elegant Chaos, I have no expectation of seeing these circumstances in this timeframe visited upon again. And in a certain way this feels like a repeat on what happened with the Lost Light's quantum duplication in that we're allowed to see terrible things happening to familiar characters with the safety net of it not being "real". But where that was done in a sort of visceral horror - or as much of that as you can have with robots - this is played with psychological horror and it works out so much better for it. You're not having hideous violence shown to you at every turn, you're given bits and pieces of a society gone insane that layer with each other and by the end you feel the same terror as the characters. It's incredibly disturbing, and executed so effectively in just a short few pages. The world is frightening, and you feel it.

The sci-fi science is placed to explain why the Lost Light is still around to talk about the situation, that essentially they're so far away from the center of the changes that it hasn't reached them yet - but it will. This is reinforced by Rewind. He's the focus on the Cybertron side, and thanks to quantum entanglement or something, Lost Light's Rewind is already getting bits and pieces of Cybertron Rewind's memory and experiences, either representing the first swells leading the coming tidal wave, or perhaps even a bit more advance warning than that. But Rewind shows that the changes will catch them, that the "update" is coming, sooner rather than later. It gives urgency, at least from the reader's point of view to what would mainly be non-action talking-head pages as important details are laid down. I'm especially glad that one possible "out" I expected and feared was not called upon, that being some sort of "insulative" effect being bestowed by the duplicate Brainstorm's briefcase and leaving the Lost Light or at least just a few individuals unaffected by the revisionist history in progress. But instead they're only experiencing a delay, not an exemption and that's something I can accept far, far more readily.

On the art side, we go back to a setting I favor quite a bit - developed Cybertron at night. Basically all the exteriors are Cybertron at night, so you get a lot of room for good skylines, views out of windows, and the like. A lot of the backgrounds are larger scale, whole buildings and blocks with very few small, street-level settings. It gives a distinct perspective against something like Shadowplay that showed a similar kind of Cybertron but had a lot more of it be close-in. The predominantly large view kind of helps make everything look more clean, uniform despite design variances, very suited for the world they exist in. The chaos of individual structured is homogenized away by mostly blending everything together visually. If intended, it's an interestingly subtle way to allude to the world we're being shown this month. The one thing I might complain about is some faces looking wrong. Milne has a very recognizable style of face design, and while the framework is there, they're just off in places in a way that stands out. This might be where Brian Shearer contributed to inking and added some of himself to the underlying pencil art, but I can't say with any certainty.

Joana Lafuente is a hero this month though. The night time city lighting is fantastic, with everything bathed in the amber glow of street lighting and other artificial light sources blending together. A room on Cybertron being lit through a window from the city lights outside with little or no interior light sources makes a really good impact on one of the scenes set there. There's so much given with the environment lighting, and parts of the things accomplished by the story wouldn't work without this being done so well. There are other cases of this on the Lost Light, but the Cybertron half is easily my favorite part of the coloring work on this issue. This feels much more consistent than the lighting from last month's issue, and between the two I'm glad this month got such a strong result. This story needs that bit of extra finish just a bit more.

Toywatch! is something completely different this time out. Because there are crowd scenes called for, it's time to get a lot of cameos from toys. Milne dug deep in the Unicron trilogy basket, using designs from Armada through Cybertron, even down to Mini-Cons in order to fill in scenes. There's a bit of Transformers Prime showing up as well, and a couple of individuals from these varied sources manage to get fairly large and prominent appearances. If you get a kick out of detective work, this issue should give a lot of entertainment in the form of tracking down and identifying every background appearance.

Finally this month's covers go from referencing the issue's content, to a nice 30th Anniversary piece by Andrew Griffith recreating the moment in ransformers The MovieTransformers The Movie where Grimlock and Wheelie enter the Quintesson "court room". It's an especially nice piece, and if as the credits page indicates Griffith colored this himself, I'd love to see him color an issue of something some month when he manages to not be busy drawing interiors. The regular and subscription covers both allude to aspects of the Cybertron side of the story, though the Nick Roche subscription cover is probably the least revealing while also looking really impressive with a lot of intricate detail. If you're not lucky enough to score the retailer incentive Anniversary cover, hopefully you can get hands on the subscription variant as it's the easy winner between the two "common" covers.