Dimension hopping! Biomechanical psychedelic drugs! Fortress Maximus eats weaponized housepets! All this and much, much more in The Transformers Vs. GI Joe #4! Written by Tom Scioli and John Barber, with art, colors and lettering by Scioli. 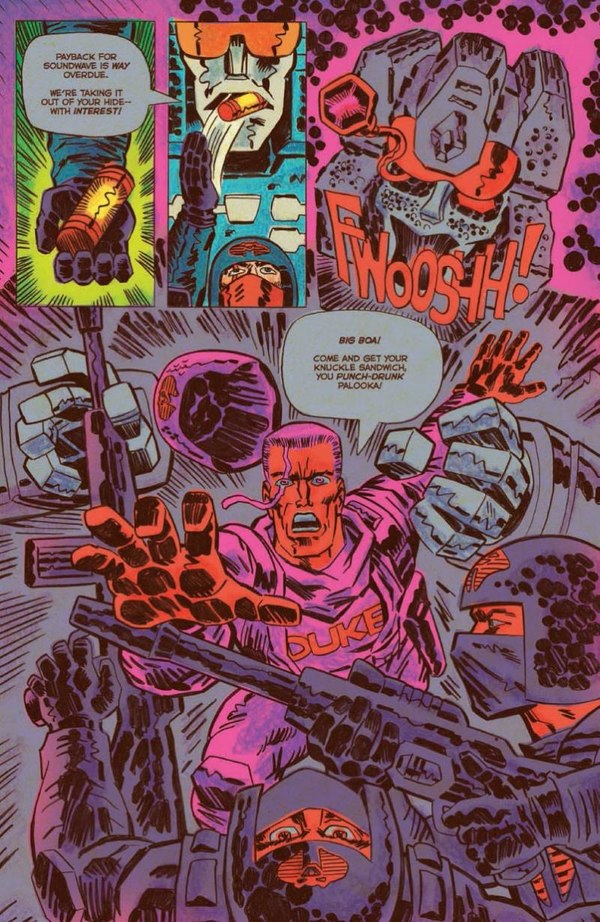 Duke murdering Frenzy (yes, Frenzy) with weapons-grade Magenta is one of the least weird things going on this issue.

Duke's cover was blown between issues, and Frenzy is about to extract revenge for Soundwave when Duke gets the drop on him. Further dispatching Big Boa between panels, he encounters Snake Eyes, and the two take a tumble through the dimensional portal that has killed every passenger to date, save Destro. On Cybertron, a ship carrying all of GI Joe's animal sidekicks - the U.S.7 - runs afoul of the Oktober Guard. Both run afoul of the Living Prison: Fortress Maximus. Near the factory range emerging on the northern end of the planet, a GI Joe team is captured by Hot Rod, who is reduced to working reactor maintenance for Megatron. They're interrupted by an irate Blaster, who is furious with his former leader for selling out. Then, in the Green, Metroplex arrives...

Even for this series, this is a jam-packed issue to the point where it's difficult to process on the first couple reads. (I'm at three now and it's starting to settle in.) The density of story is both commendable and difficult to get used to in a week with the light-reading Angry Birds Transformers and then More Than Meets The Eye, which takes its time to get the most out of every character and scene. Here, a scene lives for as long as it needs to for Tom Scioli to present the visuals and ideas that drove its creation, and no longer. You could take any three pages of this and turn them into an issue of another comic, if not a trade paperback. For that matter, you could make most of an issue out of the things that happen in the panel gutters- Duke fighting Big Boa, for instance. But the book hurtles forward, throwing out ideas as fast as it can and establishing characters who will be important later. (At least one is definitely important next issue.)

By now, anybody still reading should have a good sense of Scioli's style- but we shouldn't mistake understanding the style with knowing what to expect. Knowing what Scioli's art is like and where it comes from isn't going to let you anticipate his version of the Oktober Guard. Nor yet a housecat wearing missile launchers. Even the closest to on-model Transformers we get have some unique twist - Hot Rod's chest flames feature fluctuating Kirby Krackle, as if they were alive and in motion. And as with the story, no space is wasted when there's room for something eye-catching, and everything is there for a good reason. ("eye-catching" is a perfectly good reason!)

The commentary is still here and still a lot of fun to read. It really does help you decompress a bit and think about individual elements as John Barber and Scioli go over the reasoning and decisions behind various elements. I almost wish more comics had these, but with something so unique it's especially welcome. Plus I suspect other comics might use it to shore up lazy storytelling- here, I'm perfectly confident in saying Scioli would not have done a single thing different whether or not the commentary was printed.

Covers this month are solid if not super-inspiring. Scioli's main cover shows how the Joes go toe-to-toe with Megatron and the Decepticons... though a fair number of Joes are facing away from the battle and seem to be trying to draw the reader's eye to Law and Order. The retailer incentive cover continues last month's image and features Optimus Prime, who is pretty solidly his original G1 toy except for the red eyes. Two alternate covers are provided, the first by Riley Rossmo, artist of Cowboy Ninja Viking, who shows the Joes not having much luck trying to tie up Soundwave. And lastly we have Jaime Tyndall once again with the Baroness leading Ravage on a leash, as with the SDCC exclusive of a few years back.

This is probably the most difficult book to review in the world. If you have read any of it, you should know by now whether or not you're going to like it. If you haven't, mere words alone are not going to be able to communicate everything you need to know about it. How do you describe something that defies description? How do you then review that? The most important things I can tell you are 1) that it is all but guaranteed that you will see something in this book that you have never seen before, and 2) what Scioli himself says of the book in the commentary: "I'm not afraid to say it: this is the funnest comic on the racks."