Tokyo is the battleground as Spike Witwicky is confronted by enemies both old and new. As the hunt for the Enigma takes focus, is it really a thirst for revenge that has moved Prowl to pursue Spike? "Onyx Interface, Part Two: VS.", written by John Barber, art by Andrew Griffith and Brendan Cahill, with colors by Josh Perez and Joana Lafuente.

Thundercracker arranges a meeting with Soundwave to try to understand what the Decepticons' intentions are now, and to see how the army of Transformers the EDC is constructing fit in to it. But Thundercracker is surprised when Soundwave seems to know nothing of it, leading Thundercracker to keep the secret to himself a while longer as Soundwave simply promises Thundercracker a welcome in the new home being made for them and that the Decepticons now only desire peace and a chance to have their own society, alone. Meanwhile in Japan, Spike and Jimmy are doing a poor job of going unnoticed, as every other Cybertronian on the planet comes out to greet them. 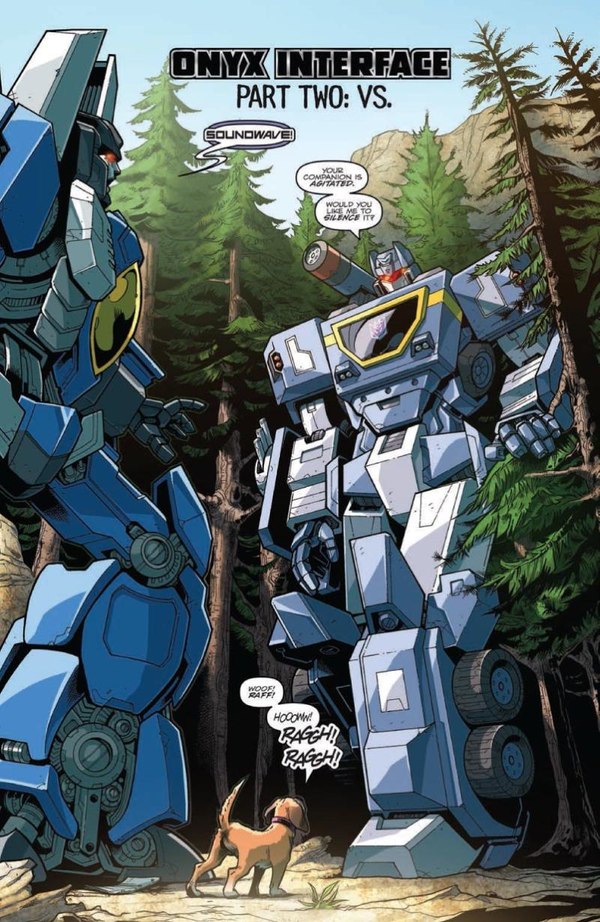 Honestly, the best art of the issue in these first few pages.

The two tracks this issue takes point at different eventual outcomes being built toward. The pursuit of Spike (and less importantly Jimmy Pink) moves forward the plot of the Enigma which is bound to resolve here much more quickly given that the Combiner Wars crossover is now only a few months away. This takes up almost all of issue 36, and while it is important in the nearer future, it's not the element that matters the most. Soundwave's errand which he departed for at the end of issue 35 is revealed to be a visit with Thundercracker, at his request. Though they mostly talk about where things sit with the Decepticons Soundwave is leading, it seems clear Thundercracker really wanted to find out why an army of Thrust and Ramjet clones were being made, the discovery of which sent Thundercracker in to hiding from the EDC a few issues back. This feels like the much bigger thing this issue is doing by laying in more of what the return to Earth plot is likely to pay off at. The incorporation of the Enigma to this is more to get Combiner Wars set up without having to take time away from these story elements by moving the action away from Earth. And what I think we're being shown is that Soundwave has genuine intentions of trying to lead the Decepticons to a peaceful existence, but Galvatron is the one that's right. Because I envision Soundwave putting the Decepticons in to a vulnerable position when the EDC finally moves against all the Transformers because he held some genuine trust in the humans. Where we started out with a move back to Earth that felt like it was abandoning what made the Robots in Disguise title interesting, with this comparatively brief turn in the story I'm suddenly a lot more interested in where this is going to go. The goings on of Soundwave's Decepticons has a lot of potential to be tapped in to for interesting storytelling, and this is perhaps the first really strong indication I've had that anything is going to be done with that side of things. Megatron declaring himself an Autobot opened story doors that I had a great deal of hope for, and while More Than Meets The Eye is doing interesting exploration of what it means for Megatron personally, there's been some lack of substance to how this affected every other Decepticon. If we can grab on to this thread and start following the Decepticon side of things more, the book could go to some very interesting places that would feel like it's once again in the spirit of where the Robots in Disguise title started.

And for the rest of the book we have more Transformers: Prowl. And not even especially interesting Prowl, sadly. Perhaps the most standout moment was a display of "dehumanizing" Sky-Lynx by offhandedly referring to him as a ship, while riding inside of him. Most of the book is an action chase sequence with Prowl and the Constructicons going after Spike, so there's not a ton of meat to the writing on this side. That too may be why the Soundwave/Thundercracker interaction stood out so strongly for me, it was the most dense concentration of character writing for the issue. The end has a twist which I'm sure is meant to be seen as left field and totally bizarre but given Prowl's secondary motives right now actually just seems on point for his typical manipulative behavior and I'll be surprised if that idea isn't borne out with issue 37. Galvatron's gang turns up where all the action is happening too, and does nothing but stand around sort of menacingly. To be honest, this side of the book feels like it went too far with the chase and made no gains for it while only serving about half an issue's worth of story thanks to the room filled in with wordless or near-wordless action sequences. Cutting out chunks of that might have let Galvatron and company feel more important to this issue outside of acting as literal obstacles to hold things up until the rest of the issue's plot caught up to them.

The art is varying pretty drastically. Much of the back half of this issue looks downright rough, a state of things that I'm not used to seeing on this title in normal situations. A lot of the main action in the book is found in the poorer state of things, and while the composition of scenes works just fine, the detail of it is very much lacking in polish. Detail is reduced or just missing outright, sometimes looking like a smaller, simpler figure meant for a background was scaled up and dropped right in front. It's really a shame when there are neat visuals put in the sequences, and one mid-transformation shot in particular is something that I like as the suggested idea but feel like it falls short because of the comparatively unfinished quality of the lines. And I get the sense that deadlines may have played a hand in that, because it looks like a lot of the worse parts of the issue are so because they didn't get additional passes to refine and add detail. The very presence of a second artist and colorist for this issue without the usual mechanism of changing time frames separating the work seems like it supports this theory.

On the other hand, there's some pretty fantastic art in the rest of the book. The entire meeting between Soundwave and Thundercracker looks fantastic, and between the nice character moment and the strong visual side, it's probably the best the issue has to offer overall. I don't want to downplay it or suggest it's not important, because for the longer reaching story arc that's going on, this scene is really meaningful, but I do wish that the elements more specifically significant within the context of this issue alone could have received such strong art treatment. The issue would have been really solid since so much of it is action that counts on the quality of visual story telling.

Joana Lafuente contributes colors for this issue, and she does a really good job in trying to match style to the normal art. It takes a good bit of scrutiny to find the hints to show which pages she worked on and which were handled by regular colorist Josh Perez. In contrast to her work on More Than Meets The Eye which gained more than a little richness to its colors when she took over, Joana might be a bit more muted in color selections versus the typical appearance of the book. But again, the difference is subtle and you really have to go out of your way to find it. For casual reading the two efforts blend together really well.

In covers, we have the Andrew Griffith main cover, representing a chase scene from this issue, more or less. It's also probably misrepresenting the importance Marissa carries for this issue, but that's comic book covers for you I guess. The subscription cover by Casey Coller with Joana Lafuente on colors shows a ...well, rather inobservant Spike who's been somehow snuck upon by a very giant Prowl. This seems reasonably consistent with how the humans in general have been written since we came back to Earth, so I guess that's fine. The winner for this month though is once again the retailer incentive 30th Anniversary cover. Drawn by Alex Milne, it's a kind of worlds collide type of piece featuring characters and iterations of characters from various origins - besides just the prominent Airachnid. This looks like another multi-part cover image which should receive the rest of its portions through the remainder of the month's titles. It's some really nice art and I hope that we can get a look at the original without the brand logos obscuring portions of the image after all the pieces are out. Points to Josh Perez's colors here too, this cover really pops for the vibrant style applied to it.