They're from the future and they know a lot about history - a team from the Lost Light travels to Cybertron's past to protect Orion Pax, the logical target of Brainstorm's plan to change the timeline. But time travel never quite works out how you intend it to. "Elegant Chaos, Part 1: All Our Parlous Yesterdays" Written by James Roberts, art by Alex Milne, and colors by Joana Lafuente.

Rodimus briefs his team - Chromedome, Rewind, Tailgate, Cyclonus, Rung, Riptide, ...and Whirl... - on their objective: Using Brainstorm's time machine they're going to track him down and stop him from carrying out his plan to upset history. It's a mission only they can carry out because they have compatible spark typing to Brainstorm which allows them to use the secured machine. Four million years ago, Orion Pax and his team of renegades battle Sentinel Prime's Elite Guard to protect a new hot spot, the first natural emergence of sparks on Cybertron in a million years. But just as Roller finishes "helping" the last few stragglers out of the area, the Lost Light team materializes inside his cargo container. 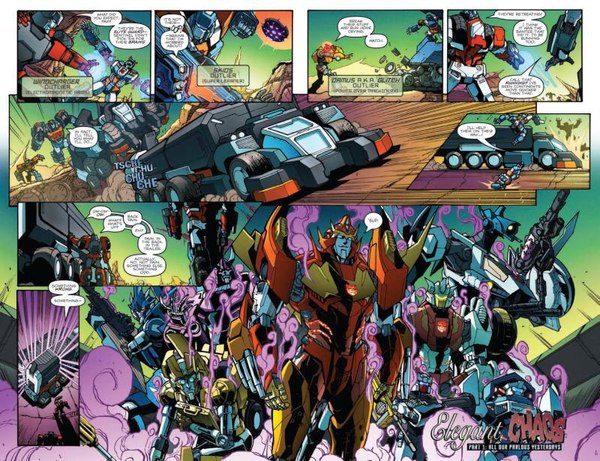 This is a fun and rather simple action story that under other circumstances could act as a pretty neat one-off issue. Apart from relating the basics of the situation and some typical warnings about proper conduct on a trip back in time, the story doesn't put a lot of focus in to the mechanical aspects of things. It's not about how Rodimus and his team are here, and it's barely about why, it's all focused on what actions they have to take because they're here at this moment and that's a good way to approach this situation. It would be wrong to say that what we see going on here is unrelated to the larger story at work. Indeed, I'm positive several elements raised in the dialogue without any particular emphasis are clues that some (or maybe all) of the preconceptions the characters have about things are maybe not outright wrong, but certainly are off in a wrong direction. Until we can see whether the glimpse at the future last issue gave us reflects what Brainstorm truly wanted to accomplish, it'll be hard to pin down just what that's been revealed in this issue actually bears in to the true goals. But I like that. James Roberts expressed some regret that the fans figured out the twist of the duplicate Lost Light so far in advance, and being among those who figured the details out, I feel from my place as a reader how it takes something away. This story so far is still presenting us with clues, but the meanings are more buried and while we can guess at broad strokes, I'm happy if the details don't come in to focus until much closer to the endgame.

But, while this is a stepping stone to the ultimate destination of the story arc, it's a good time in its own right. Fans of Orion Pax: Supercop will be well pleased this month. He doesn't get quite the same chance to action hero as in Shadowplay, both owing to having only the one issue to visit him and having our modern day cast visiting and taking time out, but that doesn't mean he doesn't have a ridiculous stunt or two to pull off before we're done. This issue acts as a quick sequel to Shadowplay, showing us where Orion and his allies from the job in that story ended up in the aftermath. Though they're on the run from the Senate, they're still doing the same kind of work. And in honesty, this does nothing so much as make me crave more Young Orion Pax Adventures in this style. There's a solid cast in his team, and probably a ton of room to work in and create more stories about their exploits. I don't remember exactly, but I suspect I may have said things along this very line at the conclusion of Shadowplay. There's a good concept here, and unlike the Autocracy trilogy I think I'd actually be interested in reading this.

Time travel is a well worn concept in story telling, and this goes outside of the likely expectations by not having any confrontation or even direct pursuit of Brainstorm. If this issue is an indicator, it looks like we'll get a bit of jumping around history and getting quick "episodes" at the arrival points before wrapping things up, and I like this. From what I'm seeing in this issue it feels like we're getting a layered approach and each stop will make clearer the real intent behind Brainstorm's action. I've seen other stories use time travel in a similar way, though not always with a great deal of complexity, but they make up for it in telling fun stories. I think Elegant Chaos will be able to do both, and I'm looking forward to the subsequent issues.

The art is beautiful this month. Alex Milne is doing a lot of two-page spreads this issue - an interesting choice, but one that offers some really excellent visuals. The action scenes feel big and powerful by being expanded in this way, it really helps sell the scale of some of what happens. But the small stuff shines just as much. There's places where body language and facial expressions absolutely sell a panel all by themselves, and frequently in a subtle way that you can pick up on but not immediately realize. But there's also the clear ones, such as the instance with Rodimus and Whirl, pictured below. The dialogue finishes the scene, but the way the characters are drawn here makes it come alive. I laughed for a long time at this on the first read through, it's just a fantastic bit of work. The art just feels generally on target this issue. Last issue had some slightly off bits, and the services of an additional artist to finish the inking, but this one is all Alex and it feels like a significant rebound from where we were last time. If the price of getting this was a little roughness and a fill-in artist for the past few issues, I can live with it for how solid the art is here. 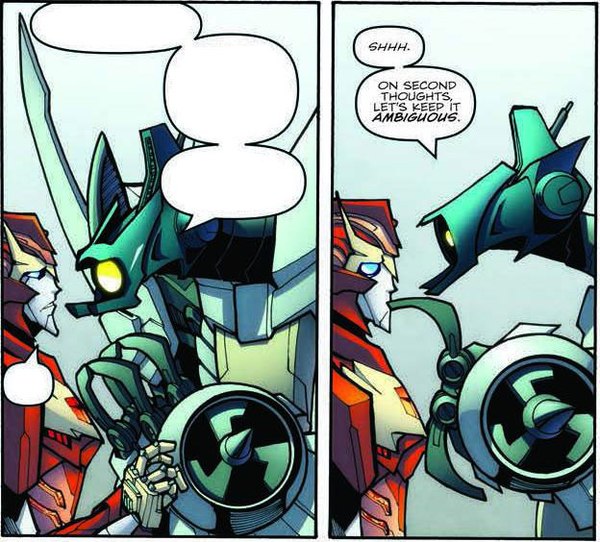 Colors impressed me too, but this is pretty normal. A nice touch is varying the look of the colors between the setting on Cybertron and aboard the Lost Light, making both places distinct from each other by giving a different feel to their lighting. The ship has a slightly washed out, sterile finish, a little like the original color style of the book, while the colors on Cybertron are more rich and saturated. I can't go in to too much detail without giving away more of the events in the issue, but suffice to say that Joana is just as good at creating beautiful lighting effects through her coloring as ever, and she has a great deal of room in this issue to do that.

This month in covers, we have a retailer exclusive cover for copies of this issue that will be sold at SacAnime in early January. Drawn by Tony Fleecs, it depicts G1 Optimus and Transformers: Prime Optimus having an arm wrestling contest. The main cover by Alex Milne and colored by Josh Perez features Roller and his juicebox. The Nick Roche subscription cover colored by Josh Burcham shows Orion Pax sitting in a crevasse outside a city, likely as a bridging point after he goes on the run but has not yet gathered his team together from Shockwave's Outliers. It's a very nice piece, and the dark, moody coloring helps to cement the feeling of the art. Finally in the Retailer Incentive cover we have part two of the continuity-spanning multipart piece. This time we add Animated to the represented series, as well as Beast Wars (and Beast Wars II) and Generation 2! This massive piece of art by Alex Milne remains just as impressive as the first segment of it was, and Josh Perez's colors are fantastic. I'm very much looking forward to the third part - as well as hopefully seeing the clean, original art at some point!