Release Data: Released December 2014 at a suggested retail price of US$24.99.

The Autobot commander has been upgraded with the power of the Combiners, giving him ability to link with any bot to form Ultra Prime!

This Optimus Prime was the focus of a fast one the Hasbro design team pulled on us at Botcon 2014. They announced that it was a new Voyager figure coming soon... but made no mention of the fact that it was a combiner because Combiner Wars was to be announced within a week or two at San Diego Comic-Con. Some people figured it out, of course, but it was an interesting way of handling it. And now, here we are: begun the Combiner Wars etc. As of this writing I have no limbs - Ultra Prime will be a separate review - so how does Optimus Prime hold up as an individual figure? 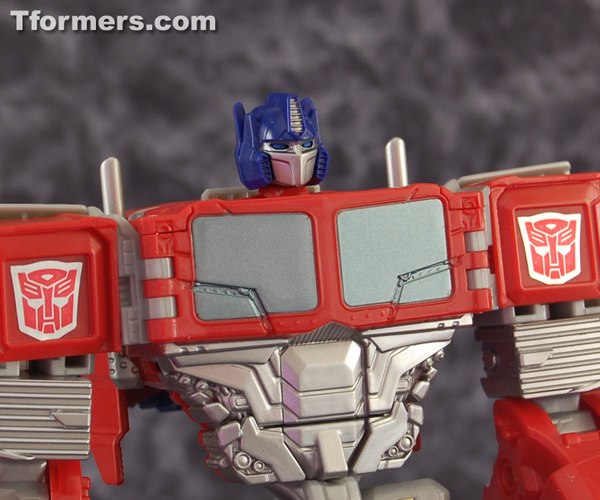 There are two schools of thought on this Optimus Prime's Robot Mode aesthetic. One is that this is an Optimus Prime based on the art style of IDW artist Livio Ramondelli, who will be the lead artist on the Combiner Wars tie-in comic. The other is that this is 1980s Live Action Powermaster Optimus Prime and you need to find a tiny human figure to stand in for Tommy Kennedy. I... can't quite make that leap for the latter. And I'm not much of a fan of Livio Ramondelli, so I'm kind of stuck.

The figure is very flat looking, especially in the torso. Optimus' head has the beady little eyes I've come to associate with Ramondelli. And the proportions are Ramondelli/Dreamwave as well, big and blocky. So, not my dream Prime, and not destined to take the place of Classics Prime as my go-to modern rendition of the G1 character. Things I do like: the addition of silver paint since the first promotional photos, which only used the flat silvery gray that is used on the legs and feet. A little bit of contrast between the torso and legs is nice, even if that possibly wasn't the reasoning. I'd still prefer more red on the flanks. The other nice touch is the use of G1-style foil Autobot stickers on the shoulders. I'm not in love with the use of stickers on Transformers, but when they're applied for me and used in a neat way, I don't mind it.

Besides becoming a torso, this Prime makes up for the not-ideal-to-me aesthetic in sheer size. Brainstorm, as ExVee mentioned in his review and showed in this photo, is taller than most Voyagers going by just head height and not even counting wings. Optimus Prime is taller than that. (Again, not counting wings, but still: tall.) It's also worth noting that while Brainstorm is slender, Prime is very not that. ...well, from the front. Seen from the side, as most Transformers are designed not to be, he looks very flat in the midsection. The necessities of transformation, of course. 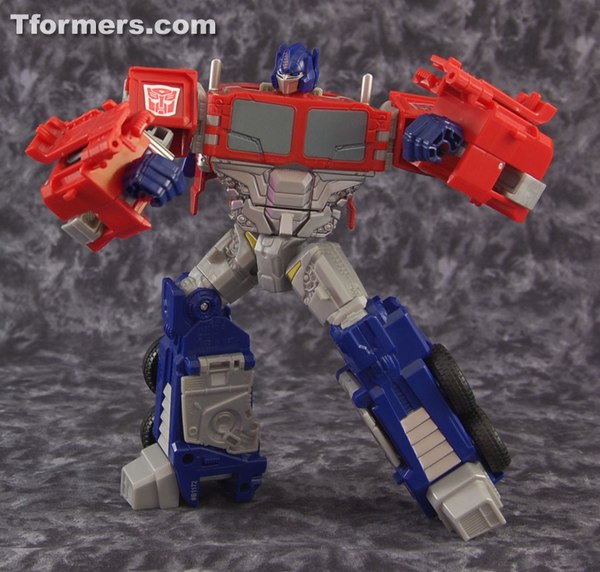 The head is technically ball-jointed but functionally is a swivel. It's even very stiff in that capacity- I've seen some people twist theirs off, which between this and Chromia's elbows makes me wonder if plastic tolerances may be a thing this coming year. Hope not! Where that stiffness is very, very welcome is in Prime's shoulders, which turn a full circle and have no trouble holding a pose. Below that are very strong ratchets which swing the arms all the way out to the sides- and since they're every bit as wide and as square as the red part of his chest, that's kinda weird looking. But again, it's solid. There's an upper arm swivel that isn't as stiff as other joints but moves smoothly. It's actually kind of odd how light the lower arms feel, which isn't just a function of the weight of the plastic but also of how easily the joints move compared to everything else so far. The elbows are double-jointed, but only one hinge does much for this mode. That one hinge does do a great job, allowing you to flex the arm to a right angle which is as much as you could ever hope for from blocky limbs like these. No wrists, but I feel it's worth noting that Prime's fists are bigger than his head. And of course they use standard 5mm sockets like 90% of all Transformers.

Hey, a waist! Haven't seen too many of those lately. It swivels just fine, and smoothly. The hips ratchet on both axes. Forward movement is nice and smooth, but lateral movement is super-stiff, presumably for Torso Mode. I hope the forward range doesn't interfere with Ultra Prime's stability, in fact, but I guess I'll find out once I've got some limbs. There's a very stiff swivel above the knee, stiff enough that you'll need to brace the leg to turn it if you don't want the knee or hip moving instead. The knees are on the smooth side of things, and even feel loose at first, but that's more down to how tight the rest of the joints are and poses no issues with stability. Optimus has no ankles, which is kind of a shame. His big, blocky feet are going to have no problem standing at any rate, but his feet have been angled for a dramatic, feet apart kind of stance that is exactly between two viable positions on the hip-ratchets. 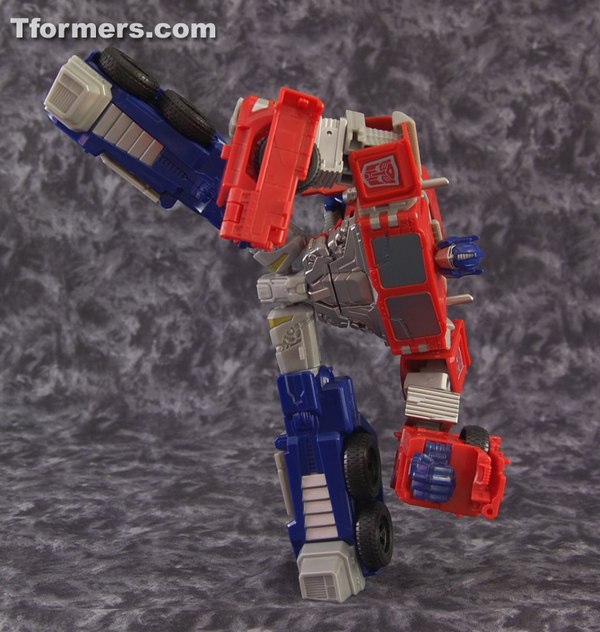 It's really, really simple, coming in between G1 and Classics. Optimus' arms fold forward this time (shocking twist!) and close over his windshield chest to become the real windshield. Which, combined with Ultra Prime's chest on the figure's back, makes for a grand total of three windshield chests, of which one is "real" in the sense of becoming the windshield of the truck. New record! Everything locks together very well, well enough that I didn't even notice the first time that there were a pair of tabs to lock the arms to the legs that I forgot to use. There's a joint in the middle of the torso so that the legs fold up properly to become the back of the cab, and the whole plate with the head flips over sideways to hide the head inside the chest, which is neat. 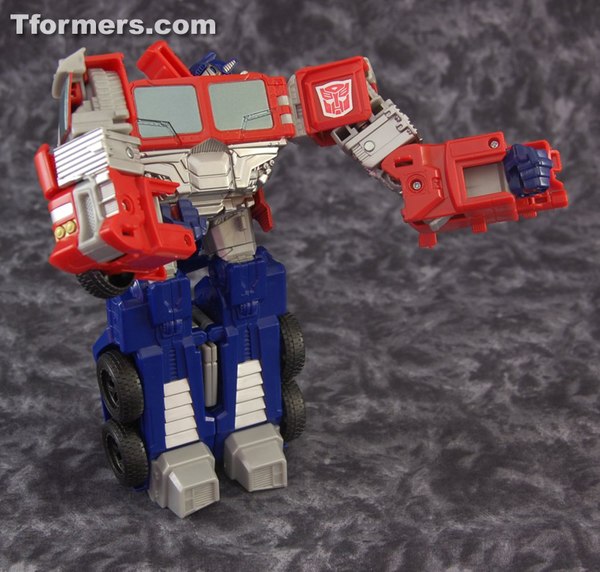 Optimus Prime is, to the shock of nobody since 1984, a red and blue cab-forward truck (with pretty obvious feet sticking out of the back - traditional!). But this time he's a really chunky truck, which I think I like the look of more than the chunky robot. I like that the smokestacks are recessed, only sticking about halfway out of the cab. They're also not just rigid plastic, but reinforced with pins- nice! The cab also has a kind of a "headache rack" - the barrier between cab and trailer designed to protect the driver in emergencies - that's formed out of the skirt armor for Ultra Prime. Real-world headache racks tend to be taller and provide more uniform coverage, but it doesn't look bad. In this mode the combination of the silver paint and silver-gray plastic isn't as attractive as it is on the robot, which is compounded by the wraparound corners of the windshield being unpainted. But it may be that the gray parts are unpaintable plastic since I don't see any parts of the toy where they're painted. (The gold details on the hips seem to be stickers.) And it does have rear-view mirrors, which many Primes skip! 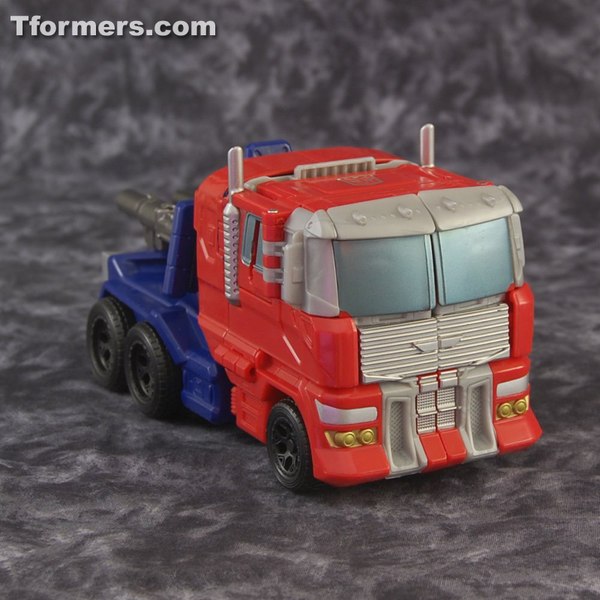 On the technical side, it rolls well and there's a pair of 5mm ports on the back of the truck for Optimus' weapons, as well as a 5mm trailer hitch. But all of those are designed for the ridged grips on Optimus' guns and won't accept just any 5mm peg. This also ensures that the guns stay straight when attached.

Two guns are included. One is pretty obviously Optimus' traditional Ion Blaster, though as with Prime himself the specifics are arranged in a way that makes it not my favorite rendition ever. The other gun is a new design. Both have very long, pin-reinforced 5mm pegs of a ridged design that locks them into a specific position on the truck mode. Prime's fists and any other 5mm fists you use them with shouldn't have any trouble holding them though. Both guns have some enginelike details, so when placed side-by-side on the truck they look like an exposed engine with dual exhausts for some kind of custom racing truck. At least I think that's the idea. It's a game attempt to try and integrate guns into the truck mode, and even if I don't know if I like the final effect I appreciate the effort. 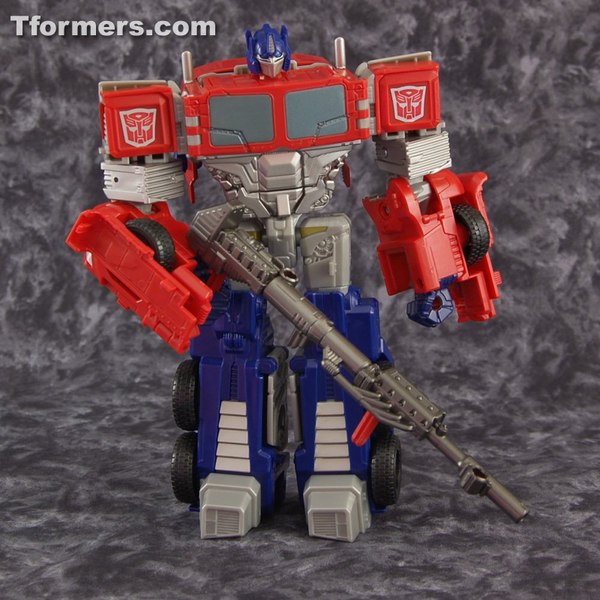 This being Combiner Wars, the guns also combine via another ridged peg into a longer weapon that looks like nothing so much as a sniper rifle. It's a nice touch, and the guns have a pair of straight-up 5mm sockets, presumably for attaching Legends-class figures like Powerglide or Bombshell. The ridged pegs lock the guns together in the proper alignment for the details on one to match up to the other- I like that. My only objection is that while the guns are painted a nice, deep gunmetal color, they're molded in red plastic, which makes the handles stand out a little unpleasantly. It also reinforces my belief that the silver plastic is unpaintable.

Just on its merits alone, Optimus Prime is Very Good on the Figurereviews.com Non-numeric Rating Scale. The fact that it's a combiner barely affects either mode, which I take as a positive. If you like the aesthetics of the toy, it's worth buying even if you never buy a single Combiner Wars limb.

Coming soon: we tackle Torso Mode and how Ultra Prime fares as a combiner overall! 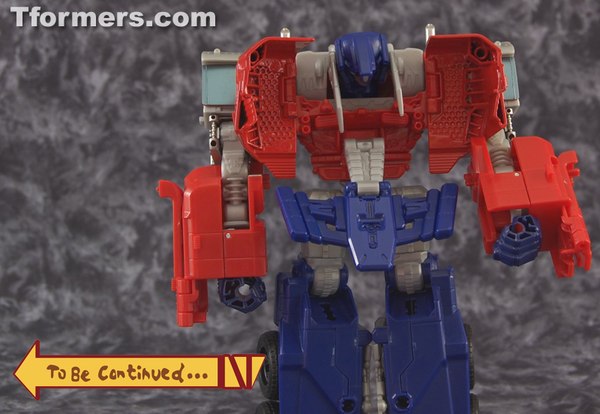