Release Data: Released December 2014 at a suggested retail price of US$14.99.

The leader of the Aerialbots forms the core of the team's combined form, Superion, a single-minded force bent only on Decepticon destruction.

I had G1 Silverbolt as a kid, but he didn't leave a huge impression on me as a toy or character. The toy is famously boring, and as a character he wasn't really used often enough to get the full comedy potential out of a jet that's afraid of heights. (I also haven't seen the episodes he is in for like 30 years...) But in terms of Combiners, Superion was the Autobots' very first one, so they tend to get a fair number of toy updates. That said, this is the first new mold since 1986 that was designed to both be Silverbolt and form the core of Superion. We've had non-combining Silverbolts (Universe), Superion cores not originally designed as Silverbolt(a reissue of Energon's Storm Jet), and a Silverbolt that combines, but not as Superion (Beast Wars). 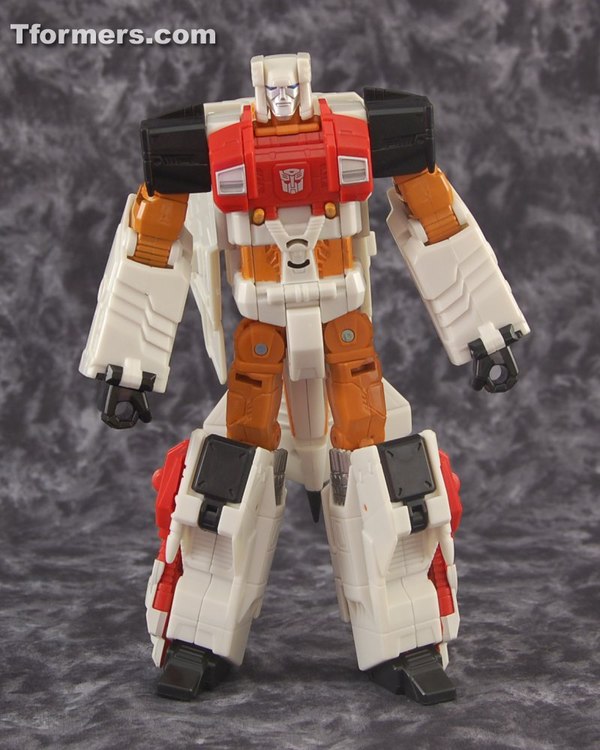 Silverbolt makes an interesting comparison to the 2008 Universe mold. While that was pretty faithful to the original toy (except with the usual addition of Superion's chestplate to diminish the inherent boredom of Silverbolt's default Robot Mode), this is much closer to the animation model in both coloring and shape. The best indicator of that is the gold paint on the limbs and his flanks. That color's represented here as a non-metallic bronzish color, and I think it works. The center of his chest is red instead of white, and thus has a silver Autobot symbol. The Gundam-like chest vents are a part of the original toy design, but they were just never painted in G1. The biggest deviation from the original design is in the legs, but that's unavoidable since that's the halves of Superion's chest on the outside. Speaking of which, those bronze pipes or gunbarrels in his chest are Superion's antennae - even if you're waiting on your limbs as I am, open that up and make sure the soft plastic antennae aren't warped. Other than that, I'd like to note is that he is a good representation of the classic Aerialbot aesthetic, as he is wearing 90% of a jet on his back.

The face sculpt plays down the lines from the facemask appearance of the original design and G1 toy, and the end effect combined with the long chin reminds me of Snow Miser. His eyes are painted, and while I do enjoy some good light-piping these will at least look blue in any decent light condition. The head has a good range on both axes, especially for being a cube on 4 out of 6 possible sides. The shoulders move very well on both axes too, but are very stiff ratchets. Which makes sense since his shoulders will become Superion's hips. In service of this, the elbows are also super-stiff, and have a very distinct "locking" position when the arm is straight. The upper arm swivels are the weak point here- they're fine for Silverbolt's purposes, but it remains to be seen if they will be for Superion's. 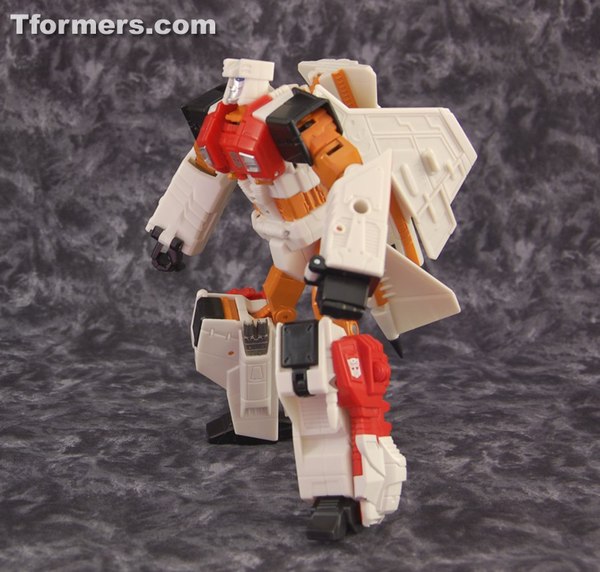 No waist, which is no surprise- there's a lot of stuff going on in the torso. The hips have no obstruction on either axis, but the ratchets are weaker and have more play than I find ideal. Luckily they're in no way load-bearing for Superion, but they don't always do what I want here. The thigh swivel is actually much stiffer than the upper-arm swivel, but at least the leg has some point of firmness to it. The knees have a double-joint for transformation but the shape of the legs locks one of the hinges down. It makes little difference, happily, as the leg comes close to doubling over on itself with just the one. But again, they're not as stiff as any of the arm joints. The transformation hinges for the feet do function as ankles, somewhat. But overall the legs are where it (sometimes literally) falls down. 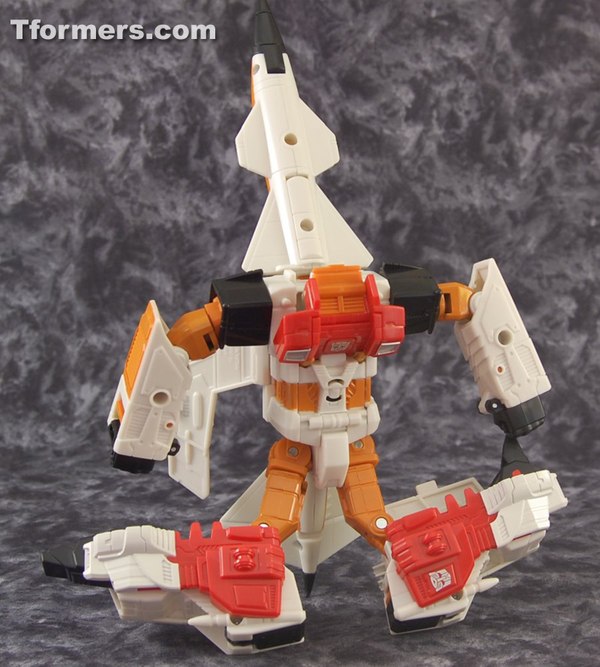 There's a couple of jet-panels you have to unfold on the back of the legs to fold up the feet, and then you just double the legs over, seat the arms into their sides, open the upper torso and tuck the head in, and unfold the jet around the body. Slightly more complex than the original but nothing that's going to really stump anybody. 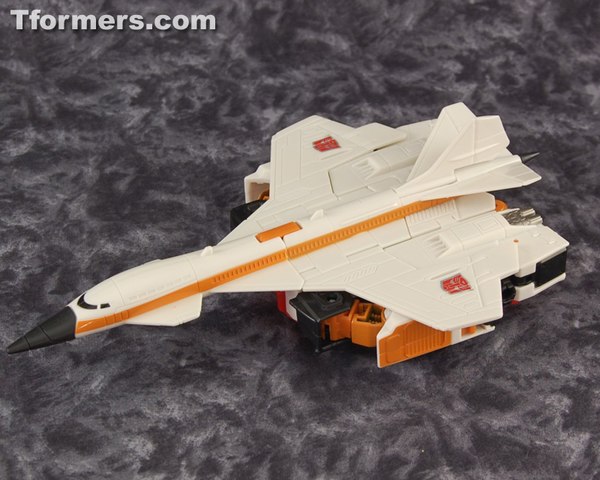 As with the original toy, Silverbolt is a jet based on the Concorde Supersonic Transport with a big robotic rectangle on the undercarriage. Not a surprise to anyone who's owned a jet Transformer for the past 30 years, but also not particularly impressive as a jet from any possible angle. It's a shame, because in absence of those robot parts it'd be a fairly attractive jet. The way the the arms plug into and align with the rest of the body parts is especially inelegant, but there's no place else for them to go. The nose and the spike on the tail are both very soft rubber, and it has a front landing gear, which is entirely a formality. It doesn't roll, and stability is not an issue when resting on that giant block. 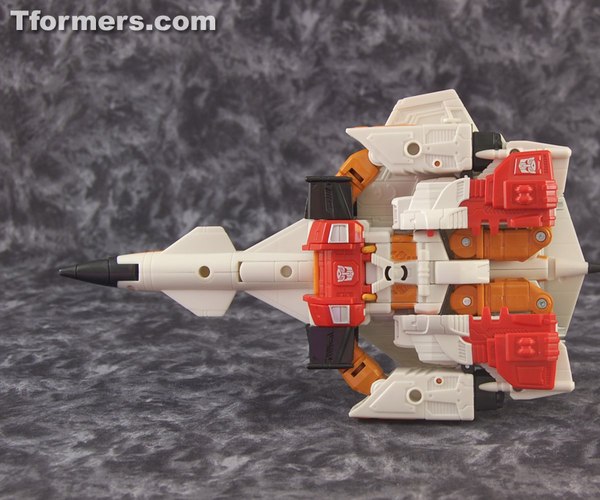 Silverbolt comes with his original gun writ large. Really large. Since part of the Combiner Wars setup is to give larger, combined weaponry to the larger, combined robots, Silverbolt has a hard time holding his gun straight in its original configuration. The solution to this is a great one: the flared, winglike part on the back splits off to become a shield. It doesn't fit the forearm quite as snugly as I might like, but it'll stay no problem. The ever-so-slightly smaller gun winds up looking reminiscent of the Joker's ludicrous revolver from Tim Burton's Batman. It fits in Silverbolt's hands just fine, and if you so desire it becomes an arm cannon very easily. 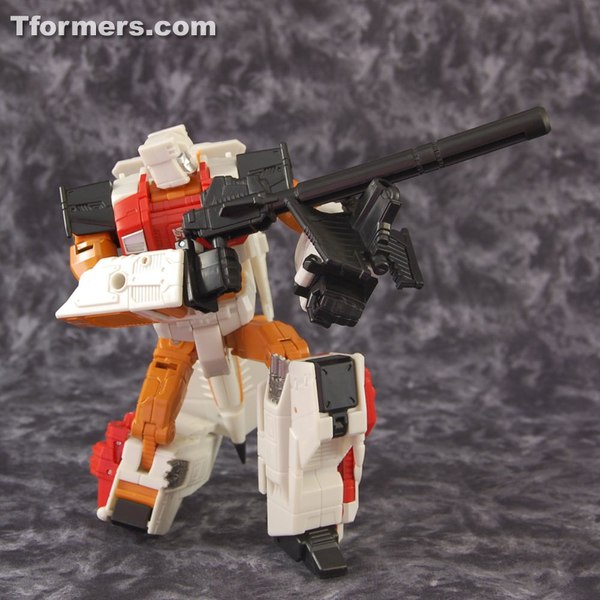 The combined gun will probably work just fine for Superion, and has a port on top for Powerglide of course. The thing I really like about it for Silverbolt, though, is that it plugs into the nose of the jet by both of the pegs -which are the ridged, pin-reinforced 5mm compatible Combiner Wars type, incidentally. This keeps the gun aligned with the nose. And it even has a replacement landing gear molded in the top! 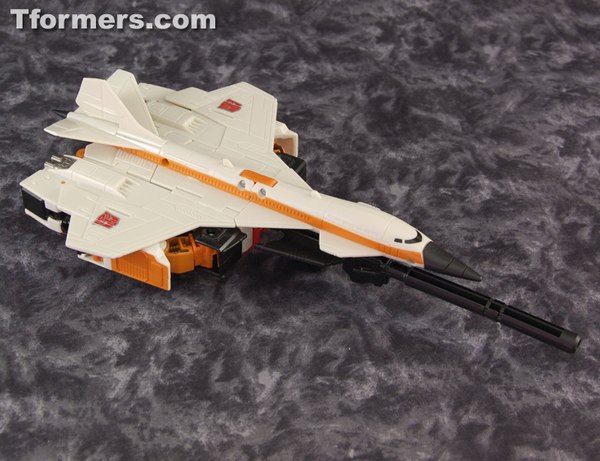 With Superion out of the picture, Silverbolt is a mixed bag. He's the least-boring take on Silverbolt yet done and I like his gun, but he suffers from weak legs and one of the more pronounced cases of G1 Jet Disease I've seen in a pretty long time. If you count that as some form of authenticity, you'll probably be okay with it. But either way, he's definitely a better toy on his own than the original was. That earns him a rating of Good on the Figurereviews.com Non-numeric Rating Scale. 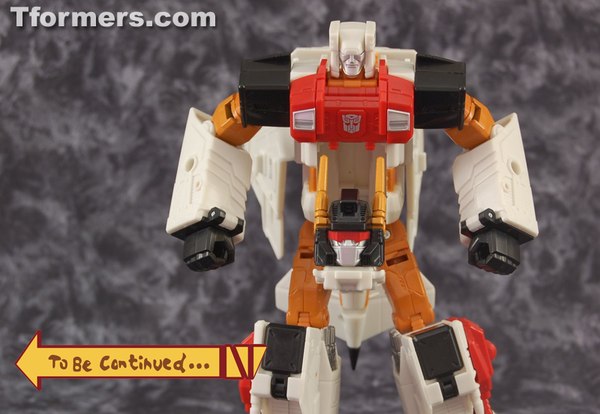