Yep, that's all you learn about Skydive on the back of his card. His G1 bio expands on that a good bit: he's a bookish master tactician with the ability to replicate any flying technique he sees, Taskmaster or Goku-style... but is prone to stalling.

And, of course, he's an Aerialbot. The much-anticipated Combiner Wars is pretty much Neo Scramble City in design, with a variety of interchangeable Deluxe limbs planned around Voyager core bodies, with the occasional Legends designed to combine with the larger figures in various ways. Skydive is going to serve as Patient Zero for the Deluxe reviews, and all of my Wave 1 Deluxe reviews will use him as point of reference for the shared aspects of their engineering. 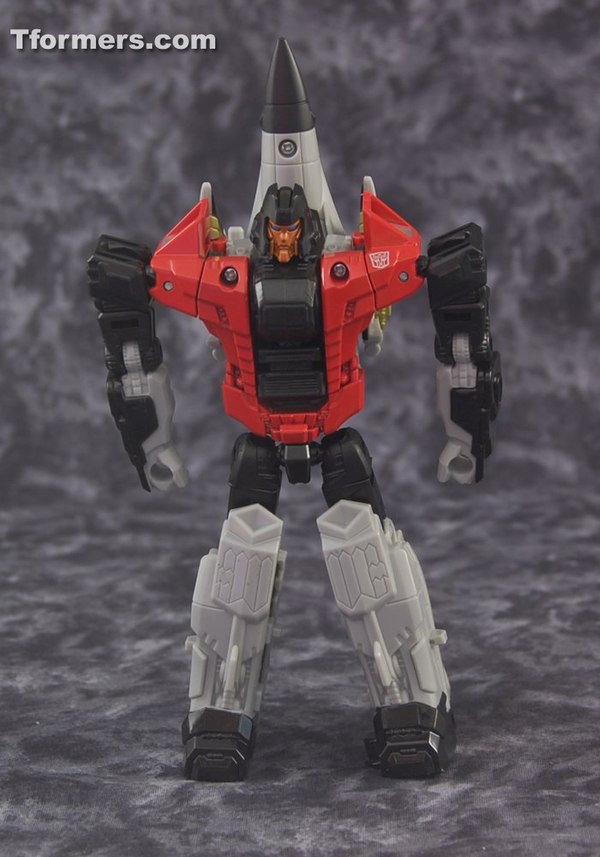 Skydive is pretty bulky for a bookish tactician! He's got very broad shoulders and the same waist width, more or less, as the rest of the Deluxes. In terms of matching his original G1 character design, he of course favors the animation as Silverbolt did. But he's maybe not so slavish a match. His design is an interesting amalgam of interpretations of his original model sheet, though: some depictions of Skydive show the sloped parts of his shoulders as being red and a part of his torso, and some show them as black and being part of his head. This design does both, while also adding detail to Skydive's face and rounding off his original square combiner-peg head. The shoulders and an exaggerated taper to his animation head design, when taken together, give the design that bulky bruiser feel. Also it's worth noting that optics on all the Combiner Wars figures are painted rather than light-piped, and they've found a really good, glossy light blue for the Autobots.

Otherwise, in terms of body design, he's an Aerialbot. By which I mean that he's got most of a jet wadded up on his back. At least it's most of a jet now and not the whole jet, as Firefly and Skydive both incorporate the tail of their respective jet modes into their lower legs. The new peg design is not quite identical to the original, in that Skydive's head is not going to spend a lot of time in Superion's armpit. Instead there's a tumbler in the chest that ratchets the peg into the positions needed for limbhood. While Combiner Wars is not giving off the air of being underpainted that has plagued Generations the past few years, some other details on the red torso would've been nice. The silver Autobot emblem outline is a great touch though. Be warned: most of the paints being used this year are very thick and glossy, and in Skydive's case the red has been identified as very prone to scratching. I've lucked out so far, but be careful! 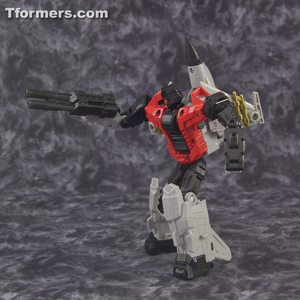 All the Combiner Wars Deluxes use the same set of jointing: ball-joint head, swivel waist, and limbs with uniform points of articulation: ball-joints at the shoulder/hip, swivels at the upper arm/thigh, and single hinges at the elbow and knee. And all have closed blocky fists with 5mm-compatible sockets. It's not groundbreaking, but that's kind of good; since these toys have four times as many modes as the average Deluxe Transformer, the less that can go wrong the better.

Skydive has good range at all his points of articulation, with the shoulders being particularly unrestricted set out from the body as they are. His head's got okay tilt and unrestricted swivel. I'm not a fan of how Combiner Wars Deluxe waists tend to look, as they fall really low on the torso, and they're kind of narrow besides. But they work just fine. Skydive's hip joints in particular feel a bit on the loose side- his legs do sometimes come out from under him. Otherwise, posing is generally pretty stable thanks to the blocky feet and the tailfins, which drag the ground sometimes. The proportion and hips together preclude kneeling, but otherwise Skydive does pretty well with most basic poses. 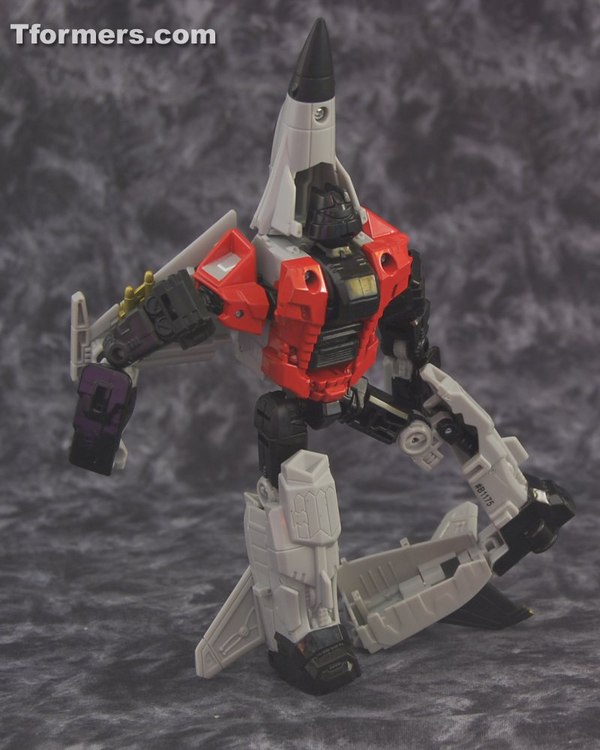 Skydive's probably the most complex to transform of all the Wave I Deluxes. His big shoulders have to swing back and down to get his arms out of the way for his jet mode. The first time you do it, it'll be kind of scary - especially since paint is touching paint and it can be a little sticky. Once you figure out what direction to push, it works pretty well, and when you transform him back they'll still tab firmly in place. Other than that it's a matter of opening up the lower legs to collapse them and then re-closing them onto the torso. That and getting the tailfins aligned properly. Everything locks down as it should and works fine. 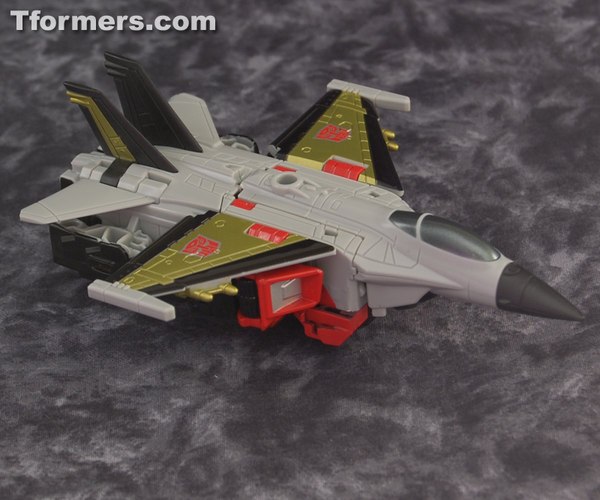 Where Skydive was originally an F-16, the desire to not just straight-up copy unlicensed real-world vehicles and the need to share parts with Air Raid have made Skydive into more of a hybrid model. Like the original, he has a gold body with black (rubber) nose, plus black and gold wings and tailfins. It looks pretty nice overall, though the Autobot symbols on the wings being intersected by panel lines look a bit funky. Especially when they could've moved them inwards slightly to avoid that. That said, the Autobot symbols complement the red hinges and pegs that show through on the body in this mode and make them look like an intentional deco choice. Nice! There's some gold missiles on the wings that stand out nicely, and 5mm ports on the undersides for accessories as well as one on the top. The jet doesn't have the most pronounced case of robot-body-on-the-undercarriage - that'd be Silverbolt - but the fists in particular are kind of noticeable. No landing gear, but none is needed for any toy purposes since it sits level on the robot body block. Like the robot, it's all pretty basic but functions well. 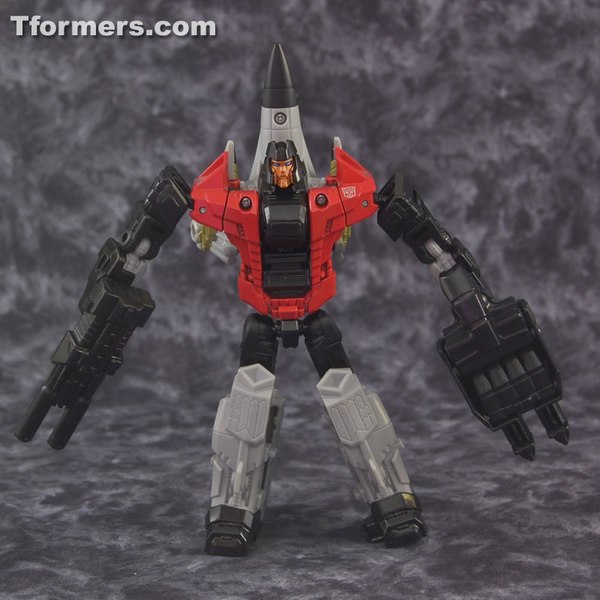 Skydive's main gun is described on his G1 Tech Spec as a "nega-gun," a double-barreled gun that crumbles objects by destroying their molecular bonds. So, death by Gold Plastic Syndrome essentially. (...so that's what happened to Slingshot: G2-era Fratricide.) It's a rectangular thing, very G1 in general appearance even though it's not just a scaled-up version of Skydive's original gun. (And I consider that a good thing.) In a perfect world, the various notches and ridges would correspond to some of the other Aerialbots' weapons to turn into something larger and more impressive, but sadly that doesn't seem to be the case. That's the one thing from Fall of Cybertron Bruticus that was very right, so it's kind of sad to see it gone here. Another minor thing I'd have liked was symmetrical storage for all the accessories, but it's not quite here, sadly. 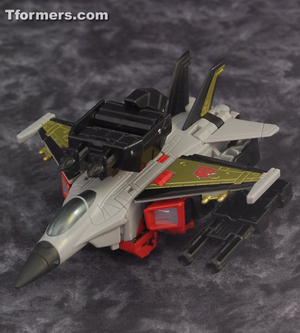 The other weapon is what I've taken to calling a HandFootGun. Every Combiner Wars Deluxe has one, and the designs vary slightly from figure to figure. Skydive's is tipped by two pointed protrusions that may or may not be missiles or missile pods. They make cool spiked knuckles or toes for Superion either way! But the engineering on each of these accessories is identical. The thumb/heel spur is on a pair of hinges that allow the thumb to fold over and switch sides to make this a left or right fist. It also folds up on the top of the gun, which manages to look minimally like a big thumb on top of a folded-up hand... but still kinda does.

To be a foot, you unfold just the thumb and plug the weapon into the bottom of Skydive's leg mode. To turn it into a hand, you unfold the fingers, arrange the thumb for whichever side you please, and fold the pegged part down until it's all fist-shaped. Doing so will reveal a 5mm port for whichever weapons you want your combiner to use. Overall Skydive's has the worst tolerances of any of the pieces I've gotten so far, but not in any way that will affect its usability or stability. It's just that the hand mode joints are stiffer on the other three figures' HFGs. 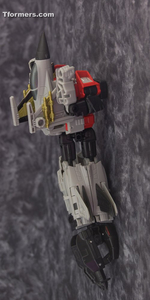 It's relatively easy to do: first, you pinch his legs together, attach the HandFootGun, and turn the backs toward whichever side you want to be the front of the forearm. Then you push his head back towards the nose of the jet to expose the connector, and contort his arms until they peg into the wings. Thing is, they do this on the outside of the forearm, which is painted. Not my first choice. But that aside, Skydive makes one of the better arms, with the kibble well out of the way and arranged in a rather decorative way.

Turning Skydive into a leg is as simple as rotating his shoulders down and closing up his legs as for jet mode, and then rotating the tumbler his head is on until the peg points straight up. It's simple, it's solid, and it's a classic Superion leg with a jet nose knee. What else do you need to know?

When Combiner Wars was announced, we were both excited and concerned with Fall of Cybertron Bruticus fresh in our memories. But the biggest issue with the Bruticus limbs were the overly ambitious, highly varied designs that had to do four separate things. Combiner Wars, happily, reins in the confusion that such complexity engendered. Taken on their own these would be extremely basic-feeling Deluxes, solid if not particularly exciting. But the fact that Skydive accomplishes all four of his modes equally well merits a rating of Very Good on the Figurereviews.com Non-numeric Rating Scale. With more versatile and storable weapons and connections that didn't tab into painted parts, he would be close to perfect. 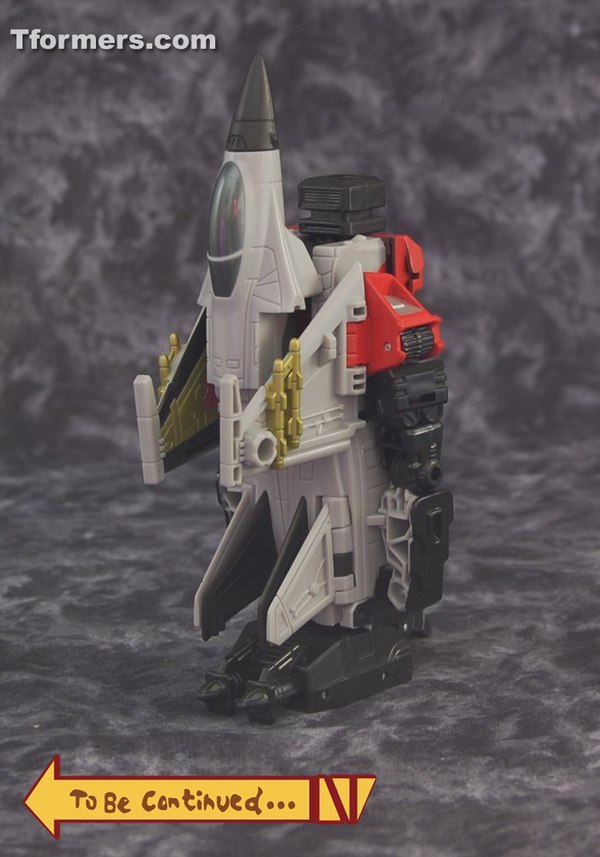