Here's where super-brief bios really hurt: who is Alpha Bravo? Real-world answer: he's the guy subbing for Slingshot because the name's not available and the toy is boring. In-universe? Well, he's the guy who loves Cybertron so much he's willing to appear in one panel of one issue to consent to Wheeljack splicing him into Superion. At least that's all he's had a chance to do so far, but it was a Sarah Stone issue so at least he looked cool doing it. So there we go!

As I mentioned in the previous reviews, Skydive is going to serve as the reference point for the things that all the Combiner Wars figures have in common, so click here to see that review! 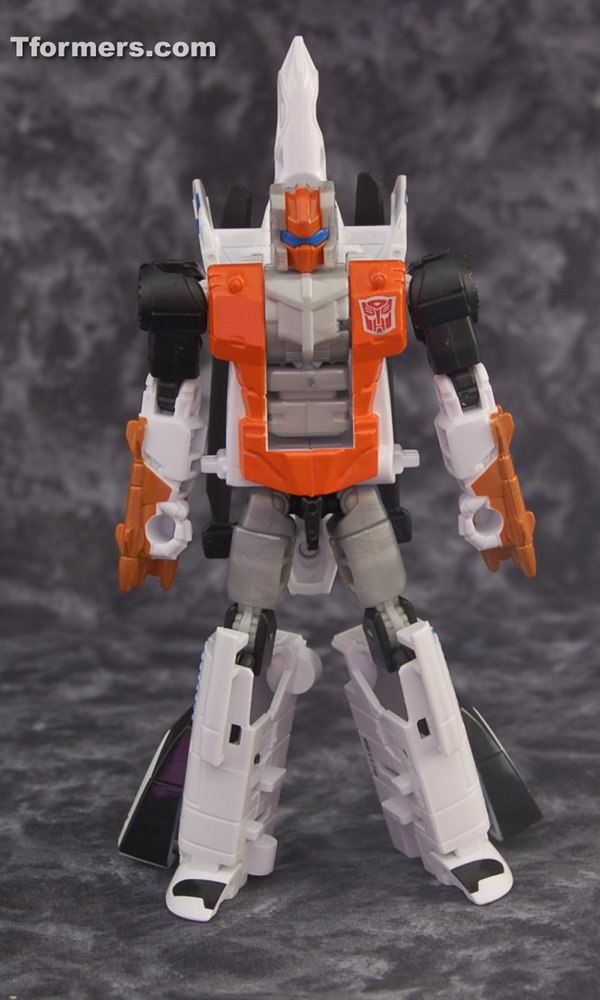 Alpha Bravo is... okay, he's Shattered Glass Vortex. He's got the standard Combiner Wars/Scramble City body type with a U-shaped orange patch on his torso and a gray center/tumbler, also a visored and facemasked head. It's a really nice sculpt, and the light blue used on all the Aerialbots' optics looks especially good here. And the orange face stripe apes the Slingshot head deco of an orange head sandwiched by a couple of flat armor plates. He's got a nice broad set of feet due to the helicopter nose being divided between being toes and bell-bottoms, which was necessary to keep all the leg modes the same length. He's got a set of missiles around each forearm- yay for more built-in weapons!

Of course, Alpha Bravo doesn't have a jet attached to his back. He's got the back end of a helicopter. Sadly this also means he has the most inelegant backpack of any of the Wave 1 Deluxes, but rotors have to go somewhere. In this case they just hang out near his knees, folding up between the tailfins of the helicopter. The instructions make it seem like the rotors were once designed to swivel, which would allow you to raise the arm they sit on for a more compact backpack, but then the final robot mode illustrations, package art, and toy all contradict that. Pity. So, it's a little clunky. The rear rotor/stabilizer rotates, but the official robot mode has it pointing straight back, so I'm assuming that joint is entirely for getting the toy on the card.

All the Combiner Wars Deluxes use the same set of jointing(and so all four reviews share this paragraph): ball-joint head, swivel waist, and limbs with uniform points of articulation: ball-joints at the shoulder/hip, swivels at the upper arm/thigh, and single hinges at the elbow and knee. And all have closed blocky fists with 5mm-compatible sockets. It's not groundbreaking, but that's kind of good; since these toys have twice as many modes as the average Deluxe Transformer, the less that can go wrong the better.

Just as Firefly did, Alpha Bravo has good head tilt, and the waist has a nice, clicking "stop" for centering itself. Unlike the others his elbows bend backwards a lot more freely, and he has the tightest hips of the lot, allowing him to kneel successfully when combined with the reduced leg kibble compared to the others. They'll also be very useful in Arm Mode, which makes one tic of that mode kind of unfortunate. But ultimately he has the same straightforward but very well-executed articulation as the other Aerialbots. 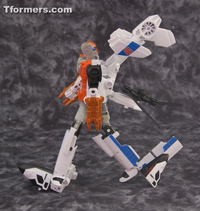 It's actually pretty similar to the other two Aerialbots despite the different alt mode. The arms tab down to the sides, and the backpack unfolds into the back of the helicopter. There's a twist, though, and it's literal: you turn the waist 180 degrees before you crack the shins open to rearrange the armature that the knee joint is attached to. That's about the closest to an unusual step you'll take on any of the Aerialbots.

It's a pretty nice looking helicopter- still in the basic Slingshot color scheme of black and white with some blue, but it's not a third or fourth jet, which doesn't hurt anything. Alpha Bravo becomes a Eurocopter Dauphin (II), or something very much like it. From the less-pronounced motor hump, you could make an argument that it's the Aerospatiale AS-360 Dauphin I, the original model of the popular helicopter. But overall most of the differences fall into the standard "similar to but legally distinct from" category of Transformers styling. Most variations of the Dauphin don't have the flattened underbelly, notched tailfin, side-mounted clusters of missiles, or robot torsos on their undersides. So let's not get too specific here. 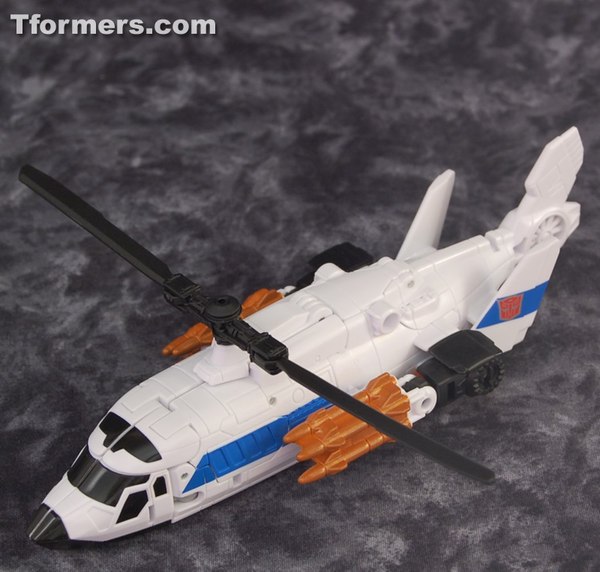 The blades turn, but the hinges for transformation tend to knock them out of alignment as you go. There are 5mm ports for weapons but again, nothing symmetrical; there's one centered port on the bottom, but of course two weapons to contend with. Luckily there are other ports on the sides of the chopper near the top so you can at least store everything when not in use. Naturally the HandFootGun is a pretty good choice for the underside, since Alpha Bravo can sit on a table when it's attached. 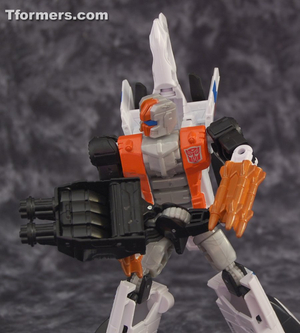 Alpha Bravo gets an interesting weapon design, at least: it's a belt-fed gun with a neat open frame around the barrel. Sadly, it looks like it just fires boring old bullets. All the other Aerialbots have wacky G1 weaponry- Electrostatic Discharger Rifle, Torque Gun, Nega-Gun, and Photon Displacer Gun. Alpha Bravo doesn't seem to inherit Slingshot's Neutron Rifle. Maybe it'll get some kind of cool function in the Combiner Wars comic, but in the meantime at least it looks good.

The joints on the HandFootGun aren't terribly stiff, but they do the job. Alpha Bravo gets a double gatling gun for his big gun, which works pretty well all in all, especially mounted to the underside of Helicopter mode. Since it's a big, heavy-looking weapon, sometimes I like to stick the thumb out to act as a brace. 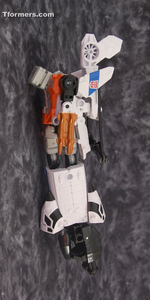 Pretty much you just tab his arms to his sides, pull out the tab, and pinch his legs together. Sadly, he's by a small margin the worst arm as his robot arms hang down in a way that can obstruct the elbow somewhat. But only a bit, and it's by no means unusable. And he's got good, strong hip joints that make for a firm elbow too.

On the other hand, he makes an excellent leg. Basically leg mode is a natural halfway point between vehicle and robot modes. The robot feet, composing the top of the helicopter cockpit, make the foot as a whole look more natural and less flat. They're all better than the old G1 slippers, but Alpha Bravo is a touch better than the rest.

Alpha Bravo is pretty good! In fact, he's Very Good on the Figurereviews.com Non-numeric Rating Scale. He's solid in all modes, even as a slightly obstructed arm, but I'm not super-thrilled with the state of his back kibble. The rotors never really want to rest in a place that feels comfortable for me. It's not that bad, but I feel like it could be just a touch better. But also: it's a new guy! How often do we get that now, especially in Generations?

(It's looking like it'll be once per Combiner, and also a whole lump of them in the form of the Fan-Built Combiner. But Alpha Bravo was first!) 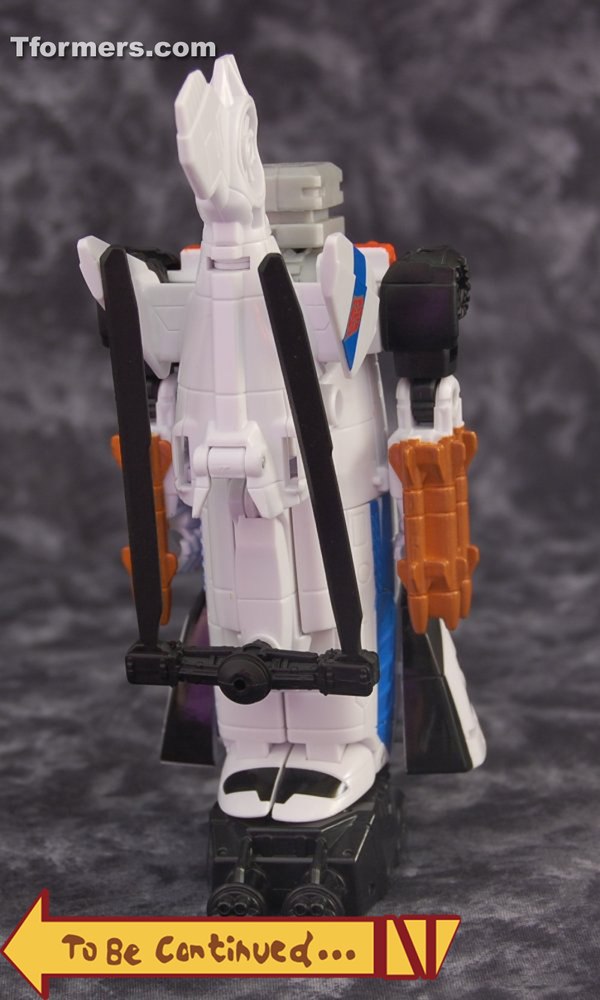