And here we are! We've reviewed the individual Combiner Wars components, and now it's time to move on to Superion himself. But first, take a moment and reintroduce yourself to your old friends from G1, the Aerialbots: 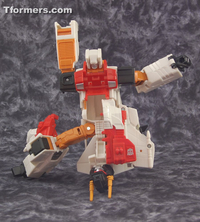 Silverbolt turns upside-down for the transformation, which actually works incredibly well. The legs fold up to become Superion's torso, and it all tabs together pretty securely and looks amazing. It's really striking how good this looks. A piece of Silverbolt's own torso flips out to seal a gap between the upper and lower bodies, and this serves the double purpose of ensuring Superion doesn't have an upside-down silver Autobot symbol on his crotch. Hopefully you checked your Superion's antennae when you got Silverbolt, but if they don't want to stand up entirely straight, there's a fix for that. Some people haven't had luck with that fix though, so don't be surprised if there's a Third Party solution before long.

Once you've got Silverbolt torsoed, configure your Deluxes into arms and legs -ideally two of each - and slide them into the ports at the shoulders and knees. They slide out just as easily when you're ready, but generally you won't have any problems with them popping off. 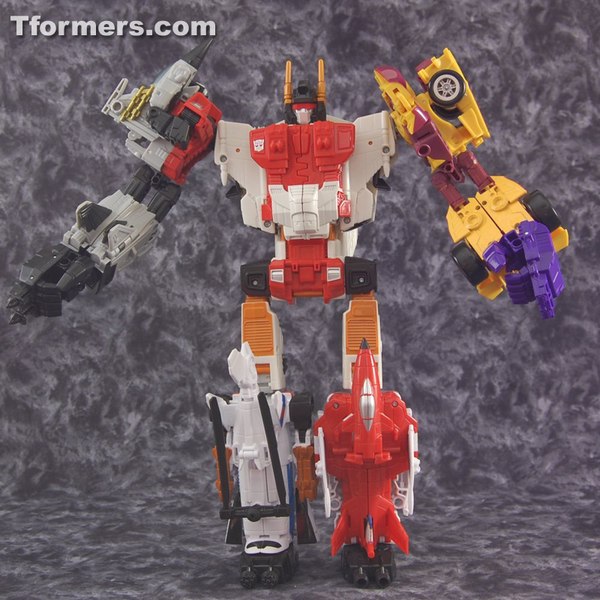 And then you'll generally just take a minute and gawk at the thing. Superion is massive. Doubtless not the tallest toy you've ever handled, especially if you're into third party stuff, but in terms of being comprised of slightly less than $100 worth of retail toys? Man. The only other Hasbro point of comparison we really have is Fall of Cybertron Bruticus, and this is better than that in every conceivable way. (Slightly taller, too!) Looking solid and well-proportioned, Superion is something that I don't think any of us expected Hasbro to be able to do, especially in the last few lean years of reduced size, complexity and paint.

Proportionally, Superion is a massive improvement over the G1 version- I know you're shocked, there. But he's also an improvement over every other combiner Hasbro has done to date, in my opinion. The shortened upper legs - formed from Silverbolt's arms - especially help the proportions a good deal. The arms also give a greater sense of bulk and power without dwarfing the torso they way they did on Bruticus. In terms of design, Superion more favors the G1 toy in his shapes and color layouts. The exception being the face, which has the cartoon faceplate in favor of a mouth. His face is also silver, which neither version had (except possibly in animation errors). But I'm okay with it, as if they left it in black it might look a little unpainted here, rather than good. 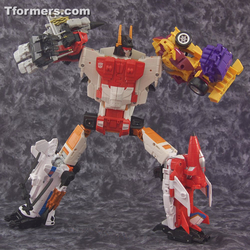 Because the Deluxes are largely uniform in how they operate as limbs but there are small variances in how the articulation plays out based on which Voyager core you're using, it seemed right to save the articulation breakdown for the combined forms. In terms of articulation, it may be a subtle improvement over the rather basic Deluxe figures, but Superion is more than the sum of his parts.

Well, except at the neck, which merely swivels, and the waist, which doesn't. And given the amount of stability the non-swiveling waist lends, I won't miss that. But from there, it's all better. The arms, powered by the Combiner Wars pegs, both swivel and swing outwards on strong ratchets that have no trouble holding poses whatsoever. They're so strong, in fact, that sometimes they want to pull Superion's chest open. Most arms can swing straight out but some, like Dragstrip for one, may need their kibble rearranged to make that viable. The Deluxe waists function as upper-arm swivels, which turn a full circle. The combined hip and knee joints of the limb-bots function as a double-jointed elbow. This can be a bit weak, depending on the arm, since the hips are all ball-joints, but the weapons (sans hangers-on like Powerglide, anyway) are mercifully light. And of course the pegged-in nature of the hands means that they swivel freely. In practice, the fingers tend to want to retract, especially on those hands with looser joints like Skydive's.

And now we see why Silverbolt's arms are so strong! Silverbolt's shoulders become Superion's hips, so those strong ratchets become super-useful. The hips have an excellent range along both axes. The only thing I would classify as a real weak point is Silverbolt's upper-arm swivels, which are now thigh swivels. I was worried they'd be a bit loose, and they are. Enough to interfere with a few poses here and there at least. His elbows lock very firmly, so they won't bend unless you want them to. It can be useful in a few poses for an extra knee joint. The ratcheting knee joint proper, formed by the tumblers in the Deluxes' chests, is strong enough for posing, but I feel like it could ideally be a bit tighter. The feet rotate too, but that's of limited use. But Superion can pose, and kneel, and his balance is quite good. 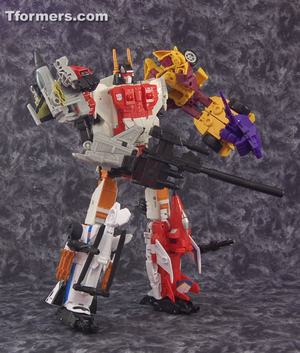 Superion, unlike Silverbolt, can hold Silverbolt's whole gun, since his hands are large enough that the sloped wings on the back don't interfere. Perhaps it's unique to my copy, but his grip could be better; the peg on the shield piece is a bit slim on the sides due to a textured design to make it look a little less peggy.

Superion also has to figure out what to do with the other four weapons left over from the limb-bots. There's room for one on top of his gun, and one in his other hand even though most of them will look like a derringer to him. The other two will have to go on the body somewhere if you don't want them just set aside. Luckily there's plenty of 5mm points to pick from, but I still wish there was a way to combine these weapons with the main gun or the body more effectively.

Superion is great. It's something nobody thought would happen, and those who did never expected it to happen this well. Silverbolt is integrated into the torso design seamlessly, and there's little to nothing on there that looks like a leftover part from a smaller robot. For this figure I'm breaking out the long-disused highest rating on the Figurereviews.com Non-numeric Rating Scale: State of the Art. The Combiner Wars concept works, and works well. It's going to be a great year. 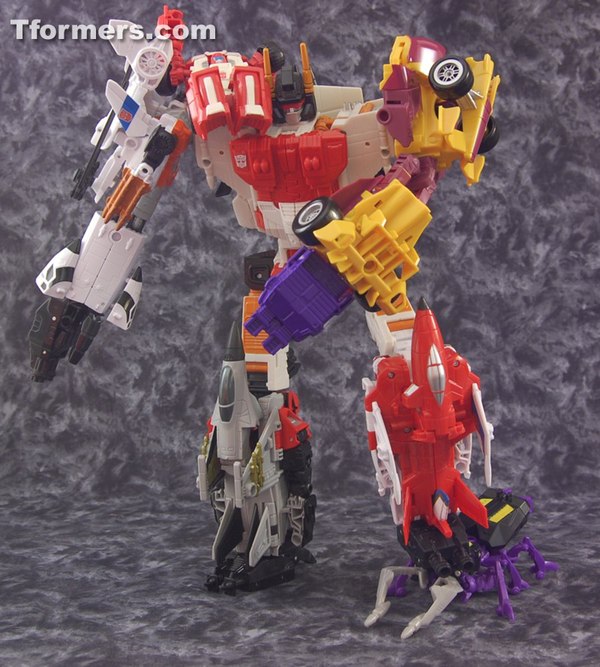