Optimus Prime's Cybertronian vacation is interrupted before it begins as a string of violent murders strikes the ghettos outside Metroplex, and only he cares enough to see justice served for the dead Decepticons. Transformers: Punishment, written by John Barber, illustrated by Livio Ramondelli.

As Optimus Prime is returning home to carry out a personal errand, a group of Decepticons are killed while planning to carry out the theft of some tech from Starscream's residence. While Decepticon law officer Barricade is interested in seeking out the guilty party, Starscream and the Dinobots are far more dismissive over the deaths of Decepticon criminals. Starscream has no intention of informing Optimus of the deaths, but Sludge and Windblade fill in the gaps. The murders are revealed, as is the reality that the Decepticons are largely segregated outside the city. Optimus tours the outer "settlement", and quickly becomes the focus of a mob eager to take apart the Autobot commander. Optimus is saved by Starscream - which give Optimus the chance to notice another Decepticon trying to remain unseen. Prime breaks away from Starscream and gives chase, but the Decepticon discovers his accomplices killed shortly before being shot dead himself. Optimus takes it on himself to discover who's carrying out vigilante "justice" against the Decepticons, and is joined by Windblade in his investigation. 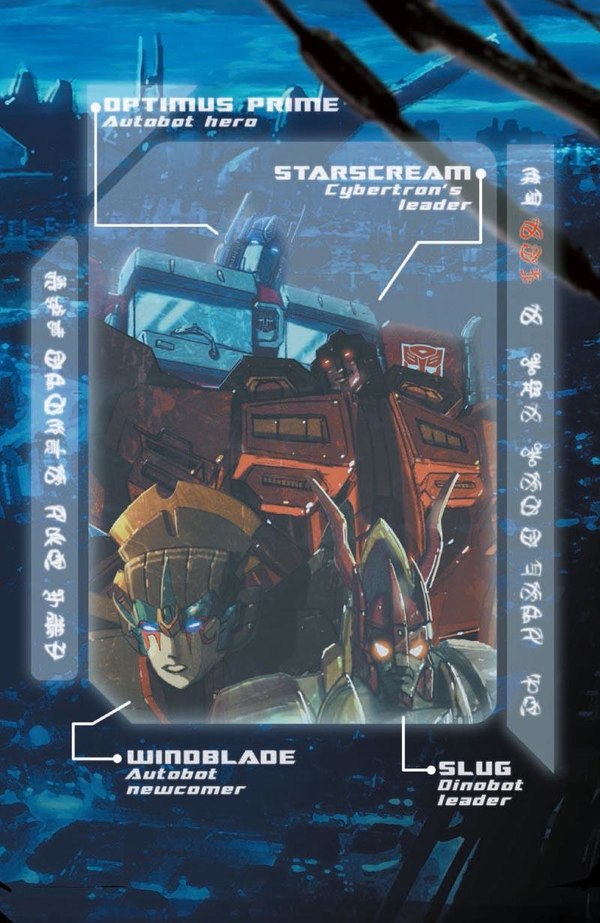 It took me literal minutes to figure out where in this page Starscream was. MINUTES.

Perhaps the best thing this can offer is a sparse few instances of a present-day Orion Pax, Supercop, though decidedly less super. Everybody slows down a bit as they get older, though. What story is Punishment trying to tell? It follows the pattern of a fairly standard murder-mystery, including acquainting you with the guilty party before you get to the end, so there's not much special or creative with that. It's giving us a status report of life on Cybertron, but unlike the one-shot Robots in Disguise issue with Wheeljack getting to know the new world, this shows us the other side of the society: Decepticons are second class citizens being denied a fair chance to reintegrate with the population and carry out normal lives because of the reputations of their past. But we also get to see that not everyone who gets to live inside Metroplex has it great either. Metroplex acting as the new foundation of Iacon might have given a bright and shiny image to uphold, making things look good superficially, but the state of life hasn't really changed in general since the resettlement of the planet began three years ago. And Starscream is in no evident hurry to try to better any of it.

He disregards the outcast Decepticon population and acts as if they're trying to redevelop more of the planet outside the confines of Metroplex to justify leaving them out there to their own devices. He's resigned to the idea that nobody likes him, and that seems to give him leave to not even try to make things better. It reads very much as a "you won't appreciate it anyway, so why should I do anything for you" attitude. It is all at once the outcome you would expect of Starscream as a world leader, and also a thing I feared when Starscream actually took control: this is not being used to truly develop the character. He's not being seen to grow or expand in his new role, he is simply Starscream doing this job. Contrasted with Autobot Megatron who is in most every issue showing some little growth or change because of the choice he made and the position it placed him in, and Starscream appears to be stagnant at best, and mishandled at worst.

The issue is largely dominated by Optimus monologues, which rarely offer anything that feels like a real insight. For the role they fill, a narration box not attributed to any character would have fulfilled the exact same purpose. We spend the time reading his thoughts, but it's no new ground. Optimus quickly settles in to a path of depression about being the military commander of the Autobots and having contributed to making their civilization a trainwreck that will probably never be salvaged, and carries on that beat the entire time. It's no fun to read, and it's all things that we've had thrown at us already so it's not even giving interesting development while it's being a bummer. That's what feels like the real crime in the writing. This isn't fun, this isn't new, this isn't really informative. Optimus has a lot of self-hatred. Dark Cybertron made it out like he might have worked through some of that. But no, apart from retaking the Optimus Prime name, nothing has changed. You might be able to charitably look on it like whatever progress he made got sabotaged by first Prowl over the last several months, and then Alpha Trion unloading on him. But whether you want to take it in that way or not, the character is being kept in a rut. Be it out of comfort writing the character in this way, or for lack of a direction to move him, it's still a rut and it needs to be dug out so we can move forward.

This is also heavy with filler character appearances, mostly in the Decepticon casualties. Using foreign character names to create "distinct" individuals who conveniently look like other dudes, or the odd addition of characters from other continuities ...just to die right away. The one that manages to shake loose from that is Barricade. Within the story he still identifies as a Decepticon but doesn't care about the faction split. He's a played-straight Decepticon lawman, and even Optimus Prime acknowledges and praises him for his dedication to his cause. Barricade survives the story, and is someone I'd like to see have more appearances in future Cybertron-based stories. As written here, he's got potential as a good addition to this continuity. But that's the only praise I can give for character inclusion because everybody else introduced here managed to be designated victims. I'd really sooner see generics made up to fill the body count than taking foreign character names or borrowing from other series just to have "named" individuals. Killing "Wilder" is going to have no greater impact on most of the readers than killing someone you just made up, and getting a namedrop right before being murdered isn't going to endear anyone otherwise.

I have to concede, for the type of story and the setting, Ramondelli's style kind of works. The dark grunge fits locations the story describes as ghettos, and the visual impenetrability makes sense when everything is happening at night. I mean, why would you expect to be able to see and tell what's going on in the middle of the night, right? But there's your crossover point between thematic fit and bad choice for telling a story. The only saving grace might be that there are a number of big images so there's a good bit of room and it's easier to read what's happening than if it were crammed in a smaller panel. But wow, the fight scenes can at places be next to impossible to crack. If there's not some dialogue somewhere near by to summarize what happened you might never figure out exactly what was supposed to have taken place. There's a few panels of Starscream flying in robot mode by virtue of a column of flame erupting from roughly the mid-shin and expanding out wider than his body. Nowhere does this seem as problematic as when Starscream is carrying Optimus by the arm, leaving his body to half fall in to the towering pyre and giving no small wonder to Optimus Prime not being incinerated in the process. It is a trait of Ramondelli for effects to be overdone, and that's a great example. I have to be fair and give credit to some instances of lighting that seem reasonably nice, but then there are other places where this attention to lighting manages to highlight structural issues with the underlying lines typical of Ramondelli's drawing style. It's a wish I express every so often when talking about books illustrated by him, but I really think Livio Ramondelli could be very interesting coloring someone else's art, and it's an experiment I'd like to see carried out some day.

Now, this is not the first release of this story. Punishment was made available in mid-2014 through Madefire, for free. But only to Windows 8 users with the Madefire app. Though we don't have any hard numbers on the demographics, we're going to assume the portion of interested readership that also has a Windows 8 device is not a very large overlap. This leaves a large portion of the audience excluded for months until a standard publication happened. I think this is a really fantastic way to alienate readers, and happened exactly backward of how it should have. This story is designed to fall right about now in terms of the publication of the surrounding Transformers titles, which means that it was released way early and out of sequence. The story itself does nothing to actually spoil any of the current ongoing stories, but it's a small victory. Punishment should have been published on its own in print and normal digital distribution first, now. Then a little later on a motion comic adaptation could have been released as a platform exclusive if Madefire wanted to. I read plot summaries of this story months ago, as I'm sure did many other people who had no means to access the story at first publication. Maybe some of the buying audience have kept unspoiled on it, but I'm betting for the most part whoever is getting this is going in to it with full knowledge of the ending, and there will probably be some that will choose not to even buy it based on the knowledge they already have. I wouldn't blame them for that choice. Just based on the exclusionary state this existed in for so long I would myself have seriously considered passing on it. I hope that there was enough negative reaction to Punishment's delivery that they never make an agreement that excludes so many readers from the first publication of a story again.

I didn't give this a negative review because of having to wait months to have access to the story. That may be a temptation, but it didn't need the help. The writing gave a taste of some worldbuilding elements we haven't exactly had in the "second season" of Robots in Disguise/The Transformers, but was mostly uninventive and felt like it was showing reruns of characterization concepts without doing anything to build them. And if you're not a fan of Livio Ramondelli's style, there's little to make this title a draw. In the end, Transformers: Punishment lives up to its name.