Blackrock explains the unknown origin of civilization, while Prowl tries to put the past aside and work with Spike to achieve the goal they vaguely share. Meanwhile, Galvatron tries to convince Arcee that Prowl may not have anyone's best interests at heart other than his own. "The Onyx Interface Part Two: ONOFFON" written by John Barber, with art by Andrew Griffith, and colors by Josh Perez and Thomas Deer.

Caught between Galvatron's Decepticons and Prowl's Constructicons, Arcee sidesteps the issue by blasting off with Jimmy Pink, but Galvatron gives chase, attempting to subdue Arcee and resulting in Jimmy landing in Buzzsaw's care. Prowl talks with Spike about the past, and why the animosity needs to end. Bigger things are at stake than upholding this grudge, and it might be worthwhile to Spike to help keep the Enigma out of the hands of his father's killer: Galvatron. Meanwhile, Blackrock gives a lesson in the secret history of the human race, and why the origin of all human society is owed to a single piece of Cybertronian technology. 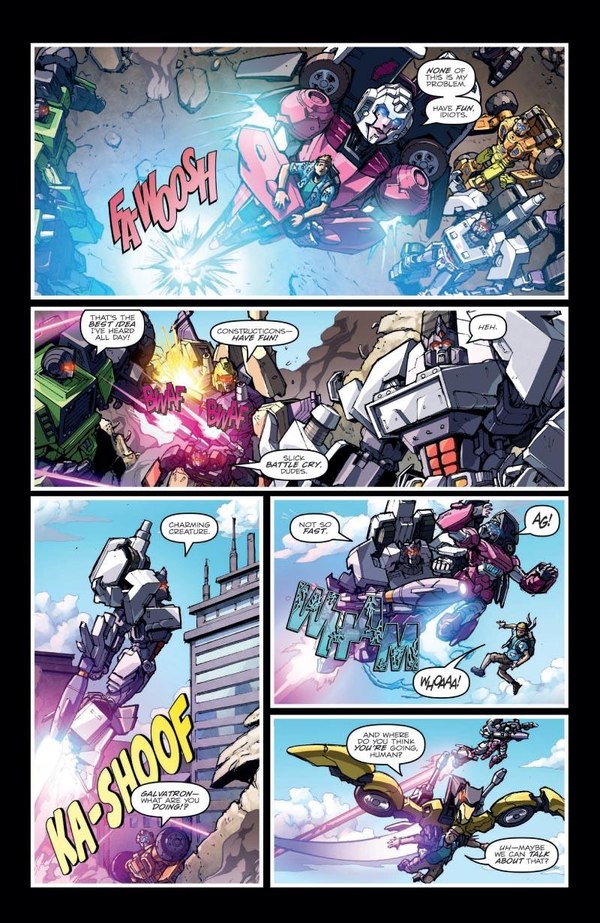 This issue does a lot of talking. There's a great deal of story information that needed to be established to move along toward the next Big Thing, and this issue basically exclusively serves that. There's little action or demonstration of ideas, just ongoing explanation from group to group. Blackrock spends his page space laying out what the Enigma of Combination does by citing examples of how it influenced human history and essentially made the world possible. This will obviously be key to know as we're on the verge of shifting to Combiner Wars and the effects of the Enigma are going to have to be a major element of how that gets going. EDC officers Faireborn and Jones are only even present in this sequence so Blackrock has someone to tell all of this to. They feel really inconsequential to the actual story, though that may be a step up from being the designated carriers of the Idiot Ball as they've done for a large part of their run as Representative Humans in the past nine issues.

Galvatron has a quick talk with Arcee, following the use of a very basic action sequence to just get them away from everyone else who might be inconveniently affected by hearing some of what Galvatron wants to say. In the process of this, we get an implication about the nature of gendered appearance in Cybertronians. It seems that the intent now is that in the ancient history there were female Transformers who probably went extinct somewhere along the way. If I were to guess, I figure that will be blamed on the civil war we saw pieces of in Alpha Trion's Storytime a few issues ago. So Jhiaxus making Arcee is now retconned to be an attempt at restoring something their species lost, much the same that his creation of Monstructor is now being treated as trying to rediscover combination. Ultimately how this factoid will be received is going to depend how much you felt that it needed explaining. It's an easy leap to assume that this information will be used to explain why there are female Transformers on Caminus. I don't think this matter ever needed to be expanded upon, and it could and should have been left at the point of "they exist." Saying this here doesn't feel like it does anything but throw it in dialogue for the sake of getting it out there. It's not enhancing the world used here, and I think that if it had to be stated somewhere along the way it could have waited for a different moment where it would have a more meaningful inclusion.

Finally, Prowl's conversation with Spike is a mess. Even accepting the idea that Prowl is manipulating Spike, since he manipulates everybody, what he says doesn't make sense with itself and it reflects horribly on Spike that he's being persuaded by any of it before Prowl drops the news of his dad having been killed. At which point if Spike had any doubts in Prowl they seem to entirely evaporate right there which is fully absurd. Faireborn is spared the Idiot Ball because it's been passed over to Spike for this play.

The entire time this is happening, Thundercracker is flying circles above the EDC base where he discovered the duplicates of Thrust and Ramjet being built. His presence is acknowledged, but even when they state he's nuts and they have no idea what he's doing, they take no action to get him to land or leave the area. They just let him stay up there with undeclared intentions for as long as he likes. Being a bit off in the head is the only way to make sense of Thundercracker being there, either. He found the construction site accidentally (which also no one seemed to notice him doing somehow) and has been sitting on the information for a while and suddenly he's decided to openly monitor the location, because...? It's almost as if he's being placed right where some important action is going to be starting, even if it doesn't make any narrative sense for him to be there at that specific time! Weird, huh?

Art is the solid Griffith showing as usual. The sequence of Arcee and Galvatron flying to low orbit and then falling back and the subsequent earth-shattering ka-boom particularly caught my eye. That is ultimately no small thanks to our colorists this month who did a very nice job highlighting the particulars of the events and making them really pop. Thomas Deer joined Josh Perez in colors this month, and to the credit of both, I can't discern where one stops and the others steps in. The styles are matched very well, and without the credits page I would never have known more than one colorist worked here. There's a two-page spread as Blackrock exposits which has a lot of details inserted (hi, Slicer!), and also has an unusual page layout with inset headshots linked by thick white lines, taking you from point to point while also subdividing the whole image in to sequential stages as you watch Blackrock and his audience-proxies move around the "showroom". It's a neat layout effect and certainly easy enough to follow, and it's something I don't usually see done in these Transformers books. I don't necessarily want it to become a common feature, but it's some nice variety of presentation. Finally, later in the book there's a big image when Devastator is formed which does a fantastic job of conveying the scale of the combined figure with its surroundings. Like we counted on for a key part of Dark Cybertron, Griffith knows how to make scale work and make huge characters huge. It is understating to say that it's a shame he is not involved in the Combiner Wars crossover given his clear skill.

Covers for this month are Arcee vs Galvatron on the main cover, by Andrew Griffith and Josh Perez. Implying a battle from the pages of the issue, but not exactly the way it took place, and it's a nice piece of artwork for the common cover, very eye-catching. The Subscription cover has Thundercracker and Buster sitting looking out over a canyon at night. Casey Coller does the lines and it's colored in heavy blues by Joana Lafuente. The coloring on this is fantastic, with the dominant use of blue setting not only the intended moonlight scene, but also giving the piece a lot of its feeling. Finally, the best cover once again goes to the 30th Anniversary cover. This is done by Kotteri, a Japanese artist with a really pretty style. The cover is a shot of Arcee and Prowl together against a starry sky. The composition on it, along with the character design and detail really makes the picture stand out even before the vibrant coloring. I'd definitely like to see more contributions from this artist.