The Autobirds and Deceptihogs have bigger eggs to fry than each other! But, will personality clashes and techno-organic glitches doom the alliance before it even begins? "Revenge of the Fowlin'!" is written by John Barber, with art by Marcelo Ferreira, colors by Nikos Koutsis, and flats by Mike Toris. 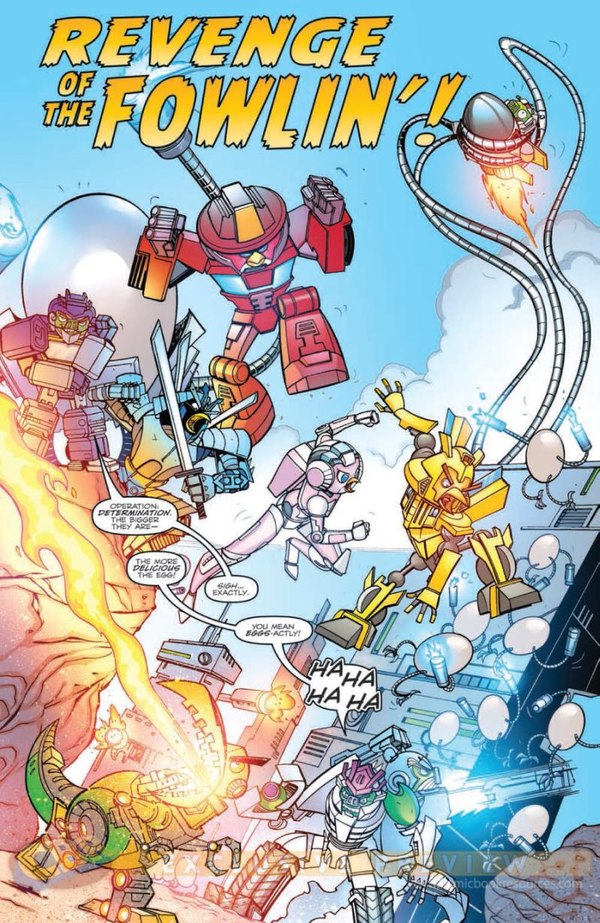 How long do you think letterer Chris Mowry waited for the opportunity to go full on 1962-Marvel with that title font?

In the face of the Eggbots, Optimus Prime Bird and Megatron Pig declare a truce: there's little they can do but work together. Teams are organized, with one party sent out to rescue Starscream Pig, and another to capture an egg for lunchstudy. Getting Autobirds and Deceptihogs to actually work together is about as easy as it sounds, and roughly as productive. Drift, Arcee, and Bluestreak Birds manage to cooperate with Lockdown Pig, but Bluestreak Bird gets ahead of himself- and captured. Heatwave Bird and Galvatron Pig come to blows, and Heatwave Bird loses a game of (ahem) chicken by accidentally discovering he has a Groot Mode. Elsewhere, Starscream Pig takes new prisoner Bluestreak's arrival as an opportunity to escape, and it is! For one of them.

This is the issue where you can tell John Barber is having a ball with this. Gags abound, inspired by Warner Brothers cartoons, Guardians of the Galaxy as I mentioned before, and even a Furmanism sneaks its way into the book. That's delivered by Galvatron Pig, who's depicted as something akin to his lunatic G1 cartoon equivalent and is the standout character of the month. A G1-crazy Galvatron is perfectly suited for the tone of this comic. In terms of a deeper story, the closest we get is that occasionally Optimus Prime Bird starts speaking of the situation as though he was just Optimus Prime. I expect we may get more information about that before we're done, but if we don't and it's just a tic introduced to feed the drama of the story (for a given value of "drama"), that's fine too.

Marcelo Ferreira and Nikos Koutsis continue on the art, and again I find them both well-suited to the task and also just fun. Ferreira continues to be crisp, clean, and still lively, though I almost wish his expressions would get even a little more out there. Koutsis leans a bit heavily on effects that I've seen overused by artists in the past- textures, filters, and light bloom -but while I think it's to the detriment of the lineart in places, it supports said lineart capably in other places, and never renders the book unreadable. And once again, everything remains clear and cleanly laid-out, and there's no trouble following the action at any point. Everything should be this clear, but especially comics for younger kids.

And I'd say this book once again succeeds at being that. It's not going to change the world of the Transformers forever, but it remains a decent introduction to that world, and has jokes on levels that work for kids, adults, and longtime Transformers fans alike. I feel like I'm repeating myself month-to-month, but that's the thing about this book: it's consistent, and consistently enjoyable.