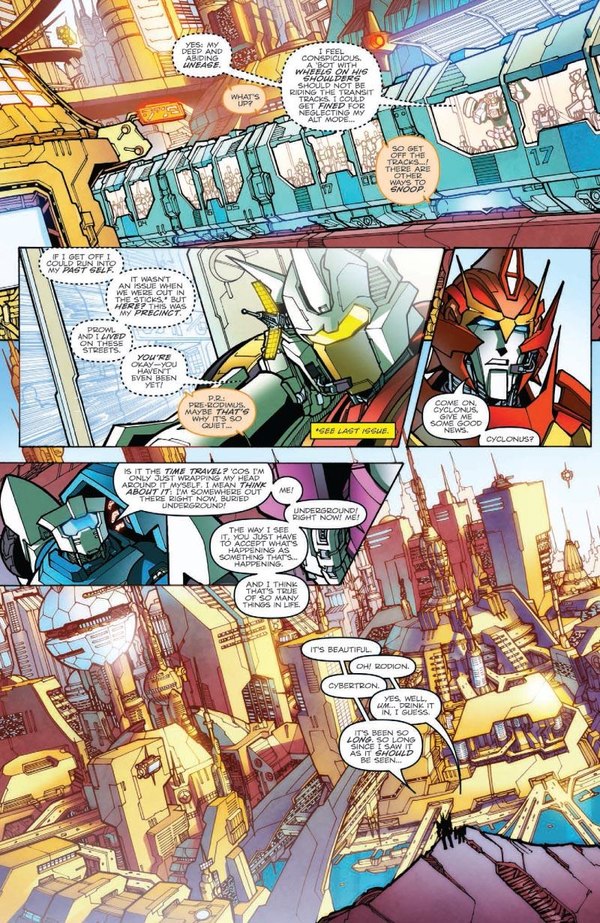 It's a two-page image with the next page, but this has a better look at the city.

On the day the body of Senator Sherma is discovered, the time traveling away team from the Lost Light surveys Rodion trying to locate Brainstorm who they've tracked to this period. As various team members are caught up in the sights and experience of this pristine, pre-war city, Brainstorm discovers his pursuers and is spotted trying to leave the city, leading Cyclonus to pursue. Brainstorm's time jump engages once again just before Cyclonus's missiles can connect. Following his jump, the team arrives at Maccadam's and again spreads out to try to be ready when Brainstorm moves against Orion Pax. But back in the present as the situation becomes more critical, Ultra Magnus and Megatron both begin to think their conclusions reached in haste may have been very wrong...

You may notice the credits line at the top refers to two prior issues, and indeed there are reprinted pages included because they represent not just the time periods being visited this issue, but also specific scenes that one or more present-day characters ended up in. And at least one of the two used here is pretty plainly preplanned. If you go back to issue 9 of MTMTE, the start of the Shadowplay story, you'll see Rung sitting in Maccadam's tinkering with a model of the Lost Light, which Nightbeat sees him do from outside. At the time that meant nothing. Rung was known to have been in that area at the time and has always had an interest in model ships. Jump forward to the end of Dark Cybertron when Nightbeat questions Rodimus about where he got the Lost Light after seeing the real thing for the first time. That was a curious inclusion and led to brief speculation about whether the ship had some strange secrets left to it. But with the context of this issue it seems to be a vague foreshadowing to the time travel and that a lot of what's going on was effectively pre-destined. Our looks back at the past are showing us a history that was already touched by the time traveling parties. Nightbeat questioned the origin of the Lost Light because he saw a model present-day Rung took with him back before the ship may even have existed at all, and Nightbeat remembered that upon seeing the ship itself upon his return from the Dead Universe.

I have a harder time saying that the other reuse was planned from the time that material was written, but it was still made to dovetail really nicely and show that even a portion of the changes Brainstorm is trying to cause end up leading to the events he was trying to disrupt in the first place. Brainstorm is making the history that he's set out to change. It's a certain kind of writing, and a certain kind of way the fictional world exists in the mind of its creator that leads to this, and I kind of love seeing it get a chance to be expressed. With this we're getting a good sample of the long game that has been the writing of More Than Meets The Eye. A few issues ago we had paid off an element from issue 8, which carried on an intended outcome from the events of issue 1. Elegant Chaos is another part of that plan, since the quantum duplication and its results carried necessary contributions to get to where we are now. We're at the turning point right now and everything's pointing towards the finish line and it's done so in a way I think worked quite well. But part of me almost wishes this could have been a longer process. Taking time to have longer visits and narratively explore the spots a little bit more. There feels like there's a lot of ground that could be covered using this story mechanic and while for the purposes of telling the story you have plenty to accomplish that, it's a bit of a shame that we couldn't play with it longer.

On the art side, this issue is a delight. The environment of the city of Rodion looks beautiful on every level. From a two-page-wide long shot of the whole city that you can almost join Cyclonus in being awestruck by, to the skylines in the background elsewhere and then finally down to the street level view, the detail is superb and the scenic design and styling of the city elements just looks so fantastic. Alex Milne outdid himself here in background elements alone. The page layouts almost match the title of the story arc, because they have so much to get across in the limited space, there's a sense of coordinated chaos about it. Don't let the description mislead you, the structure of the pages works in most all cases and it's impressive how so much stuff can be arranged and still be cleanly readable. It seems odd then that a relatively simple flow of panels ends up being what feels awkward to follow. That's less for how the page is arranged, but more that the actions conveyed seems a little bit vague and don't exactly mesh with what the dialogue has said happened. Between the two it feels like stages are missing and it sort of stalls the flow.

Coloring is great. Milne's detailed city is brought to life by Joana Lafuente's colors, giving us this view of a gleaming city that shines outward, and with every step, every layer down you go, it gets a little bit darker, as far as an alleyway almost fully in shadow with only a little bit of ambient light making it through the gaps between the buildings. It also feels like some of the background coloring is trying to match a little to how Josh Burcham used to color the book, which might be a consideration for two pages of art with his colors being used in the middle of the new art with Joana's colors. I might be imagining it, but while the page wasn't recolored, it does seem like the colors are a little more saturated than they were originally. Hard to be sure, but I would not be surprised at all by some behind the scenes consideration being given to make everything blend as best it can. Unfortunately there is one small goof in the coloring. In a panel that shows Cyclonus recalling kicking Tailgate (from way back in issue 4!) that is fully new art, Cyclonus is colored according to his current, more complicated model including the glow lines around the abdomen, which itself is silver now where his torso was solid purple at that point in the comic. But if the art is new, we can always handwave it as saying that Cyclonus's mental image of himself as he recalls the event is just being kept up to date with his current appearance? That ought to at least work until the collected volume with this issue finds his torso all purpled in for that panel!

This issue on covers we have a thing that didn't happen, as Impactor bursts through a window, drill-hand first. But given the event visited this issue I suppose it's a fair representation of the idea of Impactor getting in to a fight in the bar. This cover is drawn by Alex Milne and colored by Josh Perez, and it's very okay! The art is nice, but I don't know that it would have been my first choice for a main cover. Sure is eyecatching though, and that's what really matters.

The Subscription cover is by Nick Roche with Josh Burcham coloring, and is a portrait of the two Heavies that have popped up a few times in this time period. The art is pretty simple in a beneficial way, afterall those two aren't the most complex designs, and the coloring is equally basic, giving each a basic flat color to distinguish them in a subdued palette to sell the night time.

The 30th Anniversary Cover is another Kotteri piece with Tailgate, Cyclonus and Skids at Swerve's. The art is nice, but I find I don't like this piece quite like I did the Prowl and Arcee cover on Transformers 37 previously. The extreme angle may not be helping anything, but something about how Tailgate and Cyclonus look in her art style isn't sitting right with me. Skids looks pretty great, on the other hand. Excellent facial expression and posing. Really, everyone is posed well, Skids just reads as the best because his design in Kotteri's style comes together better for me.

So as of this writing (Feb 2, 2015), Previews lists More Than Meets The Eye 38 as shipping to stores on Feb 11. Meaning thanks to the odd string of delays that happened in January and pushed this issue to first week February, we have only one week's time to wait for the conclusion of the story! The extended wait between 36 and 37 was unfortunate, but given where we leave off on this one, I think it might work out for everyone's sake that there's just a week between 37 and 38. See you back here next week!