Things get hairy as Trypticon and Fortress Maximus both come gunning for Metroplex! Can the Autobot/GI Joe alliance stand firm against the Decepticobra forces? Tunnel Rat's Fantastic Journey To The Center Of Fortress Maximus is written by Tom Scioli and John Barber, with art, colors and lettering by Scioli. 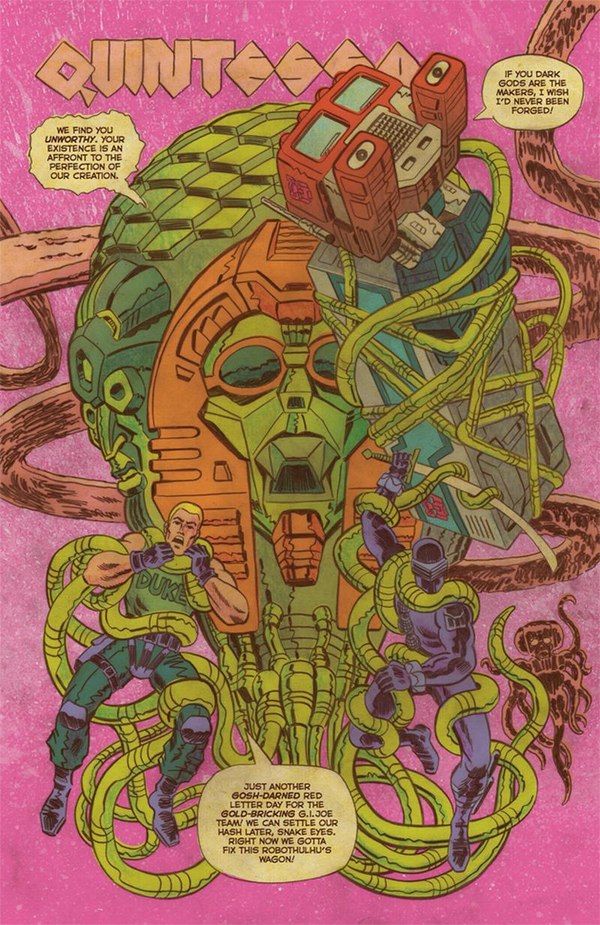 Tom Scioli refers to this form as "Optimal" Prime: a mode suitable for otherdimensional survival.

Duke and Snake Eyes find themselves caught in an argument between "Optimal" Prime and a multifaceted, otherworldly horror from another dimension: Quintessa. On Cybertron, Megatron decides to sort the Autobot/GI Joe alliance once and for all with the combined might of a brainwashed Fortress Maximus and Trypticon. On Earth an unseen rescuer springs Tomax, Xamot, and Major Bludd from Blackwater Prison while Storm Shadow tries to take General Hawk's tomahawk... which was apparently once a mark of command for Transformer-worshiping Vikings. Tunnel Rat makes his way into Fortress Maximus in search of the U.S.7, the GI Joes' team of highly-trained pets. But what the Joes find in Fort Max's brain...

This is where a lot of characters introduced in different scenes and areas are beginning to converge: Rodimus, Duke and Snake Eyes, and many more all end up in the big fight on Cybertron. And it's quite a fight, fought in a dozen ways on a dozen fronts. Attention is drawn from that fight at points by scenes in the Quintesson dimension and back on Earth- it all seems as though it'll add up eventually, but it's all over the map, a bit moreso than usual even. On Earth we get a hint as to Cobra Commander's fate and also to the identity of the Serpentress. It's not a surprising identity, but it's hinted at elegantly without many overt clues. Optimus Prime is not yet fully present in the narrative, more or less having left Cybertron for parts unknown long before the story began- but it seems as though next issue he'll rejoin the story in full force.

Visually this issue is still more than engaging with huge, information-dense scenes - but I feel like this is the issue where the visuals and their superspeed pacing finally get ahead of themselves at points. There's an event that falls between pages near the end of the issue, and while the book makes it clear what has happened I find myself wanting to know more about how. Other events are less conspicuous in their absence, but there's almost more happening between panels than happens on-page at this point. For example, despite Tunnel Rat's mission into Fortress Maximus making the cover, Rat appears maybe five times in the course of the comic. The most is made of those five panels and you can figure out what's going on, but again this is just where the density of story got to me. In terms of the overall direction of the story, I wasn't really expecting the overall outcome we got, but I suppose it's too early in the game for anything else to happen. There's a bunch of interesting things happening, and I'm hoping that the characters having less physical distance between one another may help lend a bit of focus.

Visually, this is of course still amazing. Besides the Transformer-worshiping Vikings straight out of a Jack Kirby comic, there's a page titled "Quintessence: The Mind On Trial" showing little slices of Snake Eyes, Duke, and Optimus Prime's histories, and it puts me in mind of Steve Ditko's best work of the 1960s. There's a page with a holographic readout where Scioli essentially breaks the visual rules of the comic - using bright and clear colors overtop the faded `70s comic aesthetic - to make it pop like it's really light hanging in the air in front of the character. There's a take on Optimus Prime using his trailer as wings as the modern versions do, except using the G1 model, that is both cool-looking and pretty funny. (Plus he has a Minecraft Beam Saber, and how can you not love that?) And on top of all else, we've got some Beast Wars references as well. As always, the brilliance of the book is that everything is working together to tell a story, from the dialogue to the panel layouts to the art even to the sound effects ("Co-BROOM!").

The commentary was more helpful than usual this month and offers a key insight to Scioli's comics approach: he likes to let readers work at their own pace and take as long as they need to absorb what's going on in a panel. Personally, I feel this would work better in hardcopy format than on a computer screen- but nothing about this comic makes me surprised that it'd work better in print. Other bits of information help clarify certain between-the-panels happenings; interestingly, something that John Barber has interpreted a specific way isn't necessarily what Scioli intended. On that one major point, we'll presumably find out the definitive answer soon.

Covers are pretty nice this month as well. The main cover by Scioli spotlights Tunnel Rat and Fortress Maximus, and shows Rat crawling "inside" Fort Max as represented by the field of blue his head is sitting on top of. It's clean and it gets the idea across well. The subscription cover by Nick Pitarra shows the Joes tangling with Soundwave - some of them literally, as Lady Jaye gets caught up in Soundwave's Cold Slither mixtape. Jamie Tyndall delivers a Zarana pinup for the Yesteryear comics exclusive. Then the retailer incentive cover introduces us (well, it introduced me) to artist Derek Charm, who does a great cartoony image of the Joes and Rodimus in a style that almost feels the polar opposite of Scioli's it's so sleek and clean. This is another artist I'd love to see work on Transformers in the future, because I feel like there's a lot of great potential for Charm to, well, draw Transformers that live up to his name.

It's definitely not a bad issue, but it was hard for me to follow this time around. There was a lot of ground to cover (and I suspect there always will be), but the fact that major players are converging will probably help things next issue. But on the bright side, I can absolutely not foresee a time when I find myself saying "nothing actually happened this issue." I think I can live with some confusion in exchange for that.