All Earth-bound Cybertronians converge upon Wanmu: Prowl and the Constructicons to retrieve the Enigma, Galvatron and the Decepticons to stop anyone from possessing it, and the remaining Autobot team to retrieve Devastator and stop them from escalating things any further. But are they the only ones seeking the relic...? "Onyx Interface - Conclusion: The Obliterati" Written by John Barber, art by Andrew Griffith, and colors by Josh Perez. 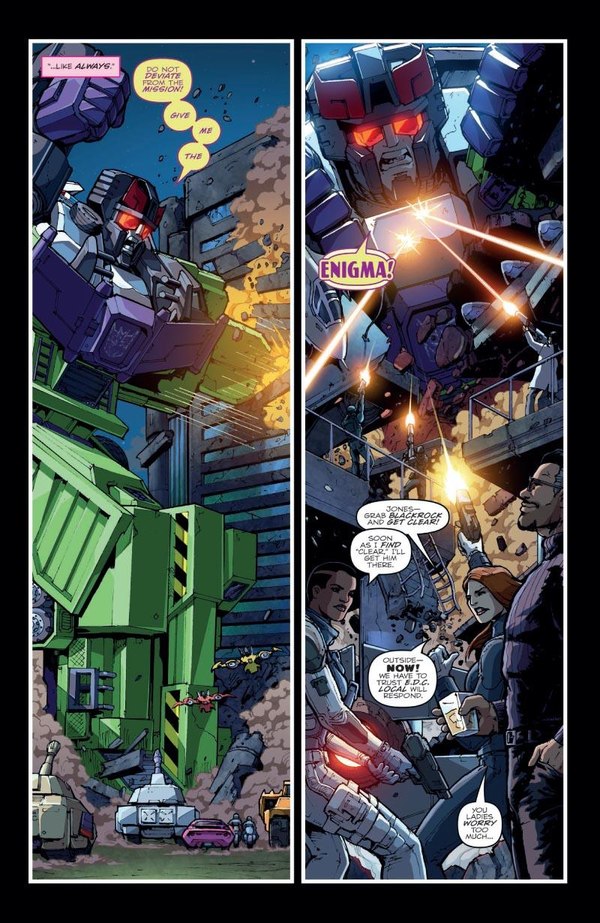 Today, "scale" in reference to Transformers is not a four-letter word.

Galvatron and Arcee land at Wanmu with the Decepticons. Devastator tears through Blackrock's Wanmu facility, defeating his security measures and taking custody of the Enigma of Combination. Being attacked by Galvatron's forces and the humans on site, Devastator is uncaring as his attention is split between possession of the Enigma and a growing impulse to kill Spike - which eventually wins, causing the combiner to abandon his prize and attempt to murder the human that all six robots hold a special hatred for. Meanwhile Thundercracker is the only one who can pursue the army of seeker drones prematurely activated by Blackrock, but even as he promises to save the world - again - he's overwhelmed by their numbers and has to call in specialist help to end the situation before it leads to the destruction of everything.

I'm gonna go ahead and lead with that I think Thundercracker and Soundwave are probably the best characters in the book at this point. And it's their specific interactions that sell both of them. They're the only ones who come across as wholly genuine, where everybody else with any prominence is speaking out one side and carrying an opposite agenda on the other. Soundwave and Thundercracker are talking exactly what they're out to get, but they're at different places with it. Thundercracker has had a peaceful life on Earth for years and he's driven by the desperate need to protect that, and in the process trying to help protect the world that he gave up everything for. Soundwave wants the same thing and is having to more and more carefully balance all the elements involved in getting there. Their positions are really interesting and compelling, and there feels like there's a great depth to explore in this premise. But this is basically a side plot right now, being minimized for the sake of pushing a bigger thing with less interesting players. I really, really hope that the brief touches on this piece of story are advance set up for stuff we'll see after the Combiner Wars tie-in is over with, because this could take The Transformers back to where it was with the early issues of when it was still Robots in Disguise and was taking a lot of new ground in the kind of story it was telling. We could get that again with some focus time on this band of Decepticons who, through Soundwave could take a very sympathetic appearance. Especially if things keep on as they are right now with the humans ending up being played more as the villains. The fact I could go on for an extended paragraph about this idea that's largely based on about five pages of comic between two non-consecutive issues to me seems like proof of concept for the potential. Anyway...

For the main plot, there's a lot of space given to not a whole lot, but one or two meaningful things come up. What's been up with Prowl the last few issues is laid out pretty clear, with the intent being all-but-said in the course of this. If interpreted correctly, this is another puzzle piece that needs placed for the sake of Combiner Wars, but it at least is an interesting potential consequence of Prowl becoming part of Devastator and more and more willingly using this power. But the Decepticons accomplish basically nothing with their presence. They launch some token shots at Devastator, but have no impact in making him stop his attack, they contribute nothing to getting the Enigma out of Prowl/Devastator's hands, and none of them seem to really care to try to secure possession of it after Devastator tosses it aside. Galvatron's whole motive is to keep anyone from using the Enigma, but barely pays it any mind when we finally get to that moment; everyone is focused on bringing down Devastator even while Devastator is ignoring them and not even holding the thing they want to take away from him. It doesn't work for me the way it's presented. Everyone needs to be distracted from the Enigma so Plot can happen while they're not looking and while that's not inherently a bad thing, it needs to be structured so it's not so obviously happening. And speaking of meaningless to the plot, here comes Sky Lynx, Kup, and Sideswipe. Surely this was some kind of homage to Furman, as the vast predatory bird just hovers there until it's time to stop. Outside of Prowl and a little Arcee, the Autobots have been so inconsequential to this story arc that they're turning up just as a reminder that they're still here. The most Sideswipe has appeared at all is Arcee wearing his rocket pack, and I'm probably not even exaggerating!

In some hope for future storytelling, it looks like whether or not Blackrock loses the Enigma is unimportant, as he can be seen to activate the "Earth Enigma" command using the Onyx Interface software he was press-conferencing in his debut several issues ago. Given what he revealed about the Enigma of Combination last issue, it seems very much like he's had the Enigma's effect reverse engineered and the important aspects incorporated in to his operating system which he promised would incorporate itself in to all facets of every day life. If Prowl's intent with the Enigma was to impose his sense of order over the Cybertronian race, Blackrock may ultimately be aiming for a similar goal. Though I think there's a possibility he may be seeking the same outcome as he explained the Enigma had been used for through history, and uniting human intelligence for some yet-unknown end. Taking the power that he said allowed small groups to create the internet or split the atom and applying it to millions or billions of people at once. Either option basically turns Blackrock in to a James Bond villain, but they differ in how interesting and creative that result might become. I'll cycle back around to where I started and express my hope that somehow Blackrock vs Thundercracker, Soundwave, and the Decepticons makes up a meaningful component of the next story arc after the crossover. This might be the means to actually make human involvement in the current IDW setting really interesting.

Art side, Andrew Griffith delivers. There's great scale sense with Devastator, the building he's splitting, and all the regular-size Transformers and other smaller objects sharing scene space. Soundwave appears in Africa with a bunch of elephants which is a really weird image objectively, but is drawn so well that it just sells without taking the time to think about how odd that situation is. In fact, it's a bit of a shame that all the times we see this, the shots are kind of tight, because some wider angles with more of a look at the surroundings probably would have done nothing but improve on it. The air battle of Thundercracker and the armada has a really nice simplicity to it. There's rarely more than a couple of drones up close in panel, typically you see them from more of a distance and in numbers, and it carries the idea well that Thundercracker is moving through different parts of the group fighting them. It finishes in a full page image where Thundercracker is the only figure close and in detail and I really love the composition of the shot. There's a lot of good stuff in the art this issue because there's so many different things happening and Griffith comes through with his expected level of quality and delivers it all excellently.

Josh Perez likewise knocks the colors out of the park. Soundwave's scene is at sunset, and the coloring is just beautiful for it. Thundercracker is amazingly backlit by an explosion, and toward the end there's a really great panel where Galvatron is lit by the flash of a teleportation that looks just as good. It's not just lighting effects though, all the coloring in this issue seems a step up from where it usually is. Where a lot of times I think the saturation of the colors makes things bleed together just a bit, just enough to start to make the art harder to read, everything has this nice definition the way it's colored in this issue. I don't know if Perez consciously did anything different coloring this, but it's some of my favorite work from him that I can remember. Really top notch stuff this issue!

On covers this month we have nothing actually representative of the issue! The main cover has a direct physical struggle between Galvatron and Prowl for the Enigma with Arcee trying to get in between, which is also a Griffith piece. It's a nice image, and almost something I wish would have happened in the issue itself because something about this stuggle down to literally the last moment for control carries some appeal to me. The subscription cover is Devastator amid wreckage and a pile of bodies looking shocked at what he's done. Again, nothing at all like what actually happens. And while I could see Combiner Wars going this way somewhere along its run, it seems like something that couldn't reasonably happen yet. It's a cool image though, and I think would have made an equally good choice for main cover. This was drawn by Casey Coller. Finally, the retailer incentive is an art piece of Optimus Prime by Jeffery Veregge. There's a matching style Megatron on MTMTE 38. This may not be a highly demanded cover like some incentives easily would be, but I think some of the reading audience will definitely be looking for this one.

Next issue, the crossover starts, Earth is likely to be ignored again for some months, and Livio Ramondelli is back. At one point or another I think I'd have looked at at least two of those things in a positive way, but right now I have reservations about all of it. Interesting things are being set up on Earth that I want to see explored, developed and hopefully paid off before the Next Big Thing comes along to derail the story, and while with six issues I can hope Combiner Wars will have better overall pacing than Dark Cybertron, I still fear it won't. Check back in a couple weeks to find out!