The end of the journey takes them to the beginning as Megatron's life hinges on the outcome of the confrontation between Brainstorm and the Lost Light's away team, but has irreversible damage to the fabric of reality as we know it already been done? "Elegant Chaos, Part 3: Predestination: A Beginner's Guide" written by James Roberts, art by Alex Milne, with colors by Joana Lafuente. 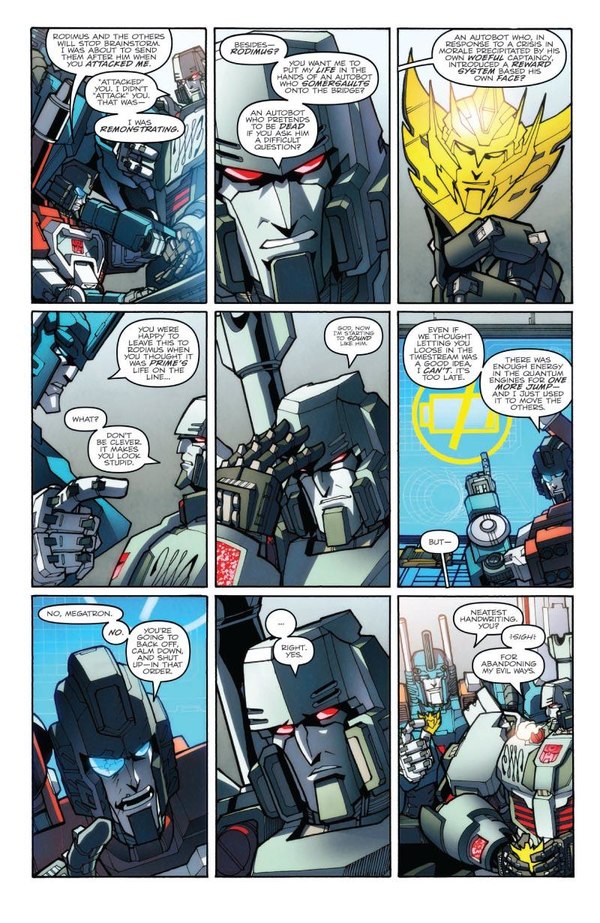 These three need to team up more often from now on.

Having worked out Brainstorm's true final goal, Megatron demands to be time jumped so he can save his past self - completely vulnerable in the midst of his construction. But even violence driven by the heat of the moment can't change facts: There's only energy enough left for one jump, and Perceptor has already sent Rodimus and the away team to the last stop. Arriving with a bang, the team manages to disable Brainstorm, preventing Megatron's death. But the present is still on the verge of collapse, leaving Perceptor no choice but to take drastic action to try to preserve the reality they know. And with the Lost Light's engines already depleted of power, even if there is a future to return to, the travelers have no way to get back there.

Let's see how much I can say without giving anything away. Because much like was the case with the Lost Light's quantum duplication, it's possible to work out a lot of what will happen in this issue based on hints left through the whole process, so long as you're paying attention enough to look for it. But just like it was that time, there are still surprise turns involved that stop it from feeling like everything was called ahead of time and nothing is left to be interesting. While I cannot recall the source to cite it directly, James Roberts did say at one point that Brainstorm's briefcase would in some way be used as an emergency exit of sorts if the situation required it. Essentially that if More Than Meets The Eye would be canceled or otherwise go through a change that wouldn't let the intended outcomes happen, the briefcase was the key to wrapping up the essentials in a pretty quick order. And though I don't want to assume that the entirety of Elegant Chaos reflects the sum of these plans, it's very plain once you get in to the meat of the issue that some of those intents are being played across - some even wrapping up threads you didn't realize were things until now, and others being very clearly necessary resolutions. I can't say that all of it flows over as smoothly as maybe it ought to. Indeed, the origins as an escape hatch are kind of present for how some things seemed rushed to be included, but given the necessity of the setting to carrying them out, some couldn't easily be adjusted to take place elsewhere at a more favorable pacing. And in truth the fact that one of the possible endgame scenarios is now over and done with and the book still has an indefinite life ahead of it is a net positive. It means that for even this little bit the book is less beholden to a piece of the original outline. This bullet point isn't hanging over it needing story to be guided in its direction. With this moment finished without the book finishing alongside it both speaks to MTMTE doing well enough that this specific "out" isn't needed anymore, and that we can start getting on to other directions of story that have been laid down subsequent to all the starts that are wrapped up here. Again, I can't really say anything specific to the contents of the issue because there's important things I would utterly ruin by even beginning to hint at them, but while some are likely to look at the outcome here as perhaps an anti-climax just based on being able to read the signs, it's better to view it as the story turning a corner by settling old matters and heading off for the new. And like I said, the outcome is not without surprises to be had, so don't think that you're going to go in and know everything coming at you.

The art had a lot to convey in the typical span of pages, and it shows. This is a positive and a negative. Positive for that Milne could make all the needed visuals happen within those confines and still more or less make things clear at each step. But the negative side is that most pages struck me as being rather crowded with panels because so much had to be going on. Some things I think would have benefitted from having more space to be expressed. Again, Milne did a fine job making the space he was given work as well as possible, and it's only because it was done as well as it was that I feel like I want to see a little bit decompressed version just to see how much better still it might have been. This is going to be a kind of light art commentary for this issue just because while there are many great visuals I'd love to call out, most of it is too potentially spoily for my comfort. Within the confines of the pages covered by the preview I can at least point to the Grenado for a fun pair of panels (and bonus points to letterer Tom B Long for the BOOM that brings it together). I can also point out that I dig the workshop area most of the issue takes place in for the detail and variety in its design giving a fairly small set a lot of different looks by keeping the focus tight and moving around it different ways. There's really a lot of intricate detail at various points that seems to especially stand out not just in the workshop, but other locations seen in the issue that I can't say anything more about. For colors, Joana Lafuente's bests are all too important to call out specifically, but suffice to say everything I always praise her work for can be found in this issue just as good as ever. One thing I can note, there's a well done distinction between the kind of lighting in different places. Not even a matter of how the light falls on someone, but the quality of it. Inside the Lost Light you have still fairly harsh light (though Joana still makes it softer than Josh Burcham did) and elsewhere the conditions can be very different and it's not just the shading, but the palette adjusts with it. She's taking in to account, for simplified comparison purposes, the difference in how color would be perceived under fluorescents and natural daylight, or incandescent or halogen worklamps. It's really apparent when you get pages with a lot of panels divided between different locations and each one consistently keeps that up. It's an amazingly impressive attention to detail to me.

Finally we've got covers. The main cover has Brainstorm looking at his smoking gun with a figure lying in shadow in the floor. It's obvious enough how that's meant to represent the interiors, although once you've read the issue you may interpret the body language a bit differently than it initially seems. Subscription is a Nick Roche piece, with Rodimus panicking and trying to keep Whirl and Rewind apart - at gunpoint. Interesting image, though apart from all three characters being present I can't say it really reflects any situation within. And the retailer incentive is the Megatron equivalent to an Optimus in the same art-piece style which can be seen on The Transformers 38, this done by Jeffery Veregge. As I noted in the other review, this style is sure to appeal to someone, but is probably a good choice for an incentive cover since it's probably not an image that would be desirable to the general readership.

Y'know, looking back over the issue, I kind of feel like there could have been another installment to this story arc. Like I mentioned, the art was a bit cramped because there was so much to show, and the thing is, we have in the issue a pretty natural place to split the story in to two chapters rather than doing it in one pass like this. I'm not usually an advocate for decompressing, but it might have been to the overall benefit to play the ending a little slower, give some more space for stuff to be developed out and wrap up the arc. Kind of a shame, now that I see it. But, if I have to take a slight rushed feel on the end of a storyline once in a while to have it otherwise not be Regeneration One or Empire of Stone the whole rest of the time, that's a deal I can and will gladly live with.