The two indispensable and out of print resources for Transformers: Animated have been combined with new supplemental material to make a definitive reference. Transformers Animated: The Complete Allspark Almanac is the final word on the series by Jim Sorenson and Bill Forster, with contributions from Marty Isenberg, Derrick J. Wyatt, Eric Siebenaler, Aaron Archer, and more! 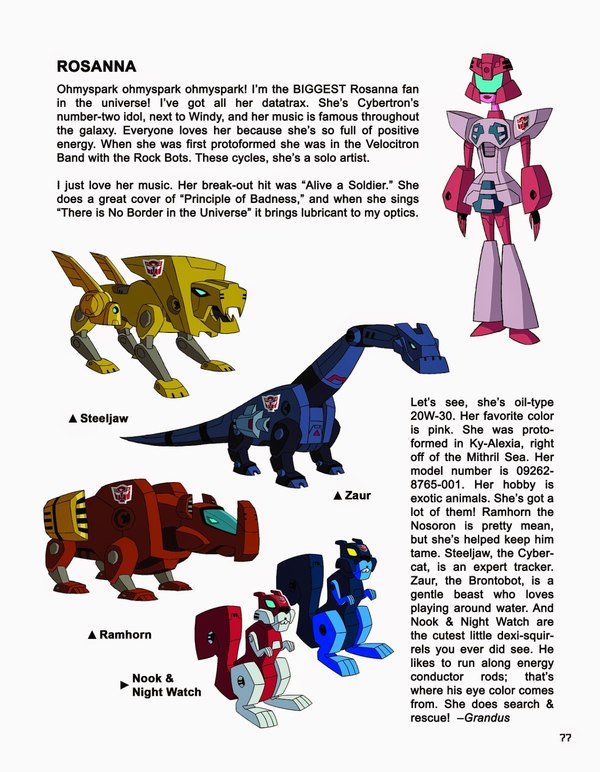 A good example of how the bulk of the Almanac operates.

The book is divided into two basic sections: Part One systematically covers every aspect of the show - characters, events, culture, settings, and so on- all from an "in-universe" perspective. Nearly every major character gets a chance to give us their take on other characters and happenings in the show, and even minor characters are given the chances to describe one another. It's a great approach, and one that keeps the Almanac from being dry in the way that many comprehensive animation guides tend to be - and that Transformers Animated as a series never was. The character designs are particularly extensive, with designer Derrick J. Wyatt going so far as to provide finalized art for characters that were being considered for inclusion in the series proper but never used. The other real standout of this portion of the book is the "Events" section. It includes every episode, along with the Fan Club-exclusive fiction and even the six issues of The Arrival, the comics presided over by series head writer Marty Isenberg. And all in proper chronological order. And to keep with the spirit of the series and the in-universe presentation, the episodes aren't presented as just reports or synopses, but occasionally as magazine articles or other "found" items - in one case, as a cereal box. ("Garbage O's!")

And of course as a book made by and for fans about The Show Where Absolutely Everything Gets A Cameo, the Almanac is crammed with in-jokes and references - not just to Transformers in all its incarnations but often to other things as well. From a map of the universe which features a great many stops known to IDW fans to significant numbers to names dropped here, there, and everywhere, there's a lot to find for yourself even if you know Animated through and through. There's an "Annotated Allspark Almanac" page that lists the references in the individual volumes, and I've no doubt that this definitive volume will end up with a definitive list in due time.

Part Two is briefer, but deals with the kind of behind-the-scenes real world information I love to see in guidebooks. From the Transformers: Hero concept designs that led Hasbro to pursue a new visual style for Transformers, to Wyatt's early explorations into the style, to the toy designing process, to unproduced toys, to the plans that were beginning to form for the never-made fourth season, this section has a wealth of information about the behind-the-scenes processes that went into the making of Animated. Another favorite - in among all the unproduced episodes and toys - is the style guide given out to licensors showing the appropriate logos, art, and even fonts to be used on their products.

Overall, The Complete Allspark Almanac manages to have it both ways in being both a colorful supplement to, and thorough documentation of, what may yet be the best Transformers series made. Leaving dry and factual to Wikis, it sets out to make a book as interesting as the series it's based on - and largely succeeds. I had never gotten the original two-volume release, and that seems to have worked out to my favor in a way. At $40 for nearly five hundred pages, this is a perfect companion to the Complete Series, finally available on DVD from Shout! Factory as of last year. It's a pity that Animated occupied a relatively short time in the history of the Transformers, but it will be remembered fondly - and if it inspired fans to do work this involved, affectionate, and authoritative, there's no way you can call that a failure.