Release Data: Released in the United States in December of 2014 at a suggested retail price of US$9.99

In fairness, what could Tailgate have really been reused as if not Windcharger? Granted, in a way Takara answered that question a few years ago by making Reveal The Shield Windcharger in to Marvel comics character Wipe-Out. While that's probably a little too far afield for Hasbro, it would work a little better using Tailgate's mold than it did just making a black Windcharger. But despite the collective yawn of disinterest this Windcharger received when it was unveiled at Botcon 2014, this isn't something that should be easily overlooked.

It's hard to look at this and not realize that the majority of details were made specifically with Tailgate in mind. The thin legs are certainly out of place going by toy cues. But if you give it a chance it can really quickly stop feeling like just a reskin. Think about the cartoon design, Windcharger's legs weren't super thick. Apart from the feet being too small here, the only thing really keeping this from passing as an animation model inspiration is the shins being red and not light grey. As-is, the shins are painted dark grey over the red plastic to resemble the color breakdown of the previous toys' legs which used the louvered rear window in this position. And at least as goes comparison to Reveal The Shield Windcharger, Combiner Wars is a little more accurate in the torso by lacking the folded down hood-chest and keeping something inspired by the original G1 toy details. 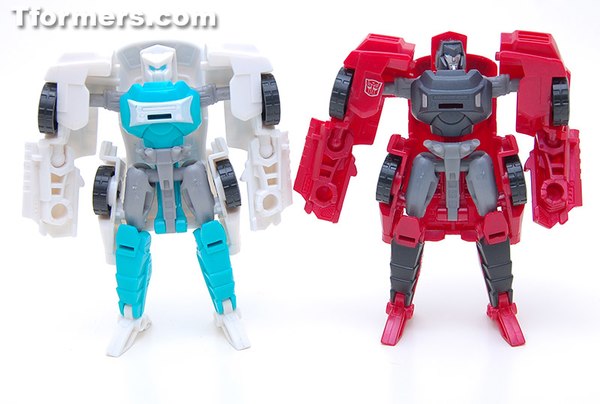 The new face sculpt carries the appearance of Windcharger well enough. It doesn't particularly conform to any particular appearance, instead seeming to combine some elements to achieve a best-of. The helmet outline seems to favor the Scout-class toy more than anything, while the face has a blend of qualities from cartoon styling to some touches of Alex Milne's take on the character from his occasional appearances in More Than Meets The Eye. On my instance of Windcharger, the face is detailed very well. Impressive given that the helmet, face and eyes are all realized in paint over a base of red plastic. The applications are clean and consistent enough that you wouldn't even immediately realize none of these are a cast color.

While this does make a surprisingly effective representation of Windcharger despite the mold being designed distinctly to exist as a comics-derived Tailgate, the functional side of the toy fares little better. The huge shoulders easily run afoul of the car roof backpack, or the head, or even the very struts connecting them to the body, all of which obstructs poseability. The square shape of the car-hood bicep and the door-panel forearm make the swivel range on the elbow ball joint difficult to use to any significant degree, and the quarter panels on the thighs are repeating the action of the shoulders by smacking in to other pieces of robot anatomy and limiting the effective movement of the joints. But some things are a little better in this instance of the mold. The hinged pelvis assembly is much less prone to popping apart from the torso than was my experience with Tailgate, meaning that for as much as you'll be able to pose the legs you won't be needing to replace unintentionally moved parts afterward.

Much as I did with Tailgate, I'm going to recommend leaving the car roof panel halfway between robot and car positions. This moves it off the back a little. Just enough to allow easy access to the head to use the neck joint, open more clearance for the shoulders, and get out of the way of the thigh junk. It also drops the windshield a little more out of view from the front, giving some added definition to the upper body instead of leaving the shoulders and back of the head to all be blended together in a sea of red. Aesthetically I prefer this arrangement even aside from the small functional improvements it offers the toy. 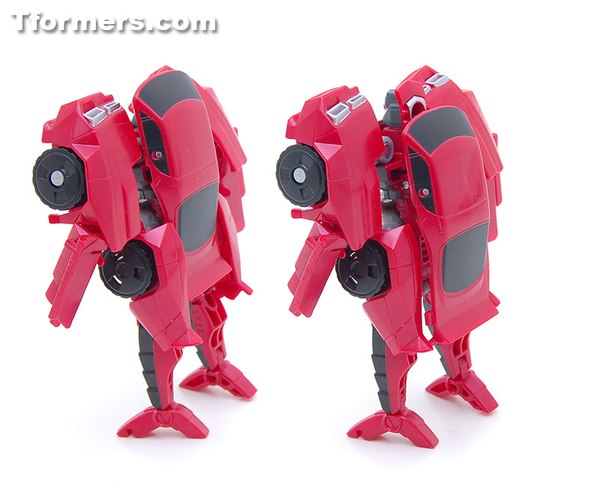 I've found Windcharger doesn't transform as smoothly as Tailgate. The underbody parts tend to not want to all line up how they need to. Some elements can be left alone and not be a problem in favor of more important things being prioritized, mainly the body panels of the car. But it's an unfortunate consequence of the changed plastics that what was a very solid secure process and outcome on Tailgate really isn't anymore.

I avoided talking too much about the deco in general in the robot mode because I think what it accomplishes is so much more important and relevant to the vehicle mode. In robot mode, it's just a Windcharger deco, it's no big deal. But for the vehicle mode, we have to think back to Tailgate. Tailgate's bright white car body with silver painted windows and just blue flames on the front half was a really bad deco. Most of the car lacked any meaningful contrast and it all bled together in a mass of concentrated boring. Takara's take is even worse by omitting the flames, though it balances it somewhat by making the windows black and creating needed contrast. Just not much in the way of visual interest. Windcharger has no more paint, and even less "apparent" deco for the vehicle mode, but the red body, black windows, and silver highlights in the front end do everything needed to keep the car visually appealing. This is the one most important thing that I think this redeco brings to the toy: it makes sure both modes look equally good in a way that could have been accomplished with Tailgate but wasn't. The red has a really nice visual quality too. The slightest translucency, a bit of swirl, and a shade that suits the car well anyway. The swirl and translucence give it a sense of depth and richness. You wouldn't mistake it for being painted, but it doesn't just look like bare red plastic either. 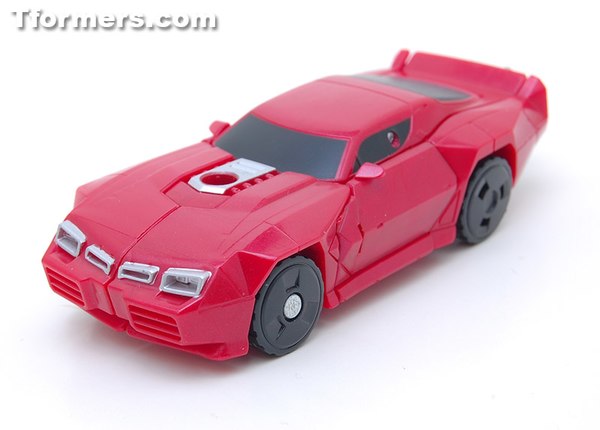 Meanwhile, the vehicle has no new parts added. Some elements are differently paint highlighted to look distinct from Tailgate, but it's physically all the same. The vehicle generally holds together well. Again, it can be a choice between whether having the body panels together or getting the underbody locked up. If you opt for the car body, the things having to stay loose underneath still aren't free-moving enough to make a problem and overall you still get a solid and reasonably sturdy little vehicle package. I always thought this mold's car mode was made well, it's just that now it has a deco that brings that out instead of trying to hide it in an almost literal whitewash.

Now, this is where you might see a problem. There's no "Accessories" section preceding this because Windcharger doesn't have any accessories. And since Tailgate was part of the second stage of Generations Legends who had partner figures but no personal accessories, now that the partners have been eliminated it just has nothing. Besides leaving a 5mm port on the hood of the car with no purpose, it highlights how there is a tangibly reduced value. This mold was sold at the same price a year earlier and came with more. I'm grateful that we can now enjoy Legends toys being able to get alternate headsculpts, even sometimes added after the fact, a situation that even a year ago we might have believed impossible. In the case of getting these later modifications done, I can't help but wish a small rifle or something could be added too and offset the feeling of lost value for the money.

Windcharger is a figure I didn't expect to like. I purchased a full set of the first wave Legends for overall cost effectiveness, but I was really happily surprised with this. On its merits as a figure I like it more than Tailgate. I don't think it exceeds RTS Windcharger in being a good figure. This is nice, but I'm not planning on getting rid of my Scout versions. But, if I decided I wanted my Wipe-Out to not be an identical body type, I do have an alternative for Windcharger I feel happy with. Windcharger rates Good on the Figurereviews.com Non-Numeric scale, and while it might be nice if it could still have come with a little Micromaster or otherwise-inspired little buddy to fill out his pricetag a bit better, I'm kind of okay with the idea that I'm paying a tiny bit more just for a better deco.