Height: 9cm to top of head

Release Data: Released in the United States in December of 2014 at a retail price of US$9.99

Skrapnel was probably my overall favorite of Legends molds released in 2014, and that made me extra pleased to find out that it would be followed up by a Bombshell, giving me more modernized G1 Insecticons. Even more novel that the name was among the batch secured for Transformers once again after years of substitutes like Hardshell, ...or Insecticon...

Bombshell takes some stylistic departures versus Skrapnel. The rounded torso elements have been used as a starting point, leading to the boots also having a lot of rounded edges, and the arms being rendered cylindrical. The lower torso and thighs remain boxy, but Bombshell is more a practice of curves overall. It's an interesting notion whether this might lead to each Insecticon having a distinct visual style, provided that they get around to making Kickback in the near future. Thanks to reduced size in the insect legs and some well matched angled and shapes, Bombshell's robot mode reads more like an action figure and less like a robot made of bug. This can be good or bad depending on your preferences. It gives a solid feeling of an animation model, but probably doesn't represent the original toy design quite so well. This is a balance that I think Skrapnel may have struck better. Bombshell tends to try to achieve this by blending what is pretty distinctly a cartoon-based design but with toy coloring. In the cartoon Bombshell's robot mode was largely grey, for whatever reason, but the toy was characteristic Insecticon purple, black, and yellow, which this toy follows. For the detail oriented, Bombshell might cause a bit of frustration by having a noticeably different shade of purple from Skrapnel. This is darker and a bit richer, which looks really nice. But if you're set on your Insecticons all being uniformly colored this might not be a great outcome for you. I would have to hope after this that a hypothetical Kickback would be yet another distinct shade of purple so nobody is marked as odd-out. 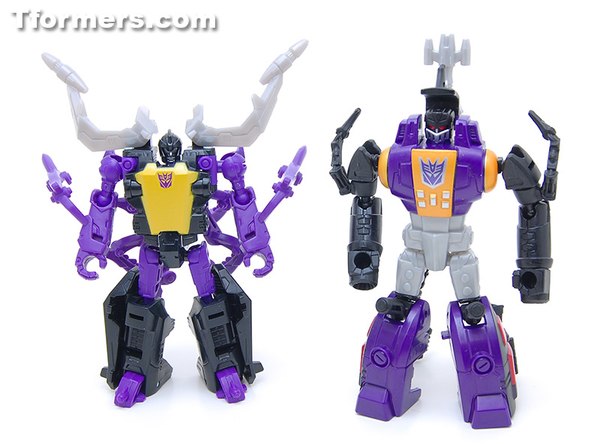 Bombshell's head is... well, Bombshell's head. Grill mouth, red eyes. The particular look of the head is another case of blending source materials so it doesn;t specifically match anything, but it floats through a few points of reference. Plus if we were dealing exclusively with toy notions here, the face would be solid silver as it was with Skrapnel. The arms are pretty generic. Each bicep has one insect leg on a movable ring because they need to change position during transformation. The forearms are cylinders with a little panel detailing and embedded fists. They terminate in what could be cannon barrels. This can be taken in substitute for lacking an accessory weapon. Plus with a name like Bombshell, heavy cannons seem like they're called for somewhere in the design. Besides small vents on the shoulders, the specific details of the torso are unremarkable, featuring just panel line sculpts and the five raised squares on the yellow section of the chest representing the original toy's cockpit hatch. There's a block on the back with some simple detailing. The legs are notable for adding big stompy boots for the shins. The knees have projections coming out in front with no discernible purpose. The back of either leg has an additional pair of insect legs. There are movable on hinges so they can keep out of the way of leg posing. 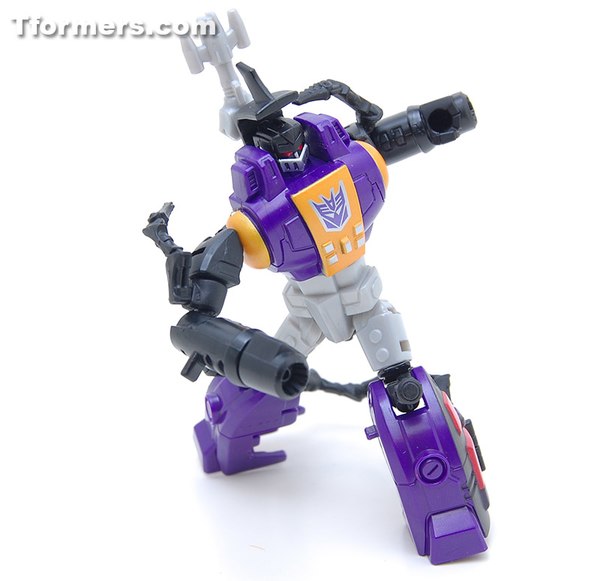 Poseability is okay. A transformation hinge at the shoulder gives the arms some unusual range of movement, and a ball joint elbows does well pulling double duty as hinge and swivel. There's a good, free-moving waist joint, but the hips are a little bit limited by the amount of detail sculpt on the thighs. It's a small matter though and won't affect the majority of poses you might want from the toy. The range on the knee joint depends how you arrange the bug legs, but the hinge is capable of fully doubling over on itself. There's also a dedicated swivel joint just above the knee. Unfortunately the neck is not articulated. This would have been left out on purpose since the "hood" and the shoulder vents would have hit each other with only a very small amount of movement; as designed there just isn't much of a point to having it. The horn-cannon behind the head can only point up or backwards. If you want a forward angle on it you have to fold the hood over the head to some degree. It can be given a useful angle without entirely covering the face, but it still looks a bit strange in doing.

The transformation is not complicated, but a step or two may be hard to make happen. It's largely intuitive of twisting the waist, folding the shins over - note that the tab which holds the legs together has to slide in, not push together, and of course be slid apart when transforming back to robot mode, and folding the arms away. But the arms are supposed to peg together, and the fit just isn't there on my Bombshell. With work I can get them to just barely connect, but it's resisted. It isn't completely necessary to get it to work, but being designed in I would like to take advantage of the extra stability.

Bombshell managed to compact down quite a lot smaller than Skrapnel. This is mainly thanks to the legs folding back on themselves instead of having a half bend of the knees and sticking out the back. Bombshell is condensed down more. But it's almost alarmingly tiny when you get it transformed. It's a solid little package though. Even if the arms wouldn't lock in place, the joints should be stiff enough to keep them in place, and everything else is held in or otherwise not prone to coming loose of their own accord. Once again, Bombshell is more rounded than the source material would have it seem, but that's more correct for a beetle than being a big square box. Though given the beetle is clearly a robot I don't think you can really claim anatomical necessity here. 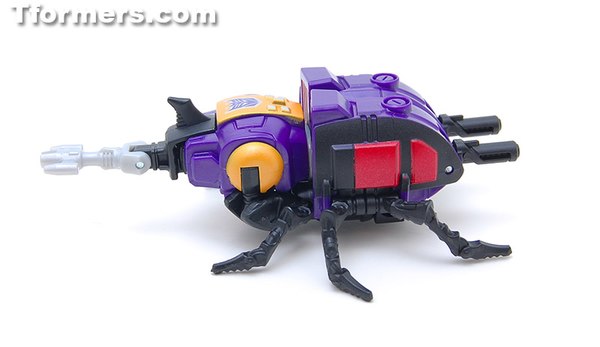 I was surprised to find that all the legs are independently jointed. The front legs of course have their own swivels, but the rear legs are separately hinged around a common axis on either side. This has its most use in robot mode so you can vary the placement of these legs so they have the least overall affect on posing and the appearance of the robot mode, but it can serve this mode just as well. Now, while the body is a solid unit, I would exercise some care where the legs are concerned. I have heard unfortunately of a leg snapping clean off with only a small amount of accidentally applied force. The plastic used on these legs is very rigid, and I can imagine it not having much if any give under strain, so a snap does seem more likely than a bend in a situation where it might be dropped and take the landing directly on a leg. I don't expect this to be a concern in normal use, posing or transforming, but be aware of it and be cautious.

A nice touch for functional detail, the robot arms which look like cannons are positioned so the same details can pass as rockets or jets to provide for a flying insect mode. It's some good double duty, and a welcome bit of consideration in the toy's design work. In the case that you can make the arms tab together so everything stays aligned and secured, you've got a great situation of a rocket powered bug. And even if the tabs won't play along it should still work almost as well on the tension of the joints. Finally, the beetle's horn/cannon is hinged. Notionally it should by default be pulled back a click to better represent the angle of a rhinoceros beetle's horn, but you can point it out straight and it'll also look fine. 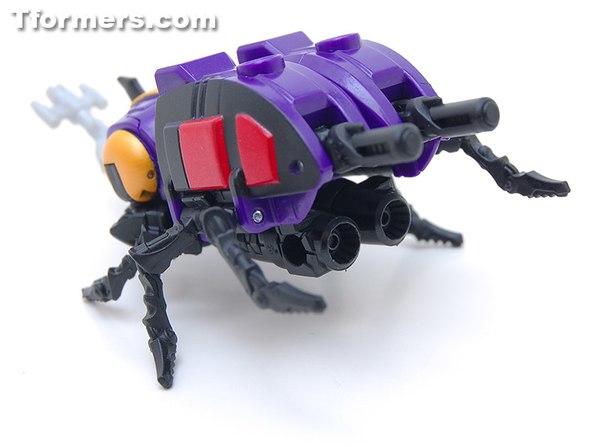 Between the posts sticking out where the robot's knees are and the cannon-like design of the forearms, Bombshell has attributes of an additional mode, though no acknowledgement is made of this in any way. The posts have trigger-like tabs sculpted on them seeming to reinforce there's a gun hidden somewhere in this design, but nothing to that end really comes together out of what's here. I would speculate that these might be leftovers - vestigial elements of an abandoned third mode to be used by a combiner. Until such time as it's officially explained what the extra mode is and how to get to it, I'm going to conclude there isn't one and these are just vague signs of something that never quite made it out of the planning stage.

Bombshell is a perfectly nice little figure, but somehow I just have trouble feeling anything in particular for it. Sure, there's nice bits of design, like the bug rockets or the individually articulated insect legs, but Bombshell doesn't do anything to really stand out. It almost feels like an obligation, like one Insecticon has already happened, and a second one had to be made so it was made to a fine design standard but no extra special effort was put in. Nothing was done to make it stand out. It's just kind of there.

In an odd way I think I'd be able to have a more definitive feeling on it if it did have some distinct flaw. Just something to latch on to and get a feel of the toy's personality off of. As it is, it's just unremarkable. I would objectively give it a Good on the Figurereviews Non-Numeric Rating Scale, but I don't think I would recommend it as just an individual purchase. It's certainly worth getting to join Skrapnel if you want updated Insecticons, but I think if that's your motivation you'd grab one without me telling you to. If you just want a Legends figure and the character it represents doesn't matter, there's figures I would easily put ahead of this. 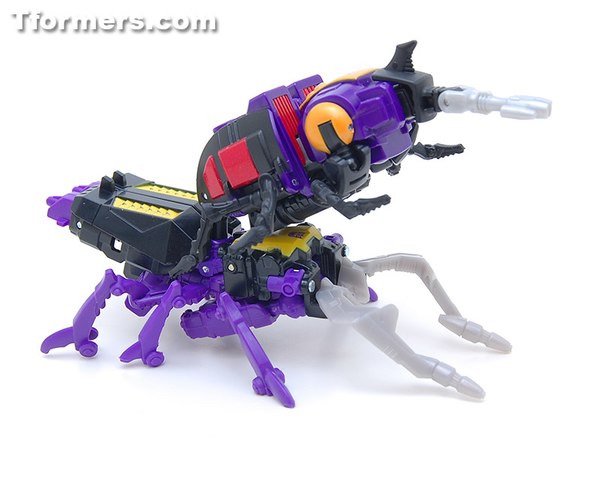