Release Data: Released in the United States in December of 2014 at a retail price of US$9.99.

A seeker mold is effectively a license to print money, at least in ideal circumstances. The original Classics seeker was used over 30 times, and even the Fall of Cybertron seeker hit the Core Three in pretty short order. There is no surprise at all that the Legends got pressed forward to be Thundercracker, and if Skywarp held any surprise it was just that it'll be coming as soon as it is. While I may have hit seeker fatigue from the Classics model, with this mold I am completely okay with numerous reuses.

A shared trait between this assortment's reused molds is decos that really step the figures up a notch from their original versions. Thundercracker is no different from Windcharger in this regard. Now, Thundercracker doesn't have any new parts added at all. But that's as it should be in this context. Thing is, Thundercracker doesn't have any new anything. The paint applications are arranged differently to account for the character's intended appearance, but there's roughly an equivalent amount of deco between Thundercracker and Starscream. The wings use the same stripe pattern, the cockpit canopy, forearms, and shin vents all have the same paint operations between these two versions. What differs is the chest being paint-dipped silver (the base plastic here is black), which includes most of the pelvis as well, and the helmet is painted black again over top of the silver coat. This is offset by the accessories being unpainted where they were the paint-dipped pieces for the Starscream use. 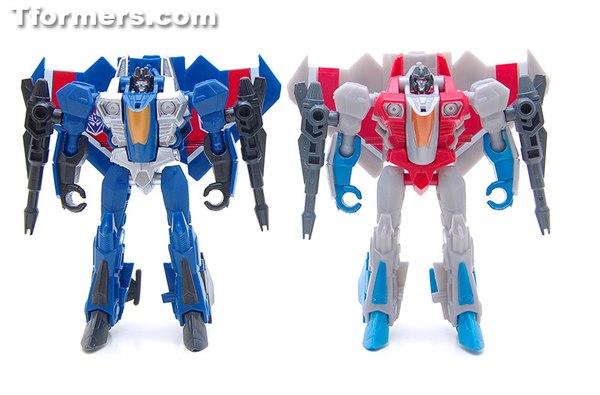 Ultimately the outcome of this is an equivalent deco that's just different enough to look as distinct as Thundercracker needs to, but not using any added paint. Plus if you account for the absence of a partner figure which would also need a couple ops worth of paint, Thundercracker actually has less. This is a very specific direction of complaint, because Thundercracker looks quite good with the deco it has. But it's another example of how the transition to Combiner Wars branding has resulted in the loss of some of the dollar value of these pre-existing figures.

But I really love Thundercracker's deco. The blue plastic is this perfect shade that has a visual quality that's hard to put in words. It's sort of soothing, but that's only the edge of what it does. Most of the plastic has a matte finish so it's not glaring light back at you if you have it at a wrong angle, it's just kind of mellow about the whole thing. Like I said, the actual effect I get looking at this is hard to describe, but it's really pleasant. And apart from that, the blue dresses up the toy in a really attractive way. The paint work on the head is surprisingly well done. And given all the details involved are smaller than the corresponding parts of Windcharger, it's even more impressive.

The change of plastics has had an overall positive effect on the workings of the figure as well. The joints all have a smooth stiffness and consistent feel that Starscream lacked, making the toy feel really nice to mess with. The mold does show its relative age compared to what it ships with in its lack of anything to act as a thigh swivel, but it's not a major issue to raise with it even if I feel like the knees could have been ball joints without making a problem for the greater whole of the engineering. It's a great state for a recolor to be in since it's usually a rare case that one will feel so much more "right" than its original iteration. 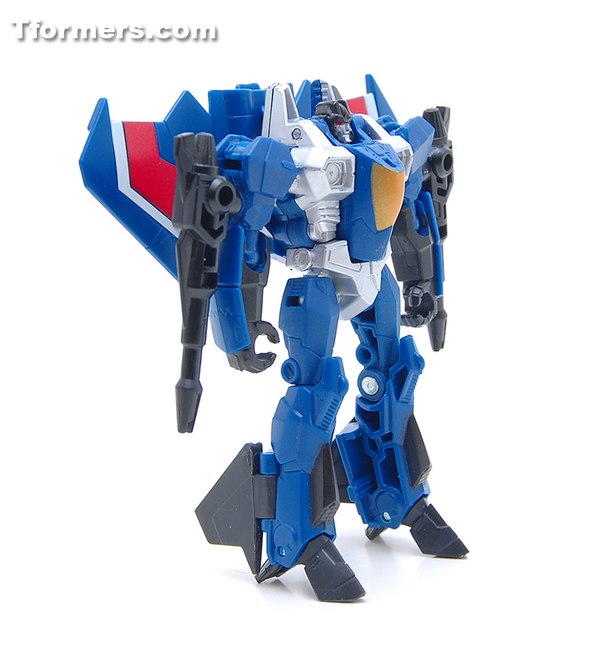 Thundercracker shines in this too. Starscream had stress marks as soon as I started trying to transform it, but Thundercracker shifts between forms easily and smoothly without a problem of parts fit or anything bending or stretching in ways the material doesn't want to accommodate. It has the same simple transformation quality of a Cyberjet that drew me to the mold to begin with, but none of the concern of something breaking.

I'll admit I have a bias toward small jet Transformers like this because of G2's Cyberjets. I'm always gonna favor things that remind me of them, and this has that pretty strongly. So like we already talked about, this puts an attractive new deco on something I was already rather happy with. For a jet of this size it has a surprisingly small amount of intrusive undercarriage which gives it an advantage over others in its general size range. Throw this really excellent coloring on it and you have a hard to dispute winner of an aircraft Transformer here. The deco in this mode is a lot more 1:1 with Starscream, as the distinct changes were focused on robot mode elements. But it's more cohesive looking within that layout. The primarily blue with silver highlights and of course the red and white wing stripes with just some hints of black here and there reads better than the light grey with red and blue Starscream had happening. Ultimately this is gonna reflect personal preference, but man do I preference the hell out of this. 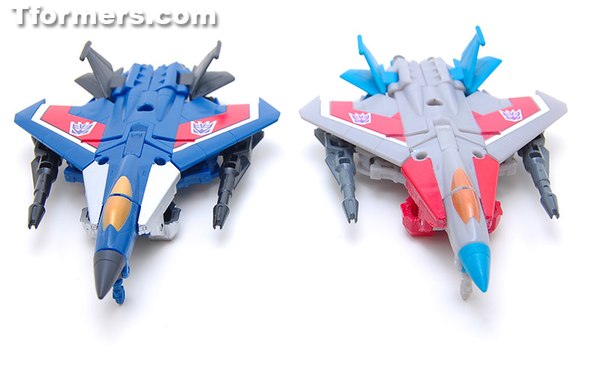 Thundercracker has some material changes that make themselves evident in this mode. Starscream's tail planes and stabilizers and nosecone were a rather rigid plastic originally, but Thundercracker uses softer, flexible plastics for all of those parts. They change nothing about how the toy functions, but the tail fins are less likely to break if accidentally stressed too much. The nose ...I think is just on that parts tree, because the business end of the nosecone still feels hard and unyielding, though the hinge is more bendy and might absorb some impact force. But if the change was even partly to address making it more safe against being flown at an eye, I doubt this will have really helped much. But it hasn't harmed the toy in any way, so I'd say all is well.

Thundercracker keeps the arm blasters from Starscream. In his case, they're left as bare black plastic since that works, and their paint was redirected elsewhere. It does put Thundercracker one step ahead of Windcharger in at least coming with something extra. And while it's a little awkward since the thick part of the post is so short and close to the body of the gun, you can fit it to the 5mm port on the jet if you want to... I guess have a rear-facing turret on your fighter aircraft? If you point it forward it's basically shooting right in to the cockpit, which may not be the worst thing for a Transformer, it probably still is kind of unpleasant to shoot your cockpit off.

Between the reused older molds in the first assortment of Legends this year, Thundercracker is the easy winner overall. He falls more or less even in deco and how well that deco is carried out when compared to Windcharger, not to mention the degree by which it serves to improve the original toy, but Thundercracker also has extra pieces thanks to being a recolor of a first stage Generations Legends figure. The loss of a partner figure doesn't seem to bad in this case, especially if it would have just been another weird Waspinator redeco. Of course had the budget been there to keep the partners, Thundercracker would have been ideal to reuse Reflector on. 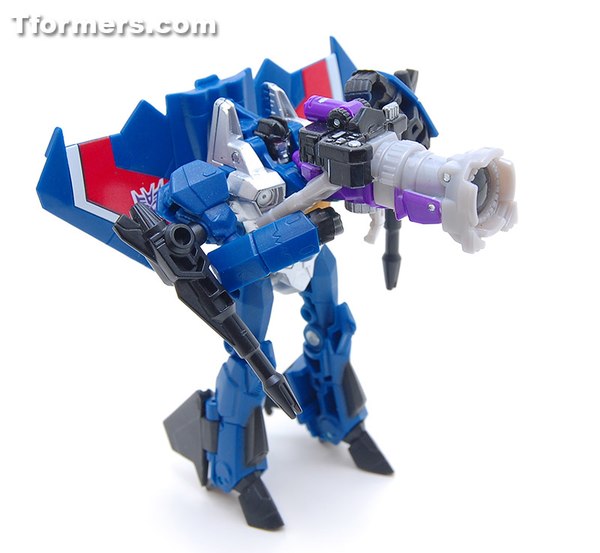 Also yes, this isn't the first recolor of Starscream, and while I don't have Acid Storm all indications from what I've been told are that Thundercracker blows that out of the water. This is really the best of this mold to date, and it pulls a Very Good on the Figurereviews.com Non-Numeric Rating Scale. I can only hope that the Skywarp due later this year will be even close to this good!