Release Data: Released in the United States in February of 2015 at a retail price of US$9.99

Huffer shared some space with Windcharger as a recolor nobody really wanted. The mold is so much Optimus Prime that to try to give it a different head and pass it as a character who is expected to look much different seemed to be asking the impossible. Plus the design of the figure had never been all that well regarded. But I learned that we were wrong about Windcharger, and I think we were wrong here too. 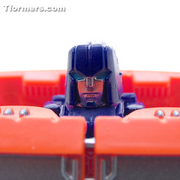 Huffer has a very Huffer head sculpt. Of course, that's a generic design, and despite Megatron's occasional nickname, you can't get much more bucket-headed than this. But the eye shape, the facial proportions, everything's tiny but the shapes are right and they make a great likeness to Huffer. The head swivels, and to one degree or another that is probably owed a lot in our being able to get the new head on here to actually make this Huffer. The head still has a socket on back for weapon storage, a subject I'll go in to some more detail on farther down.

The mold has always had a strange chest design with the windows being able to hinge open and show an Autobot emblem on a plate on the inner chest. But this forces the shoulders out of place unnaturally and worse, they don't lock at either end of the their range of motion. This has previously been a problem where the fitting isn't very tight so any movement of the arms pulls the window with it, even including the Nemesis Prime that preceded this use of the mold. Huffer manages to keep these panels in place better and in doing greatly improve the use of the robot mode. You can thank a painted torso piece for this, as far as I can tell. A structural chunk in the inner body very much looks to be paint dipped blue, though I can't identify what the base color was. The extra thickness seems to be holding the hinges a little more snugly so they can't move so much without determined effort to do so. The parts fit and tolerances on this in general seem to be tighter than my Nemesis Prime. Often this is good, sometimes it's not. For one, the robot head is very difficult to pull put out of the body when transforming because the hinge is extremely tight. The mid-body transformation joint is similar. But the regular joints fare much better, finding that happy point in the middle of tension and smoothness. 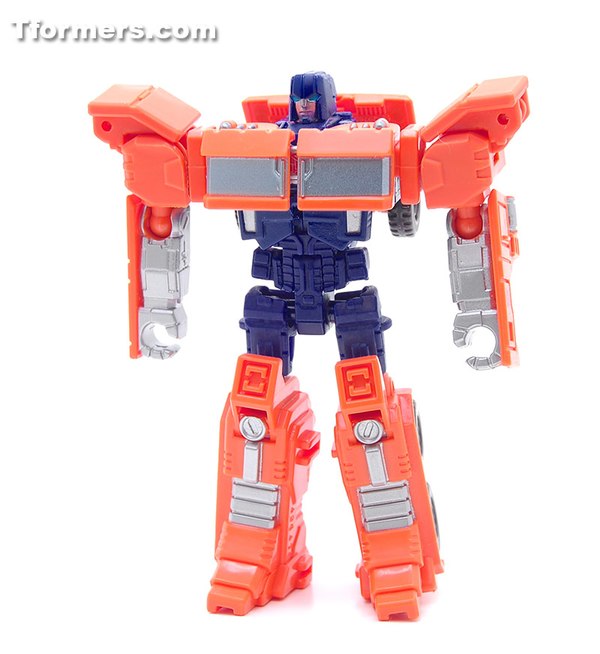 Deco-wise, I like the breakdown of colors on Huffer. The orange isn't quite as far as being safety, but it's a very rich orange contrasted by a great looking dark blue. The placement of the colors may not be 100% accurate Huffer, but the values of the colors is right on the mark. That more than almost anything is what will make you see Huffer when you look at this. Part of me wishes he had the cab-shell hood in some way since it's a distinguishing visual element, but when it comes right down to it, it's not something you're gonna find yourself missing very much. Huffer is accented in silver which a great alternate the the color extremes. I especially like the way specific details have been picked out on the legs to make sure to emphasize a certain shape within the outline of the boots.

Again, a couple of the hinges involved in transformation are pretty stiff, but they'll get where they're going. Otherwise it's a simple enough process that you may be familiar with twice over already depending how much you've kept on this mold during its lifespan.

What's impressive about the deco is how you take a blue and orange robot and make an almost completely orange truck from it. Neither of the prior uses had the color arrangement to really make that capability evident, and it's a cool combination of design behavior and deco planning to take advantage of it. The truck benefits from enough silver paint apps to give a finished look to the front end, with the grille and lights painted in well, and even the foglights on the roof get the paint treatment. Really, apart from silver hubcaps I don't think there's very much you could say is lacking in the deco for the truck mode.

Now, I'll grant you, there's nothing actually in this mode to make Huffer distinct from an orange Optimus Prime or other lookalike since the profile is distinctly Optimus rather than the diminutive Yard Tractor-style truck the original was. There's not much you can do about that other than take it for what it is and accept its gift of nearly unbroken orange in to your life and shelf space. This mold in my experience hasn't suffered vehicle mode stability problems, and Huffer is just as solid in truck mode as you could want.

Huffer comes with the rifle that Optimus had, but of course lacks the Roller-based partner figure. Which raises an interesting curiosity. See, Cliffjumper came with this rifle and the Roller-mold figure while Nemesis Prime had the helicopter partner figure (Spinister in that case) but not the rifle. And at this point I'm more than a little confused as to what is actually linked to what in these molds. It's been clear for a while the partners weren't permanently gang-molded to any of the figures, especially since Takara used them alone as campaign items. But it seemed like the associated secondary weapons maybe ought to be attached, and yet here we are.

So anyway, I promised extra detail about the weapon storage. The rifle is meant to peg in the socket behind the head for vehicle mode. On the Optimus version this works fine. Don't do this with Huffer. There are grooves in the socket - they're carried over from the front of the helmet and are an element of the classic character design. But when they get to the socket they're thin spots that are all too happy to stretch when you try to peg the rifle in. One attempt left severe stress lines, and I'm afraid any more will crack it outright. It seems like this issue only exists because of what are essentially scoring lines added to this part, thus creating a failure point in the piece. A uniform thickness socket wall would probably have never shown any sign of stress at all. So don't use the gun storage. Don't give poor Huffer a splitting headache, okay? 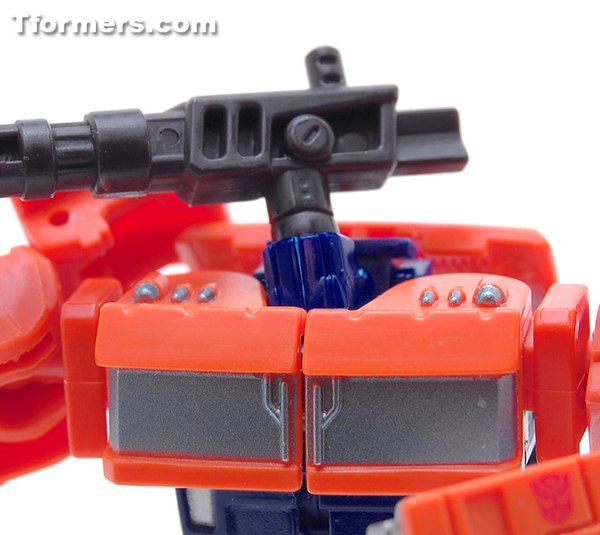 I was talking with my friend HeyMickey about Huffer recently, and he summed up pretty well why this ultimately works. See, for the most part the photos of the toy up until it came out showed the main color as being a lot more yellow, which made it look like a weird Optimus Prime recolor with the wrong head. But the actual plastic colors hit the notes of Huffer really well and make it work as the character. True, it might not conform to the classic image of the character, but it sells me. More importantly it accomplishes something that I think might be a little too rare now: Reimagining the look of Huffer while keeping to the basic essentials to convey that character.

For the most part the toy benefits out of this recolor, being more solid feeling than earlier iterations, even with a couple spots that have become just a little too solid. All in all you have a net gain in functionality with Huffer. I think Huffer is Good in terms of the Figurereviews.com Non-Numeric Rating System, and is a very good use of this base mold for what it accomplishes in changing its identity. There's a few small issues, but nothing that can't really be worked around and avoided. Ultimately this may be too much of a departure for some to accept as a Classics-intended Huffer, and I can understand that. But I'd still ask that you give it a chance and at least check it out in person before deciding for sure. The reality may surprise you.