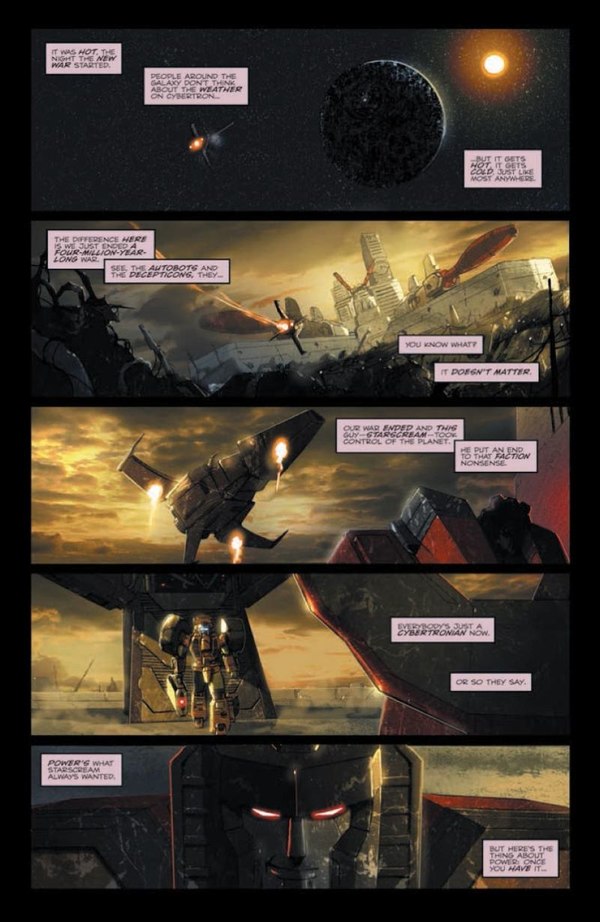 Swindle monologues to himself on the state of things on Cybertron as he watches Motormaster and the rest of his Stunticons attempt to beat Optimus Prime to death along with Windblade, but his fun is short-lived as Chromia and Ironhide arrive. New developments have arisen that led Windblade to come looking for Optimus so he could be brought up to speed - and included in the fledgling resistance against Starscream. Meanwhile, Scoop has returned to Cybertron with the Enigma of Combination he escaped from Earth with, a prize Starscream gladly receives. Understanding all too well what it represents, Starscream wastes little time in planning for the glory he expects in his immediate future, and he begins moving his pieces in to place...

I'm of two minds on this. Initially I get the distinct feeling that this "Opening Salvo" really wanted to be "Dark Cybertron: Chapter 1", a standalone prologue laying in the final elements to initiate the meat of the story. But for whatever reasons prevailed, it's sitting among the regular run of the series. I'd imagine it's a consequence of having a smaller event overall that it doesn't justify a special one-shot, and that's where I have conflicting thoughts. Dark Cybertron suffered more than a little in getting started perhaps because it was plotted out to be such a lengthy event, and it would most likely have benefitted from being pared down and condensed. While one might go in thinking that with half the length planned this would learn to keep things tight and to the point... it kinda doesn't. There's a feeling of some time wasted and inconsistent pacing happening. The proper meeting of Optimus and Windblade's anti-Starscream group seems to drag on far more than it should have to no gain, only randomly dropping plot nuggets along the way to make the time feel justified. In fact, there's a whole thing near the end about the state Windblade's homeworld is in that's delivered by a character without any connection to that place which could have been put in during this conversation and revealed by Windblade and Chromia - the characters that are actually affected by it in the long run. Instead that information is barely even acknowledged at all in just repeating that Caminus has resource shortages and offering no more. I could also talk about how pointlessly random it is to have Optimus out walking the ghetto again knowing he'd attract violence after his experience during Punishment. It makes no sense unless you take it as wanting to start the issue on some kind of action in progress without regard for if it makes internal sense. And if the purpose is to establish the presence of the Stunticons in particular, there could be any number of less dumb seeming ways to do that. It's also unclear how much time is meant to have passed from Punishment until now. Civilization on Cybertron isn't very expansive still, and if it's been more than a day or so, it seems weird Ironhide would only be catching up with Optimus now. Especially with the string of murders during that period I would expect Ironhide to have been aware of and sought out Optimus as soon as possible. Now, I'm not going to blast everything in this, because there were some good points. Starscream is enjoying far too much twisting Scoop's faith against him, and while being a designated target like that might not be the ideal fate for the character, it's basically the only consistent characterization he's had since becoming at all prominent just before Dark Cybertron. More interestingly is putting in some groundwork for Wheeljack to have conflicted loyalty. There's potential there for some good payoff a little farther in which hopefully will be handled well and not just get brushed aside once the immediate function of that step is over with. The writer credit on this issue is exclusively John Barber, but I can't help but wonder if Mairghread Scott didn't at least influence the writing a little. Without realizing it, I was hearing the voice of Prime Starscream in my head consistently in this issue, where typically it's a lot less distinct - often a mix of Starscream voices as different personality types surface in the course of a story. Starscream felt much more focused this time, and I hope that continues across the event. It would make sense for at least a while, as his pieces have fallen in place and he would see himself right now in an unbeatable place of strength that he's only going to make stronger. That ought to carry on through at least most of the next five issues before his world crushes in on him.

I'm afraid the visual side doesn't hold up, though. There are better spots here and there, which seem to focus around Starscream more than anything, but things are not great overall. Were it not for the nametags on the cast page I'd have thought Scoop was Nightbeat from the headshot - and again in the actual issue art when you can't see his full body. Other character model inconsistencies happened all over the place, and it was particularly bad between Motormaster and Windblade. Windblade's proportions seemed to constantly elude Ramondelli, as she never looked right, and never didn't look right the same way twice. A particular thing stood out to me where Metroplex's main guns looked remarkably like Galvatron cannons. Swindle probably does the best to come out looking good throughout his appearances in this issue, and generally manages to convey his personality reliably in expression and body language. And a couple bits of background actually look nice, including the space bridge terminal itself. But sequential action is hard to read, and while it may dress up "special effects" like glowing artifacts and space bridges, the filter use is grossly heavy in places. In the page with Scoop landing on Cybertron, there's what otherwise would be a nice looking cloudy background, except that it very obviously doesn't mesh with the foreground. Be it sampled or artificially generated, the clouds don't match the style of everything around them and so they just become an obvious point of focus for the wrong reason.

On covers, Casey Coller and Joana Lafuente deliver an excellent Menasor-centric piece with Optimus in the foreground. The combination of Casey's fantastic clean linework and Joana's great talent in coloring makes this image come together and pop brilliantly. The subscription cover is half of the Combiner Wars promo image revealed at SDCC 2014, focused on Superion. But the overwhelming winner is the incentive cover by Sara Pitre-Durocher, a close up on Menasor, carrying Swindle in his hand. The expressiveness of the characters is really great, and Swindle is the most Swindle of anywhere in the book in this one piece of art. It's all topped by the coloring, another expression of digital painting that has such a beautiful grasp of lighting and shadow to make Menasor look almost perfectly naturally backlit. Once again we must lament that most of us will never see a copy in print of this cover, but Casey and Joana's main cover is a more than adequate substitute.

There are also special variant covers for this and Windblade #1. On the The Transformers side, Superion is leaning over a blank space where a retailer's building can be drawn in. It seems there were six of these obtained. Having had a chance to look them all over, the cover featuring St. Mark's Comics really caught my eye the best. Unfortunately as unlikely as the general audience is to ever see a typical retailer incentive in print, these limited to specific shops will probably be about impossible to get a look at, much less obtain.