The fate of Piggy Island hangs in the balance as the final push to stop the Eggspark's influence on the Angry Birds' world begins! It all hinges on the Deceptihogs actually following instructions. ...oh dear. "Hard Boiled" is written by John Barber, with art by Marcelo Ferreira and colors by Nikos Koutsis, with guest illustration by Livio Ramondelli. 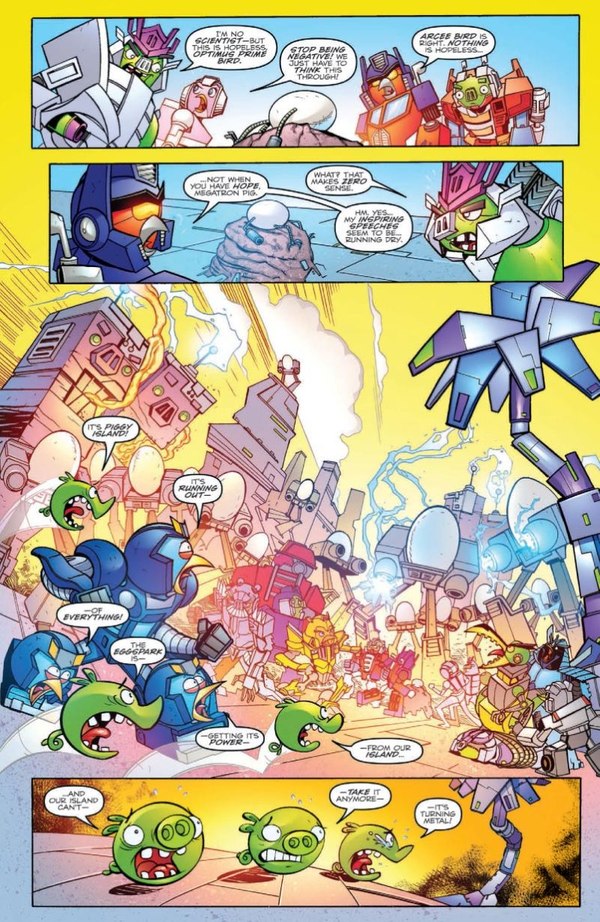 1. This is a great, clean, well-executed, super-crowded crowd scene.
2. Optimus Prime Bird converts Allspark energy directly into inspirational speeches and that is wonderful.

Two options remain: let the Eggspark kill Piggy Island, or separate the Eggspark from the island to put everything back to normal. Naturally, the Autobirds aren't going to settle for the first option. But keeping the Deceptihogs on-target proves difficult, with the Minions, Galvatron Pig, and of course Starscream Pig all with their own plans...

The saga of the Eggspark comes to a close, and it's what you probably expected from when you picked up issue #1. Which, honestly, I don't count as a negative in a light comic like this. The level of quality of the book has been really consistent, though I think my favorite issue in terms of comedy content has been #3. Which is not to say this issue is lacking in humor. There's some good bits poking fun at Bumblebee Bird's movie-derived vocal processor problems at the end, and the running gag about Optimus Prime Bird's inspirational speeches petering out is done pretty well too. Toss in a Furman reference, again from Galvatron Pig, and some other non-Transformers references as well, and you've got an entertaining book.

With all the characters in one place - and that place being fairly built up compared to the rest of Piggy Island - Ferreira and Koutsis end up doing some very intricate panels in this issue, moreso than we've seen up to this point. Some of them are a little much to take in at one time but not difficult to read; they're busy but never muddy. Everything in the book remains clean, on-model, bright, and lively. It makes our brief visit with Livio Ramondelli's G1-style Transformers a bit less of a treat than it seemed in the first issue. I kind of don't want to leave Angry Birds World if the dimly-lit drabness of the Ark is our alternative. That said, I'd still like to see a G1 Redux book done in the cartoon style with that cast.

Covers this month include one by the regular team showing Starscream Pig clutching the Eggspark, and one by another master of clean and on-model, Guido Guidi. It's a nice cover, more basic for the ABTF concept than specific to the issue. But the signature - "Angry Guido 2014" - is the perfect finishing touch.

In the end I find myself repeating myself about this book, but it's pretty straightforward and consistent in what it does and how. It's not going to change your life. (Or if it does, that raises a lot of interesting questions about your life.) It's an all-ages Transformers/Angry Birds crossover, which you could already tell. But more importantly it's not a licensed book for kids that everyone involved did on autopilot. Everyone involved clearly cared about making a fun comic. It has a bit of the Rocky and Bullwinkle spirit of wanting to have fun things for adults as well. And especially adult Transformers fans. Practically everything about the book is well done, and hopefully it'll be enjoyed by its target audience of small Angry Birds Transformers fans.

This series will be some kid's first Transformers comic, and it should do well in that role.