Looking back on the past eighteen years, we've seen more Optimus Prime toys than we ever believed possible. Who'd have thought that you could get so many unique robot modes out of a semi truck? For that matter, who'd have believed we'd get a Prime who transforms on his own?

Sparkplug looks to be a Lamborghini Countach, bright yellow with purple windows. Although he measures only 5.5 cm(2.2") long, he's nicely detailed with moulded headlights and rearlights and a Mini-Con symbol on his roof. His Powerlinx socket is located on his underside. 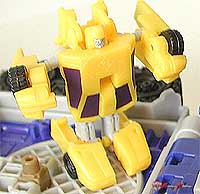 For such a tiny toy, Sparkplug has a surprisingly complex transformation. The front of the car swings forwards, the back folds down, the sides at the swing out to become arms, and the head flips up.

Sparkplug stands 5 cm(2") tall in robot mode. Still mostly yellow, with silver limbs and a metallic silver face. Judging from the shape of his head, it would appear that he was initially supposed to be named Bumblebee. He has swivelling shoulders and feet and ball-jointed elbows. Definitely one of the cuter, kid-friendly Mini-Cons.

Sparkplug is a nifty little fellow, albeit kind of a whiner according to Dreamwave Armada #2.

A big, futuristic-looking semi truck that measures about 36 cm (14") long. By themselves, the cab and the trailer measure 19.5 cm(7.7") long and 10 cm(4") wide and 26 cm(10") long and 15 cm(6") wide respectively. The cab is blue and red with a gray front grille, metallic silver bumper, wheels, spoilers, and roof lights, clear exhaust stacks and windshield, and gold detailing. Three dead Powerlinx connectors are located on the blue section of the cab, one of which serves to connect it to the trailer. Unfortunately, since it's not a very big post, the trailer often comes loose from the cab during play. The black tires all have "MONSTER PRIME CONVOY" sculpted on them, which may refer to Prime's Japanese name. On the roof of the cab is a gold button with an Autobot symbol painted on it. Don't be alarmed if nothing happens when you press it; that feature won't come into play until later. Inside the cab, you can see a circuit board which activates the auto-transformation of the trailer. And on the back is a battery case which opens by way of a Phillips screwdriver. Three A-76 button cell batteries have been included, thankfully.

The cab rolls great on most surfaces, holds together well, and, while it certainly won't win any beauty contests, looks powerful and rugged. My only complaint is that the combined robot's fists stick out at the rear of the cab. Then again, this probably means Prime doesn't have to worry about getting rear-ended.

The trailer is mainly blue and silver with black treads, metallic silver highlights, and great big raised Autobot symbols. Four dead connectors are located on the trailer's roof, two of them on hinged flaps. Protruding out from the front is a metallic red platform with a dark blue-gray gun emplacement. On the underside are four small wheels, an On-Off switch, and a screw-open battery case for four AA batteries that are *not* included. The trailer holds together fairly well by way of a series of pegs and slots. Due to the puniness of its wheels, it doesn't roll too well on carpet. I really would've preferred a set of large wheels on this thing instead of those silly-looking treads.

First up, make sure you've uncoupled all the pegs holding the trailer together and set the switch to 'On.' Now, holding the cab so that its grille is facing the front of the trailer, begin converting it to robot mode (it transforms almost the exact same as G2 Laser Optimus Prime/RID Scourge). If you're doing it right, the trailer will slowly and noisily unfold into its base mode, finishing off with a mechanical sound. Occasionally it misbehaves, going all the way to combiner mode instead of stopping at base mode, although this might have to do more with me holding the cab in front of it for too long or something. It's quite possible that other fans will not have such problems. Or maybe they'll have worse.

At just under 18 cm(7") tall, Prime is slightly shorter than Scourge but huskier, with massive forearms and fists. He retains the same colour scheme as his cab mode, with a mostly red and silver upper body and blue and silver lower body. His head is blue with a metallic silver mouthplate, gold eyes, and a gold crest. Pressing the button on top of his head causes his mouthplate to move. "Takara, stop using cheap animation already!" Flipping open the grille on his chest reveals the Matrix, bright gold with a metallic silver core. Prime's exhaust stacks detach from his forearms and snap together to become a small double-barrelled laser gun. Far more impressive, however, is his other weapon, a MASSIVE dark blue-gray, silver, and transparent cannon that is possibly the biggest boomstick ever to come with a Prime toy. It has two dead Powerlinx connectors, a socket for his smaller gun, and a swing-out shaft for attaching it to the Mini-Con base. Plus it looks like it could blow off Megatron's turret with a single shot.

Now for the downsides. First off, the chest plate doesn't snap into anything, so it flips up all too easily, revealing the combiner mode head. It also pops off way too easily, usually during transformation. And although Prime has joints at the head, shoulders, elbows, hips, and knees, he's really not all that poseable, largely in part because of his combiner feature. His elbows only bend; they don't swivel out to the sides. He can't spread his legs any more than a centimetre apart without separating his hips. And whereas Megatron can only do sidekicks, Prime can only do front kicks. He may have killer looks, but he's got less than killer play value.

The Mini-Con base is a neat, fun playset. Still, I wish it had a little more firepower to it. Even with Prime's weapons attached to it, I reckon it'd be flattened by Scourge's base.

Hold Prime in front of the base tower and begin transforming him (it's easy to figure out). Right about when you separate his legs/combiner arms, the base will come to life and rise up, forming the combiner hips and legs and finishing again with the same mechanical sound. Make sure to flip up the viewscreen if you haven't already. Now snap on the combiner's upper body. 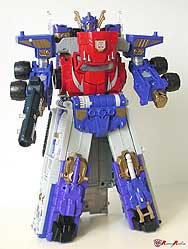 Standing 30 cm(11.8") tall, Armada Prime is comparable in size to Omega Prime and God Ginrai. Mainly blue and silver with a red chest and gold and metallic silver detailing. From the front, Prime looks great, very imposing, very badass, but from the sides or the rear, he looks like a building. Mini-Cons can be attached to the dead connectors on his shoulder pads and right leg, to the live one on his left leg that activates the twin laser cannon, and the live one on his back that activates his machine gun sound (gotta use either Sparkplug or another low-slung Mini-Con). The launcher on his left knee can also deploy, but it looks silly by itself. I really wish Prime had a matching pair.

Prime's head is blue with red for his eyes and gold for his mouthplate, crest, and stacks. As more than one fan has smarmily noted, the face makes Prime look like the offspring of Depth Charge and Jetstorm. Pressing the Autobot symbol button on his chest activates the laser-blasting sound. Placing either of his firearms in his right fist and then pressing the small button on his shoulder pad causes it to light up red. The Star Saber also fits into his fist, but the light isn't strong enough to light up the entire sword, just the handle.

Below the waist, Prime's a complete statue. And above the waist . . . well, I wish I could say that he makes up for it. He's got joints at the head, shoulders (two joints), and elbows. But for some strange reason, his shoulders have been designed so that they can only swing to the rear. Even worse, his elbows only bend to a 70 degree angle or so, meaning that he can't shoot anything that's not on the ground in front of him.

On a more positive note, the robot holds together great. I can pick it up simply with one finger hooked underneath the head and not have to worry about the lower section falling off.

When you're ready to transform Prime back into semi truck mode, simply pop off the upper body and begin changing it back into cab mode. The lower body will unfold into base mode and then fold back up into trailer mode. 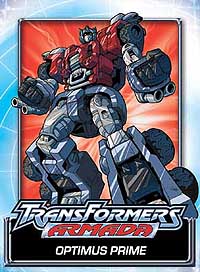 Susp Sez: Lack of poseability really hurts this toy. I can accept the combined mode not having any joints below the waist, but the arms are a major disappointment. Similarly, the cab robot is pretty sweet, but would've been even better with a couple more arm joints. OTOH, Armada Prime definitely deserves points for effort and innovation. The auto-transformation works fairly well and is quite fun to watch. My hat goes off to the designers for pulling off this feat. Ultimately, I would say Prime is worth the money, but be prepared for his shortcomings. 7.5/10

"Freedom is the right of all sentient beings." - Optimus Prime
Thanks to Remy for providing the pictures. See the full Armada Optimus Prime gallery HERE