With my thanks to Hasbro for sending this along, today I'm gonna talk about Combiner Wars Quickslinger. Quickslinger is a redeco of Firefly from wave 1, based on the Slingshot character but renamed for trademark reasons. Starting on May 22nd, this figure along with Brake-Neck will be available exclusively through major online retail outlets, so be sure to go check out your favorite to get hold of these. 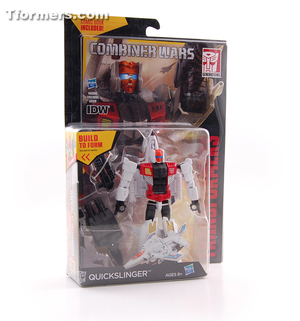 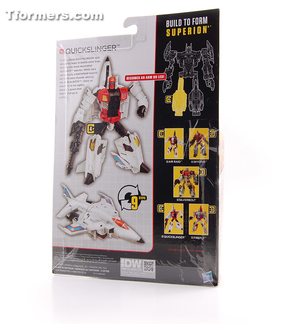 Quickslinger has always stood out from the rest of the Aerialbots - a fact he'll happily tell you all about. As the only original Aerialbot with VTOL capabilities, he can execute certain maneuvers and missions that his teammates simply cannot accomplish. He has incorporated his unique abilities in to a signature style of aerial combat, using his engines to move suddenly and sporadically in combat, which makes him extremely difficult for his enemies to target. His twin mortar cannons deliver remarkable damage, while his neutron blaster fires with pinpoint accuracy over great distances. With fellow Aerialbots forms Superion.

The endless stream of hero stories and self-promotion from Quickslinger has turned off many of his Autobot teammates, and his terrible taste in music pretty much took care of the rest. The bragging likely covers actual insecurity and loneliness - being a key part of the Aerialbots is critical to his sense of self-worth. Forms either an arm or leg of Superion, the combined form of the Aerialbots.

Since this is a redeco, we can just quickly go over the workings of the robot mode. There are some minor variances compared to Firefly related to the change of plastics. Most notably the white plastic has a slightly looser feel. You'll see this in the shoulders to a degree, but the shoulder stalk itself helps counter it. 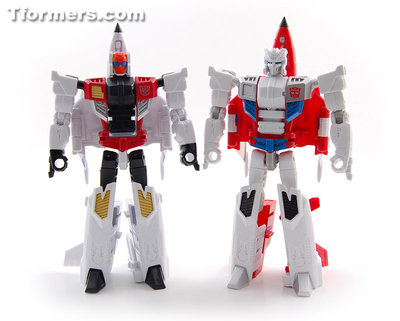 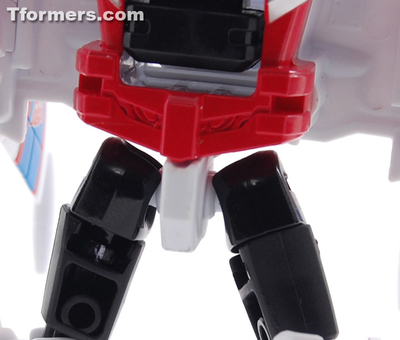 Quickslinger is capable of standing up just fine, but you will notice that the hips lack a certain expected tension, especially compared to the thigh swivels just below. There's another place where the white plastic makes a distinct problem, but I'll get to that a bit later. 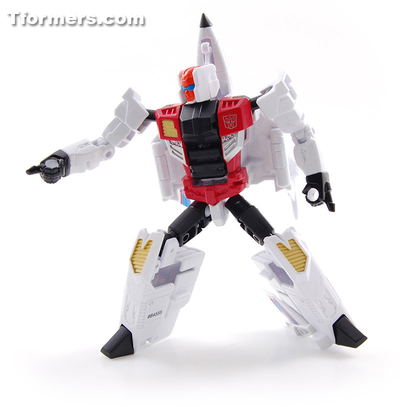 The body is almost entirely white plastic. Only a couple of parts are cast in black, and those mainly represent the parts that are a different material. The chest is fully painted, so extensively that the post going through the shoulder joint is even painted. This did cause me a bit of paint lock on the shoulders at first, but it's gotten better and smoothed out after some use. 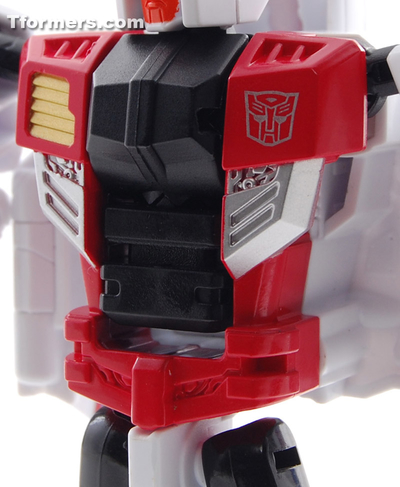 The fists are conspicuous in their paint, looking dipped wrist-deep, but leaving the fist hole blank white. 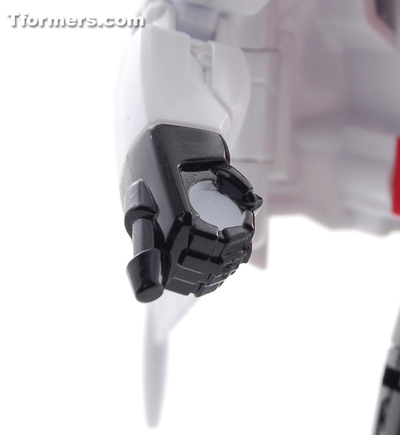 New to Quickslinger is the head. First seen on promo shots of TakaraTomy's Unite Warriors set, here it's painted with a blue visor for better contrast. The sculpt is nice, and certainly captures the peculiarities of the original design. The smooth face and relatively small nose seem to make it look younger than it ought to though. 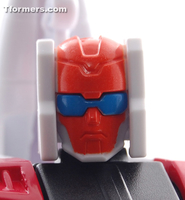 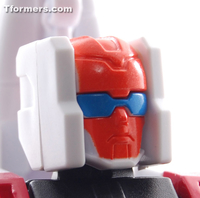 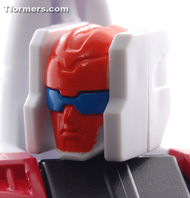 The elbow ratchets work well, so Quickslinger can easily hold both included weapons. The other joints in the arm may not do as well with the combiner part weapon in some spots, however. 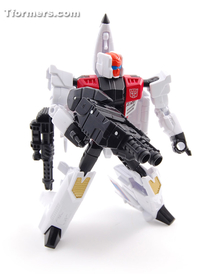 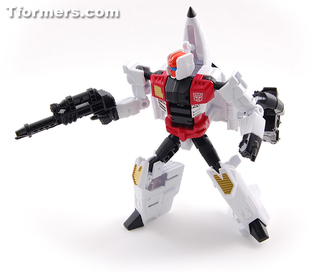 Transforming to vehicle mode is just the same as Firefly. Meaning some really loud clicks that will convince you you're breaking something. But you aren't. I am worried about getting the legs tabbed to the waist. The receiving slots are painted, and it's a tight friction connection. Paint wear seems unavoidable.

This is one white jet. There are wing deco patterns, and an orange cockpit, but most of the non-white are robot parts notionally hidden in this mode. This is technically accurate to the look of the original, but it certainly leaves a lot to be desired in terms of visual interest. 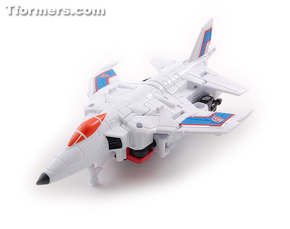 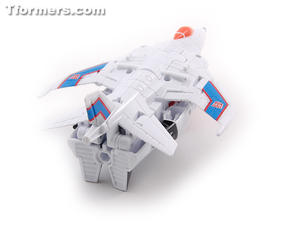 I do like one bit of deco particularly, as the black intakes give some really nice contrast that the jet really needs. 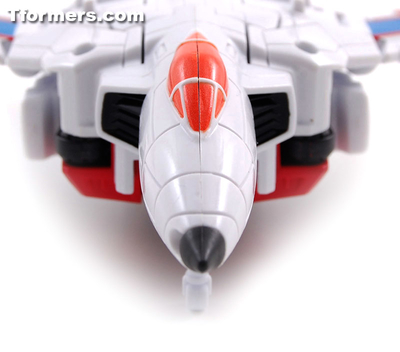 The jet favors the Harrier G1 Slingshot was designed after pretty heavily - a fact that wasn't overlooked when the mold was Firefly. In that respect it probably makes a better Slingshot than it did a Fireflight. I will give Firefly the edge in visual appeal, though. 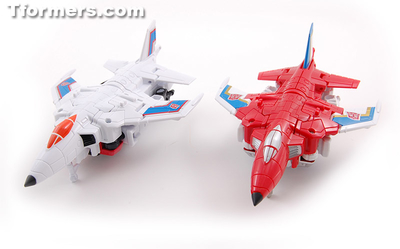 Oh, right, I was gonna explain another white plastic problem. The one landing gear is hinged, right? So what happens if that hinge has no tension? Yeah, it just falls out. There's notches to hold it open, but mine at least absolutely will not stay retracted in jet mode. Half the time in robot mode it falls down too. I just imagine Quickslinger with a constant headache as his front wheel keeps hitting him in the head at random. 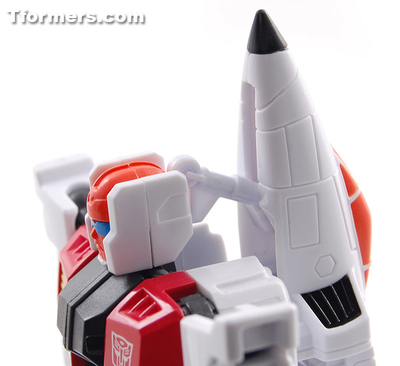 Quickslinger fills Alpha Bravo's space on Superion, either as a profoundly white shin, or a slightly more varied arm. 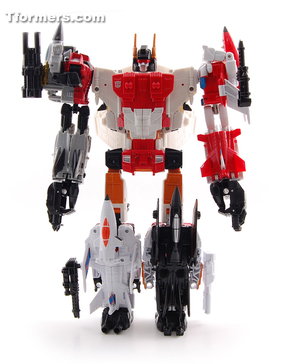 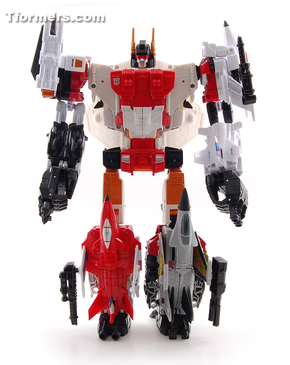 I actually prefer Quickslinger as an arm opposite Skydive as their red chests and neutral body tones give a nice symmetry. I also want to avoid using Firefly and Quickslinger as the same limb type together. Because of how much Air Raid shares with Skydive, I want to minimize that these two share a mold outright. Of course the other option is to sideline Firefly and keep Alpha Bravo in rotation. 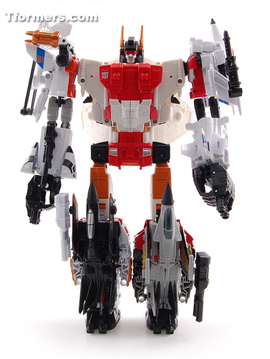 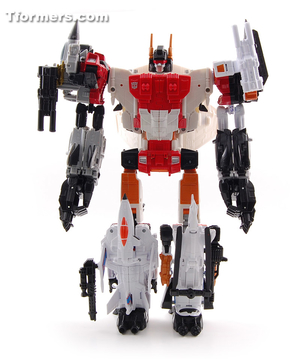 Or you could forget combining entirely and have Alpha Bravo and Quickslinger go on awesome VTOL buddy cop adventures together! 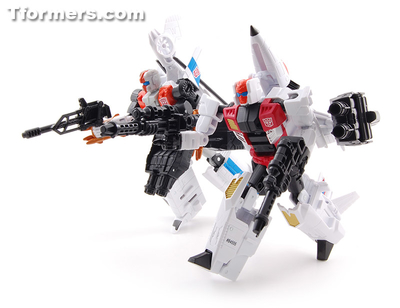 Quickslinger didn't come out quite perfect with the change to the all-white plastics, but everything does still work well enough to get by. Building a G1-accurate Superion is a nice option to have for sure. I had no problem continuing with Alpha Bravo as an arm or leg, and I still don't. Getting this is by no means a reason to drop any of the existing team. Easy swapping and universal compatibility means that adding more team members just increases the fun. 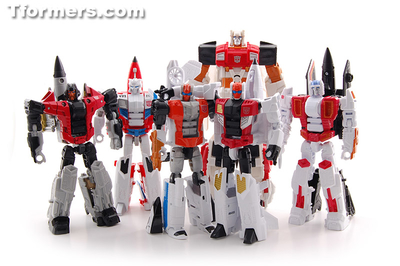 If you end up having to choose one or the other, I'd ultimately say go with Brake-Neck first. But if you can get both, definitely do. Oh, and for those curious, Quickslinger comes with a reprint of Robots In Disguise #11, now designated Combiner Wars #3. This is most likely the comic that Alpha Bravo will come with when the Aerialbots reship over the summer. 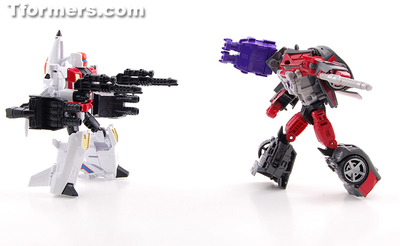