With my thanks to Hasbro for sending this along, today I'm going to talk about Combiner Wars Brake-Neck. Brake-Neck is a redeco of Dead End from wave 2, based on the Wildrider character but renamed for trademark reasons. Starting on May 22nd, this figure along with Quickslinger will be available exclusively through major online retail outlets, so be sure to go check out your favorite to get hold of these. 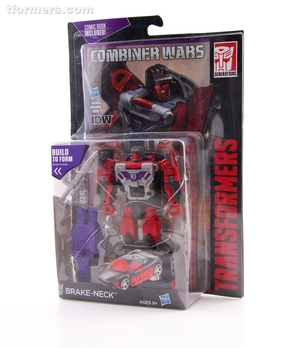 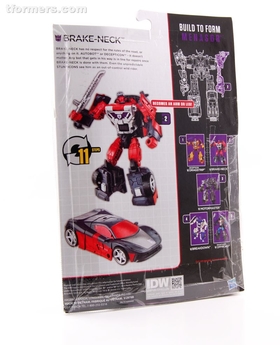 Brake-Neck is truly one of the oddest members of the Decepticon forces. In vehicle mode he's capable of top speeds near 250 mph, which gives him all the momentum he needs for his favorite tactic: crashing in to things. Time and again, Brake-Neck has raced in to combat - functioning as "the tip of the spear" - and ended up in a bent and twisted wreck. He enjoys impact, howling with unnerving laughter before, during, and after his spectacular crashes. In robot mode, his scattershot blaster enables him to target multiple opponents simultaneously. With fellow Stunticons forms Menasor.

An unending barrage of high-speed collisions has left Brake-Neck's sanity in question. Is his recent name change a signal of some sort of processor breakdown? Decepticons normally don't worry too deeply about their teammates, but Brake-Neck is needed to form Menasor. if his downward spiral continues, he may find himself replaced. Forms either an arm or leg of Menasor, the combined form of the Stunticons.

Since this is a redeco, we can just quickly go over the workings of the robot mode. There's not a lot functionally different here versus Dead End as a result of the changed plastics. I find that the joints have a similar degree of tension as compared with Dead End. That's fine, since Dead End had a really good feel to the movement of his major points of articulation, and I get that same kind of feeling here. 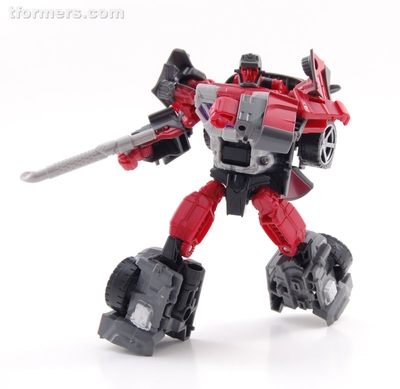 Mine has a slight build defect in the right leg where the thigh swivel pushes itself apart when I try to use it, but that shouldn't be taken as production wide just based on this instance. 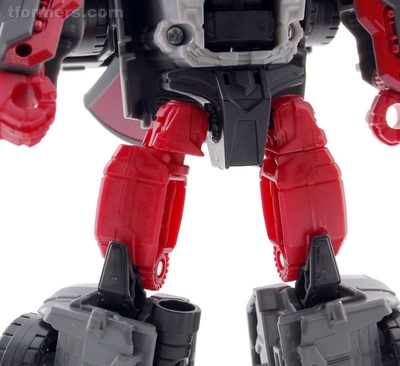 Now, some of the problems I observed with Dead End still apply here. And I'm leaving aside the issue of the weird arm/door panel structuring. Majorly, the legs still don't feel like they secure closed. The stiffness of the hinges keep them in place, but for as little as I felt Dead End secured the shins, Brake-Neck feels like even less. The mold's ratcheted wrist hinges are still in effect, and they're even stiffer on Brake-Neck. I don't get why they're here in the first place, and they're verging on an active annoyance now.

Sadly, Brake-Neck can't hand carry the combiner part weapon any better than Dead End can. But unlike Dead End, we have fallback options. 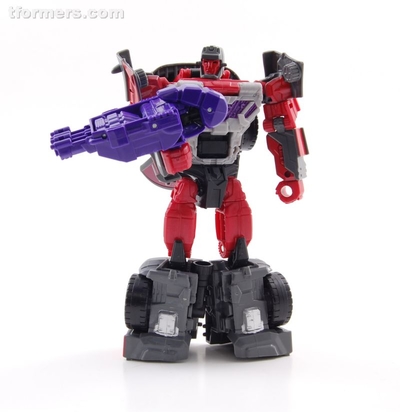 Brake-Neck's shoulder ports are just tight enough to hold the connecting peg. It may not be ideal, but the hand/foot piece does have a place to go as a shoulder cannon. More than Dead End could do. 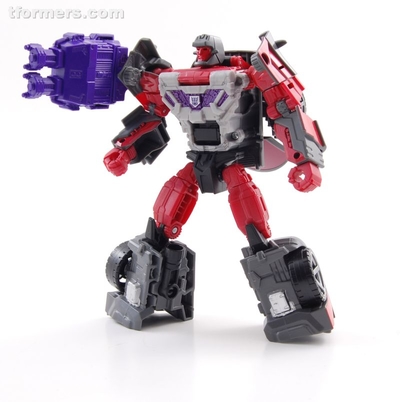 And of course with Dead End on hand, Brake-Neck can go all out and double up. 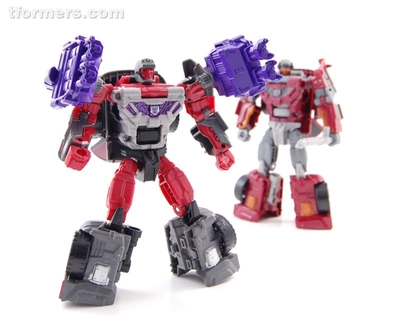 So, I really like the robot mode deco. The light grey on the torso contrasts in a way I find super appealing amid the darker grey and red and just a little black. 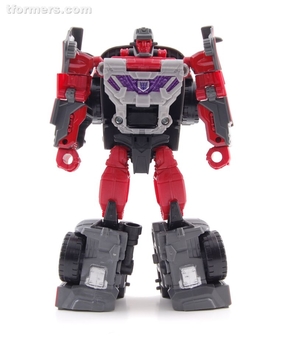 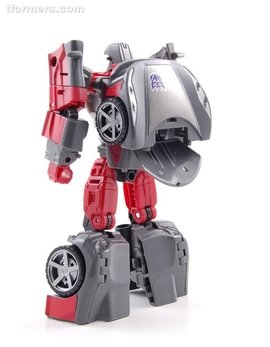 The red plastic has an interesting quality about it and the way it catches light makes me think of the ribbon style hard candy you usually see turn up around Christmas. But yeah, the color layout agrees with me in a really good way. Brake-Neck is FUN to look at because the deco is so wide-ranging. 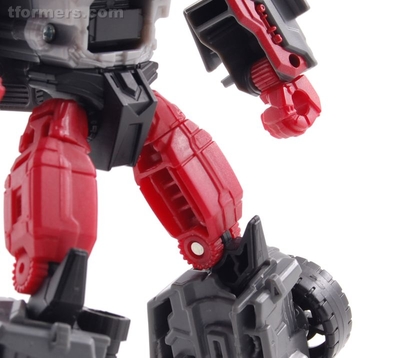 The new headsculpt isn't my favorite, I'm afraid. It's hitting the visual elements of Wildrider, but does so in a way that feels generic. The face itself isn't much help. It looks a bit Andrew Wildman with rounded edges and clear bone structure, versus flat panels and straight lines. It's fine if you like that, but it doesn't exactly mesh with the rest of the team. The paint over the face is also softening the sculpt details which is not helping any of this. 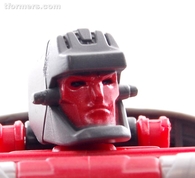 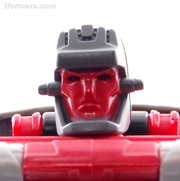 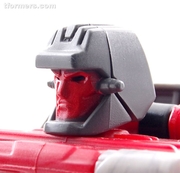 This mold is easily my favorite of the Stunticons to transform. While the arrangement of the hood and chestplate can be tricky, most everything is simple moves that proceed without trouble. It's a great example for the benefit of less complex transformations.

The deco doesn't really manage as well here. The main car body is just dark grey, and while it has a certain cleanness to the appearance, it's still kind of dull. Also we're presented with an incredibly frustrating paint and plastic match failure. 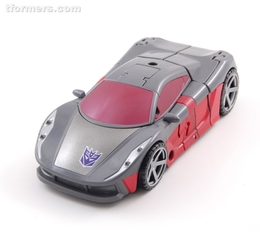 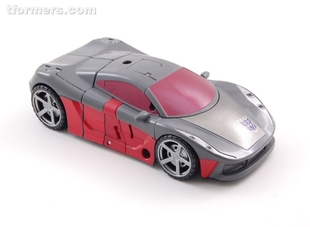 The stripe on the side is this nice almost orangey red. But because of how the toy is built there's a chunk of unpaintable plastic in the middle. And the color between these two elements is not even close. But look up! The windows are all painted a dark red that is a VERY close match to the plastic. You can see because those also back right up to each other! How would using a paint color that matches the unavoidable bare plastic be anything but the most preferred solution? I don't get it. 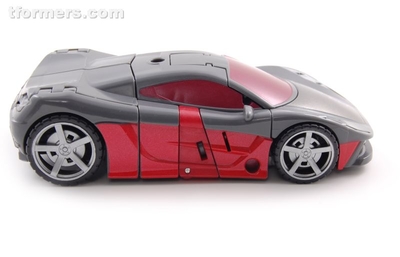 On a more positive side, the gunmetal patch on the hood looks really good in the middle of the dark grey. Plus we get painted hubcaps again which are also looking quite nice. The back end of the car is sadly a little bare. On the other hand, there's not a space that distinctly looks like it should be a rear window to futher highlight the absence of paint. 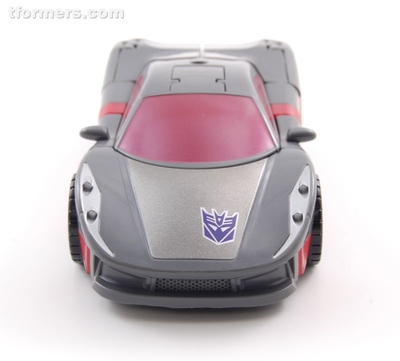 In combined form, Brake-Neck - just like Dead End - probably makes the second best arm behind Drag Strip. The catch is you have to make sure to arrange the robot arms just so, or else they get in the way of the shoulder and suddenly make a very bad Menasor arm. 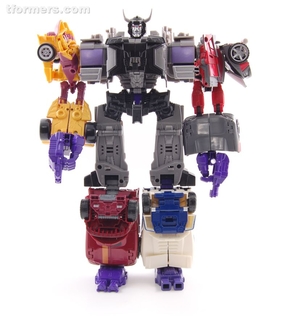 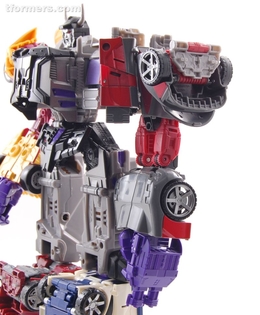 That being said, Brake-Neck shares a problem with Offroad here. The forearm - the rear half of the car is finnicky about staying tabbed together, to a degree that Dead End never displayed. As far as making a functional combiner it's not a big problem as long as one of this mold works well as an arm. With Drag Strip here, we're guaranteed to always have another good arm to use.

Leg mode is a little more solid just on the basis of not asking the toy to do nearly as much besides stay in mostly vehicle mode. While generally I'm against using same-mold team members as matching limbs, Dead End and Brake-Neck actually make a really nice pair of boots together. There's just enough variance in their deco too so it's not instantly obvious you're using a mold pair, too. 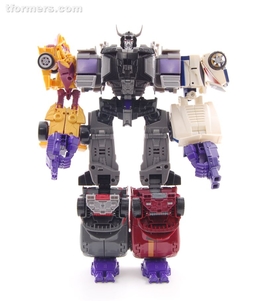 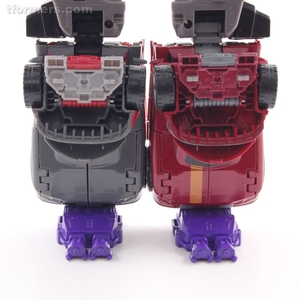 This is a case where I'm really glad to have a replacement option with my Stunticons. Offroad presented too many irritating issues. Brake-Neck shares one in being structurally less than ideal as an arm, but wins handily in most other respects. Getting slightly better plastic tolerances in key places than Dead End is another plus Brake-Neck can offer. 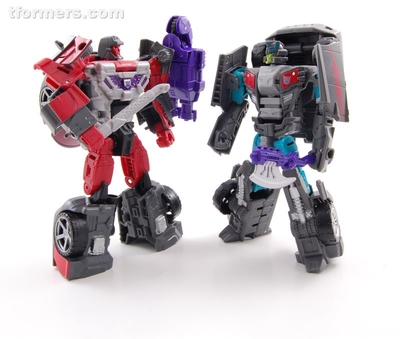 In a situation where you have to choose one or the other to get between this and Quickslinger, Brake-Neck should definitely take priority. 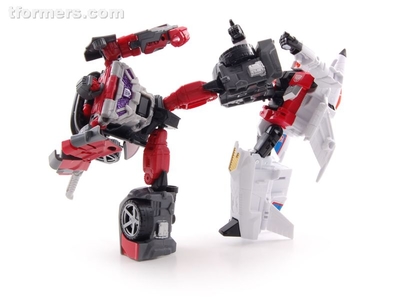 He brings a good bit to the table individually, and contributes significantly to making a better Menasor, even apart from being able to make your combiner more G1 accurate. 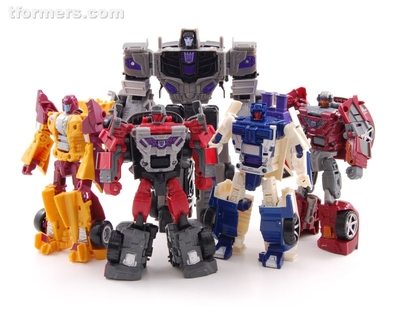 Oh, and for those curious, Brake-Neck comes with the same reprinted comic issue as Dead End, so no new material here I'm afraid! Even the cover art is the same as Dead End's, just recolored and with a new head. 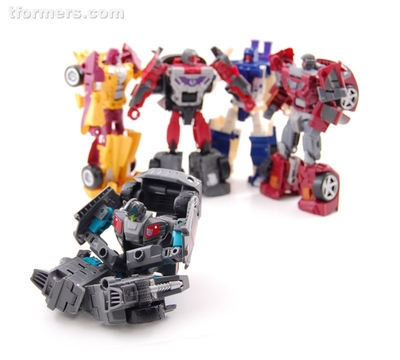