A gentle, kind-hearted Autobot, First Aid wants to heal everyone and everything. And as a member of the Protectobots he's set out to do just that with the help of his surgical fist lasers, crystallizer cannon, and... Medical Axe?

First Aid is just as likely to be the first on the scene to help a wounded bot as he is to show up to repair a broken dishwasher. To the Protectobot medic, the greatest enemy is malfunction. Human, bot, or machine- if it's broken, First Aid won't carry on until it's back up and running. 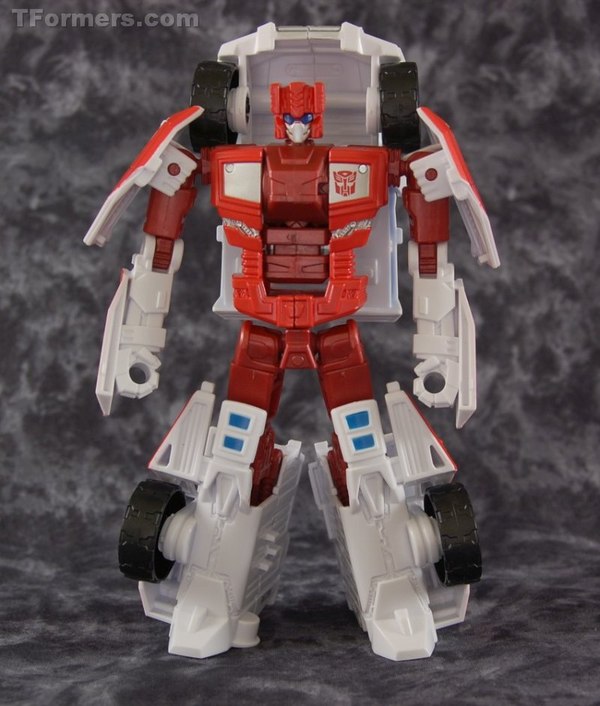 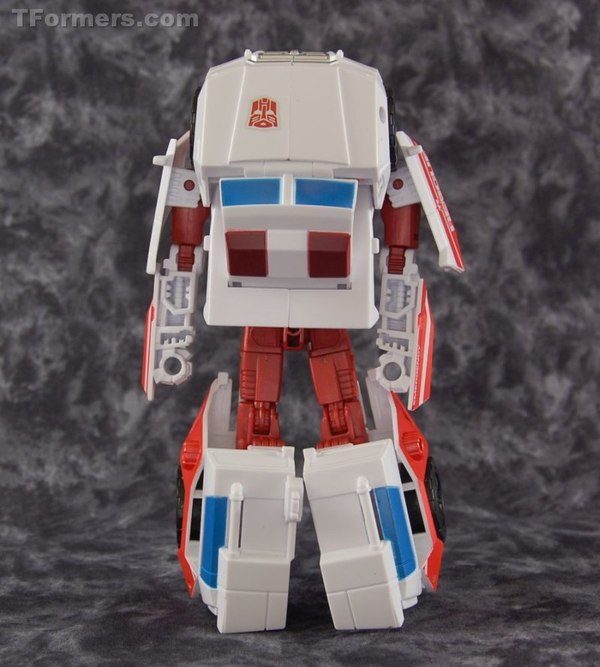 Barely-recognizeable as a mold-mate of Stunticon Offroad, First Aid does a pretty good job of aping the original character model, though the red and maroon parts are largely reversed. 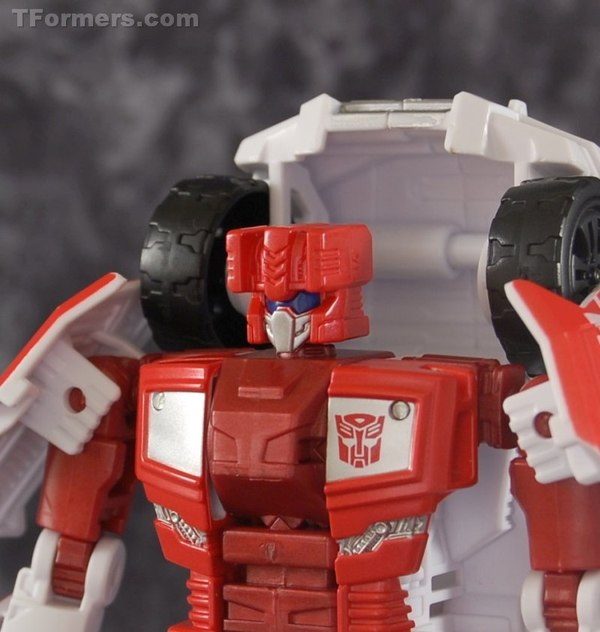 The blue of the optics is a little darker than the others', probably because it's the same blue as on the knees and vehicle mode. Despite largely being shades of only two distinct colors in robot mode, First aid looks nice, and his proportions are very heroic. The kibble layout kind of reminds me of Animated Ratchet, too.

First Aid's head swivels fine, but the Scramble City square-pegness of his head prevents most tilt. 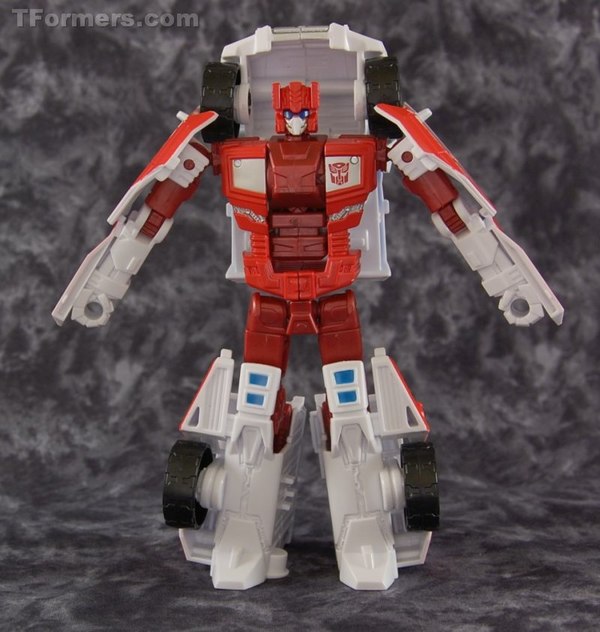 The shoulders swivel okay, but the backpack and shoulder armor should probably have an interaction warning. 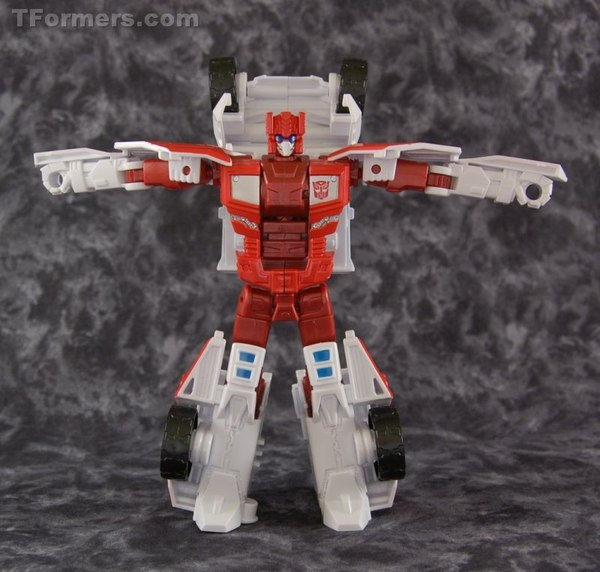 You could let the vehicle hood hang straight back like it did on the G1 toy... 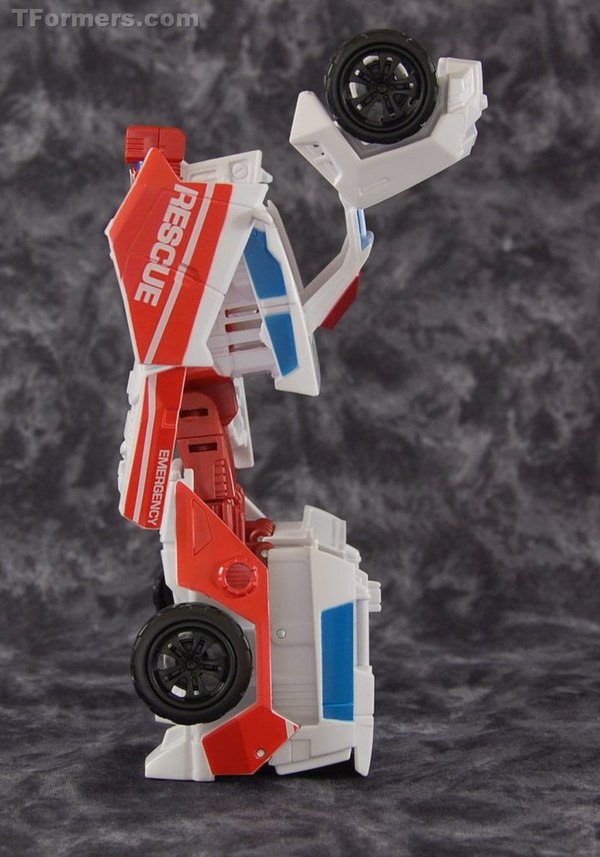 ...but that doesn't look so good in this modern age. 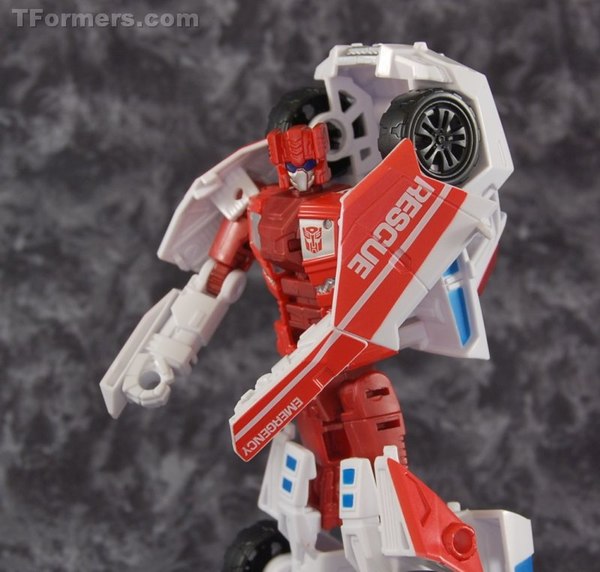 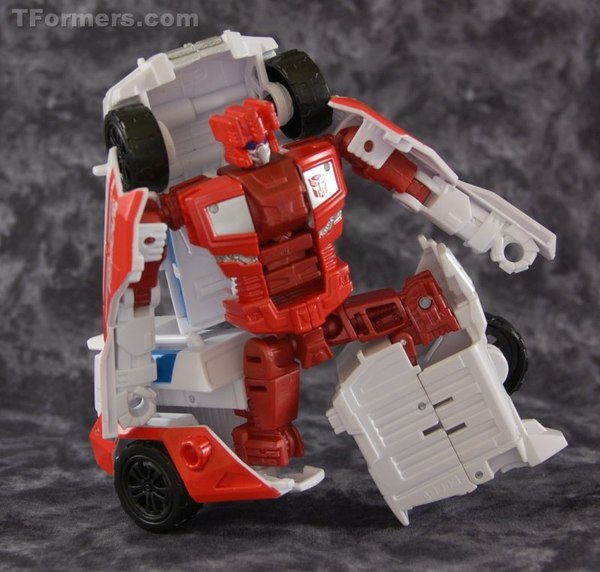 The waist swivels stiffly but very well; it has no locking point though. The hips are very square, and just like the arms have good forward range but lousy lateral movement. The thigh swivels are smooth and work fine. The knees get 90 degrees of flex, which is pretty great for those huge lower legs. They're carried over from G1 as well. 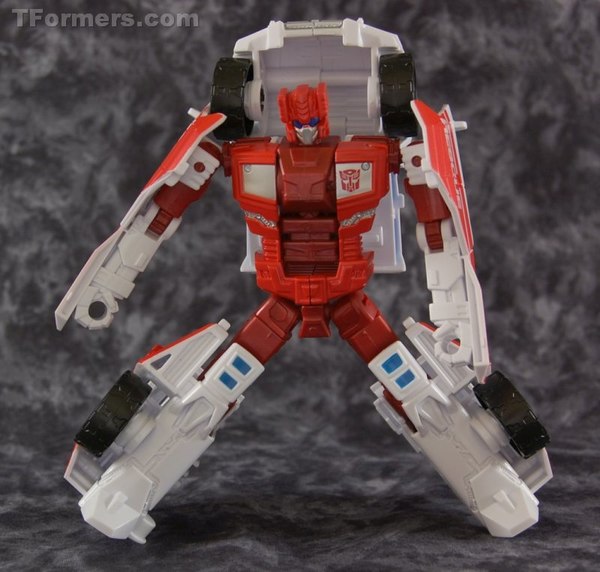 But the large angled feet mean that it's pretty stable in a lot of poses. 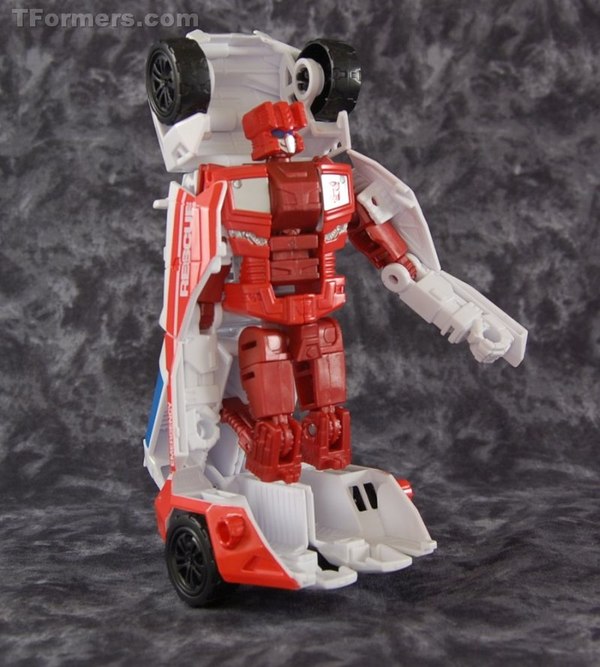 ExVee likened Offroad's transformation to the Aerialbots in his review, and First Aid is very much the same. The lower legs open to fold up over the thighs, the arms fold down, and the nose of the ambulance locks over the head. Just as with the Aerialbots, getting those leg armatures to fold in the right direction can be lightly taxing. On my First Aid, the legs were kind of a bad fit to the body of the ambulance at first, but the tab that fits the back end to the body is working properly now. 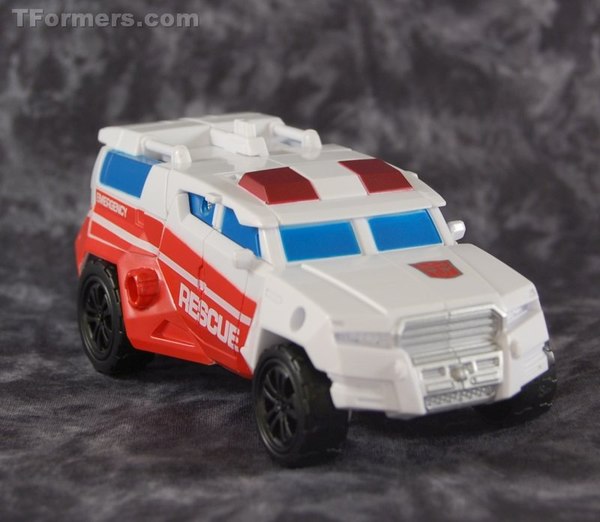 First Aid is an extremely slick ambulance, and he has a more dynamic two-tone paint job than you'd expect on, say, G1 Ratchet. The unpainted rims hurt the look a bit, but otherwise it's a pretty nice-looking vehicle. It rolls freely, and there's a peg for mounting the crystallizer cannon on the roof. 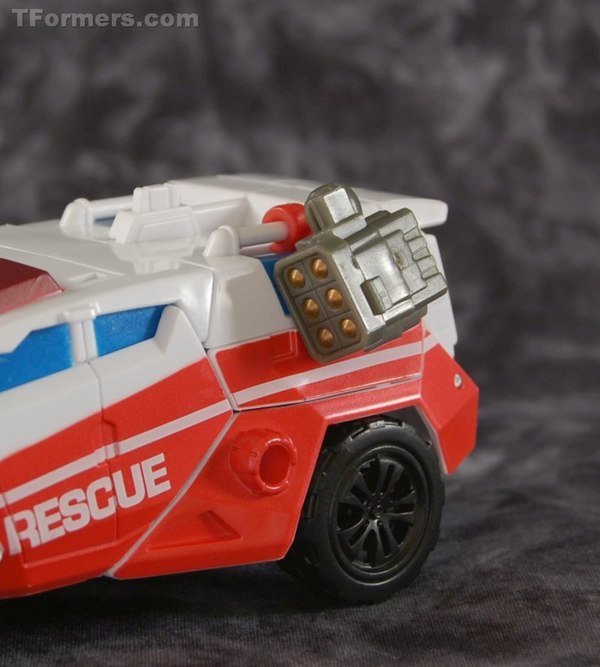 Sadly, the rails on the roof are a half-millimeter too small to effectively function as Miyake Joint rails. I miss those. 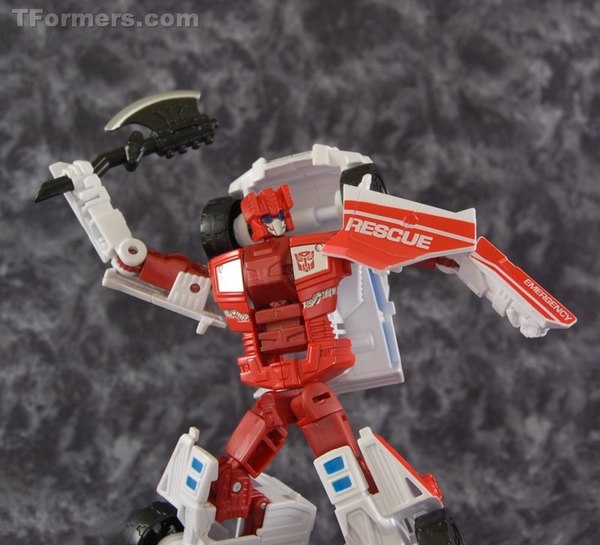 The main accessory is a Medical Axe, reused from Offroad. I mean, he's got surgical lasers that shoot from his fists... 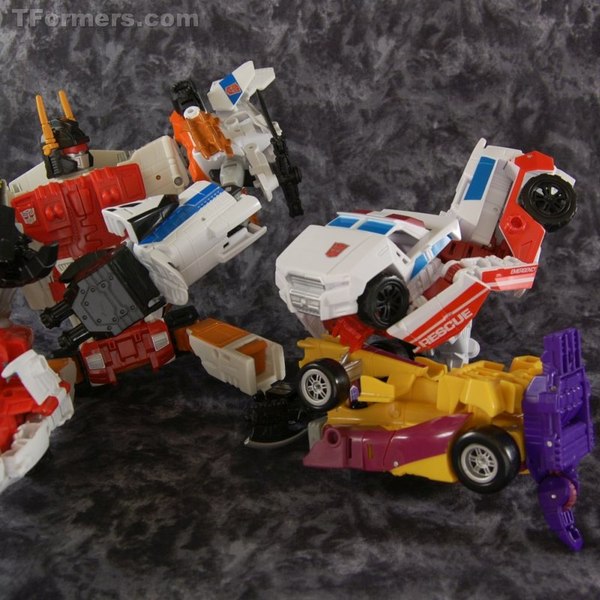 ...but sometimes you've really got to amputate in a hurry, right? 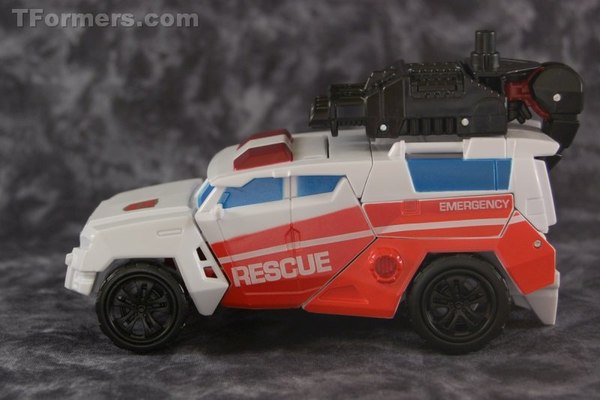 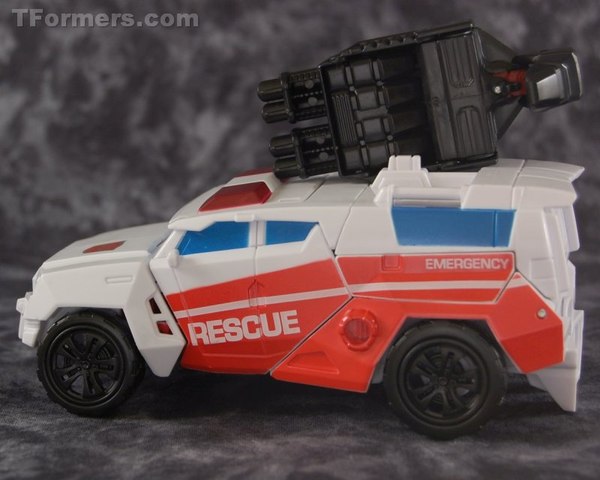 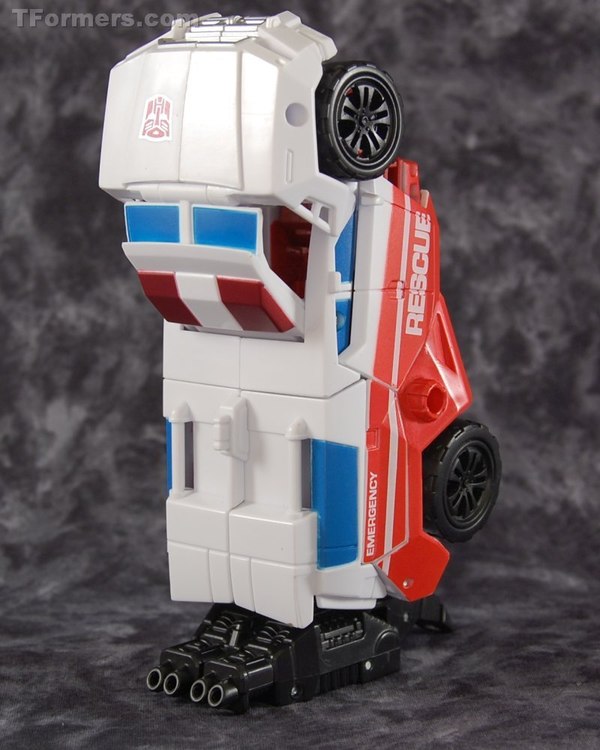 Starting out in Robot Mode is easier for the leg this time, but only because the peg rotation is obstructed once First Aid's legs are closed. But once the peg is rotated out it's all pretty much the Vehicle Mode transformation, less the hood. It's a pretty simple leg, and should pair well with Rook. 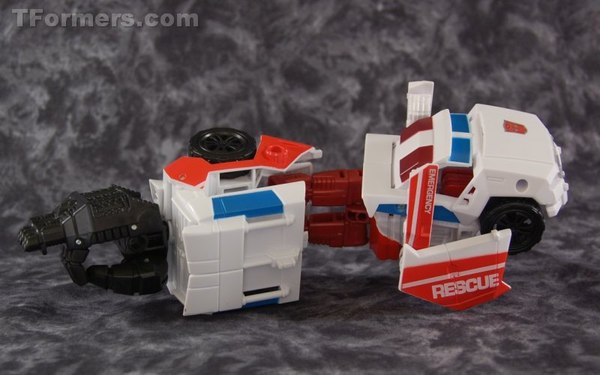 For Defensor's arm, first you bend First Aid's arms backwards and lock them to the back kibble. 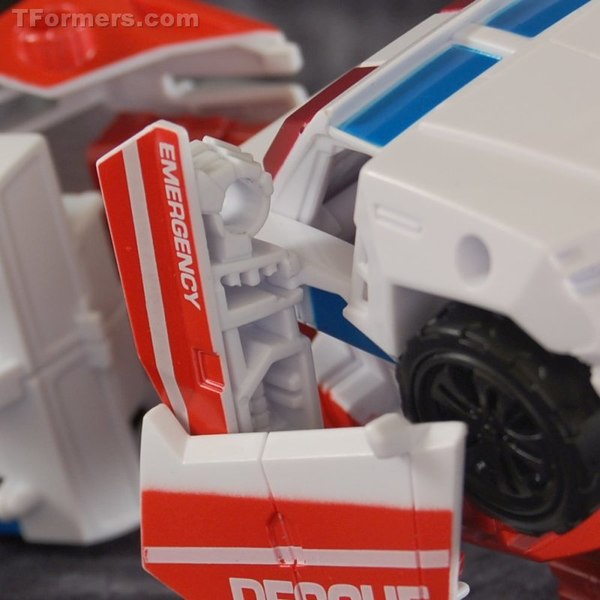 It's not as strong of a connection as I would like.

Then you just swing out the tab, pinch the legs together, twist the waist, and add the hand. The elbow joints are stronger than you think they'll be at first. But... First Aid's arms. They're just hangin' out there, being arms. 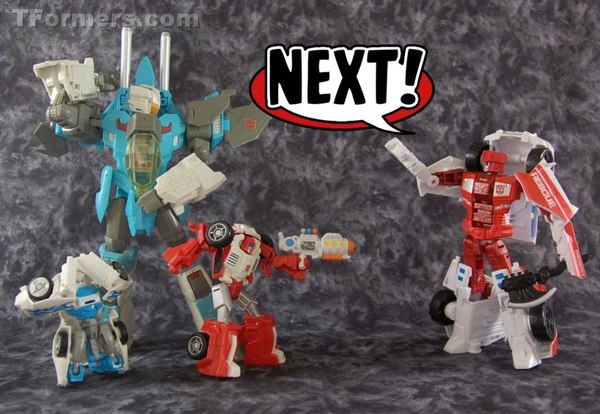 First Aid was one of my favorite toys as a kid, and I'm happy to have a new version of the character. But so far this is the weakest technical figure of the wave, rating a Good on the Figurereviews.com non-numeric rating scale. His arm and hiparticulation is a little restricted, and transforming him the first time was a pain - a problem I expect to be unique to my figure. Even so, he looks great and makes okay limbs. If you're picking and choosing your Combiner Wars limbs - does anyone actually DO that? - he's the least-good figure of the wave. But if you need First Aid for your Lost Light shelf, he should do just fine.

First Aid's comic is The Transformers #36, Part 2 of the Onyx Interface arc that has Prowl racing against Galvatron to find the Enigma of Combination. But of course what it doesn't have, is First Aid. 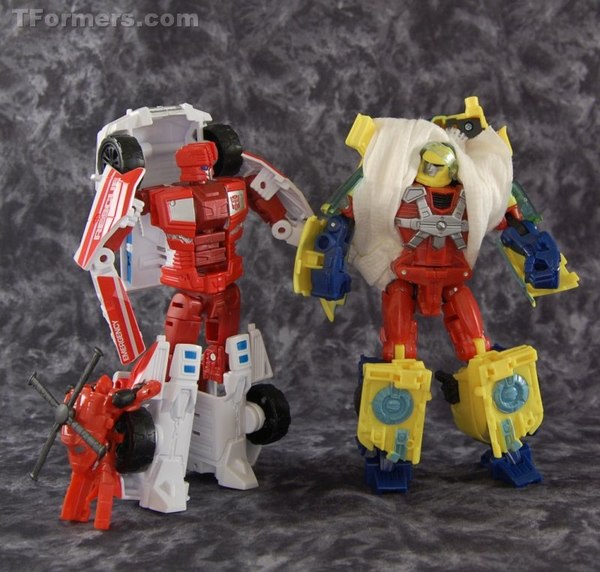