As the minds of Optimus Prime and Prowl do battle within the combined body of Optimus Maximus, the battle between the rioting Decepticons and Starscream's police causes Metroplex's space bridge to begin to destabilize. Combiner Wars Part 5, Story by Mairghread Scott and John Barber, written by Mairghread Scott, with art by Marcelo Ferreira and Corin Howell, colored by Yamaishi and Thomas Deer. 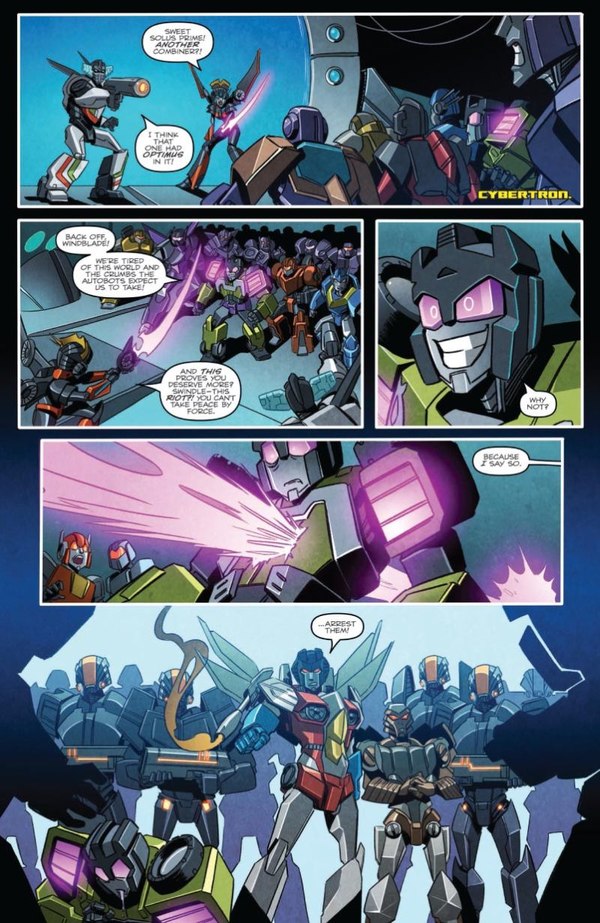 Inside the shared mindspace of Optimus Maximus, Prowl defies the other four Autobots comprising the combiner and prevents their shared body from functioning as he tries to make them - and Optimus Prime in particular - see how correct his point of view is, and how no matter what, people will always fail you. Meanwhile, Starscream and his police force attempt to arrest the rioters in the space bridge room. But Swindle reveals he still has a hand to play.

This issue marks the end of Combiner Wars proper. The next issue of The Transformers will act as an epilogue, but the main push of the story seems to be ending right here. And I have to admit I'm not feeling very satisfied. The storyline all along hasn't felt very meaningful, and that seems to come down to how unimportant the Combiners actually were to it. So much of these issues have focused on Optimus Prime trying to outwit Starscream and then trying to talk Prowl down from being Prowl. The Combiners felt like big props. They were window dressing for a story that really didn't want to be about them. The worst disappointment perhaps lies in the little hints and teases of interesting ideas about the nature of combiners being presented, and then almost as quickly just brushed aside and ignored. This issue gives maybe the biggest direct look at the functional element of a combiner by showing the connection of the five minds of Optimus Maximus. And yet that's just another excuse for Optimus and Prowl to argue while getting nowhere at all. Meanwhile for the most part, Sunstreaker, Ironhide, and Mirage do nothing through this process.

There's two potentially good stories that happened over these past several issues, and either on their own could have developed and been very interesting left to themselves. That is, the political affairs of contacting the first lost colony and getting the interplanetary council established, and a story about the rise of combiners. Either one independently would have a really good chance at turning in to an interesting plot. The former would almost take The Transformers back to its RID roots with the surprisingly fascinating Robot Politics storylines - something I and others have been wishing for since before Dark Cybertron happened. The latter would actually serve what this whole event was arguably supposed to: highlight what combiners are and what they can do and creatively fitting them in to this world. But because both things were pursued at once, neither came close to fulfilling their potential. The combiners were wasted, and the political storyline was abbreviated to the point of losing most any interesting nuances that could have developed as it went. Ultimately, the most interesting part of this issue was the last couple pages that foreshadow stories to be upcoming in the Windblade title - things that seemingly will have nothing to do with the combiners at all. Maybe that's the sign that this was a failed crossover event, that the part I ended up caring about from it the most was the promise of stories that weren't it.

Art was on the other hand really fun. Marcelo Ferreira did the majority of the interior work for this issue, and while I wasn't very satisfied by his fill in work on Drift: Empire of Stone, his own style on display here resonated super strongly with me. There's a bit of a Geoff Senior element to it in the way the characters are designed, but without some of the particular oddities of that artist's style. It's maybe a bit hard to explain. There's good structural concepts in the linework, and the balance of detail and cleanness is well upheld, so you never get something looking weirdly busy, but it's never simple or left wanting. Setting this off the rest of the way is the coloring by Yamaishi, who brings a kind of muted style, with a lot of flat, less saturated colors that give a look of classic comic book style. This meshes so incredibly well with Ferreira's lineart and the two together really complete each other. I want to see more from this pairing, especially if it might somehow be an issue whose story theme also specifically would suit this type of art. But really, just get Ferreira on the short list for art fill-ins and let him do his own thing style-wise. He's got a lot to bring to this.

Corin Howell only did a few pages this issue, though she'll be taking on full issue art starting with Windblade vol.2 #4. But I really dig what I see. She's got an incredibly expressive style. There's a simplicity to it that I think will work well as a standalone, but when paired in the issue with Ferreira's more detailed work comes off looking a bit too far to the other side. One page in particular might make this a bit clearer. But I'm very much looking forward to next month and seeing her take on the whole issue herself so I can get in to the art without needing to compare it against surrounding pages. The coloring by Thomas Deer is bright, vibrant, and saturated. It works together with Howell's art and creates an almost cartoonish look, which I like quite a bit. Of course, bright and saturated also pushes the contrast with the other art this issue and its flat and muted coloring. Pretty much, an exercise of extremes. But for as much as I may talk about a contrast, when reading the issue the switch is not really jarring at all, and that's a thing I find interesting all by itself. For as different as the two styles of presentation are, they somehow kind of work together. It's weird.

Our final note is an abridged form of Cover Watch!, just to point out that the retailer incentive cover gives us finally our first full look at the clean official art for Optimus Maximus. This at least pretty much represents what it should actually look like. Ferreira drew it in the issue a lot like Livio Ramondelli did at the end of Part 4, which just leads me to think that when these issues were produced there was no kind of design model or anything the artists could be given, except for that they looked at the torso mode of the wave 1 Optimus toy since those details are actually present on Optimus Maximus in the interior art. Oh, and spoilers: At no point did Rodimus turn up in this issue to become part of the torso. Sorry.