Meanwhile, elsewhere in space, a band of Decepticons left aimless in the current age of peace take a quick trip to try to capitalize on one of their disposable assets. But not everyone approves of this plan, and that's not even the worst part of the day. "Some Of My Best Friends Are Autobots" written by James Roberts, pencils by Alex Milne, inks by Brian Schearer and Alex Milne, colored by Joana Lafuente. Special photography by Maziar Shahsafdari.

Over the last three years, the Scavengers have fallen in to many adventures in their travels around the galaxy. But alas in all that time what has eluded them is true direction and an enduring purpose beyond... well, scavenging for their immediate needs. As a result, tensions have risen, nerves frayed a bit more, and seemingly every little progress forward followed up by just that much more setback. And so, in the end it comes down to Misfire and Spinister - the last surviving Scavengers - locked in a battle to the death to settle the score once and for all. 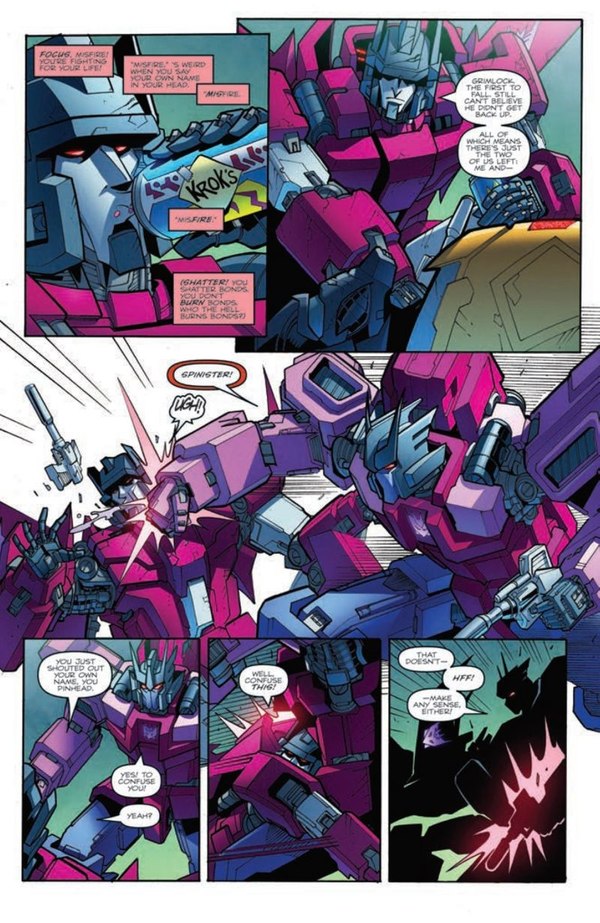 Let's be honest, we've all been here, right?

Well, we saw them briefly during Remain In Light as we jumped around to observe the effects of the Kill Switch, but apart from that, it's been THREE YEARS since getting any time with the Scavengers. This is made up for - sort of - with a recap page highlighting all the improbable adventures the group has been on in that time, and to be entirely honest? The issue takes a sharp downward slide after that page. You see, the story we lead in to is one of visiting the group as they're in a state of decline. Not everybody is entirely happy with their life anymore, and indeed not happy with all of the traveling companions. It very much takes you in with the feeling of a story where the band is threatening to break up but will find it in themselves to keep together and give it another go by the time we're wrapped up. Maybe that part won't happen, that's for next month to tell us. But while I don't think the story shouldn't be told, I think it's not what should be the second proper story for them. I would say that we needed at least one other visit after the introduction before getting to this point. The recap page is more than anything just a joke. I don't feel like there's a sincere effort to try to fill in the group's time together with it. The quick peek in Remain In Light even gives a good hook for that intermediate piece, where it's these guys versus the Galactic Council. That's just one possibility, and others exist. The point is, we don't know these guys enough right now for this to carry the weight it needs to, and so a lot of the personality conflict going on falls flat. There's decent bits and pieces mixed in, like why in three years they never made it back to Cybertron, a shift in intent that makes a lot of sense, but also serves to remind how long it's been since that first appearance where the then-current state of Cybertron made it almost make sense to want to head back at the time. But that's just it, it's little small things mixed in to a sadly unfulfilling mass of story. It's not good enough to sub in for the missing time. In my mind it feels the same as if the next time Victorion's team appears, the team members are going through some personal shake up. The context for caring about it isn't rooted yet, so it's going to lose its impact. Fans care about the Scavengers, but I think they care about them in a way mostly driven by wanting to see them get explored and developed more. More time with the group to really develop a direct attachment to the characters. That whole step has been skipped, and I can't help thinking that it's because so much time has gone by that it's been sort of forgotten that they never got any real intermediate development.

Both the linework and colors are as nice as ever. It's always fun to get to see new environments and locations since everyone involved gets a chance to stretch their legs a little bit. The location for the second half of the issue is a really cool looking space for how it's visually designed, and the ambience of the location is filled in well with the colors, really helping to realize the kind of place that it is. There's some nice big page filling images too, and the final page art tends to stand out pretty well for me, but it's far from the only one. The battle at the start has some really nicely done panels, too. If I was to raise any complaint, I think there's just too much going on. Too many panels per page just because too much has to happen. So some elements are getting crowded and squashed down to a state where they're smaller on the page than they ought to be. The art team is doing their best with it, because you can still work everything out. It's just coming off as cluttered in a way I think normally it wouldn't have to. Really, when it gets down to it, that's not a bad complaint to have when it's the only thing I can see to say bad of the artistic effort for the issue: It's solid all around, there's just too much of it. Could be worse...!

I am looking forward to the next issue, though more based on what this issue leaves off on. I'm hopeful that the Scavenger story will pull it together better next time than it has here, but I'm not counting on it too much. Alas, while I have been among the number desiring their return, if next issue doesn't improve on their use notably, I'm gonna end up in favor of retiring the characters, I think. They've got lots of potential. They basically have their own book's worth of potential, and maybe that's the problem. They are too much, and it's not possible to work them in satisfyingly alongside the story of the Lost Light. So maybe it is better to leave them alone until more adequate story time can be given over to them and use them to their best.