Team Bee has a new lead on the elusive Cybercomrade movement, but with Team Prime being less than honest with him, Bumblebee needs to keep his old friends occupied. Road Trip! Transformers: Robots In Disguise #3 is written by Georgia Ball with art by Priscilla Tramontano and colors by Josh Burcham. 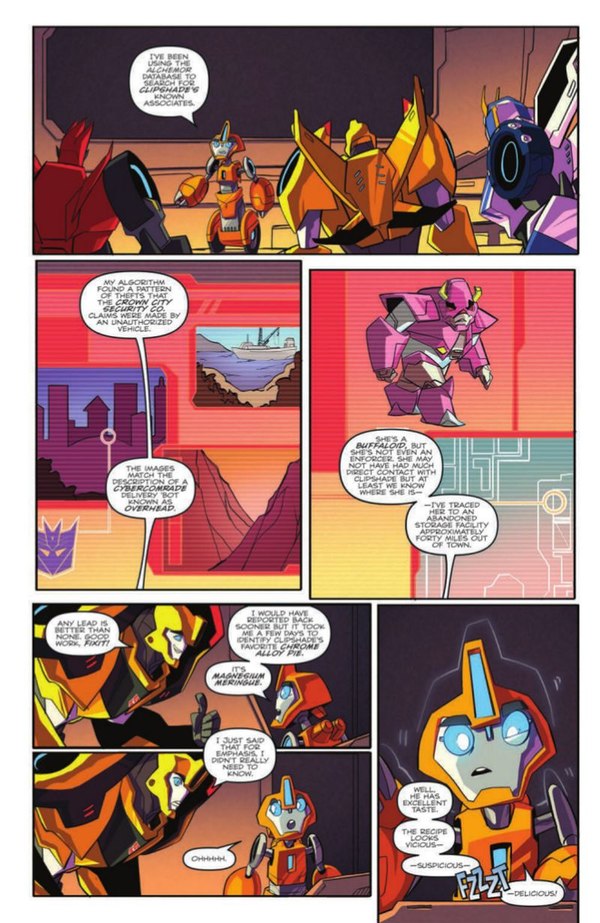 Team Bee compare notes on the latest episode of Storage Wars-esque made-up TV show Bin Battles -but Strongarm's not really a fan. Then Fixit discovers a lead on the Cybercomrades - a delivery bot named Overhead. In order to catch and interrogate her without rousing the suspicion of Team Prime, Bumblebee needs a distraction. Time for Denny, Russell, and Sideswipe to go on a storage auction tour! Once Overhead is under lock and key, they use her to make contact with a bigger fish - but Bumblebee doesn't like what he finds.

Robots In Disguise continues to use the long-successful comics and television format of having a self-contained story in each issue with a hook to a larger overarching story. Now that we're in what seems to be the latter half, the focus is shifting to that larger plot, which feels natural and makes sense. It's not groundbreaking in terms of storytelling, but it's solid - which is exactly right for an all-ages book. It's nice to see a comic series that is doing a good job of executing a medium-length, trade paperback-sized story arc, neither feeling drawn out nor rushed. That's a difficult thing to do, and not a structure that any of the other more long-form Transformers comics are using right now.

It's also nice to see Georgia Ball adding more female Decepticons for the second issue in a row, and this time not just as a disguise for Strongarm! RID is following on Strongarm's lead to use body types other than the more "standard" female body type seen on bots like Arcee. Overhead is a Buffaloid, and built exactly the way that designation would lead you to expect. It's excellent news for Transformers comics that it's not even a question that you'll see multiple women in a single series anymore; it's even better news that we're starting to see the same range of shapes you get between, say, Bumblebee and Grimlock.

Priscilla Tramontano's art continues to be expressive and fun and the battle between Overhead and Team Bee Minus Sideswipe is easy to read and well-choreographed. There's a bit less fun background material in this issue, but there's still a panel or two worth some good close scrutiny. Josh Burcham takes over the coloring reins entirely this issue, and he makes sure the book is bright and colorful and pretty. I do feel like Tramontano's art had a certain something extra when she was coloring it herself - not a surprise, right? In the first issue particularly, she nailed a contrast between slightly muted, almost painted-looking background tones and bright foreground characters. It was just right for a book based on an animated series. Burcham's coloring is certainly no less skilled or readable, but just represents a different approach.

Tramontano's coloring style is well on display on the cover, which uses a combination of focus and earthier background colors to make Denny, Russell, and Grimlock pop. Meanwhile, Josh Burcham's retailer incentive cover expands on the meeting between Arcee and her Number #1 Fan Strongarm from the previous issue. For whatever reason Burcham's angular style works better for me on Strongarm than on Arcee - but your mileage may vary.