Slug has hit rock bottom, and the other Dinobots are likely to be pulled down with him by their loyalty. But Slug may have a lifeline when a corrupt cop comes to him with a job that only the Dinobots can do. Written by John Barber, illustrated by Livio Ramondelli. 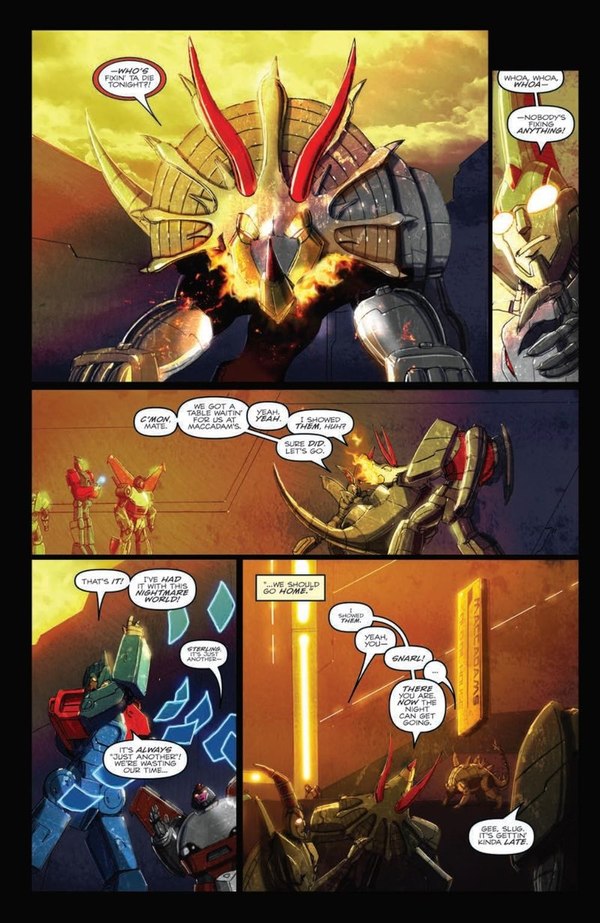 Previously, in The Transformers: The Dinobots are fine; Slug is the problem.

With Cybertronian society evolving thanks to the integration of colonists like the Camiens, Slug is finding it more difficult to get along in the already difficult post-war world. Missionaries proclaiming the virtues and divinity of a Prime he now despises only make things worse. Slug has fallen to near-bottom, and a run-in with Barricade pushes him the rest of the way down. But in his jail cell, Slug gets an offer from the ex-Decepticon cop that could be the start of a change for him.

Transformers Punishment hit pretty hard on making the Dinobots look awful and laying down that the new world isn't one they can be a part of, and Redemption picks up and runs with that idea. Except that it isn't the Dinobots that are the problem, it's only Slug. In fact, most of this book is only Slug. There's not any chance to see inside the other Dinobots - they're just along for the ride because they're a package deal, even though they're trying pretty good from what we're shown to actually behave themselves and get along with civilization. This is a 48 page book, double-size nowadays, so there ought to be plenty of space to get a handle on how all the Dinobots are internally responding, but all we see is Slug's point of view. There's a missed opportunity in this, I feel like. We see the Dinobots acting as a mostly unified group following behind Slug, but Slug is acting awful most of the time and it might have been nice to see the unit end up splintering as a result of it. That would have been credible and felt fairly real, even if in the end the whole team stayed together. The whole things comes together in a particular way too that I kind of understand going in that direction, but at the same time feel really unsatisfied because it seems like an easy way out. I want to talk more on that, but it's spoiler material, so I'll have to let the specifics slide. The covers pretty much give away that Bludgeon appears, so I will talk on that. His inclusion feels pointless. I see it as just trying to account for a loose end that both didn't matter that much and probably ought to have been saved for a more significant occasion to take advantage of. His role in the story could have been filled by any number of other characters, nothing about it was specifically Bludgeon. My take is that Bludgeon was unaccounted for after Dark Cybertron was over with, so he's who got pulled out for this role just to settle that. It's weak use of a character.

The underlying story is something I want to like. The plot being undertaken by the characters is something I get and think is a strong concept. And perhaps in a different context it would have had a better outcome, because we know Barber is capable of bringing in a concept and building it and working with it and making it all pretty cool. Maybe it's because of the nature of isolation this book had to have that stops that from being able to happen. I don't really know, I only know that how it's handled doesn't work for me. It's put out like a big stakes thing, but I don't feel like you can jump right in that within the first few pages having no other background and really have the reader get caught up and invested in what's happening. I think Slug learning at an early point what it's all about might have hurt it too. We're going through Slug's POV, so let him be that. Let him not get the picture until later, let the importance grow a little more slowly for character and reader so it can develop by the time you bring out the reveal. But it was rushed, and if you're going to give away the mystery right from the start and rely on the procedure around it, you better be sure that procedure is executed really well.

I still think Livio is showing some gradual improvement in readability. The issue doesn't seem as heavily effect filtered as other works have been, so it's easier to tell what's going on. Much of the time you can read the structure of the characters more clearly too, though there are still points here and there where you have to stop for a minute to figure out who or what is being focused on at the moment. Again, small steps. This issue takes place almost entirely in the wilds of Cybertron, and that's probably to the benefit of the visuals. Rather like how Livio worked thematically for the Dead Universe scenes of Dark Cybertron, the chaotic and tortured landscapes of Cybertron beyond the tiny foothold of civilization are a good place to put Livio to use. His lack of a particularly "clean" finish kind of sells the setting to an extent. The style works in this application, so I have to give some credit for that. I have a hard time actually imagining the hostility of the world coming through as clearly had someone else done it. The visual side is far from perfect for my tastes, but I'll absolutely acknowledge that there are ways that it really does work for this book, and that there is some just general improvement to be seen.

Now, generally I don't tend to make purchase recommendations when I write about comics. I'm making an exception in this case, because it's an unusual case anyway. This is a double size issue. It costs $8. I don't think you should spend $8 on this book. The amount of story content feels stretched to fill that space. I don't know if I'd feel like the story overall holds up stronger if it had been paced to fit 24 pages instead of 48, but there's not enough here when I feel like I can let it go without the warning that I don't think it lives up to the cover price. That opinion might also be different if we'd had art from someone else, I won't lie about that. Just everything together, I don't see it as worth it. Plus, I figure by the time anything established in this book comes back to be used in a main title, it'll be far enough down the road to need exposition or flashbacks to set it back up, so you probably won't be particularly missing out on content if you skip this. The choice is as always yours to make, but for possibly the first time in my years of doing this I have to recommend skipping. Or at the least, wait until it goes to half price on Comixology if you're still interested in checking it out. $4 is better than $8!