So first up we're going to take a look at Vortex. It's a straight up recolor of Alpha Bravo, so we're not gonna go in to very deep detail on the figure, and mostly just talk about the changes. 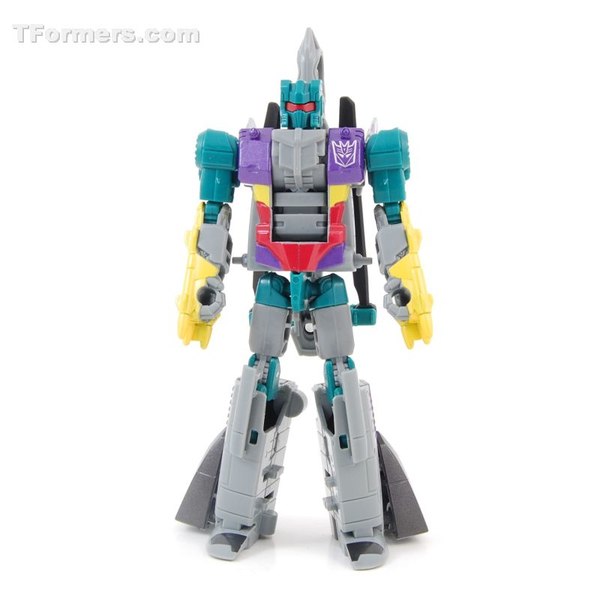 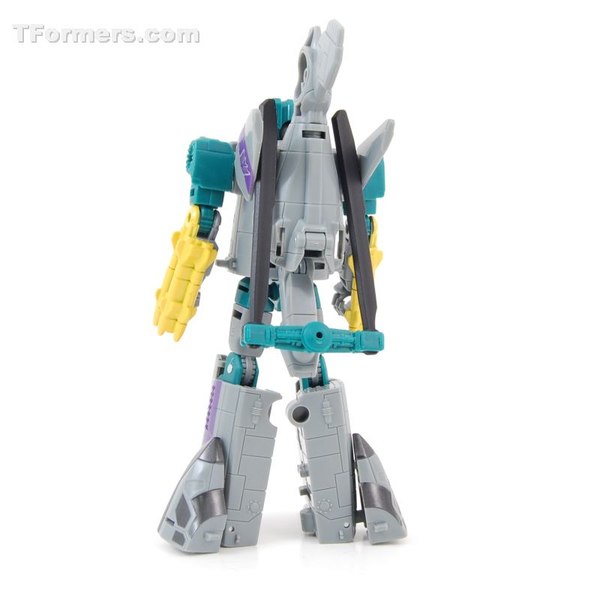 Alpha Bravo kind of ruined things for Vortex, at least as I see it. Alpha Bravo was recognized as having a very Vortex-derived head sculpt, making this eventual use very obvious from the start. But for reasons, Alpha Bravo grew in to the face more and more and made it his own. So what does that have to do with Vortex? I can't see it as anything but Alpha Bravo wearing a Decepticon suit. Alpha Bravo had a year to lay claim to this body before Vortex got to it, and I have a real hard time separating that character from this figure. 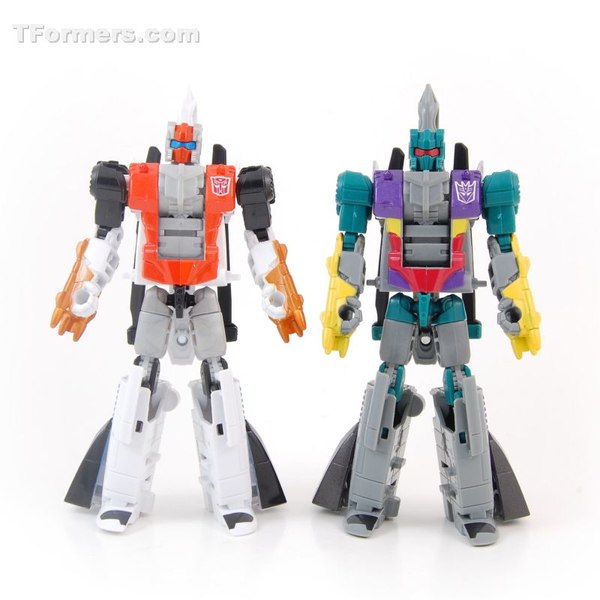 There's not any retooled parts, and to be fair even Blades only had a new head. But it helped. Vortex needed something to stand out. New forearms, or maybe a different tail rotor design. A new head would be silly since this was already a Vortex head, but it's not working with the absence of any new parts. 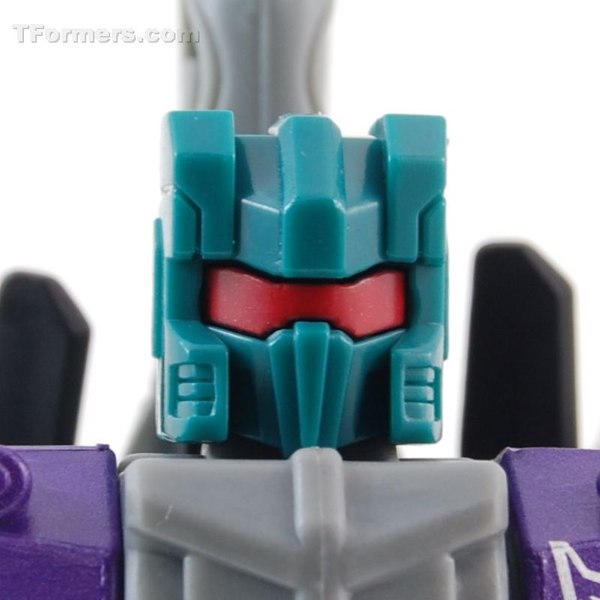 Also not working is some of the deco choices. The red and yellow on the torso calls back to G1 toy sticker colors, but they exist in such a small space here that they seem out of place. 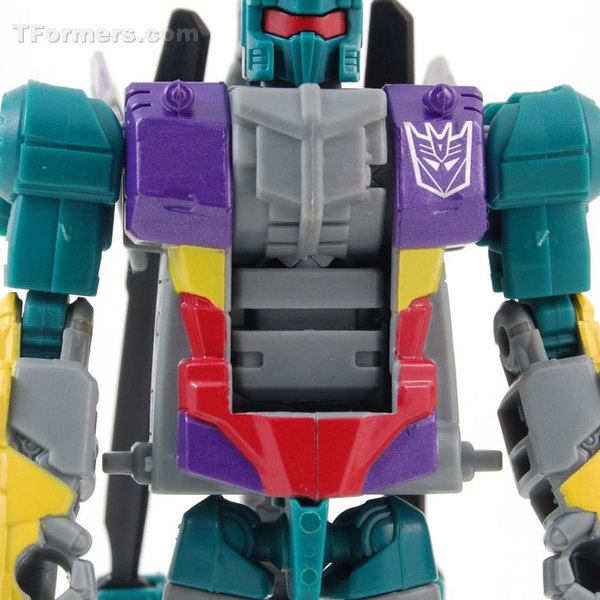 The yellow missiles on the arms are also trying to emulate colors provided by stickers, but end up kind of an eye sore. 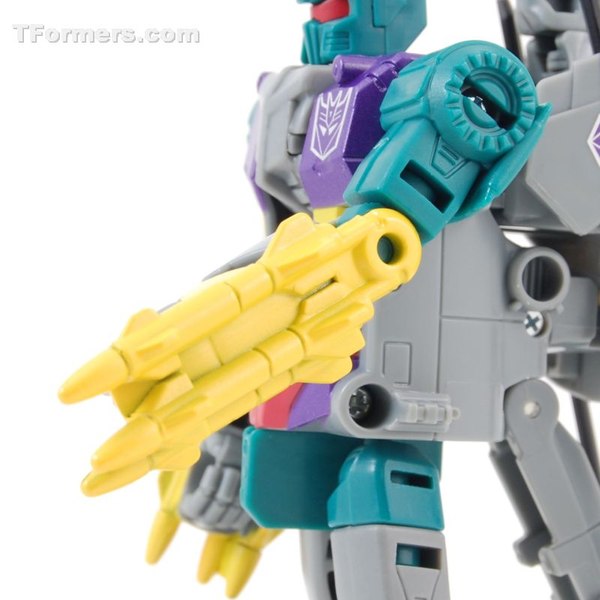 Look at it this way, get rid of the yellow and red, and you have a solid color scheme. The grey, purple, and teal fit together in a way that works well for me. If that would have been left alone I think the result would have been very nice. Adding the red and yellow on top of it makes things busy and the colors don't fit in. It wrecks the look. 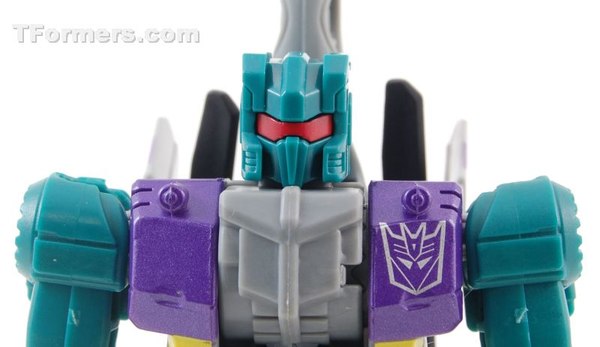 Vortex has decent plastic tolerances for the most part. The legs are about as good as Alpha Bravo's, and in spots maybe even more pleasantly smooth. But the arms have taken a bit of a bad turn. The elbows are just a bit too tight now, causing two problems. One clearly is that they're hard to move. The right arm even appeared to be stuck when I first opened the toy. The other problems relates to this. The teal plastic seems to be pushing out on the forearm just a bit. Just enough to give it stress marks within minutes of being taken out of package. These pieces are reasonably thick, so I'm not immediately concerned with a break, but I am being extra careful. 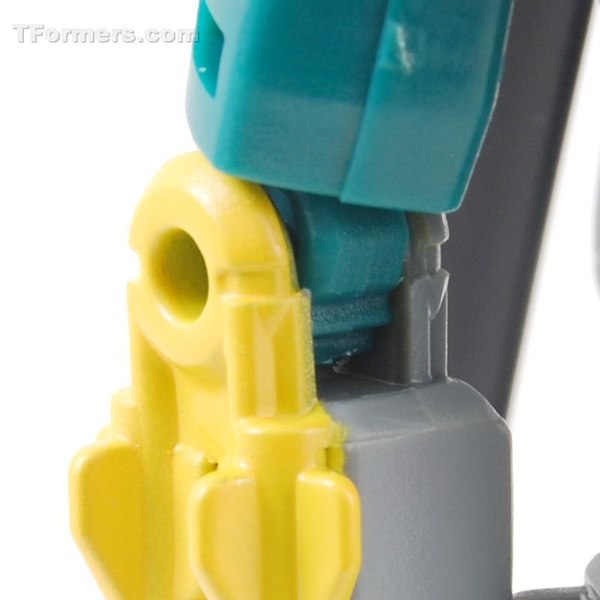 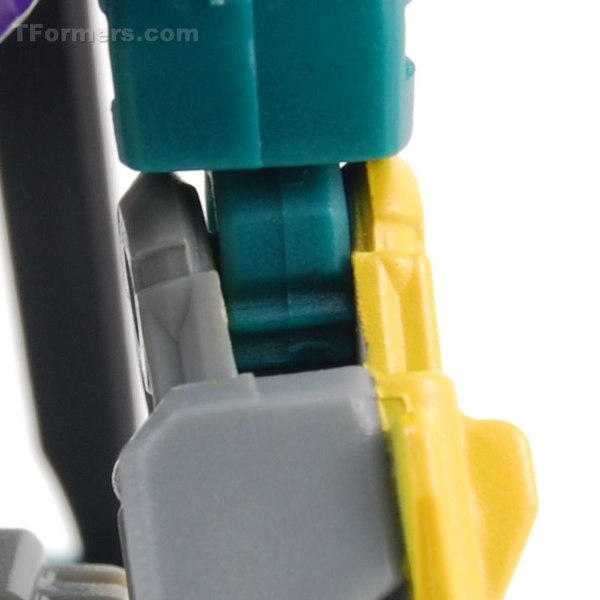 In any case, it does make me hope for perhaps some nice aftermarket replacement arms, just as a backup.

The helicopter mode fits together well, though I had a little trouble lining up the various cockpit pieces to get them locked together. But there's no loss of stability compared to Alpha Bravo once it all does come together. In that regard, there's very little to talk about for the vehicle mode. 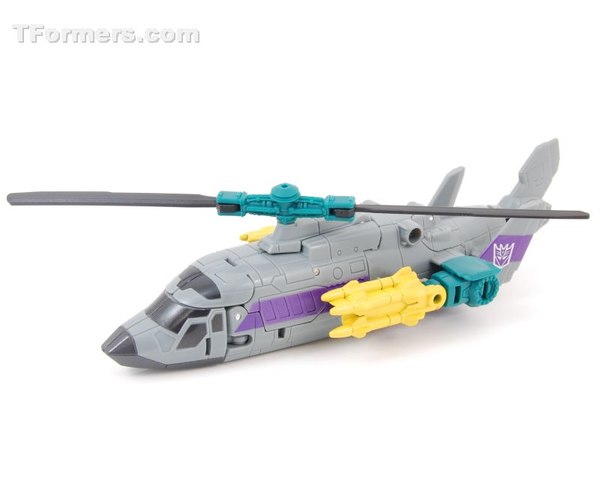 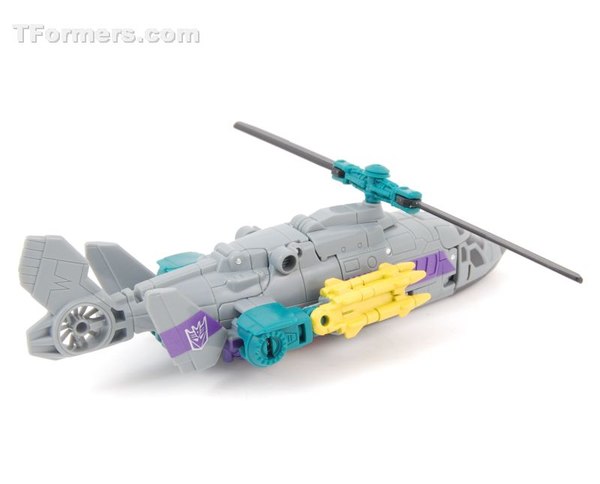 It almost escapes the deco issues of the robot, but for the yellow missiles. Sadly, if you just cover that up, you can see the rather pleasantly subdued deco that could have been if the yellow was left off. Pity. 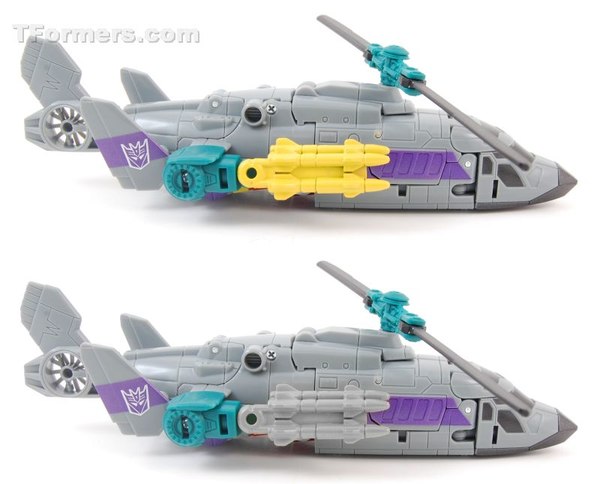 The combiner extremity weapon is a very very difficult fit in the ventral port. It can go in, but it caused lot of stress lines doing so, and made a disconcerting pop noise when removed. The rifle is a similar experience in either that port or the two on the sides. And that doesn't surprise me. 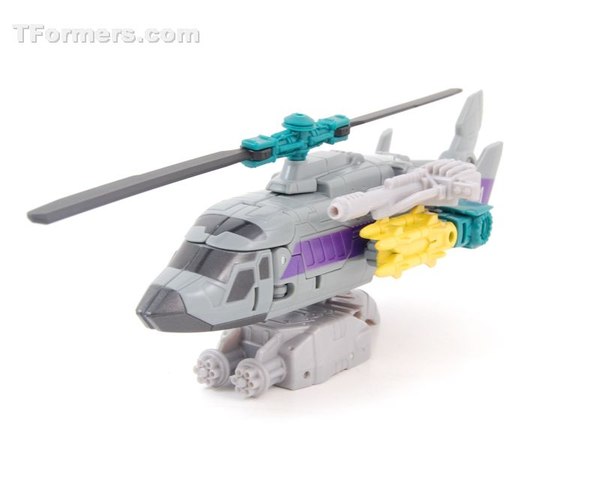 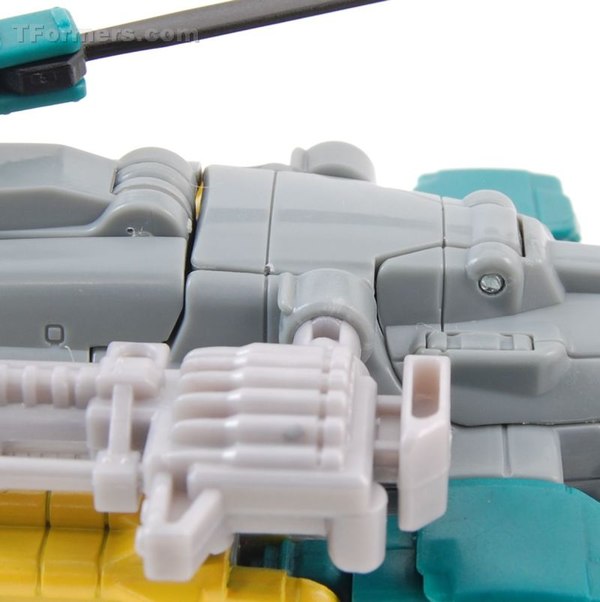 The gun and the combiner piece are from the same parts tree, and this grey plastic is probably the tiniest bit bigger than intended. 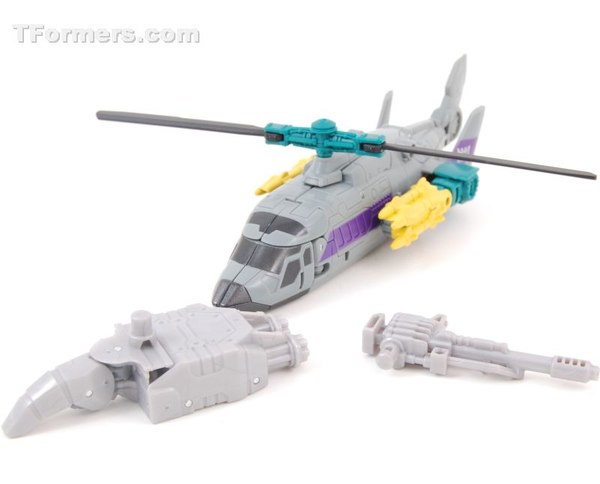 Fortunately the gun can be placed in the hand without a problem, and the hand/foot/gun can plug in the ankle/wrist port just fine too. 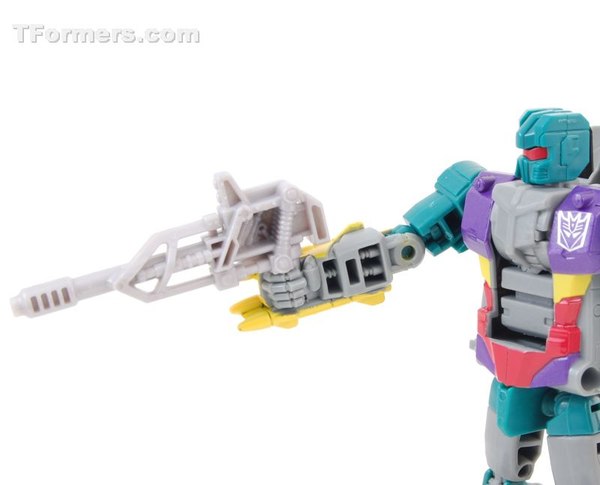 The combiner modes have no problems themselves. The leg is really hard to mess up anyway. 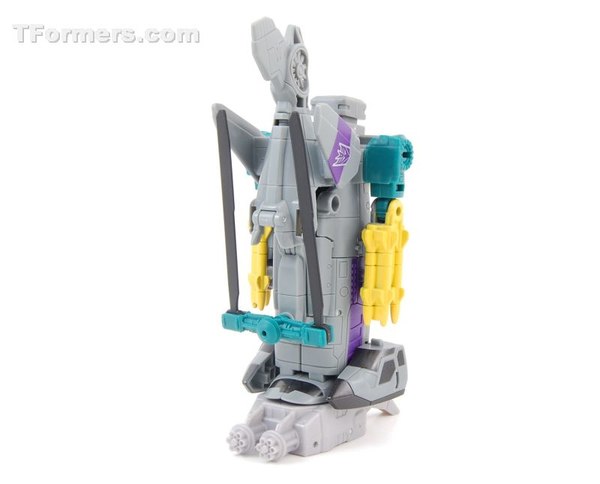 And the arm has a great deal of joint strength so bearing weight won't be any trouble, such as when you add Shockwave's gun mode to the mix. Or an Insecticon! 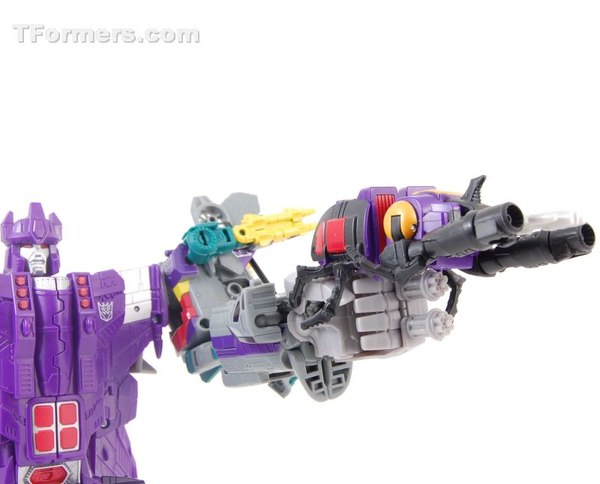 Vortex is troubled more I think by being a simple recolor than it is by the moderate plastic tolerance issues. That's something that additional production batches could account for, but it's always going to be this mold no matter what. How much you're able to accept that and see past Alpha Bravo wearing this shape for so long will definitely impact your appreciation for Vortex. As for its own execution, the only really worrying problem it suffers is those tight elbows. It's something I'm going to be mindful of, and suggest you do the same. It may amount to nothing, but a little caution never hurt. At the end of the day, Vortex is still a helicopter. Despite the implications of that in Combiner Wars, it's what it's supposed to be. Not everyone manages to have that going for it...