So, in between the Deluxe Combaticons and the Voyagers, the first Legends assortment for the 2016 product year turned up, so during our Combaticon intermission we're gonna take a look at some of these guys. I'm starting with Buzzsaw because I think he's really the most important out of this set. Buzzsaw is a Titans Return toy, as it's the first released Legends figure designed to interact with the docking bay on the Leader Blaster and easily presumed Soundwave that will follow. 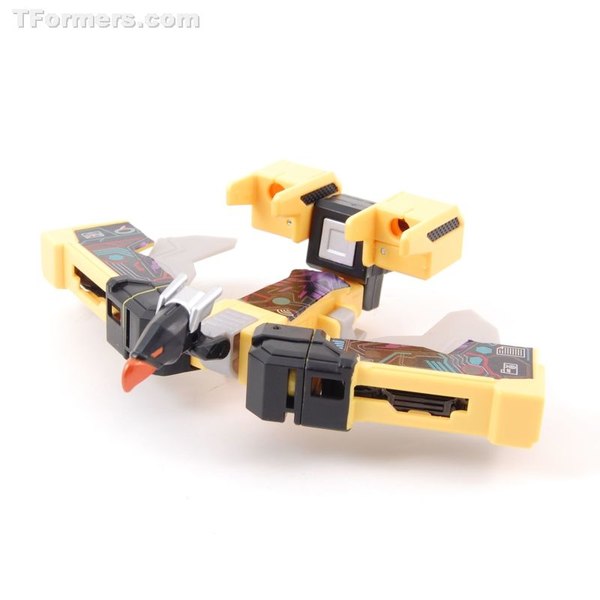 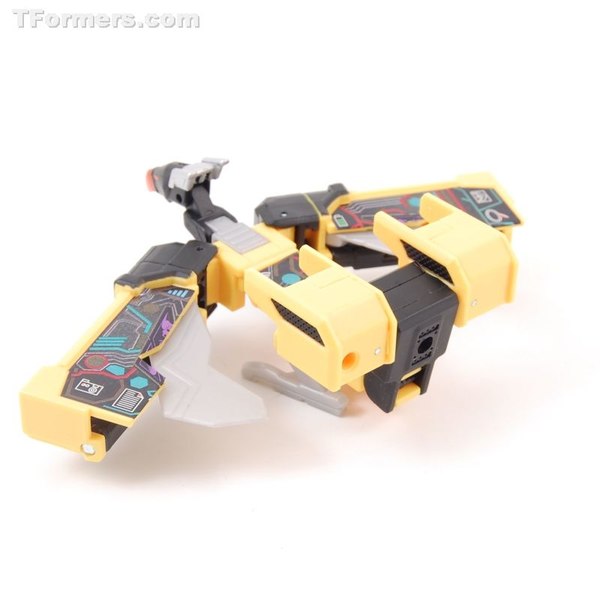 The last time we had an attempt at uniform alt-mode partner toys for Blaster and Soundwave was the Fall of Cybertron data discs, and while they were a very interesting gimmick and approach, well, they didn't age well. The first thing that's clear about Buzzsaw is a greater degree of complexity. Or rather, useful complexity. Being spared auto transformation helps a lot. 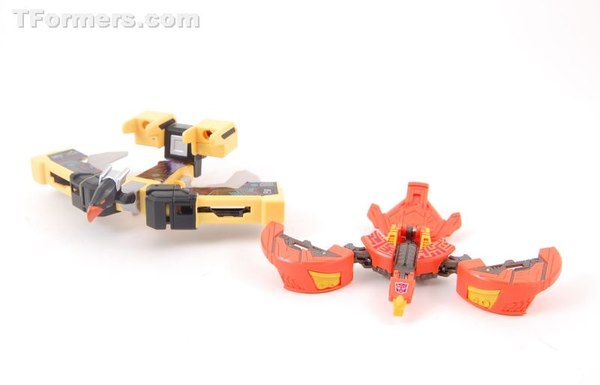 So Buzzsaw has useful poseability at the shoulders, surprisingly enough. Twisting the swivel and folding the wings back gives an actually pretty good emulation of an at-rest posture for a bird, which is already more than I was expecting out of this. 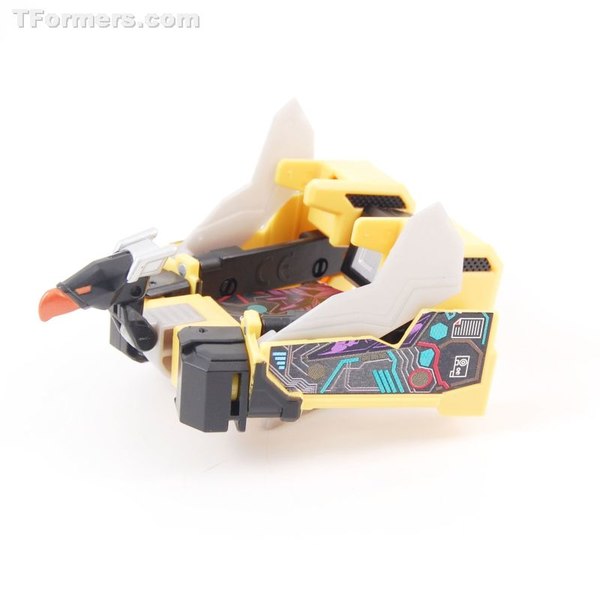 The neck has two hinges giving a lot of range of up and down movement. Absent is a side to side swivel, though it doesn't feel like you're missing it in general. There's a third hinge for transformation that you can use here, but I don't know why you would need to. The feet are functionally immobile. They have transformation hinges, but to absolutely no helpful effect. I do wish the legs had some poseability so the overall posture of the bird mode could be altered. There's plenty to work with along that line already, swiveling hips are about all that's lacking to get that. 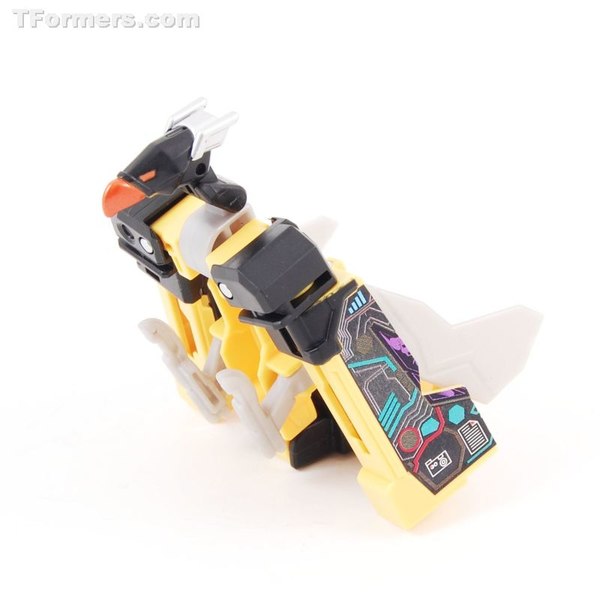 Buzzsaw is made from a required uniform base shape, so there are compromises in the styling. The wings are never going to be convincing. They have these flaps that extend out to try to make them look more plausible, but you still need to really squint hard to not see those huge blocks. 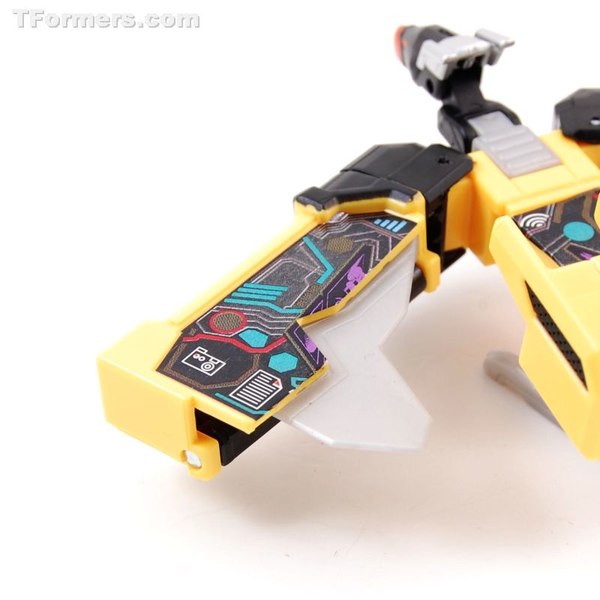 The core body isn't awful, maybe a little skinny, but there's nothing specifically bad or wrong to it. 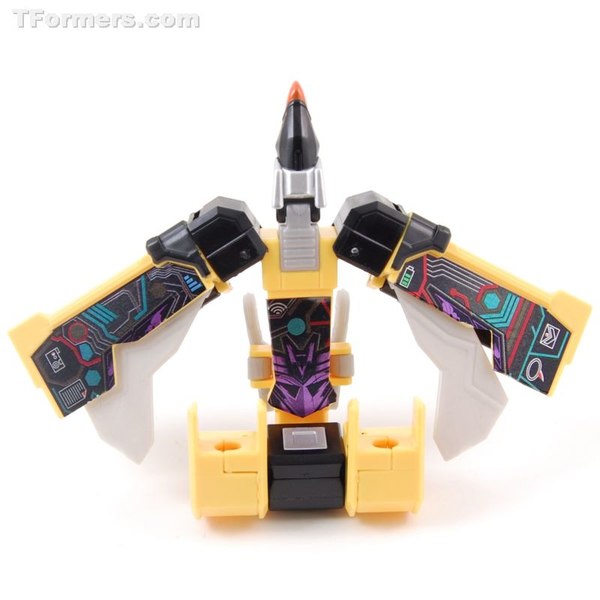 And the head is actually pretty decent. As the roughly one part that doesn't have to be involved in either other mode, it can go the whole way in being bird. 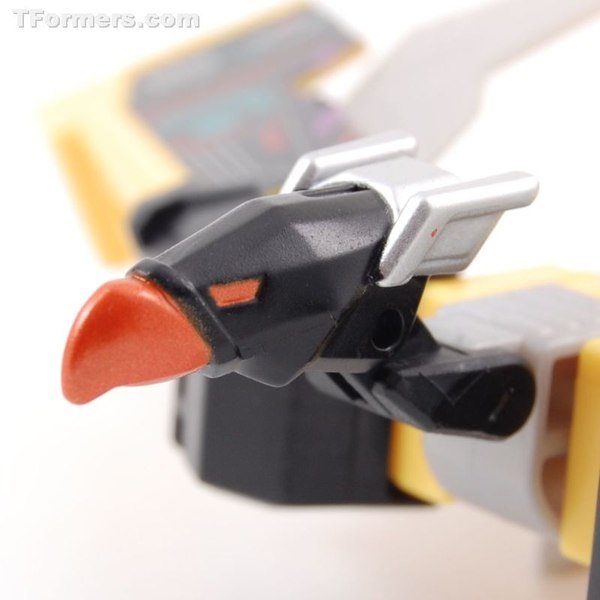 The tail is what comes out worst for me. The instructions tell you to have it like this. 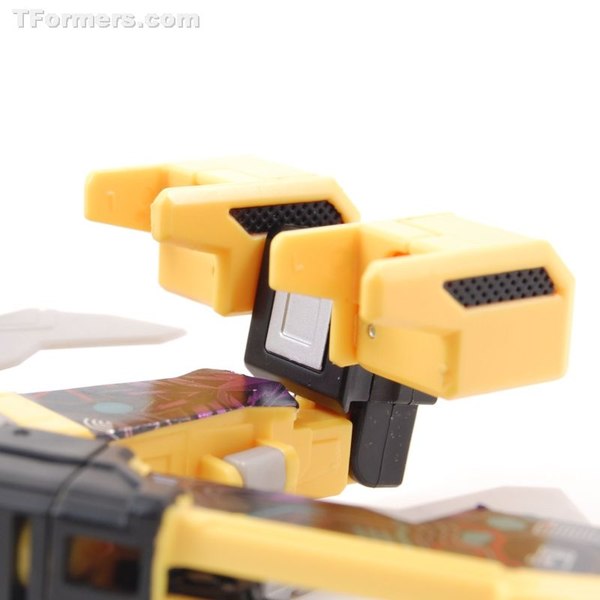 I imagine it's to try to emulate the shape of the boosters on the G1 toy. But besides being blocks in the vague area of the bird's back, I'm not seeing it, and I think it looks bad.

In package, Buzzsaw comes with these parts down. Like this, it looks more like a tail. And actually... 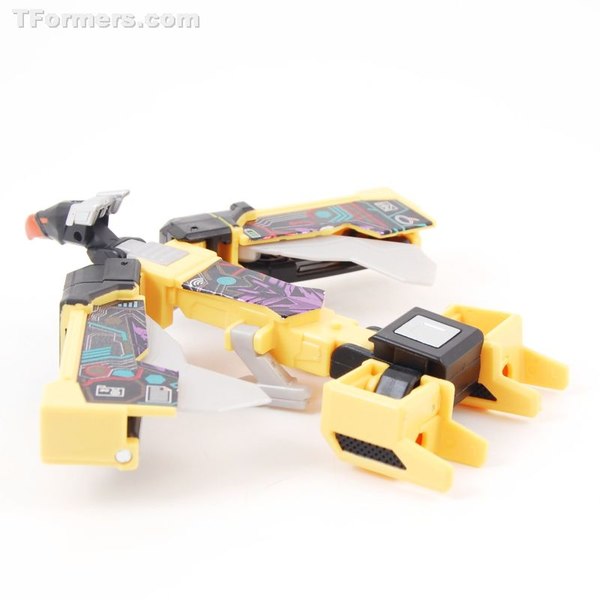 If you turn these up, it can look even more like a bird's tail. For me at least this helps improve the look of the bird mode. It gets sleeker and has a more readable body shape. 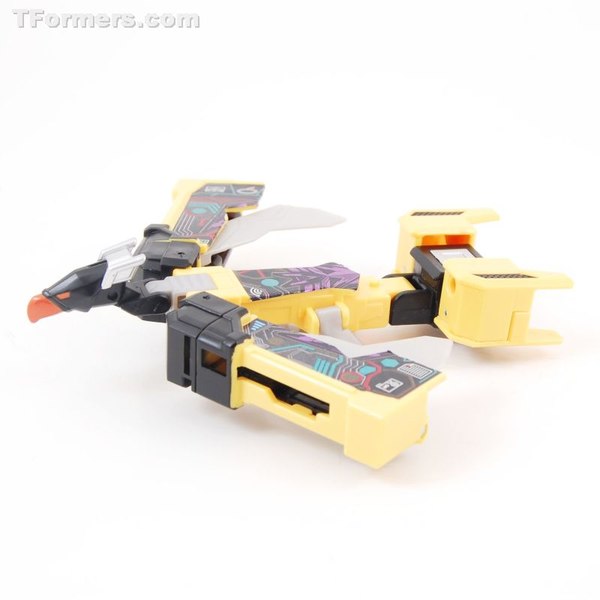 You could even fold it back up but otherwise keep it arranged this way and it's better. Basically I think they picked the worst possible configuration of those parts to be the official transformation. 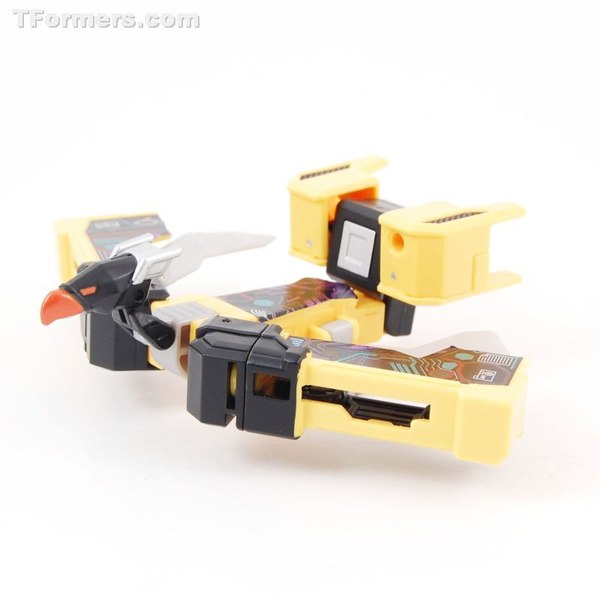 Speaking of which... This is Buzzsaw's tank mode. No, really. Okay, you know what? You're right. This is pretty irredeemably dumb. But they had to have this here, and for two reasons. Even if no other figure of this type would have a mode like this (and we know they do), Buzzsaw had to because it's first and has nothing to directly interact with. The conceit of a self-capable vehicle mode is kind of needed for marketing. 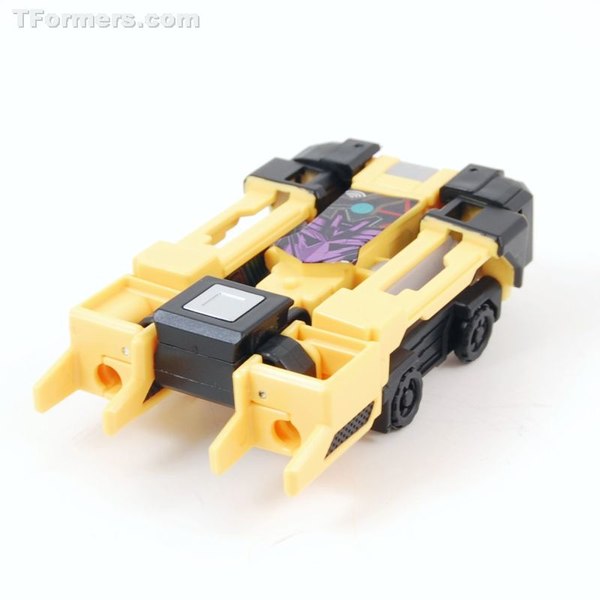 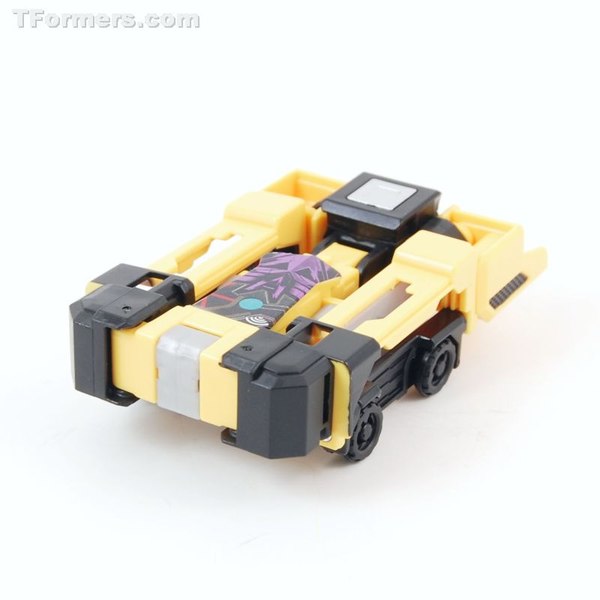 The other reason lies with this tiny little peg. That's where a Titan Master will stand one day as it uses Buzzsaw as a chariot to ride in to battle. Or something. But this is how this price point will fit in the bigger Titans Return play pattern. 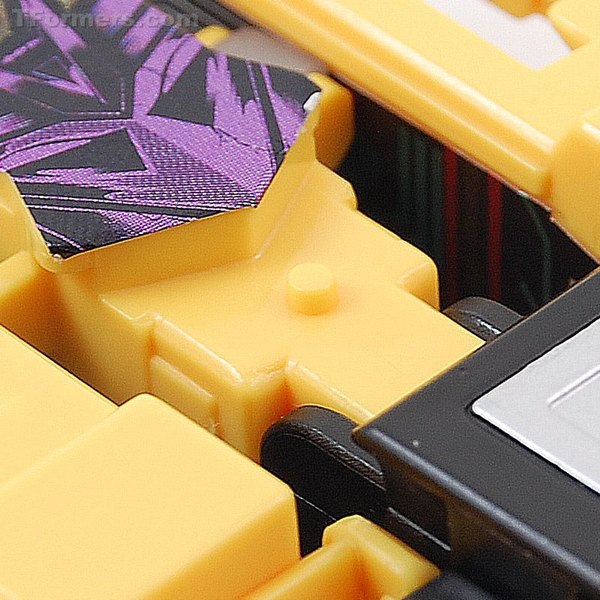 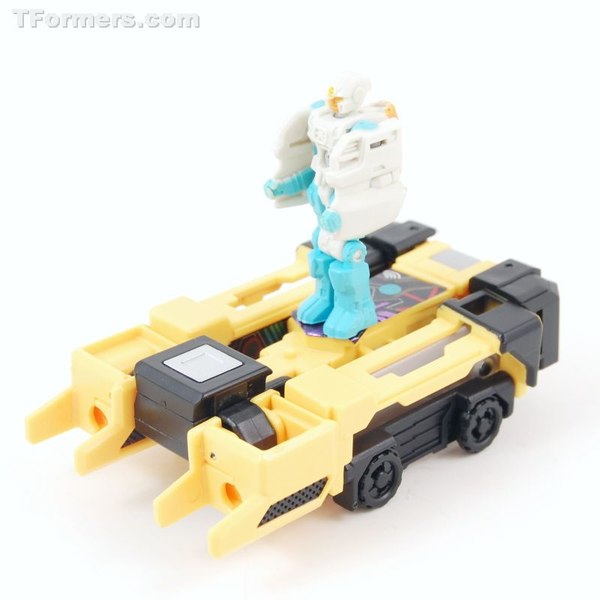 Buzzsaw is a box with wheels, wheels which do roll, mind you. But yes, it's a box. A box with forks on the front. Look, I said I get it, I didn't say it wasn't still dumb in execution. Let's move on. 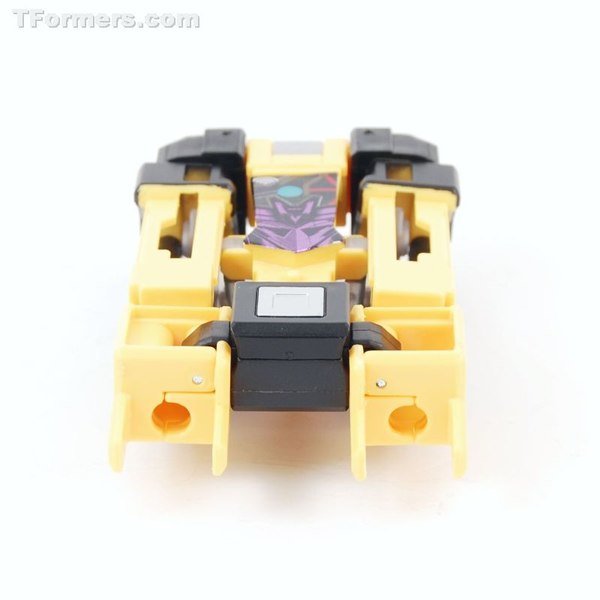 And this is the spy tablet mode, the basic blueprint for what a lot of Legends are probably going to be as we go through 2016 and in to 2017. It's a box. Without wheels, because we put those away a moment ago. The general outline is to look like a smartphone or tablet inside a protective case. Which apparently also makes it about four inches thick if we assume that as a tablet it'd be something like one-quarter scale. It's a VERY safe case. 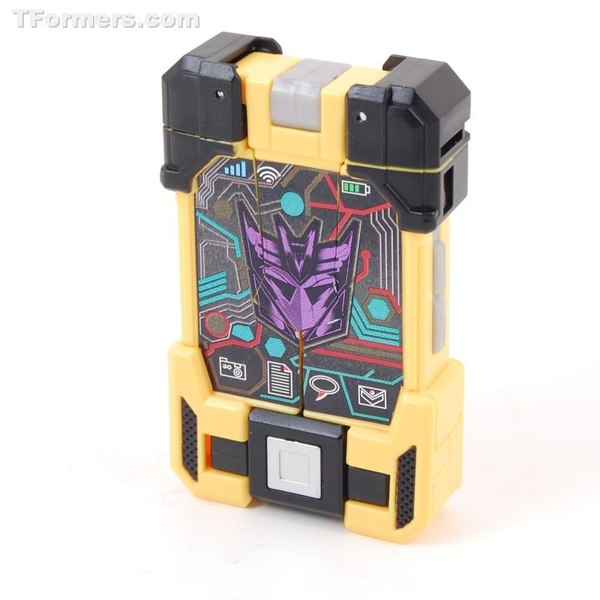 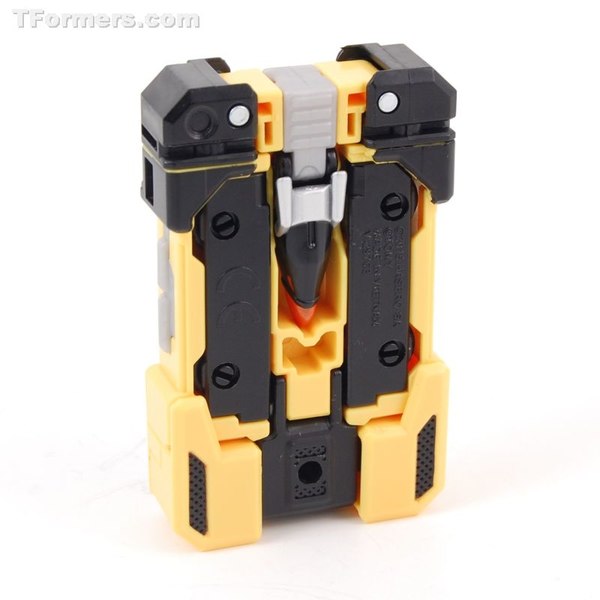 There's speaker details in the corners, and a big home button in the middle. 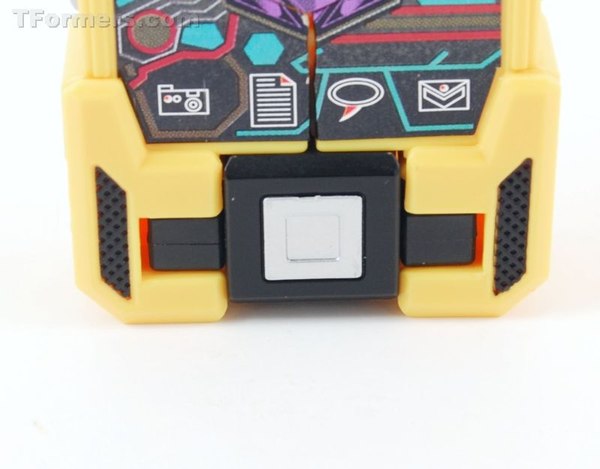 There's buttons on the side from where the bird feet poke through, which I think is a really good way to get those to be distinct and separate looking without adding more parts. 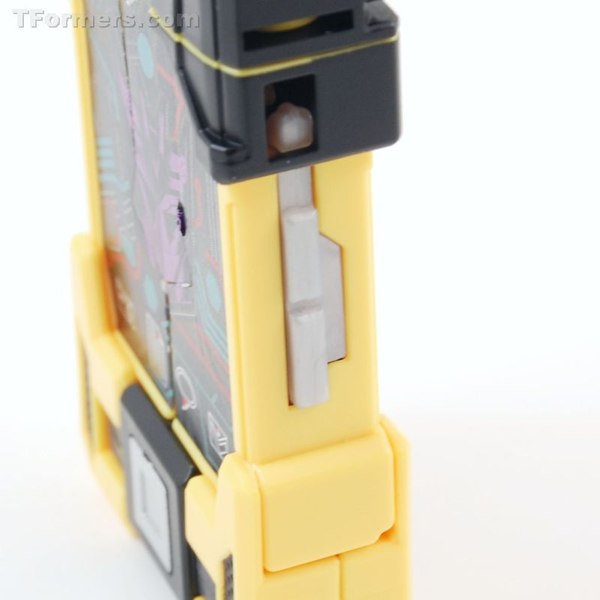 And this port does nothing expect fit a real 3.5mm headphone plug. Neat bit of unnecessary detail! 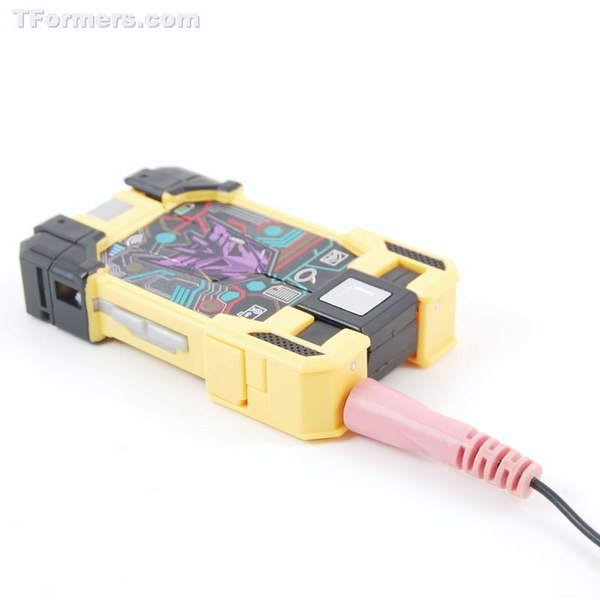 And there's even a little circle indentation on the back to be the camera lens despite no other specific device details on this side. 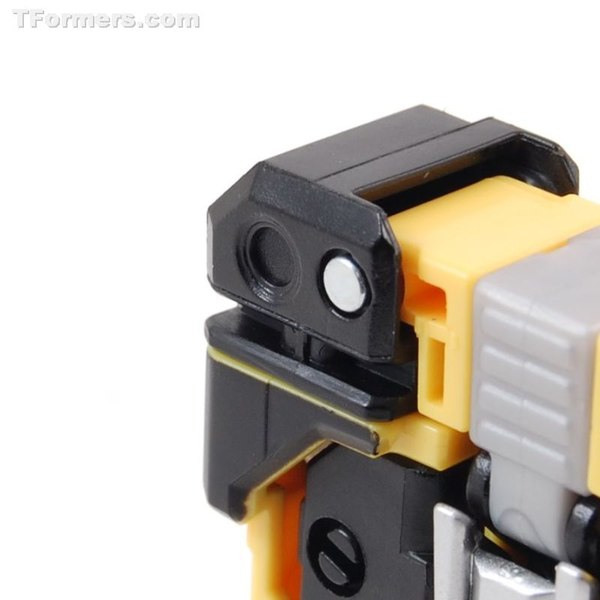 So let's talk about the foil paper elephant in the room, the screen stickers. It's complex detailing, so I don't mind that they opted for stickers to make it work. They printed function detail like battery levels, signal meters and that kind of thing. And the circuit pattern and Decepticon insignia is intended to be the wallpaper. No problems there. 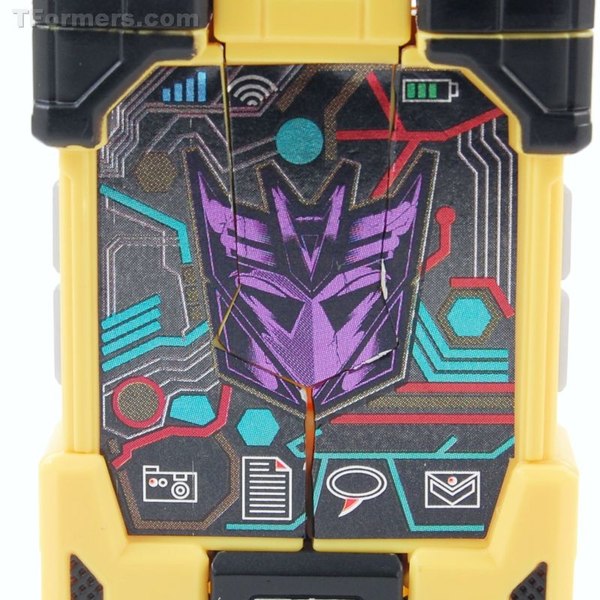 Problem is materials. First I don't like how shiny reflective the stickers are. I can assume that's to imitate a glass screen, but it more just hides detail. A more matte finish would I think serve the toy better. 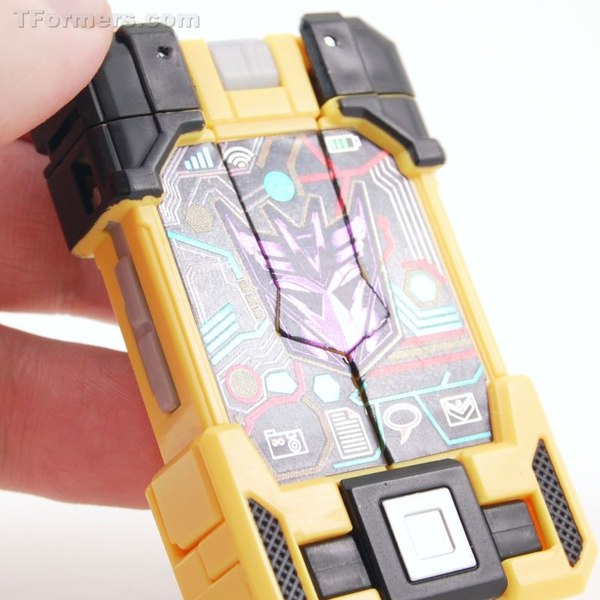 Problem two falls with durability. These stickers are very thin, and have edges right where parts have to make extremely close passes during transformation. Some edges are already starting to come up, and at the time of writing I've had Buzzsaw open less than a day. It makes me worry about how long these stickers can really be expected to last. On the plus side, they do mostly line up tight, and the dark colors obscure the seams pretty well. 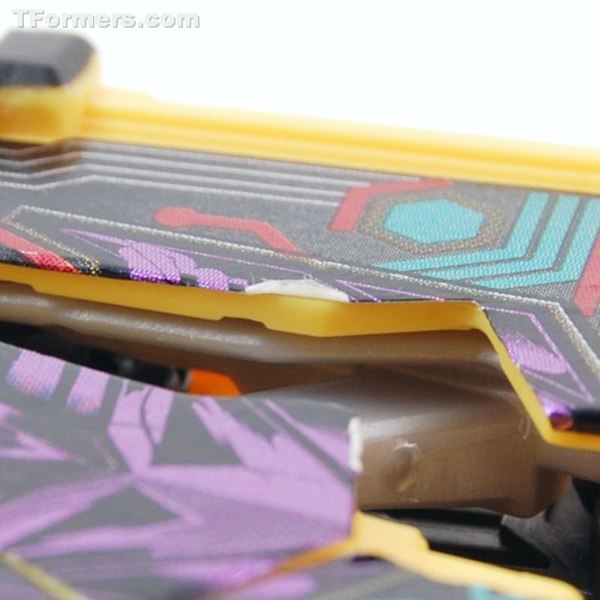 The general deco is certainly passable. Between the plastic and paint colors you have a very solid Buzzsaw look, and there's not obvious detail that comes off as being missing from the paint apps. If I were to change anything, I'd probably have the bottom corners in black, and make the speakers silver, just to match the opposite corners.

Buzzsaw comes with no accessories. In a world with more budget freedom it'd be cool to see a set of earbuds or something that take the place of the boosters in bird mode, but we all know that would never happen.

Having spent time with Buzzsaw now, I find that more than anything, I'm very interested to see the subsequent figures of this type. I want to see how different body styles end up working while constrained to an alternate mode of the same shape and size. Those are things I find interesting based on the engineering challenges they represent. Buzzsaw isn't exactly perfect, but it's good enough to make me want more.

Honestly, Buzzsaw is actually not bad for a first try at this. I like that we can take another pass at the same line of thought as those data discs, but not repeat some of the decisions that may ultimately have hurt those toys. Buzzsaw feels more capable of being an independent figure, and no small part of that is due to having useful articulation in its robot mode. It carries it across the gap between glorified accessory, and action figure. The rolling box mode isn't doing it any favors, but I get the thought process that led to it, and the linewide play pattern it has to support. It's amazingly not hurting the toy any by being there, so at worst it's just easily ignorable. I think Buzzsaw is pretty good. It presents a lot of promise, and I'm looking forward to seeing how that gets carried through farther down the line.